Mount Outram, which sits just to the west of E.C. Manning Provincial Park, had been our on to do list now for a number of years. We had read quite a few trip reports that state it’s a really good hike but to be prepared for a long day with some serious elevation gain. In fact, one can expect an 1800 meter gain over 9 kilometers! With that in mind, rather than tackle the hike in one day, we opted to head up to the alpine and to camp for the night prior to heading to the top in the morning.

Access is good as one can park in the parking lot at the west gate access to the park. Just look for the massive marmot sign and that’s the place to pull in. Sometimes it’s nice to just park and hike and not have to bump along for hours along a forest service road to reach the trailhead. For this trip, we wanted to escape the incredibly smoky conditions in July of 2017 we had been experiencing for weeks in the interior due to the numerous wildfires. A check of the DriveBC webcams seemed to show that conditions were very clear in the area so it seemed as good as time as any to hike Outram.

Fortunately it was much cooler in the area with the thermometer reading a mere 24 degrees when we hit the trail so we were quite relieved that it wasn’t 35 outside like it was in Kamloops when we hit the road. And once we were in the trees, we found the temps hovered around 20 which made for a pleasant hike. 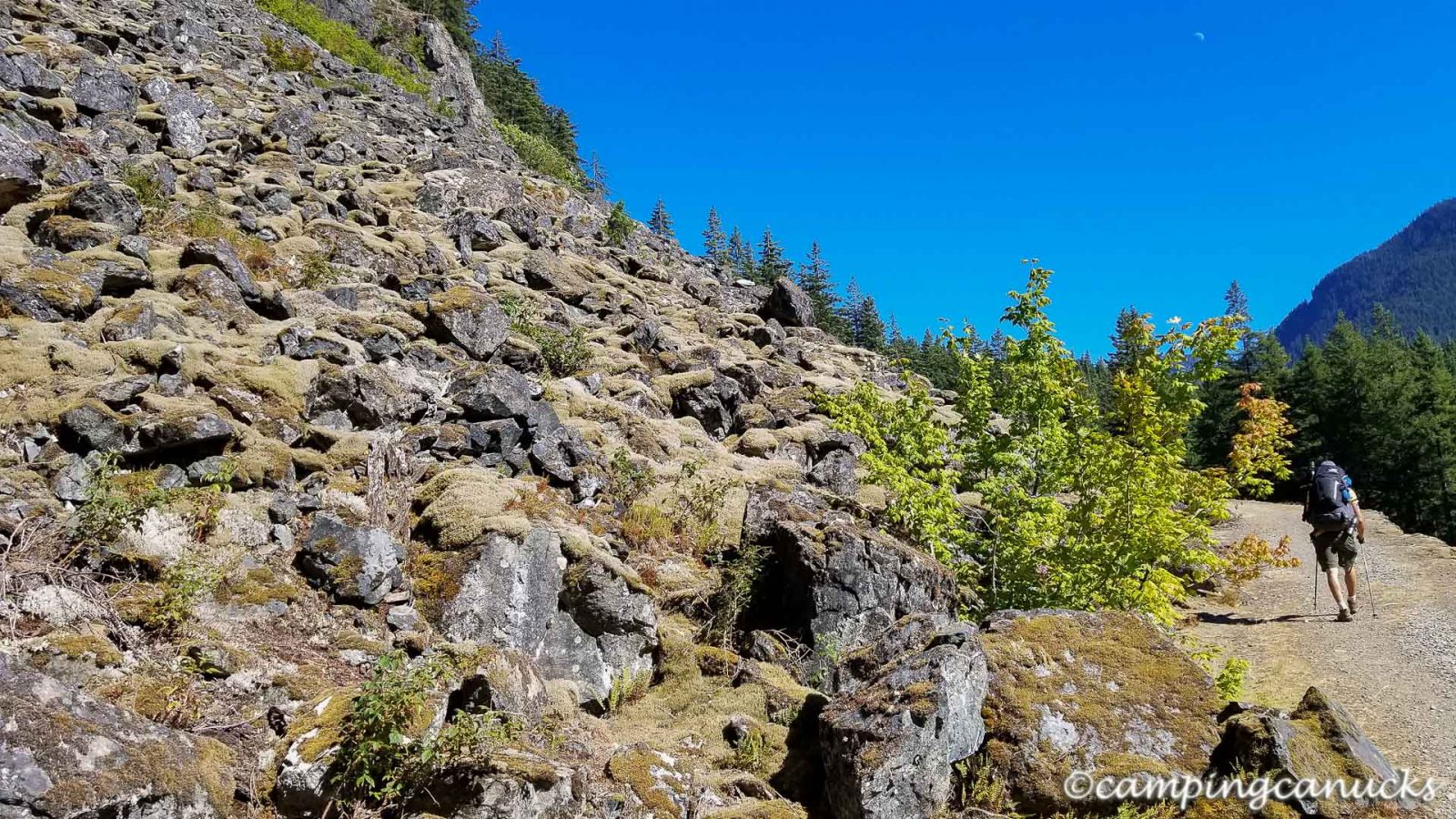 A stretch of the old Engineer’s Road

And that’s how it goes for the next eight kilometers; a slow and steady climb with few breaks and only the occasional views of anything except the trees around you. With a few breaks for some food and water, we found it took us three and a half hours to reach the meadow where we intended to camp for the night. And luckily, we encountered very few bugs until we actually got to our camp. Once there, however, we were swarmed and I was not unhappy to have brought a mosquito head net along. 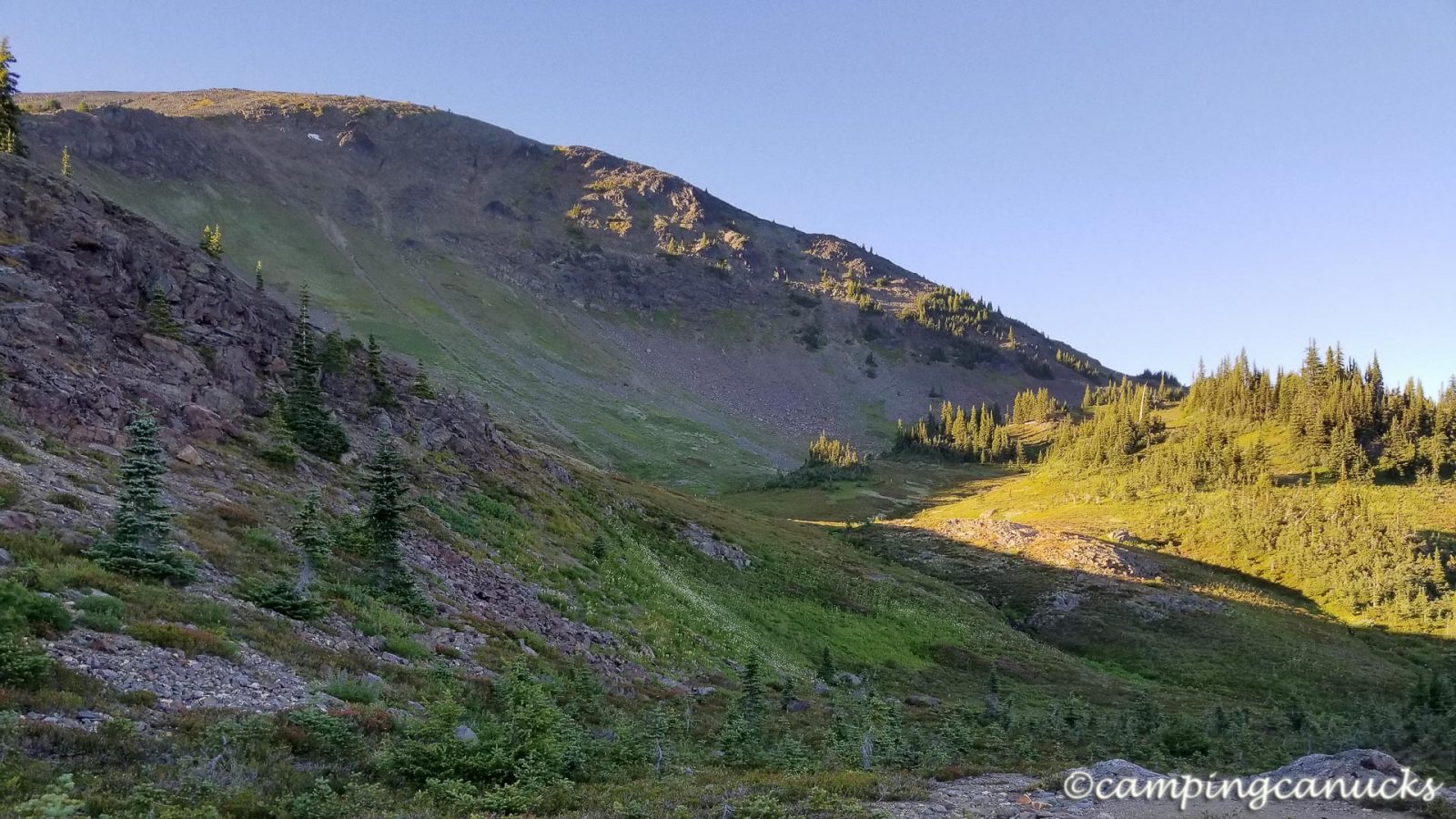 Reaching the meadows around sunset

We were definitely a bit footsore at this point, so we quickly setup our tent and settled in for what ended up being a surprisingly cold night with temps hovering slightly above zero. After some hot drinks and a long overdue dinner, we called it a night once it got dark and crawled into the tent for the night. 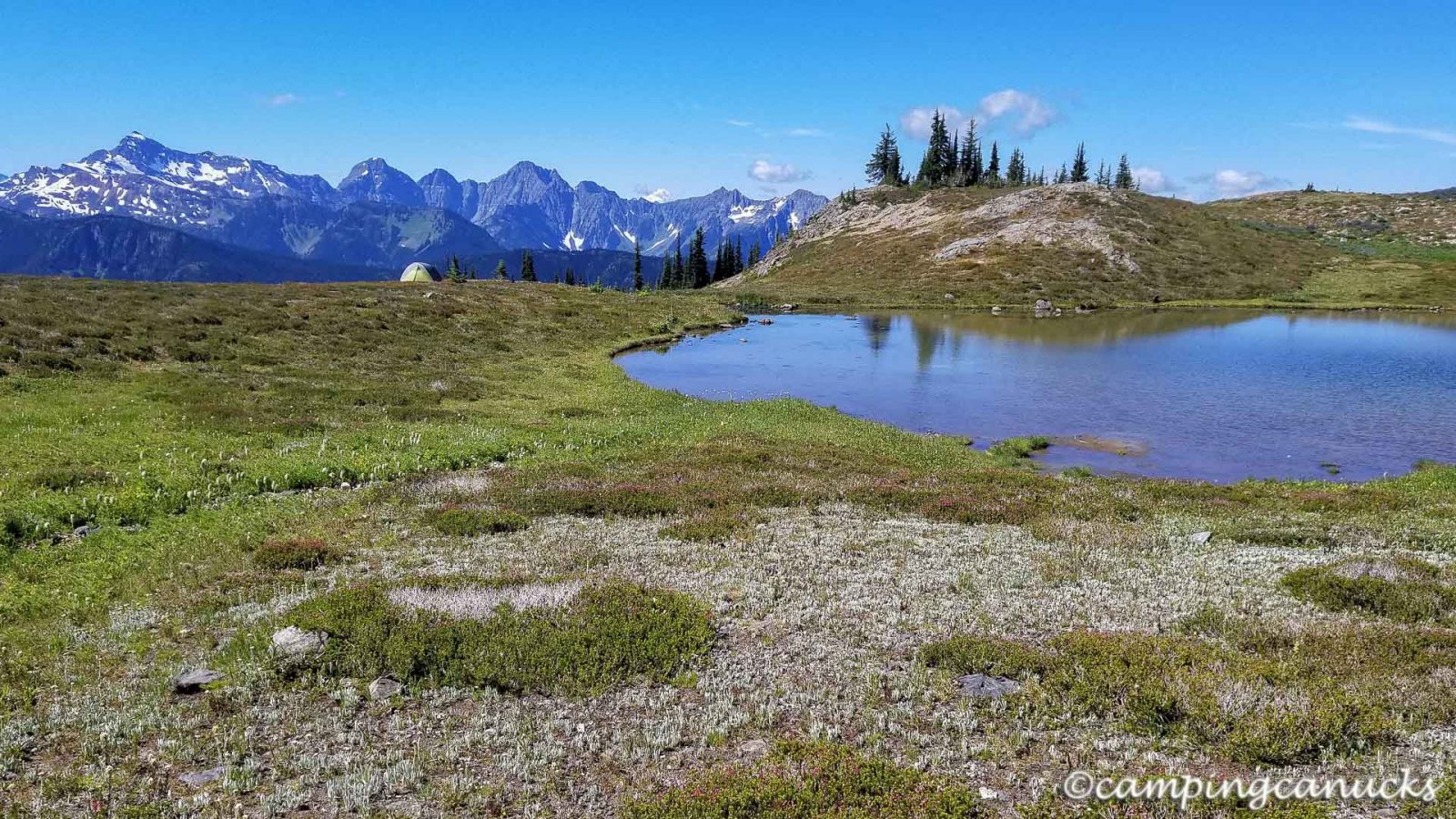 A great place to camp

We woke up early around 5am to a clear and cloudless day. Not bugless, unfortunately, but that’s life in the alpine during the summer months. 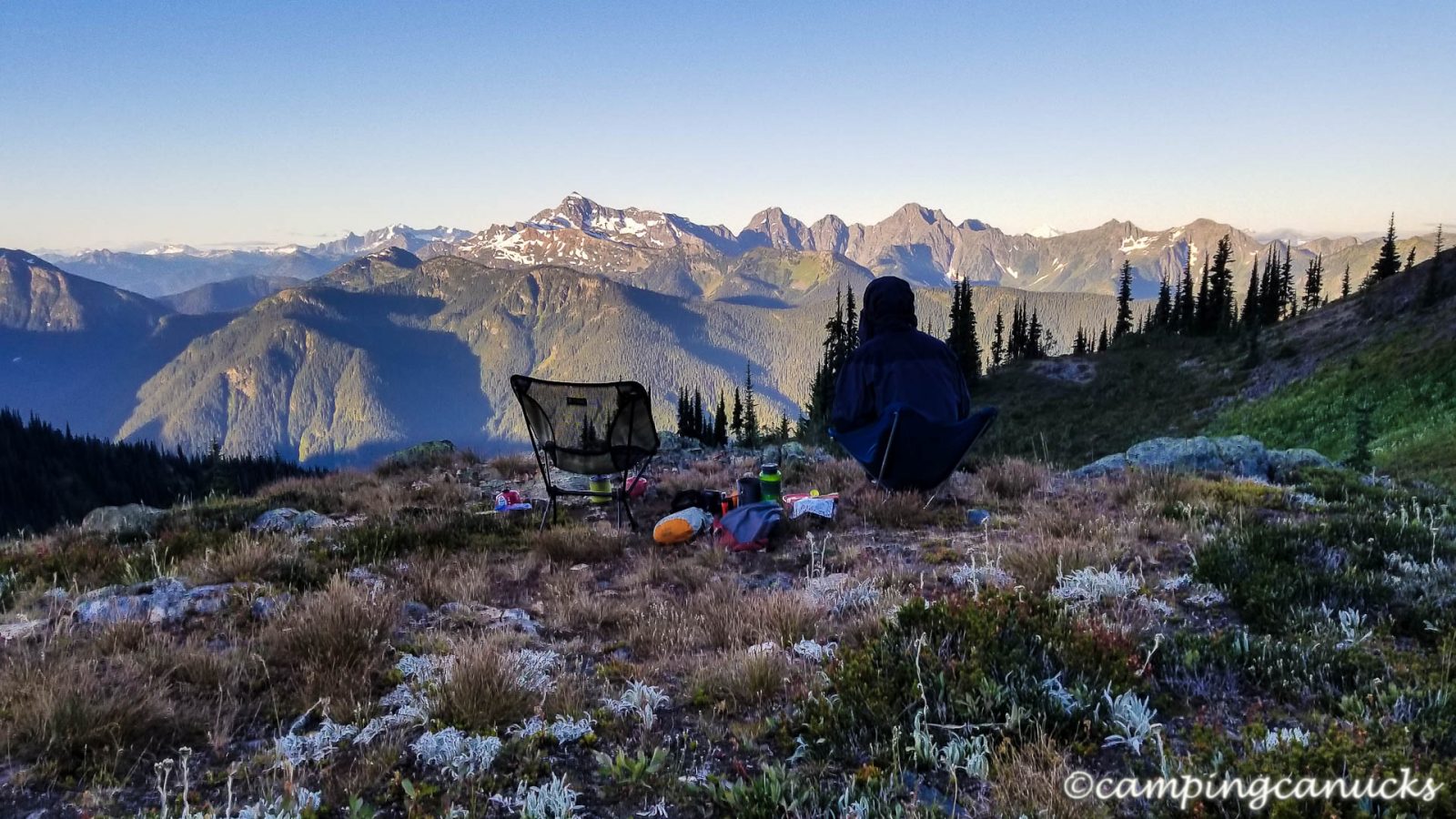 A fine place for breakfast

After a couple of hours of setting up cameras for some time lapse photography and some coffee and breakfast, we packed our day bags and started for the summit of Outram around 7.30. It was a relief to leave most of our gear at camp and proceed with just food, water, and some clothing. It was an easy and obvious path from the camp for getting to the top and we were lucky enough to catch the wildflowers in full bloom. 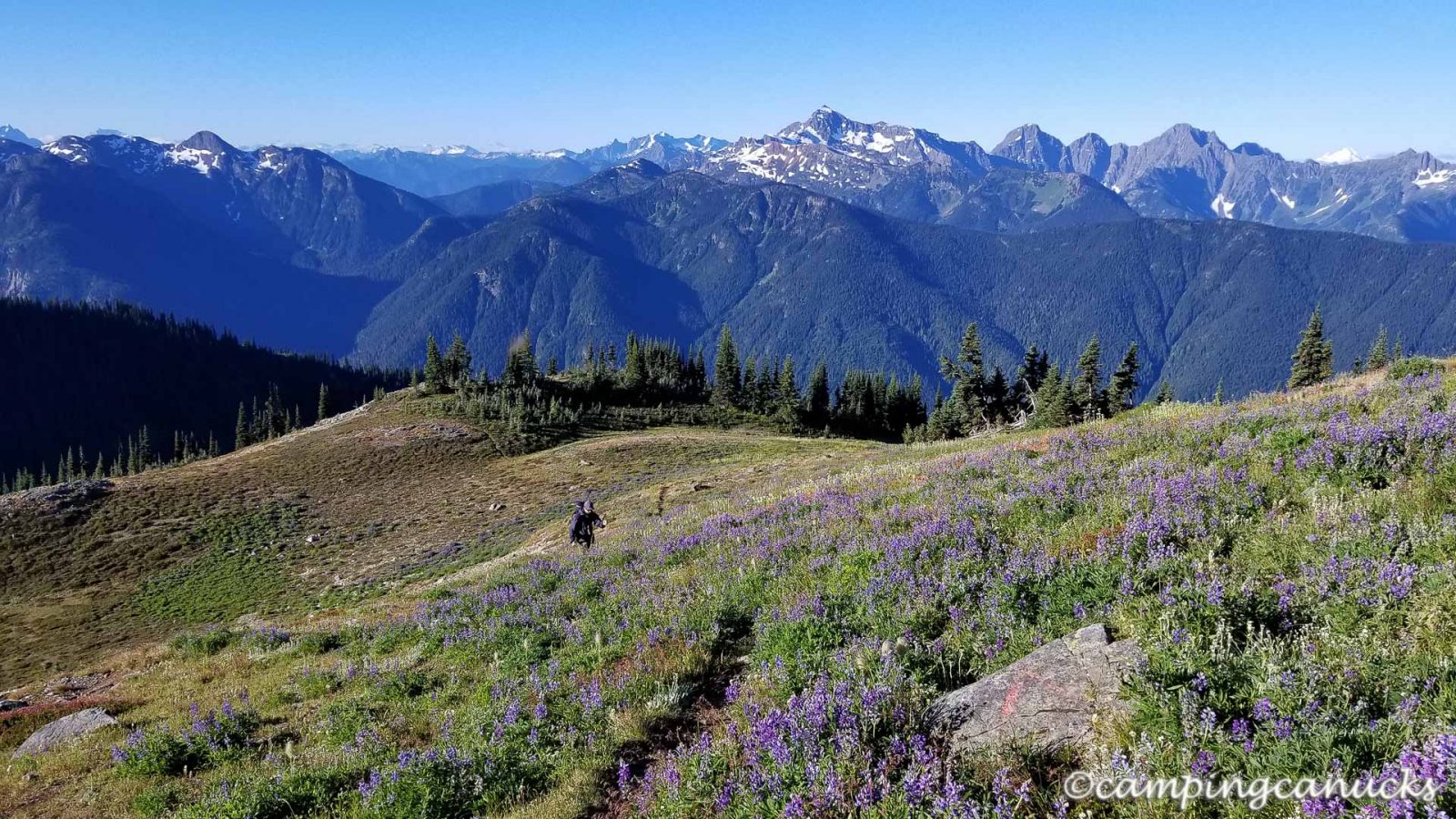 Moving up the trail

For about the next half hour, we followed the path that lead right up to the scree on the south side of the peak. From there, there was no real trail but it was pretty easy to follow the way up that others had done before. Occasionally we passed a cairn but really, once on the scree, one only needs to just keep going up. Eventually we reached the ridge that ran west of us to the summit. 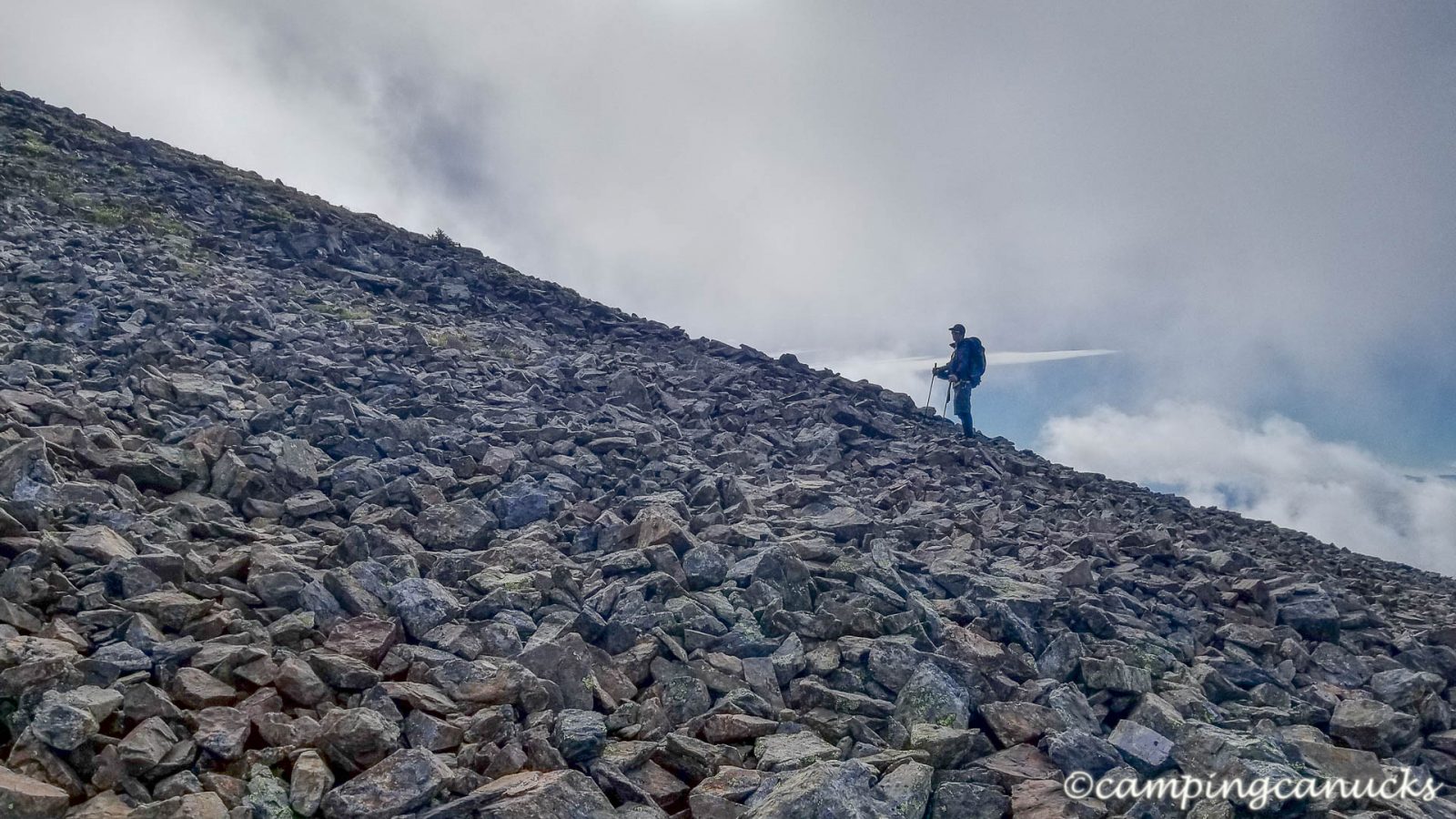 Hiking up the scree

We found as well at this time that we were running into some clouds as the sun warmed the air in the valleys below. We were never socked in or had any problems with visibility and it added a neat dynamic to the hike. 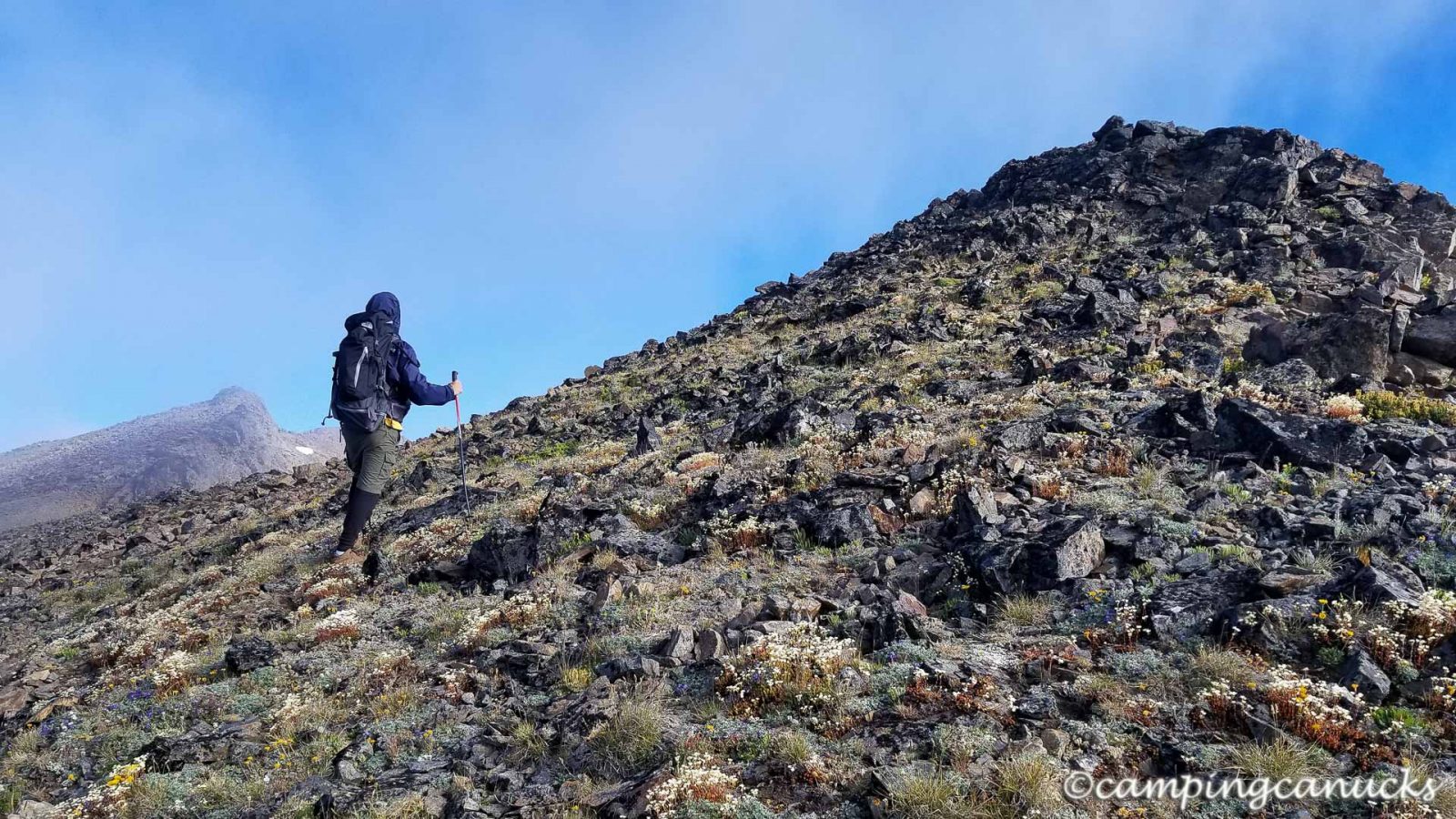 On the ridge with the summits to the left

Getting to the false summit of Outram was a mere hike, albeit a steep one, with no technical moves or exposure required. Once there, though, we did venture over to the true summit which involved a bit of easy scrambling. With dry rocks, it was pretty straightforward but in icy or wet conditions, it could be a bit sketchy. 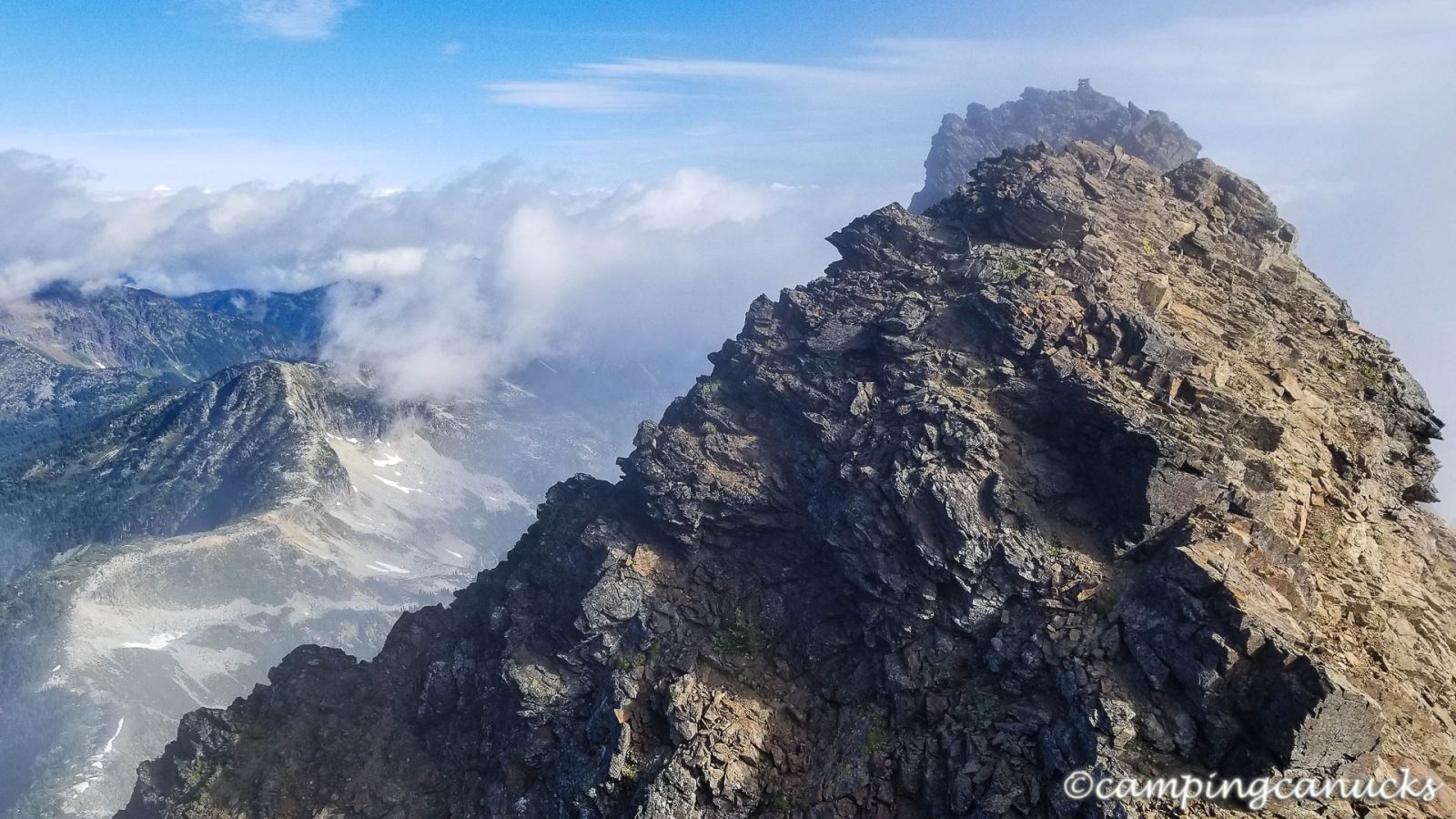 The true summit in the distance

It had taken us about one and a half hours to reach the summit from camp and it was very cold at the top despite the sun warming the air. For most of our way up, there was quite a cold wind blowing which was certainly nice to keep us cool. At the top, however, we sat below the cairn and used it as a windbreak since we spent an hour up there doing more time lapse photography. 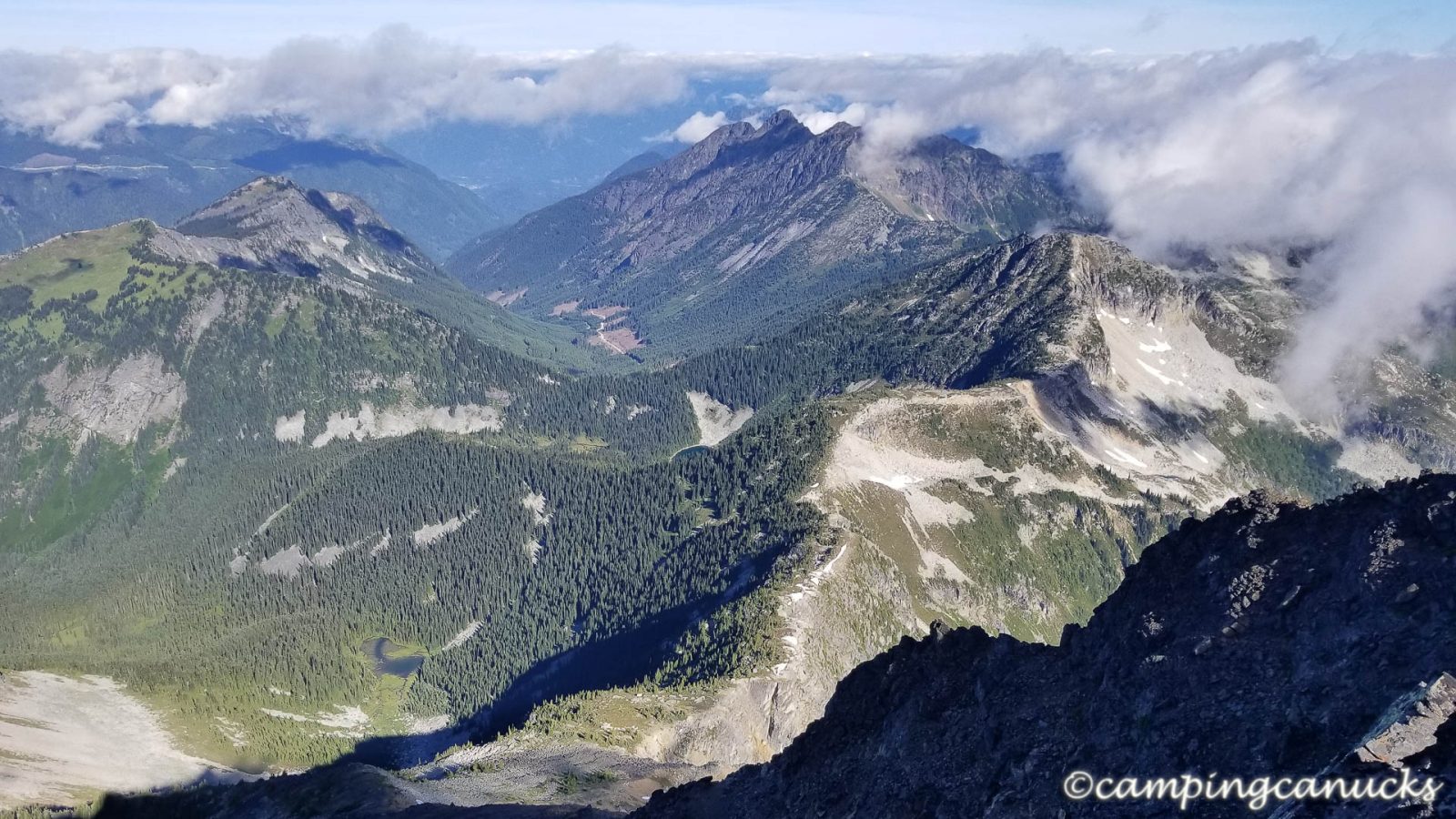 Looking west. Hope is nestled in the far valley.

On a fully clear day, one can usually have a great 360 degree view of the surrounding area. Because of how early we were on the summit, we got to enjoy watching the dynamics of watching clouds form to the east of us as the air was warming up. It made for some great photos but unfortunately, we never did see anything to the east of us and very little to the north. Regardless, I took a Google Street View image from the peak. The views to the west and south, though, were definitely stunning. 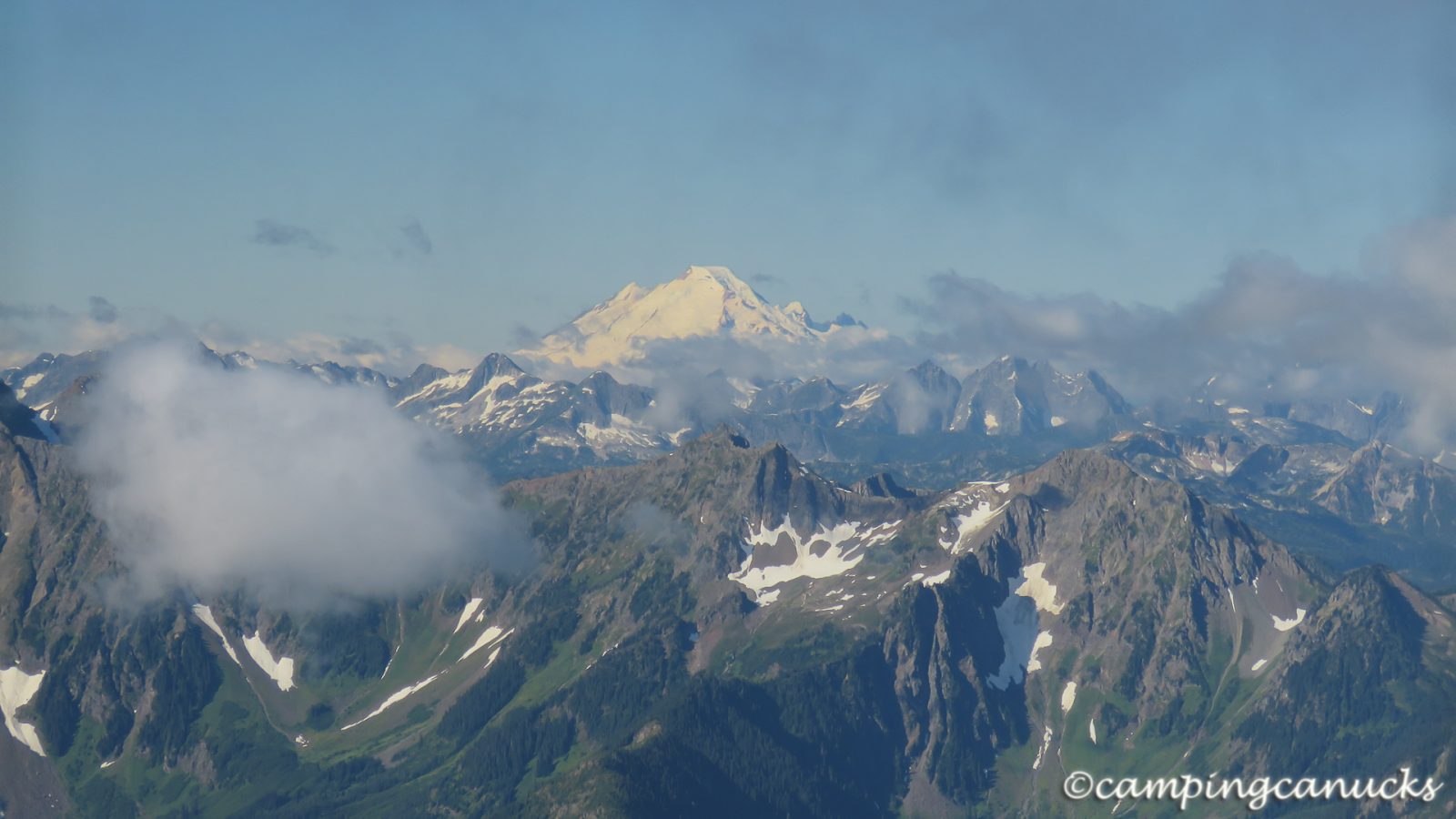 Mount Baker shining in the distance

After getting our photo fix in, we loaded our gear back up and started on our way back down to camp. This time, though, we didn’t follow our route right back down but elected to keep following the ridge to the east. 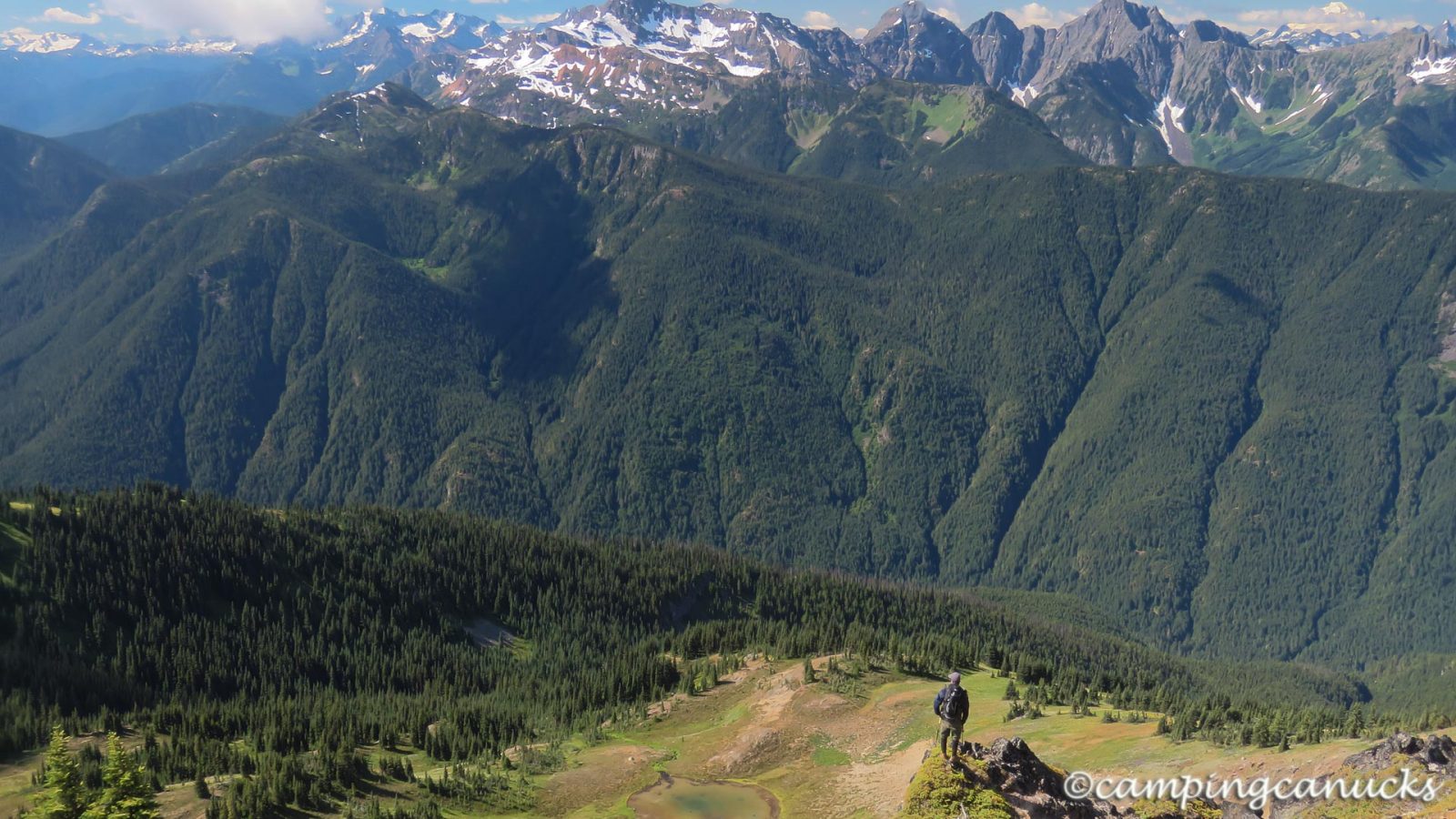 Looking south from the ridge

With a bit of scrambling here and there and traversing some scree fields, we found it made for a great loop that brought us back down on the east side of our camp, rather than on the west where we went up. 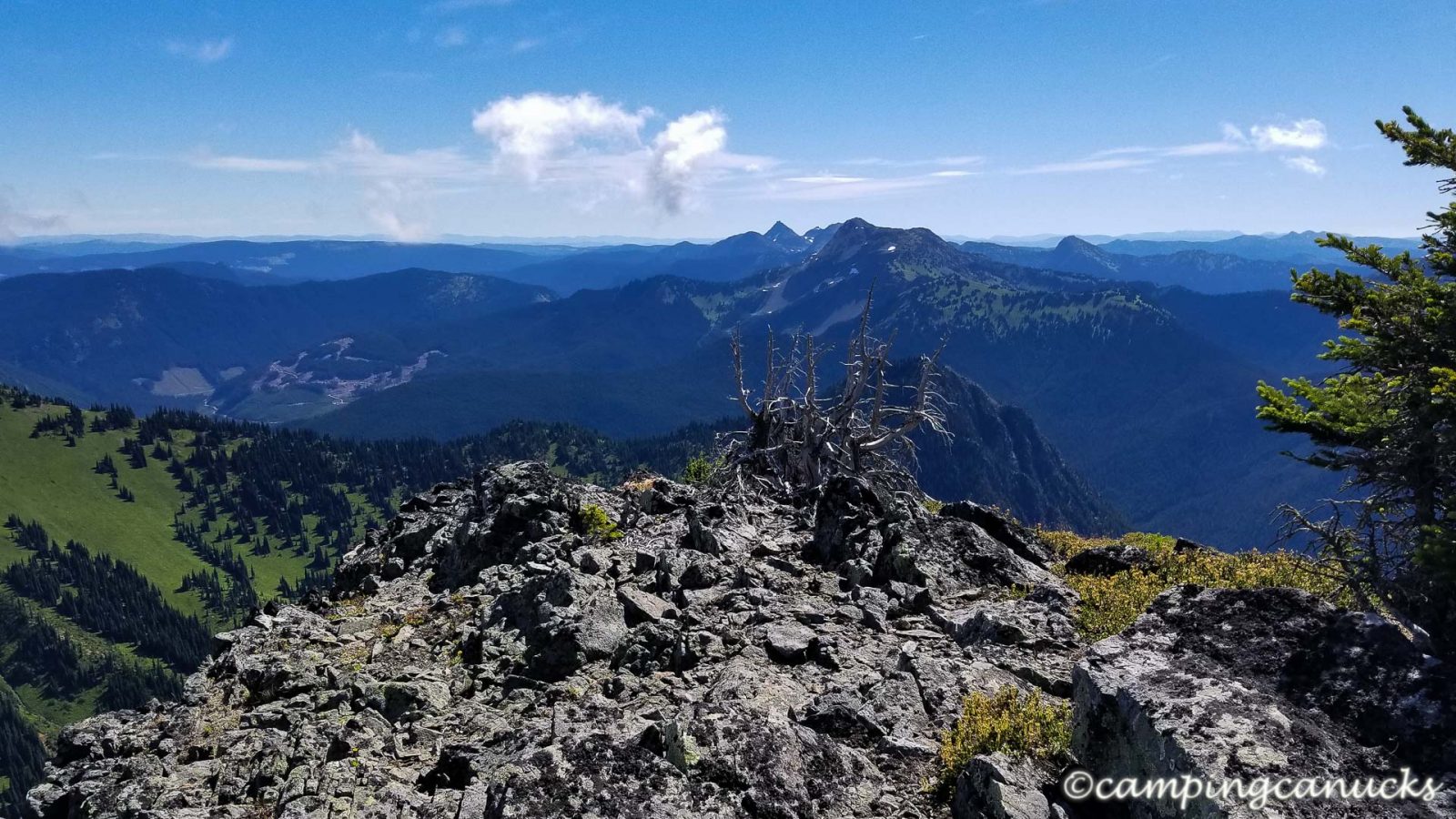 Mount Dewdney and some of its neighbours

We found ourselves back at camp by 11am. After a brief break, we loaded up our gear again and started the long hike back to down the valley below. There’s no doubt it’s a bit of a knee grinder on the way down and poles were certainly nice to have along. We met three groups on  their way up but aside from that, it was an uneventful and hot trip down and within a couple of hours, we found ourselves back in the parking lot where we happily unloaded our packs and hit the road for home.

Mount Outram is very much a worthwhile hike and one that we would highly recommend for anyone so inclined for a good steep hike to the summit. We were glad that we had done an overnight camp since it would have been a fairly long day to do in one haul. Overall, up and down was about nine hours for us. 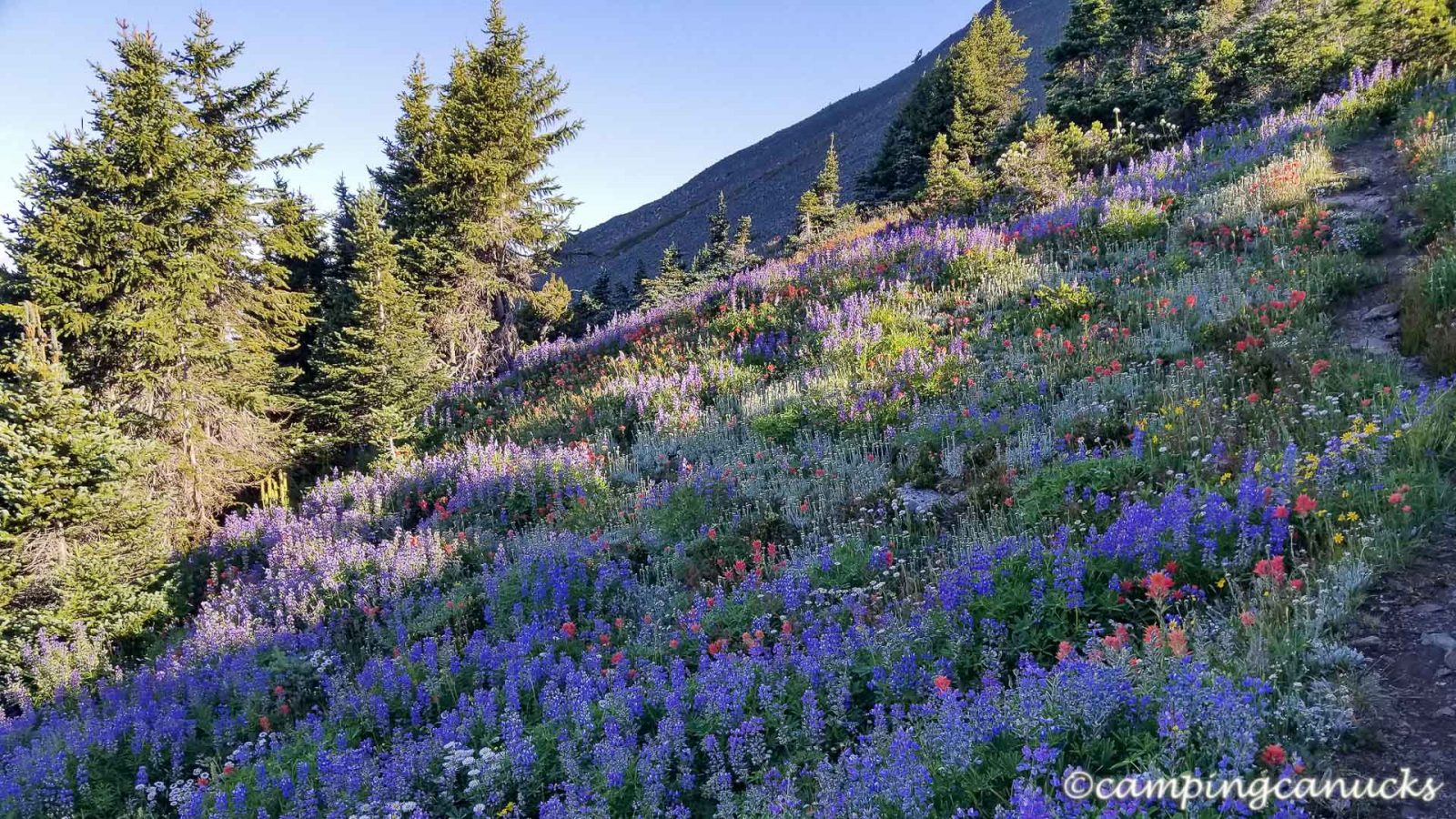 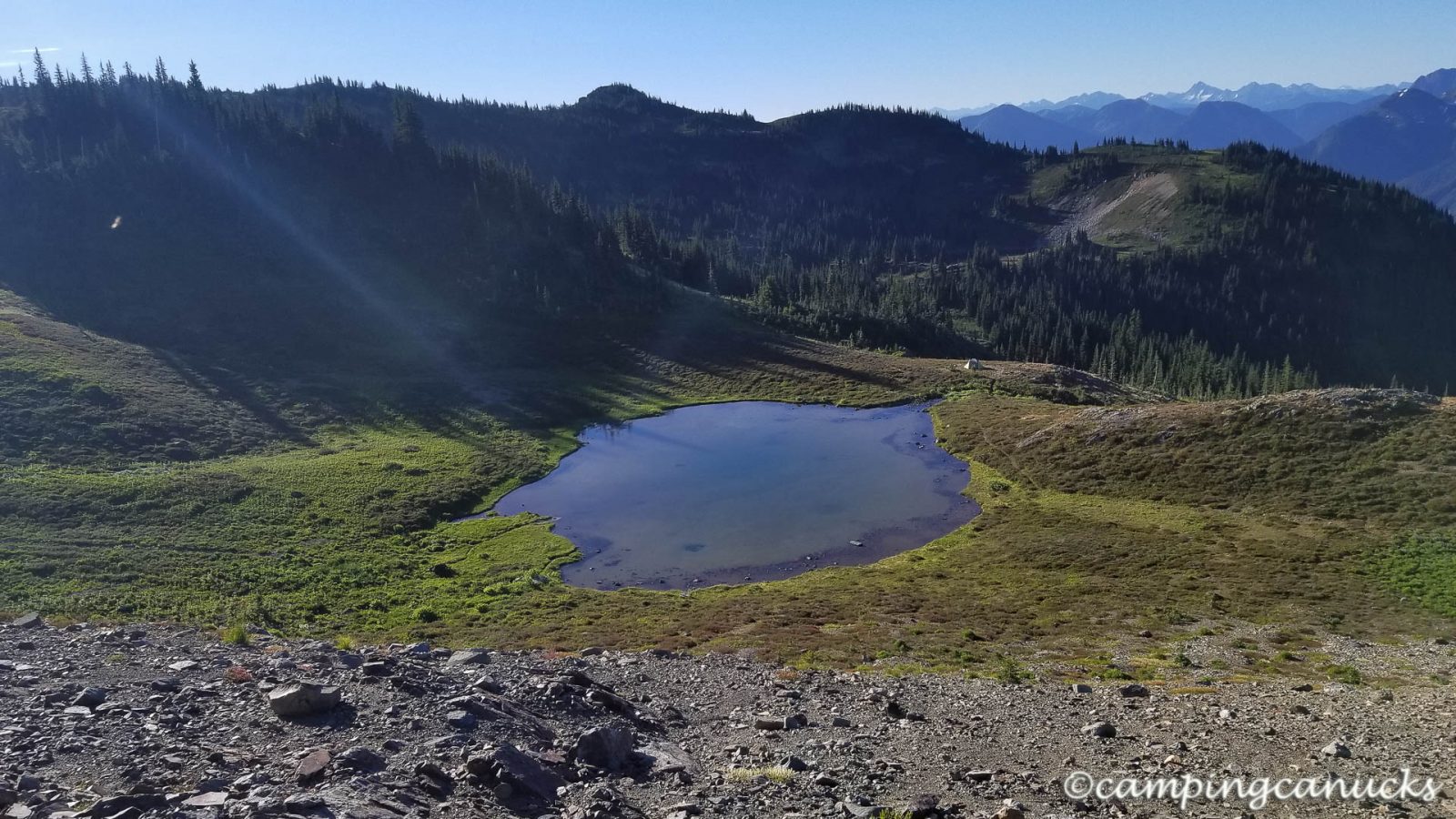 Little lake where we camped 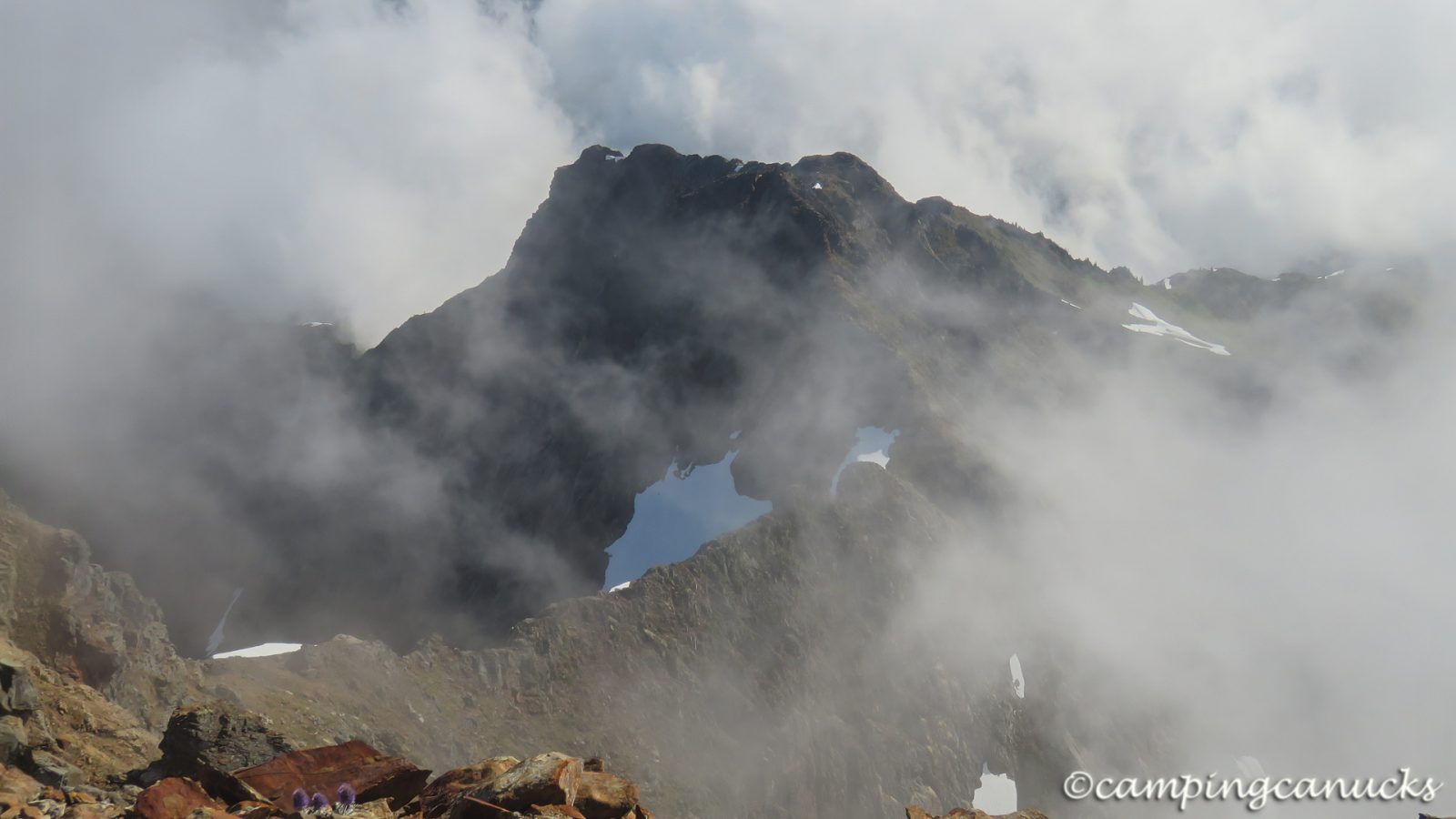 A peak near Outram popping up through the clouds 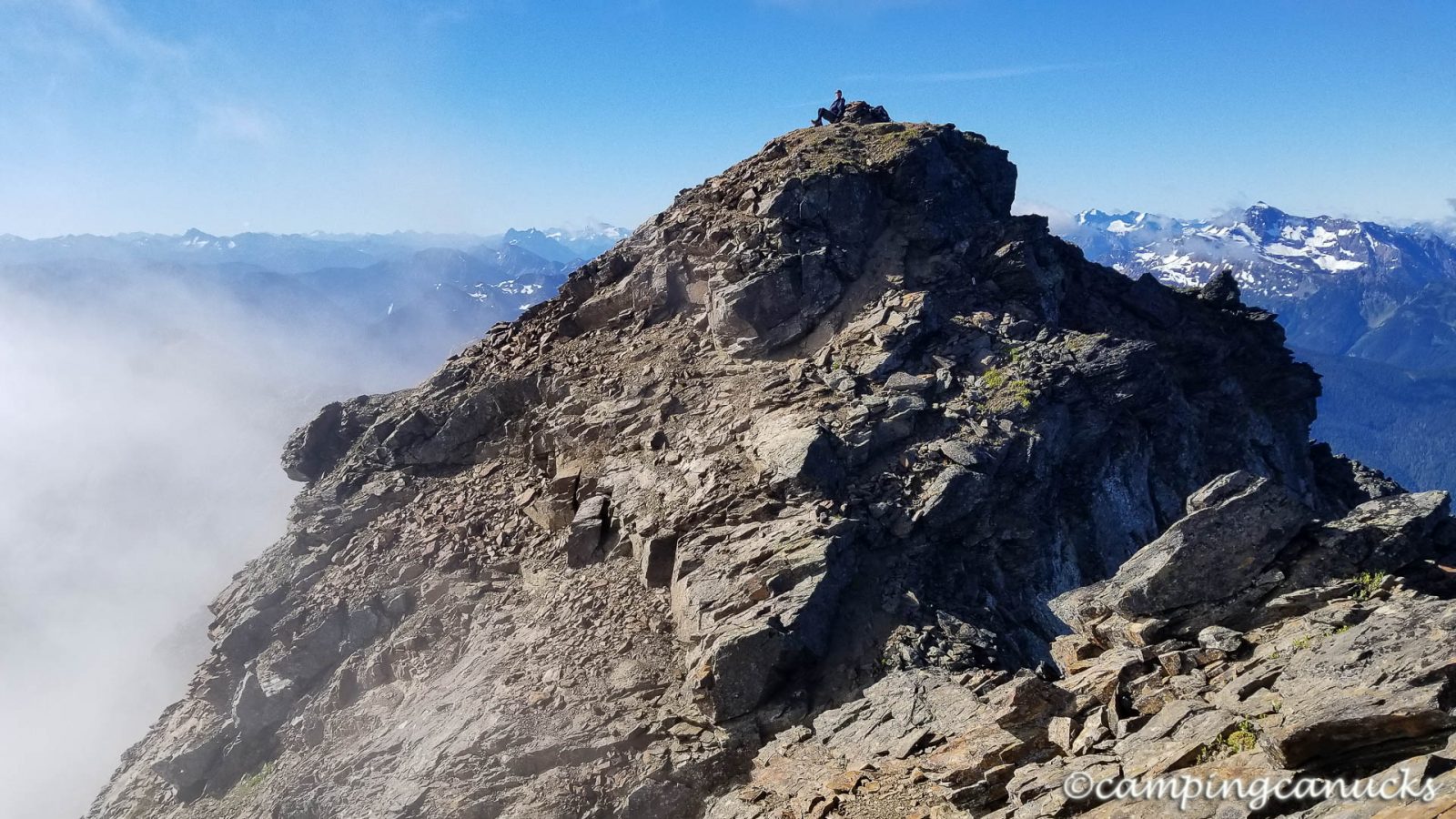 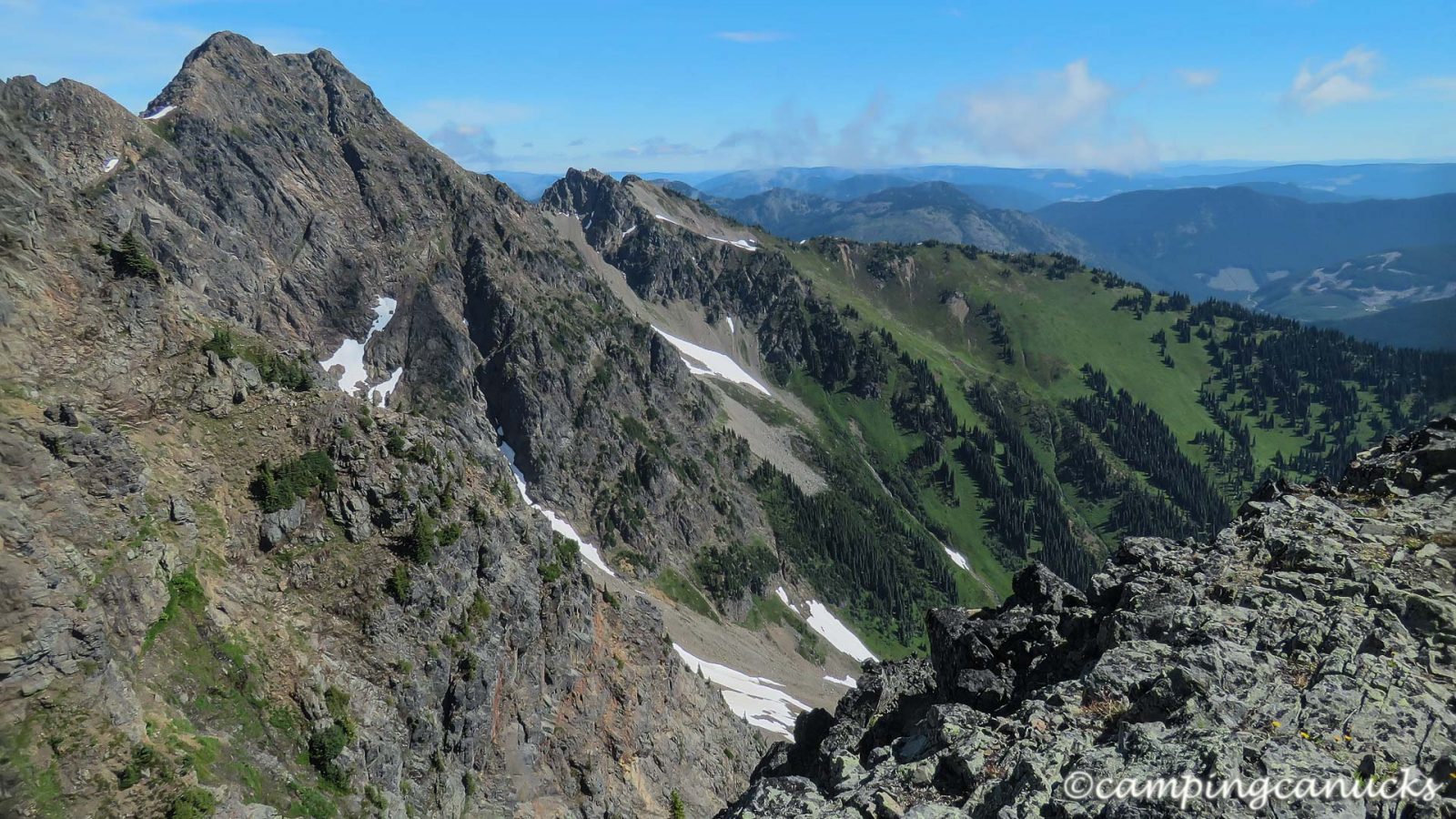 Some views to the east 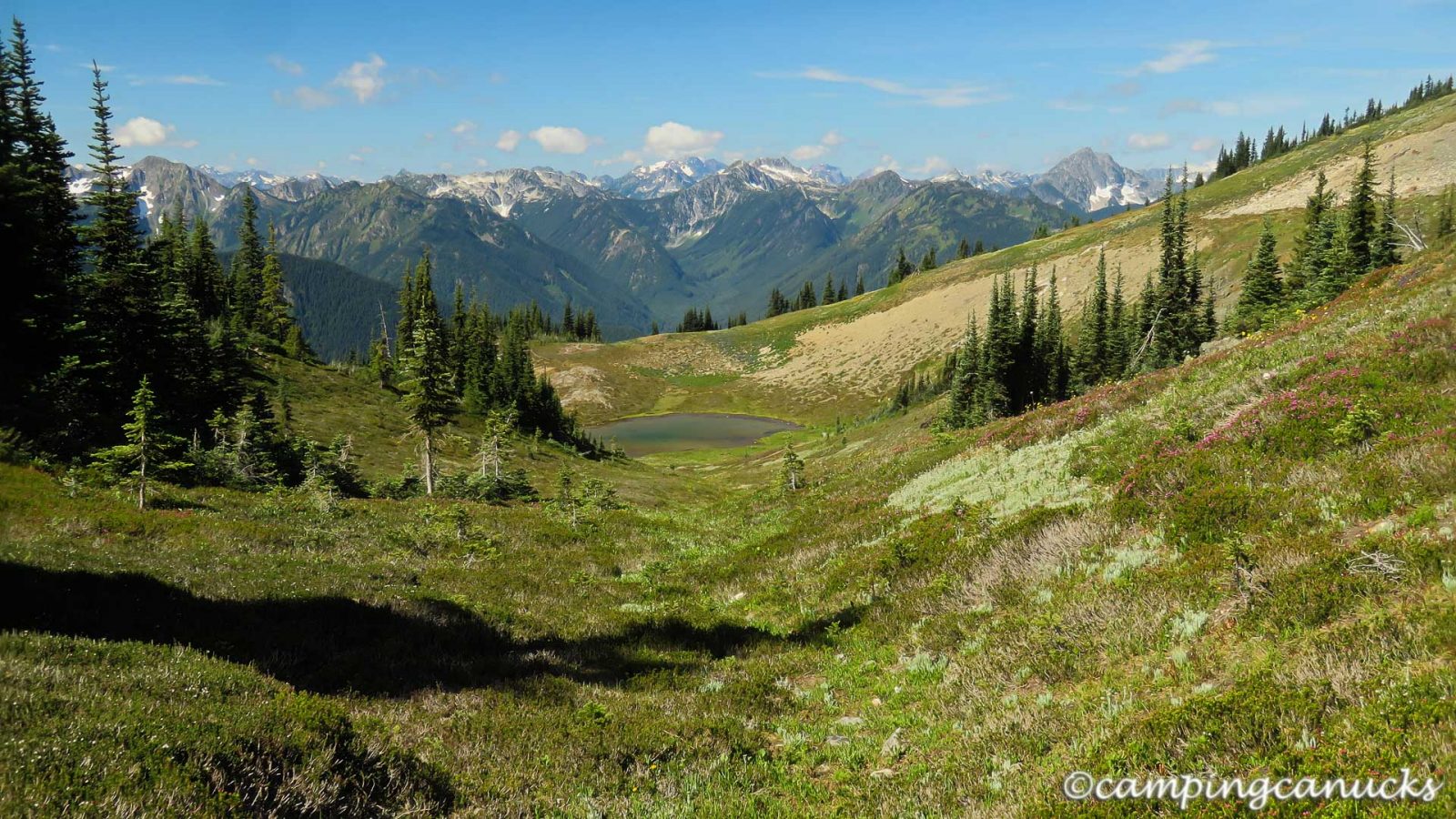