Dunn Peak in Dunn Peak Provincial Park has the distinction of being the highest mountain between the Stein and the Monashees and is a prominent feature that is easily viewed from Kamloops on a clear day. For years we had thought of getting to the top but had only made it to the upper part of its valley, on a previous trip several years back. So when Harry suggested a weekend trip in July to camp and climb in the park, I was excited to finally have a go at it and in short order, Harry, Dave, Lukas, and I decided that we would go in for a night to camp and tackle the peak early in the day before it got too warm.

One of the first challenges was just getting up to date info on conditions. There are a couple of other posts here and here that provided plenty of info even though they’re a number of years old now. Erring on the side of caution, we brought along a small trad rack, rope, harnesses, crampons, and ice axes. In the end, none of it was necessary although we did use the ice axes and crampons to make it easier to get to the western col before scrambling up the north west ridge.

Typical of July in central BC, there was heat and smoke so we started off knowing that we wouldn’t have the best views at the top (but that didn’t deter us).

The road in is the usual shape of older, deactivated forest service roads; rough and grown in. Be prepared for BC pinstripes and if you don’t have a high clearance 4×4, you likely will not make it to the trailhead. That said, there is a spot a couple of hundred meters short of the parking area that can be walked from to the trail.

The first couple of hours of the trail is a rather unremarkable walk on an overgrown and wet trail through the forest before you reach the sub-alpine meadows and begin to see the peaks that shelter the valley. That was also where the mosquitoes began to get intolerable. There were enough in the trees to necessitate bug spray but once we were in the meadows, each of us had a personal cloud of hundreds. It was amazing how many swarmed us and continued to swarm us for most of the time we were there. Even the summit didn’t offer a respite from them. I can’t say I wear my head net very often when but this was one of those times in which I was very grateful to have it along. 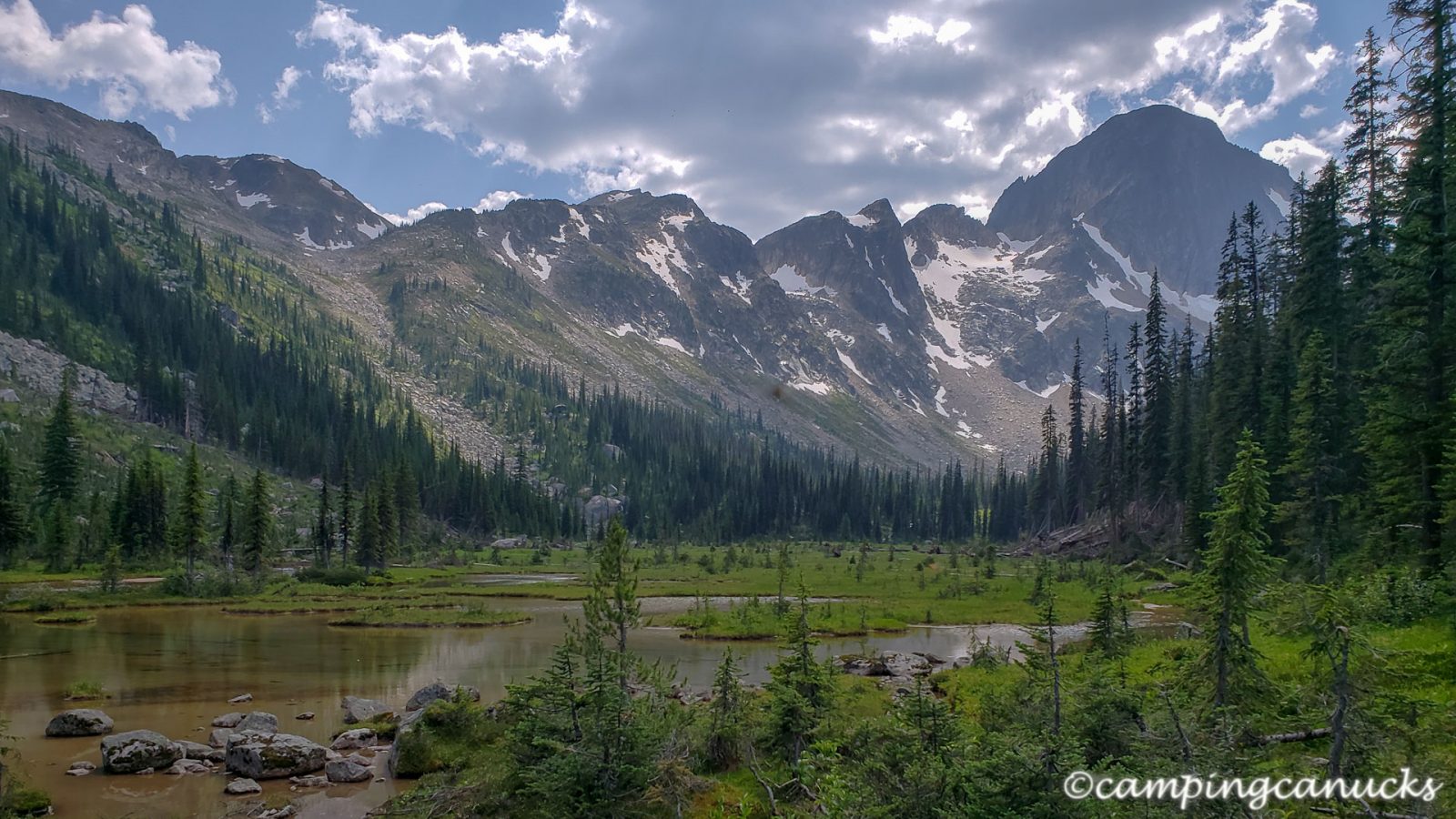 Dunn Peak looms above the valley

Continuing on up the valley, after about three hours of hiking near the north side of the peak, we eventually reached a spot that was all bare dirt and looked like it had been washed out at some point. It was also an ideal place to camp with water right beside us. Being still somewhat early in the afternoon, we set up camp and walked to the top of the valley rather than just sit around swatting at bugs. 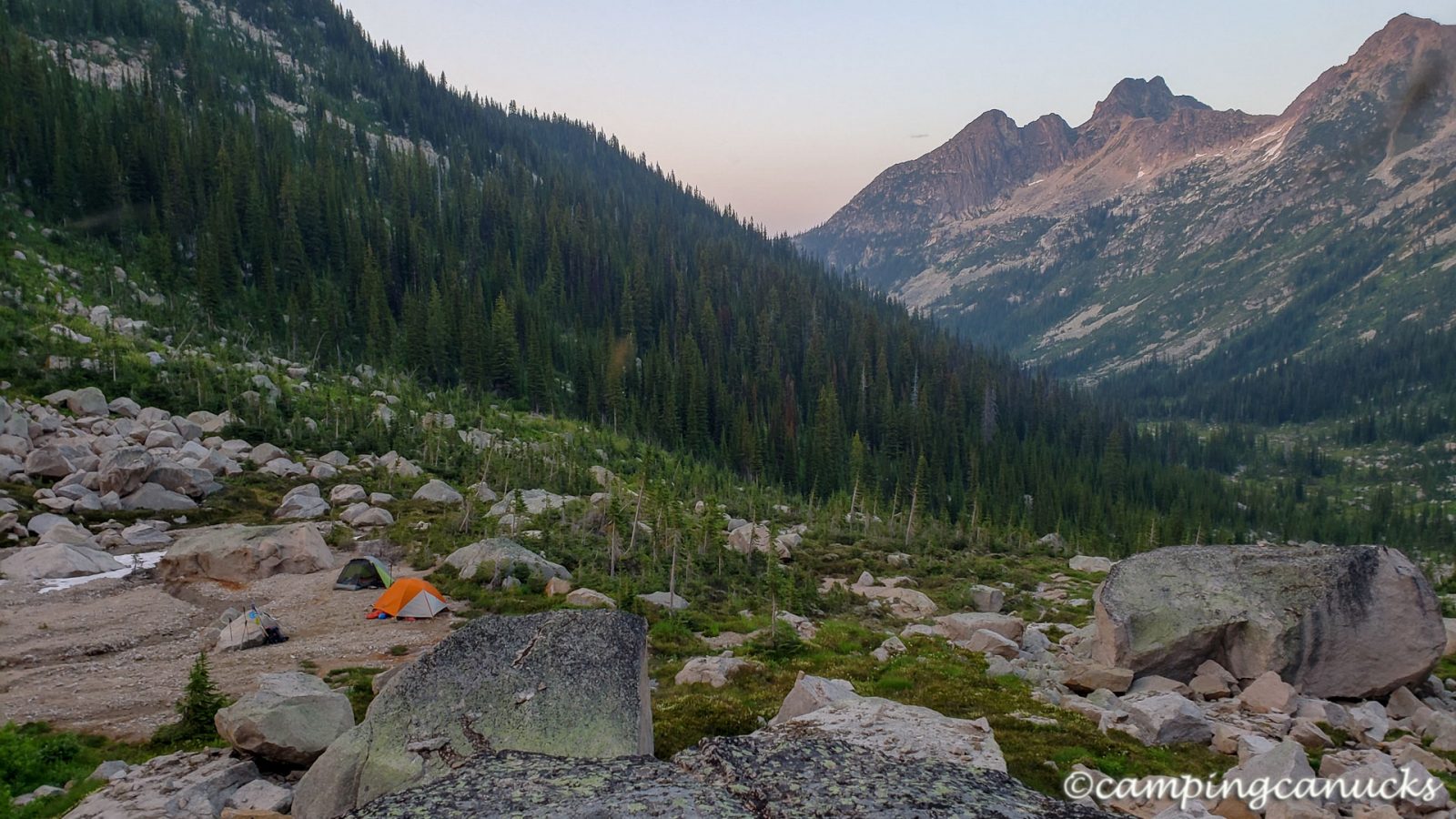 Most of the upper valley is a large rock garden where the many pieces of the slopes and mountains have accumulated over the years but it did give us an opportunity to check out our approach for the following day. After returning to camp and having dinner, we moved to a large rock perched over the camp to play cards until the bugs finally drove us to our tents early.

Being that it was expected to be a hot day, we arose at 4am to eat and get ready to go to the top. The day dawned a bit smokier than the previous day but it was still far clearer than in had been in Kamloops. Surprisingly, there was no relief from the mosquitoes;  even at 4am, we had clouds of them flying around us. After a quick breakfast and a last minute gear check, we started on our way a little after five. 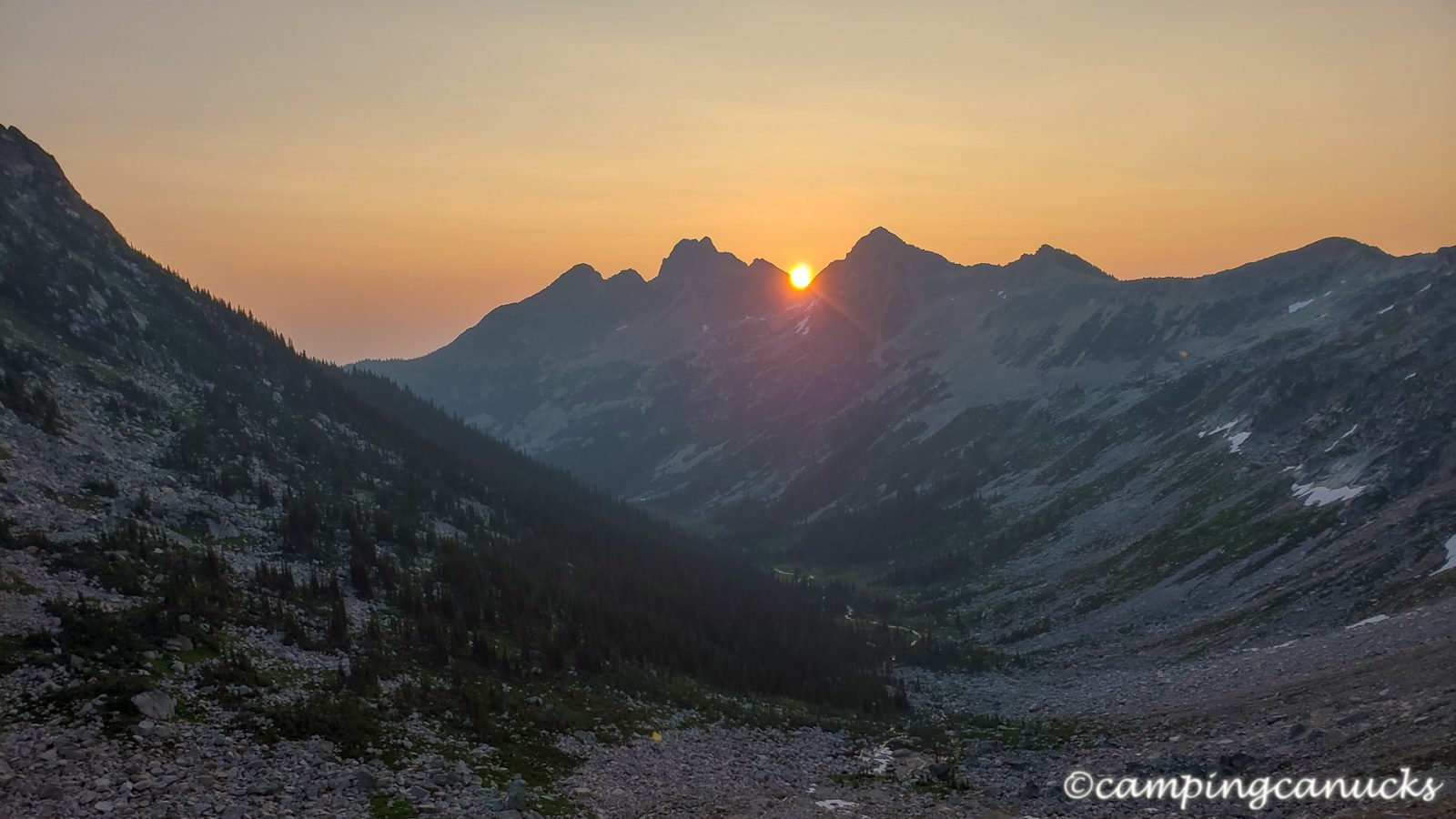 Since we had the gear, we elected to follow the snow pack as it was easier going than walking on the loose rocks and dirt and found ourselves on the col about an hour after leaving camp. Being on the snow did offer some relief from the bugs. 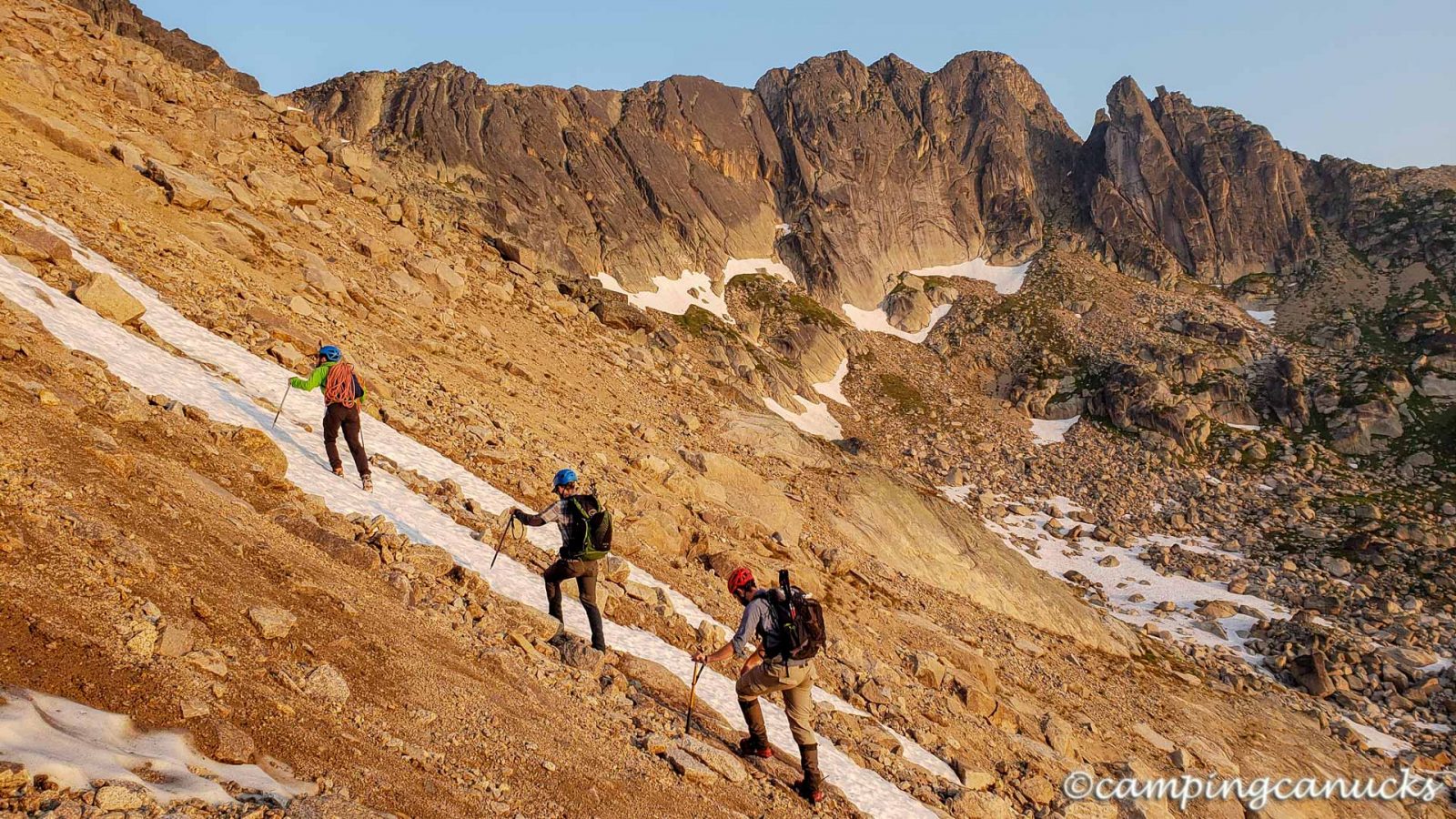 Ascending from the valley bottom

We were now on the northwest ridge of Dunn. At this point, we dropped any gear that we didn’t think we needed and proceeded to scramble on the way up. As others have noted, it was a bit loose here and there and there were plenty of rocks that were just waiting to let go. Caution was definitely required to not take a slip at this stage. 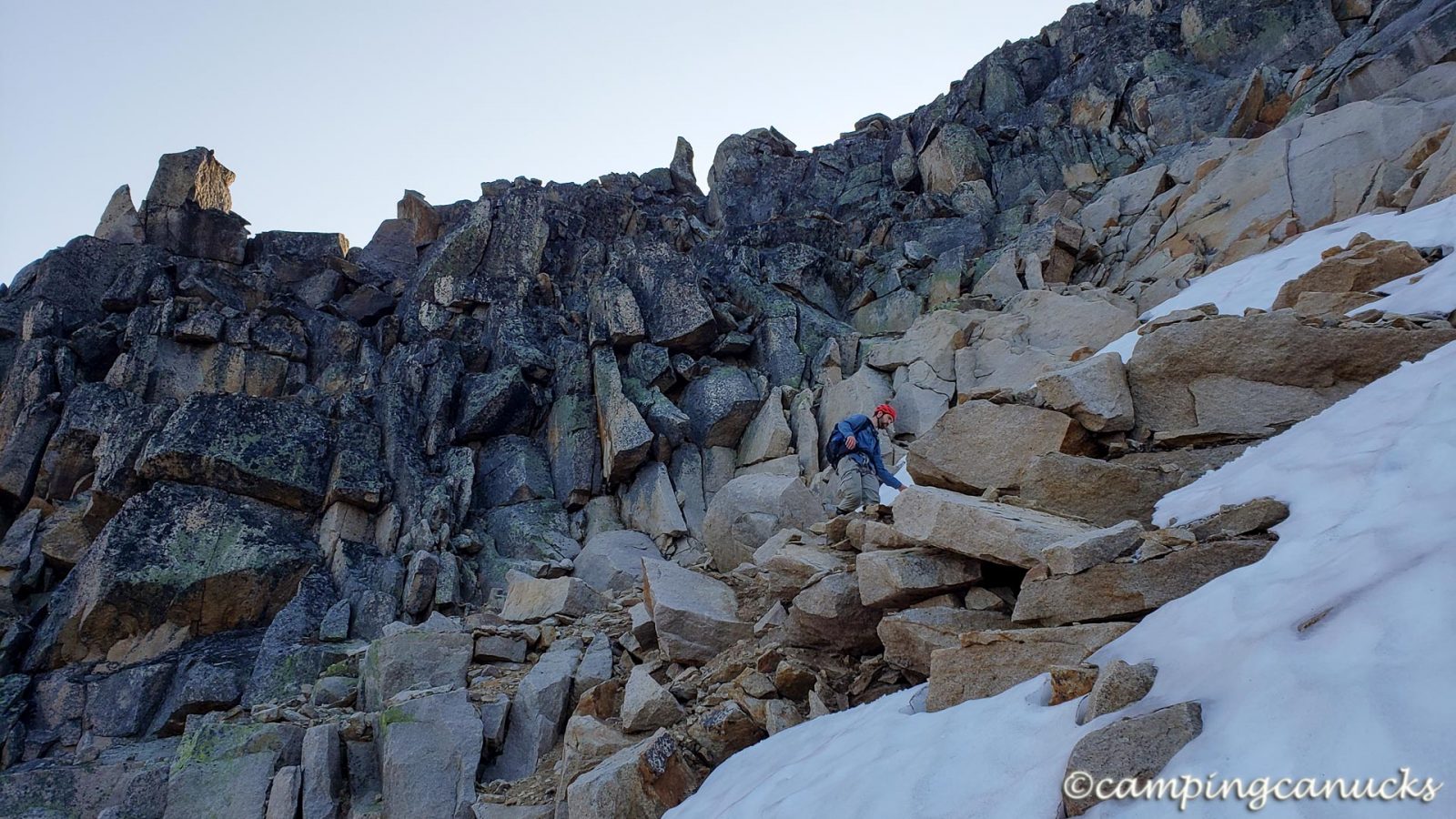 As we got higher, we encountered some snow but it was easily gotten around. The quality of the climbing also got better as we worked our way into larger and more solid rocks. That said, there were still moments when the rocks we stepped on teetered a little bit as we proceeded up.

There is a smaller, second peak just west of Dunn’s summit that requires a brief descent before going up the final part to the top. We made it a bit harder than it needed to be by not following the easiest way up. Later, on our way back down, we could see a better route to the north of where we had ascended that had obviously been used in the past. 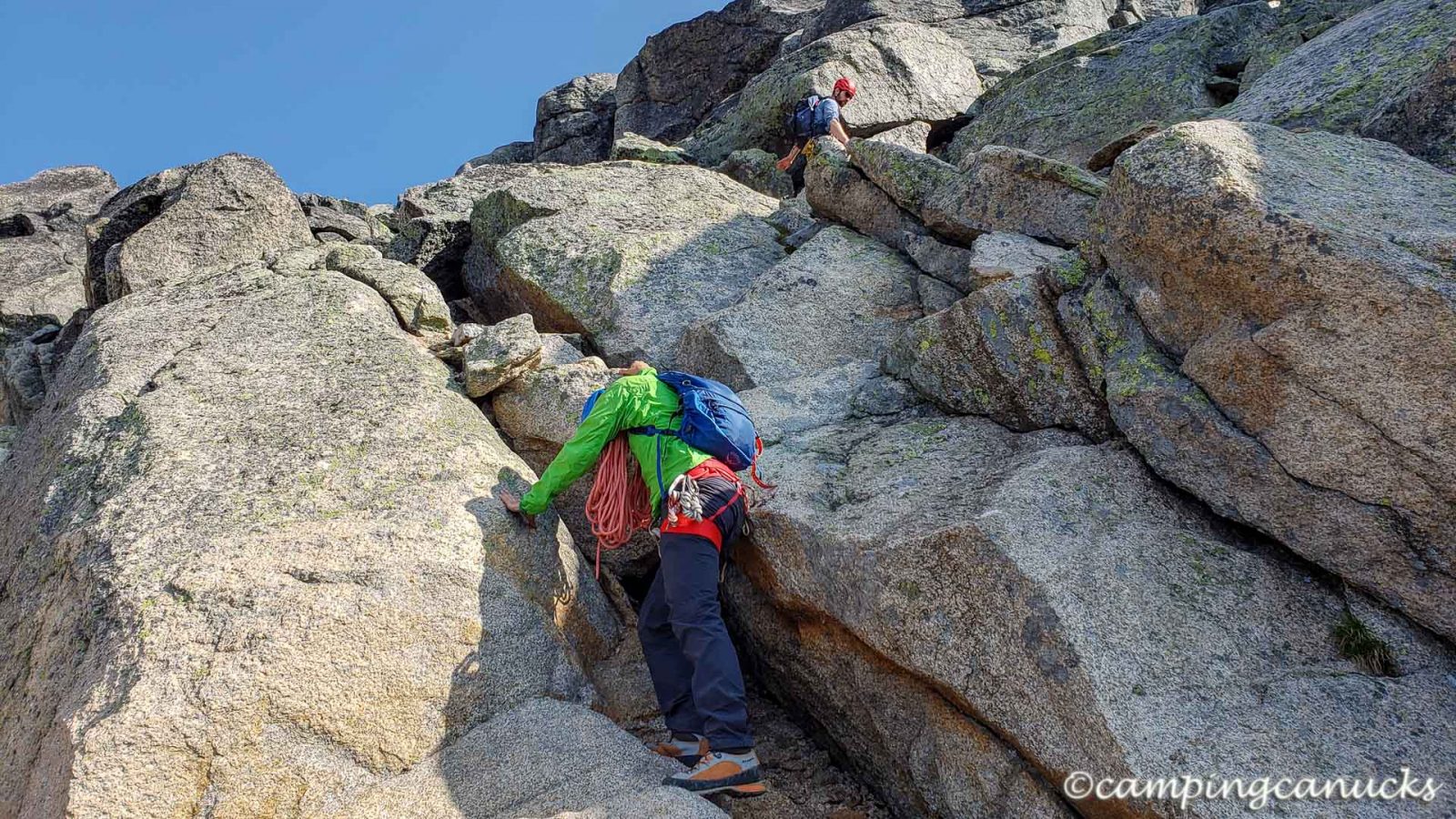 Scrambling up the blocks

We arrived at the top at about 9am after climbing for about 3.5 hours from our camp and we were greeted with mostly great views in all directions. Of course, the large amounts of smoke in the air reduced our visibility a lot, but we could see much of the immediate area around us. Another nice surprise was that there were no towers or any garbage at the top. It had been noted that there used to be a comm tower of some sort but we arrived to find nothing remained except for the sheared-off bolts in the rocks from the guy lines. I guess someone had flown in at some point and removed everything by helicopter. 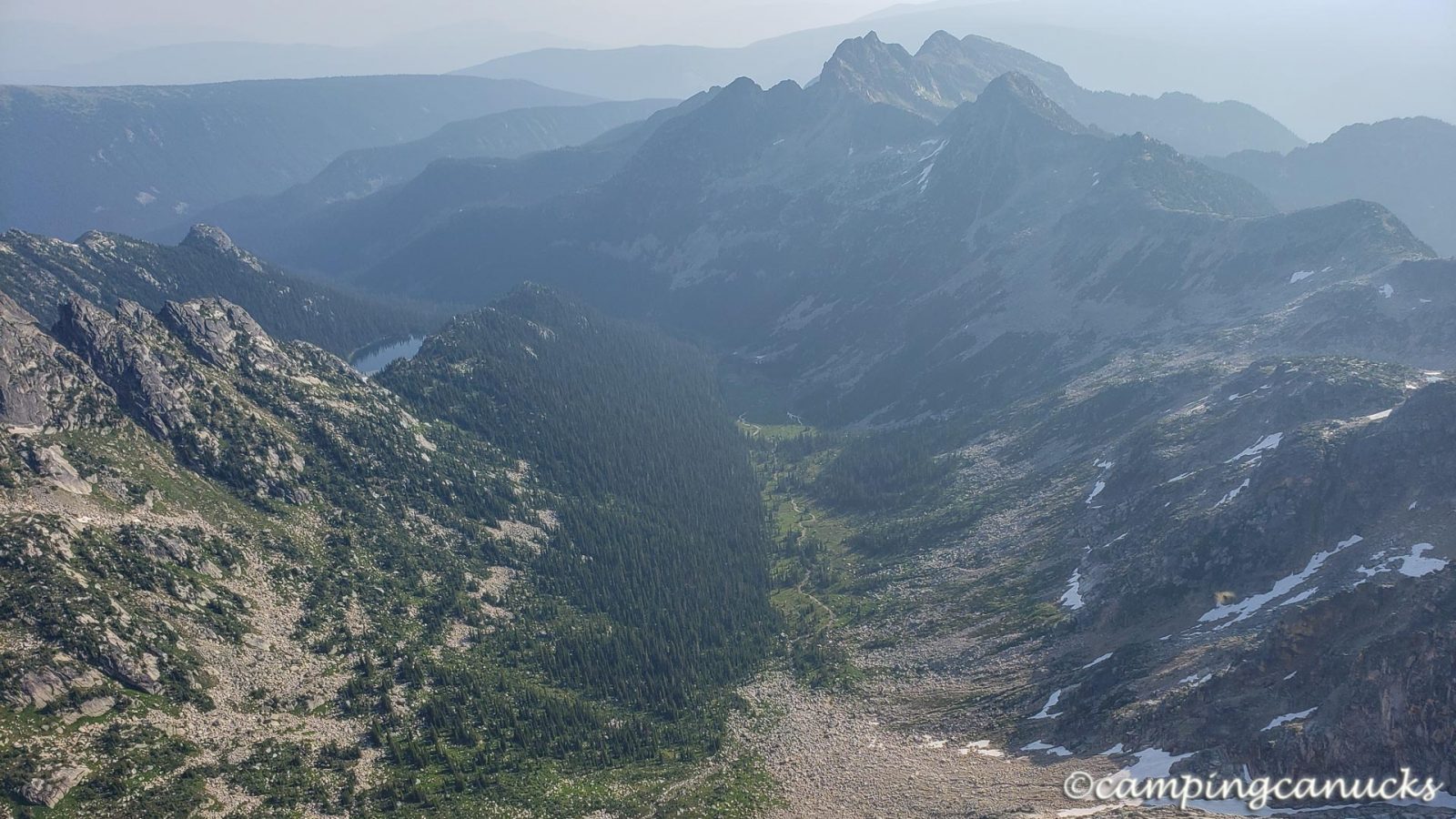 Dunn Valley as seen from the summit

The summit itself is a large, mostly flat top that offered views in all directions so we enjoyed a bit of time at the top before the mosquitoes once again drove us to keep moving. 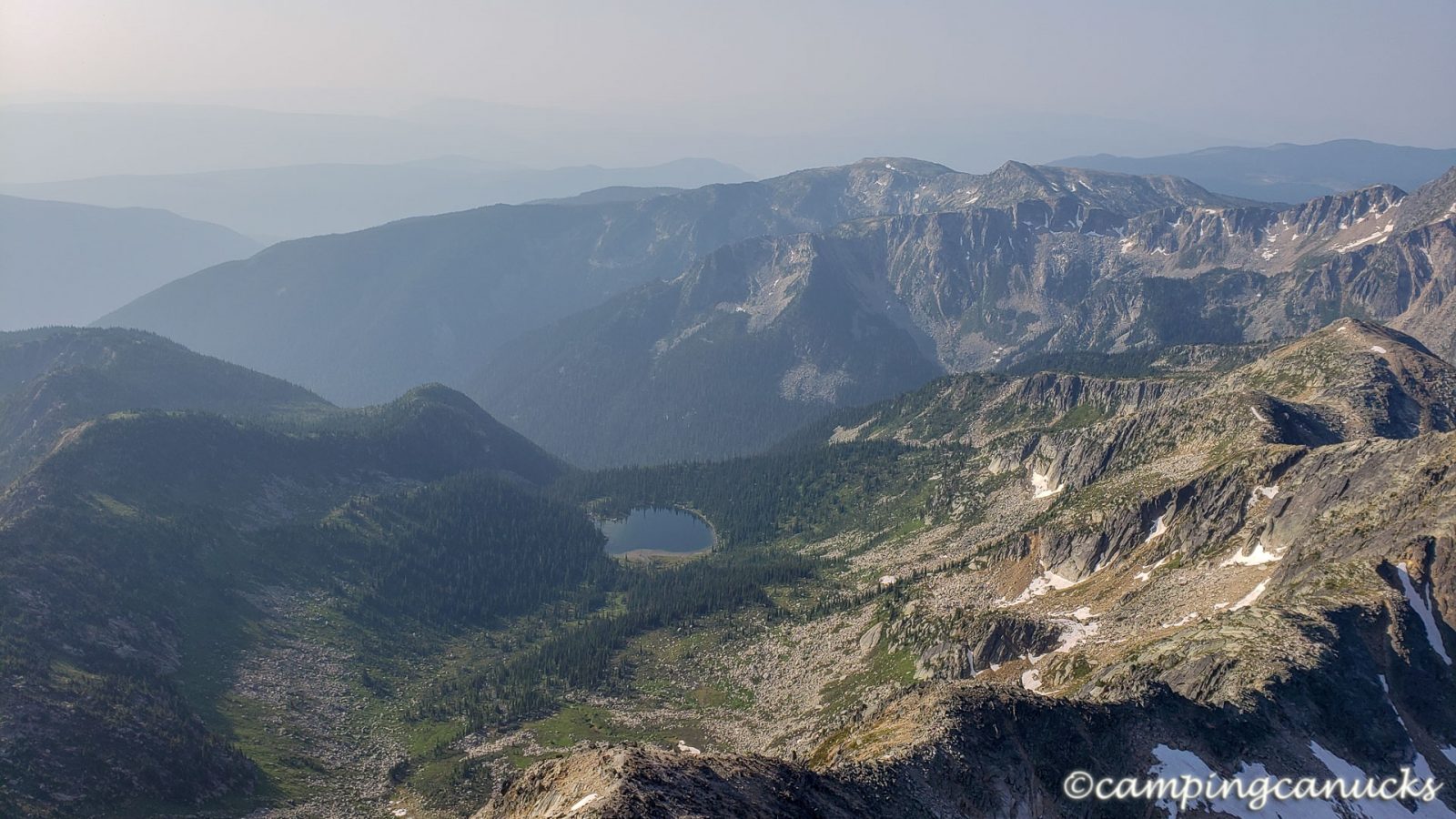 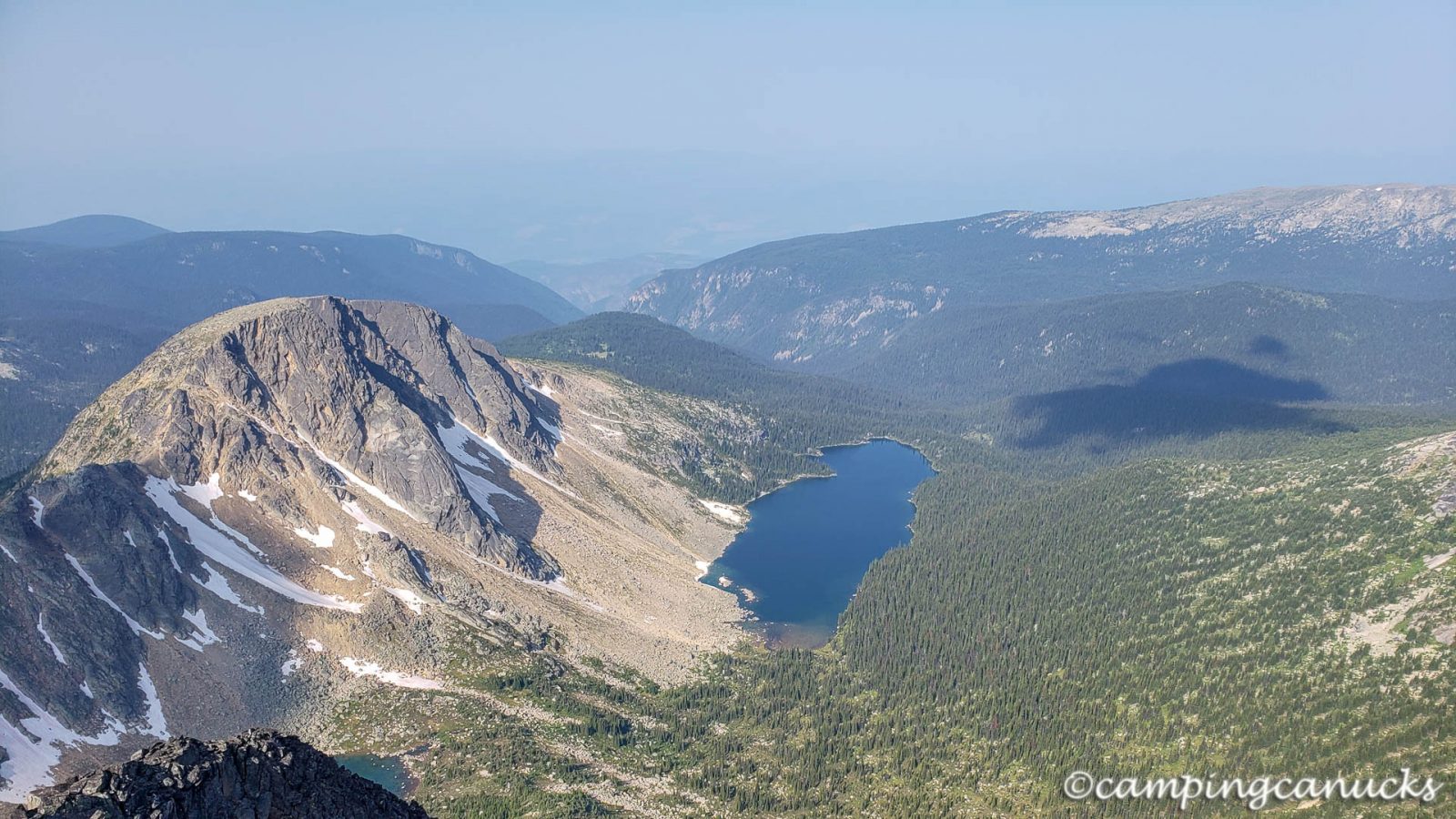 A lake to the east of Dunn Peak

Descending was pretty straightforward and we largely followed our previous route. 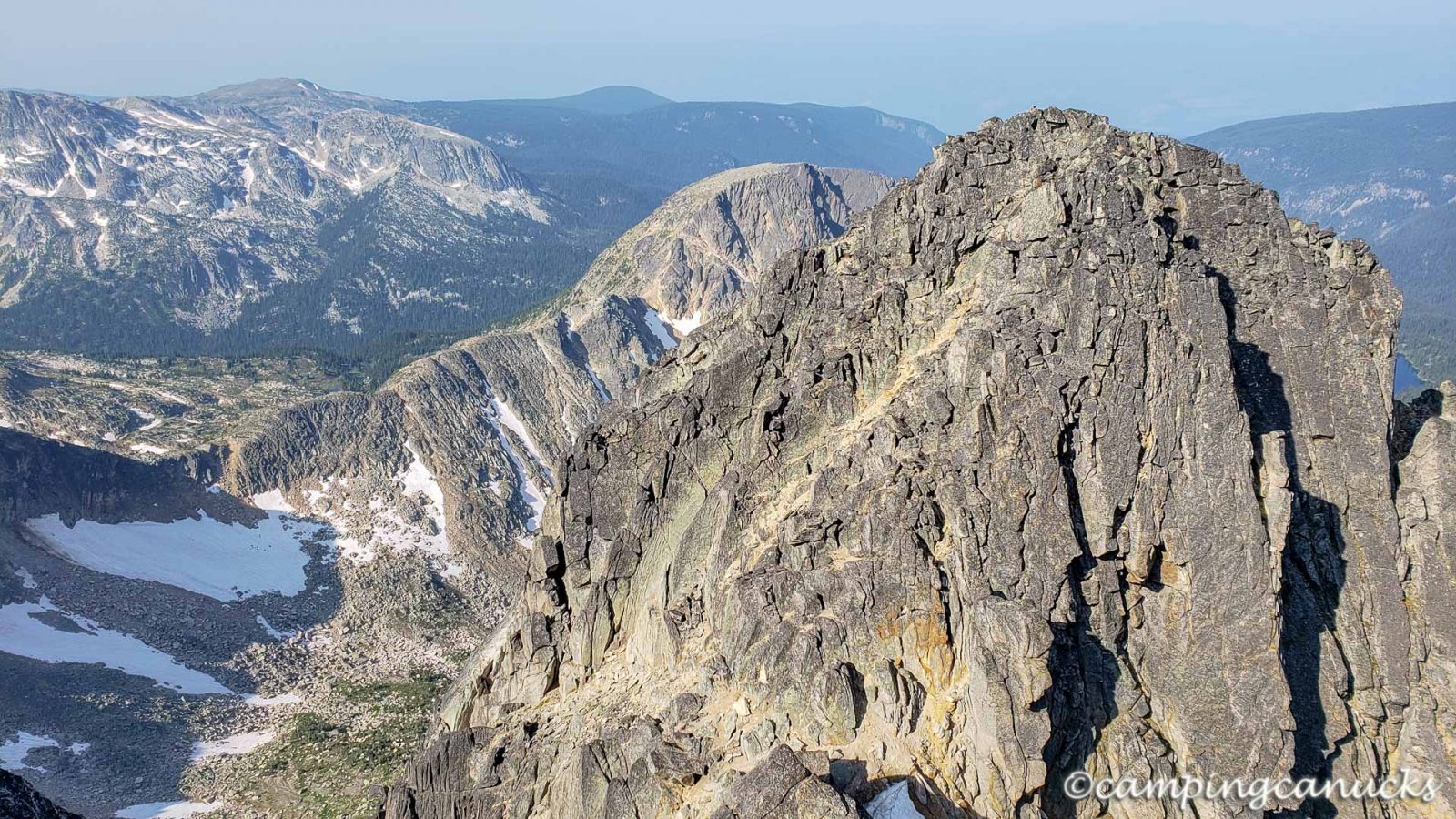 We made good time on the way down until we reached the gear we had left behind. After a quick break, we headed back towards the snow pack to descend back into the valley. 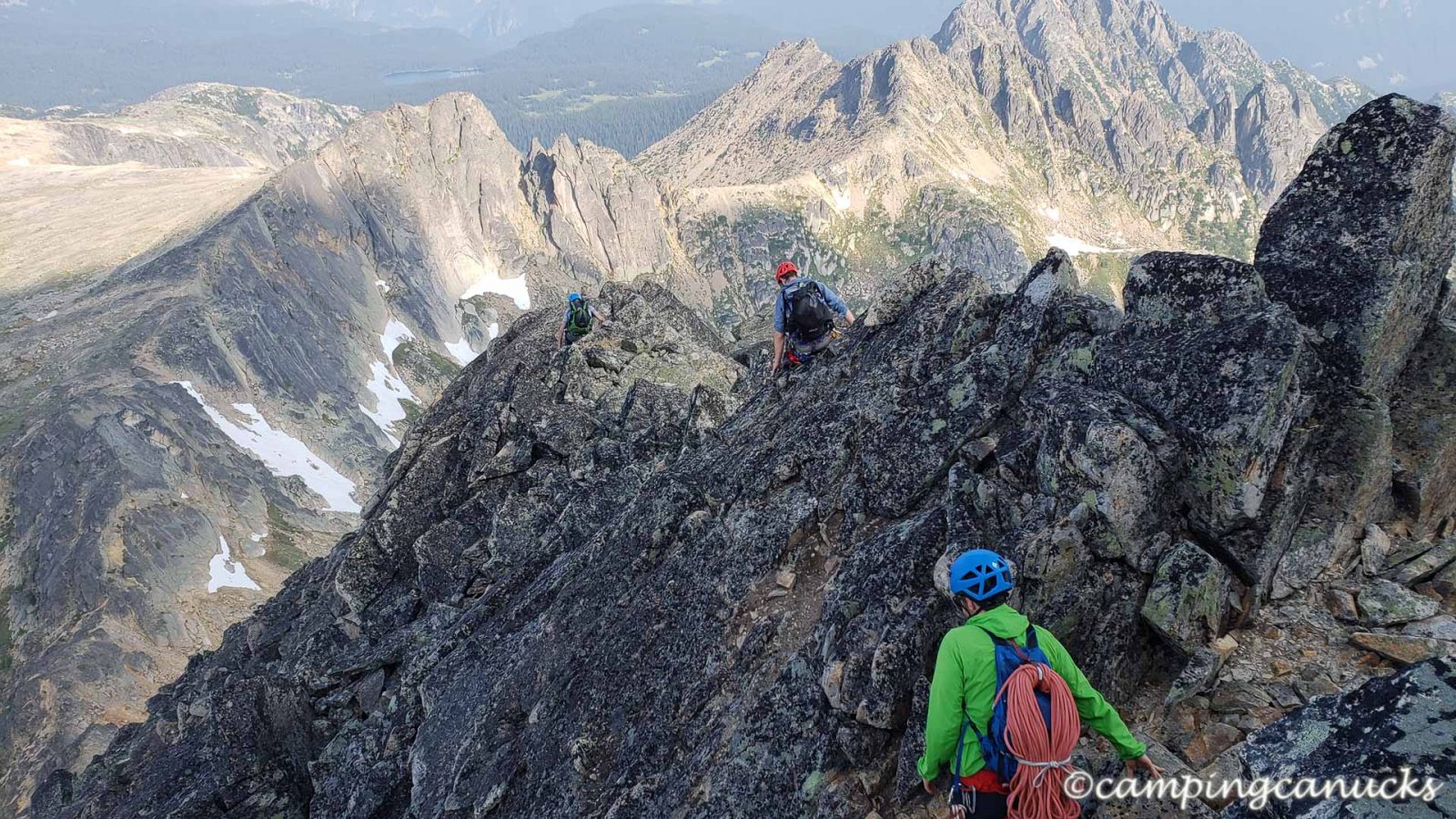 As we reached the snow pack and as I was about to sit down and put on my crampons, I heard Lukas yell ‘Rock!’. I looked up to see a rock half the size of a refrigerator falling down the slope to where I was. With a quick move, I darted behind a bigger rock with Dave and watched in fascination as the rolling rock landed right where I was about to sit. It was amazing watching this boulder rocket its way down the snow until it caught air, slammed into a bigger rock, and broke into about five pieces, all of which continued to roll to the valley bottom. I had narrowly avoided being taken out and had to laugh at the craziness of it. It was a good reminder that any and every rock, no matter the size, can be ready to move at a moments notice.

I would like to say that the rest of the way down went without incident but that was not to be. While glissading near the bottom, I slipped and started to slide. It only took me a few moments to move into self arrest with my ice axe but I lost my grip once the axe bit into the snow and down I went, sliding my way towards a rocky patch below. Luckily I was able slow myself down with my crampons and found that I just slid onto the rocks and stopped with no injuries aside from some snow burn on my arms. It was another good lesson to remember as I usually wear gloves when using an axe but hadn’t bothered this time.

From there, we finished coming down and arrived back at camp around noon. Total time up and down was about six and a half hours. It was time for coffee and lunch before we packed everything up and started our hike back down the trail, once again being swarmed by legions of bugs. It wasn’t until we were back in the trees that we got some relief and took a break.

And as a final mishap, if you will, I stepped on or near a wasp’s nest in a meadow and got stung a bunch of times. I’m sure my screams and curses were heard a long ways away.

In the end, we rolled back to the vehicle around four in the afternoon to start the drive back to Kamloops.

Dunn Peak was certainly worth the trip. While not very technically difficult going up the NW ridge, I can only recommend it to those who have experience with exposed scrambling. While we did bring along some gear, we found that it was not needed but others might find it useful, depending on their comfort level. And I would highly recommend not doing this trip until later in the season when the mosquitoes are largely gone. They were by far the hardest part of this trip to endure.