Spending the night at the Álftavatn camp was a first real opportunity to meet some of our fellow travelers on this route. People from around the world, with many being from Europe and the USA, had come here to live this great Icelandic outdoor experience. Some were experienced backpackers, hikers, and so on. And some, were not. One of the most notable groups was six young guys from New York City who had packed along one of the biggest salamis we have ever seen as dinner for their first night. They were a happy bunch and it was obvious that even with the aches and sore feet and adverse elements, they were having a great time on what was likely their first backpack trip. Days later we met them at the airport on their way home so we know they all made it safely back.

The camp at Álftavatn is flat. There is no cover and the wind was a constant fact of life. It made for a bit of challenge setting up the tent, particularly since the ground was largely sand and did not hold stakes very well. In the end with the help of lots of guy lines, we had secured our tent the best we could. A good thing, too, since the wind started to blow incredibly hard during the night. 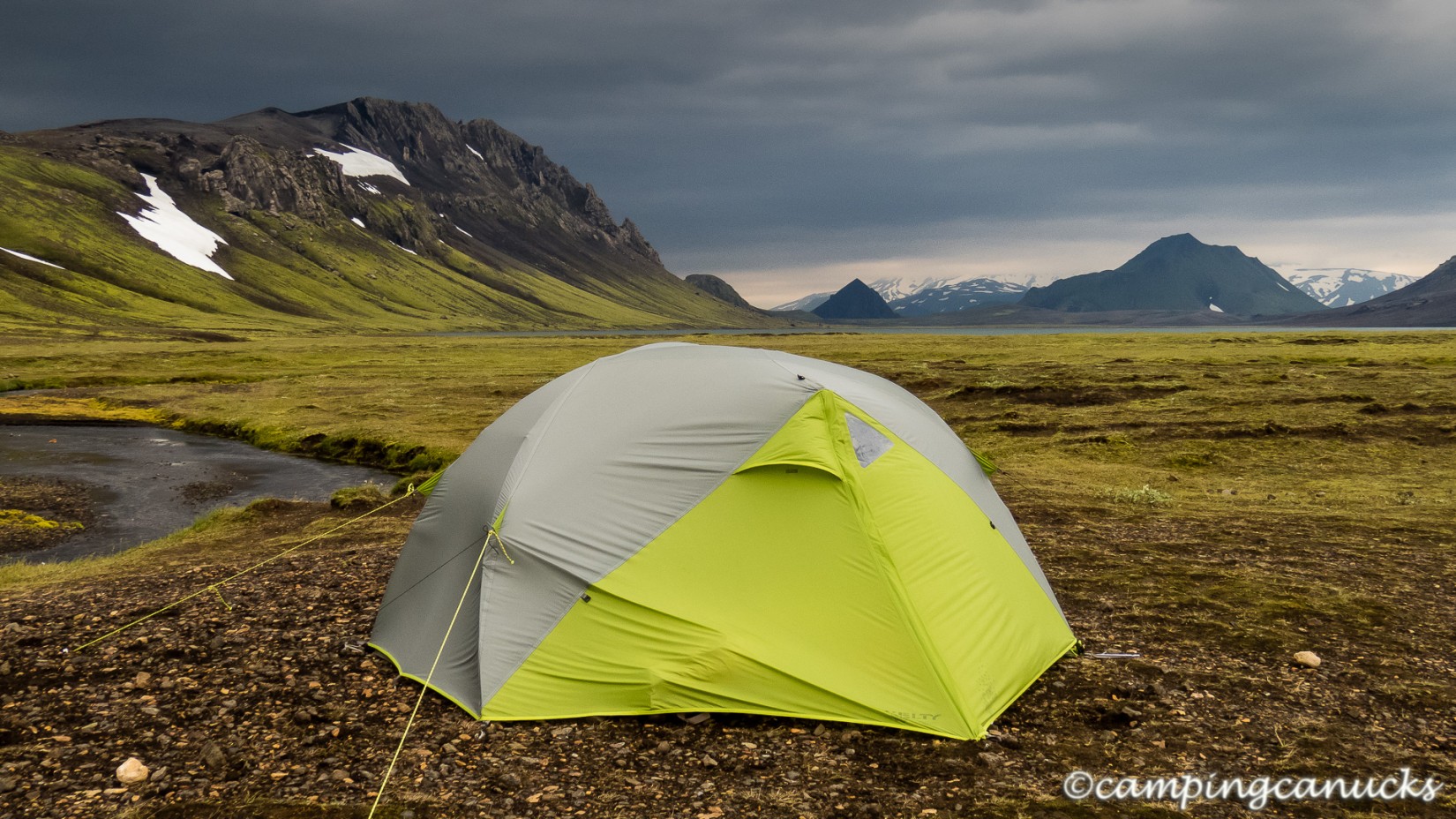 Well after midnight, we were awoken by the sound of the wind, voices, and a number of headlamps bobbing around in the dark all over the camp. The wind was blowing something fierce and people were running around trying to get keep their tents up or setting them back up after they had been blown over. We also began to get seriously concerned that our tent was going to collapse as at times, the poles were being bent so far over that we almost expected them to break. Fortunately after lying there restless for an hour or so, we realized that our tent wasn’t going anywhere and we were able to get back to sleep. Not everyone was as lucky as there were people the next day with broken poles, ripped flies, and just generally messed up tents that didn’t fare as well.

Day two on the trail was a shorter leg to the next camp through what was to be a fairly dreary day, albeit we were not completely whited out. Our first river crossing was shortly after leaving camp, before we arrived at the next hut/camp along the route, Hvanngil. It had been advised for us to make for this camp the previous day but with us rolling into the last camp late in the evening, we did not want to go on. Word has it that Hvanngil is a lot less windy, relatively speaking. 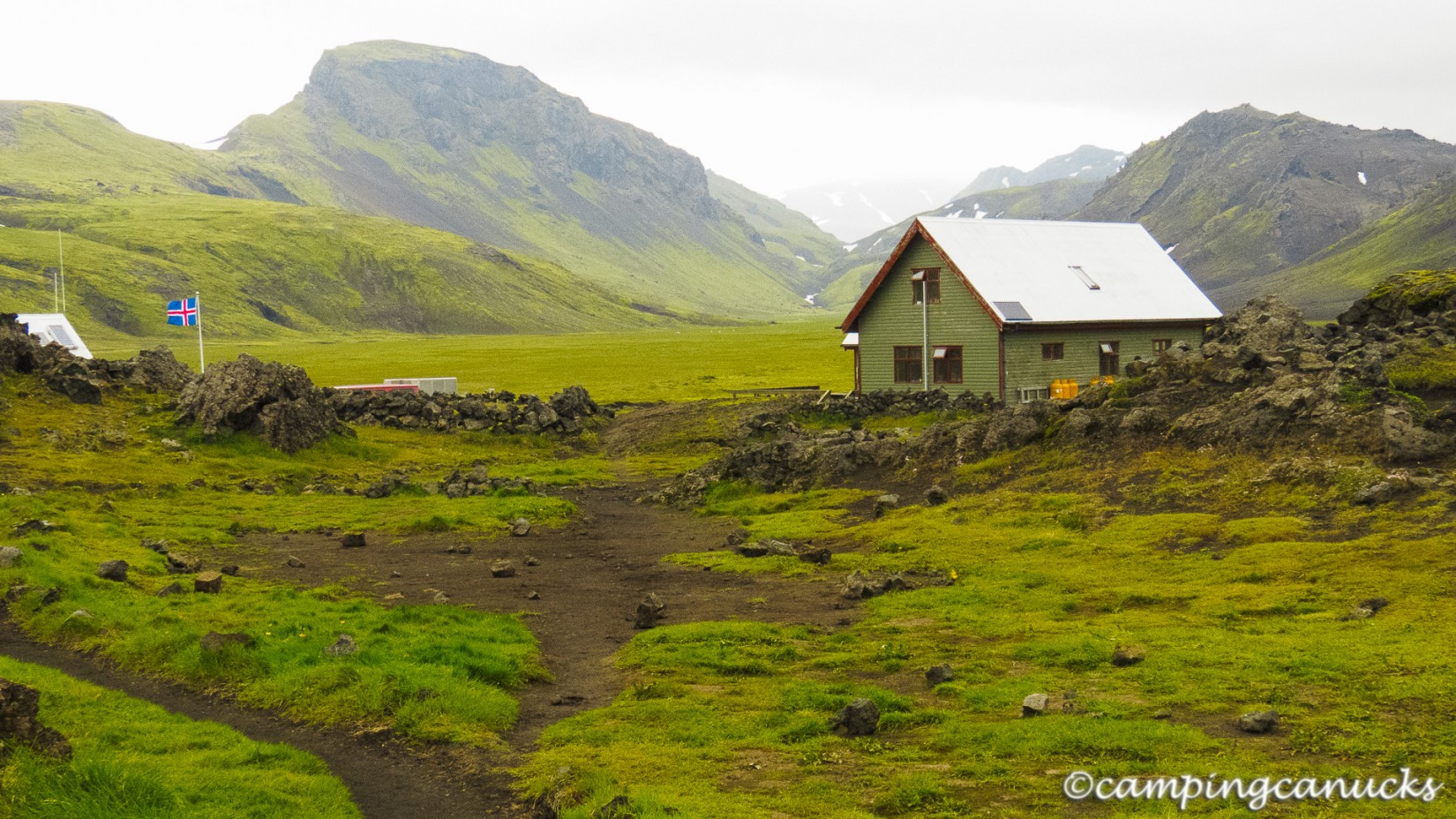 The trail leaving the camp weaved through old volcanic flows before we reached the flats south of the camp and started encountering more rivers. 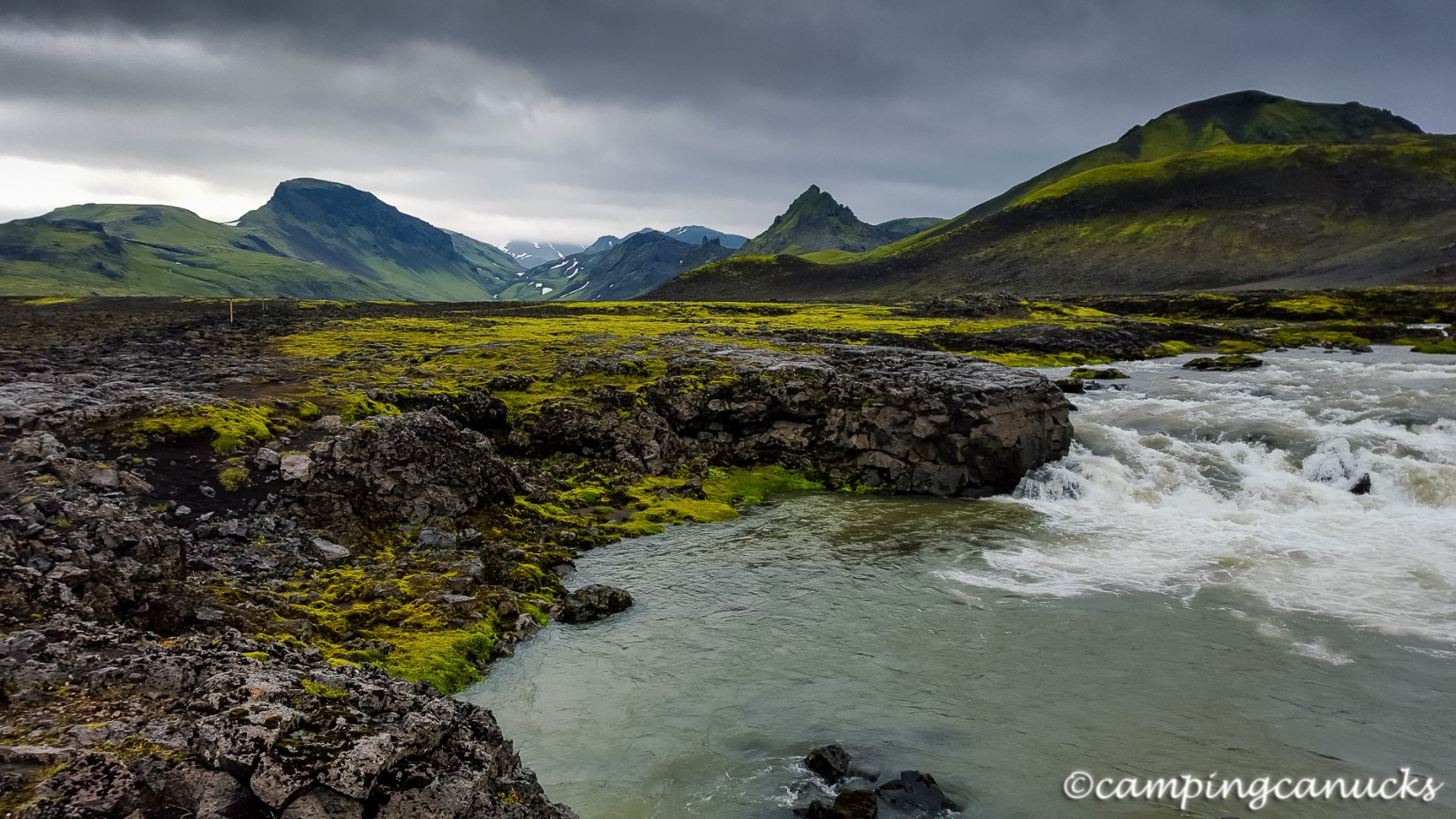 As we continued along the trail, we had another big river crossing. 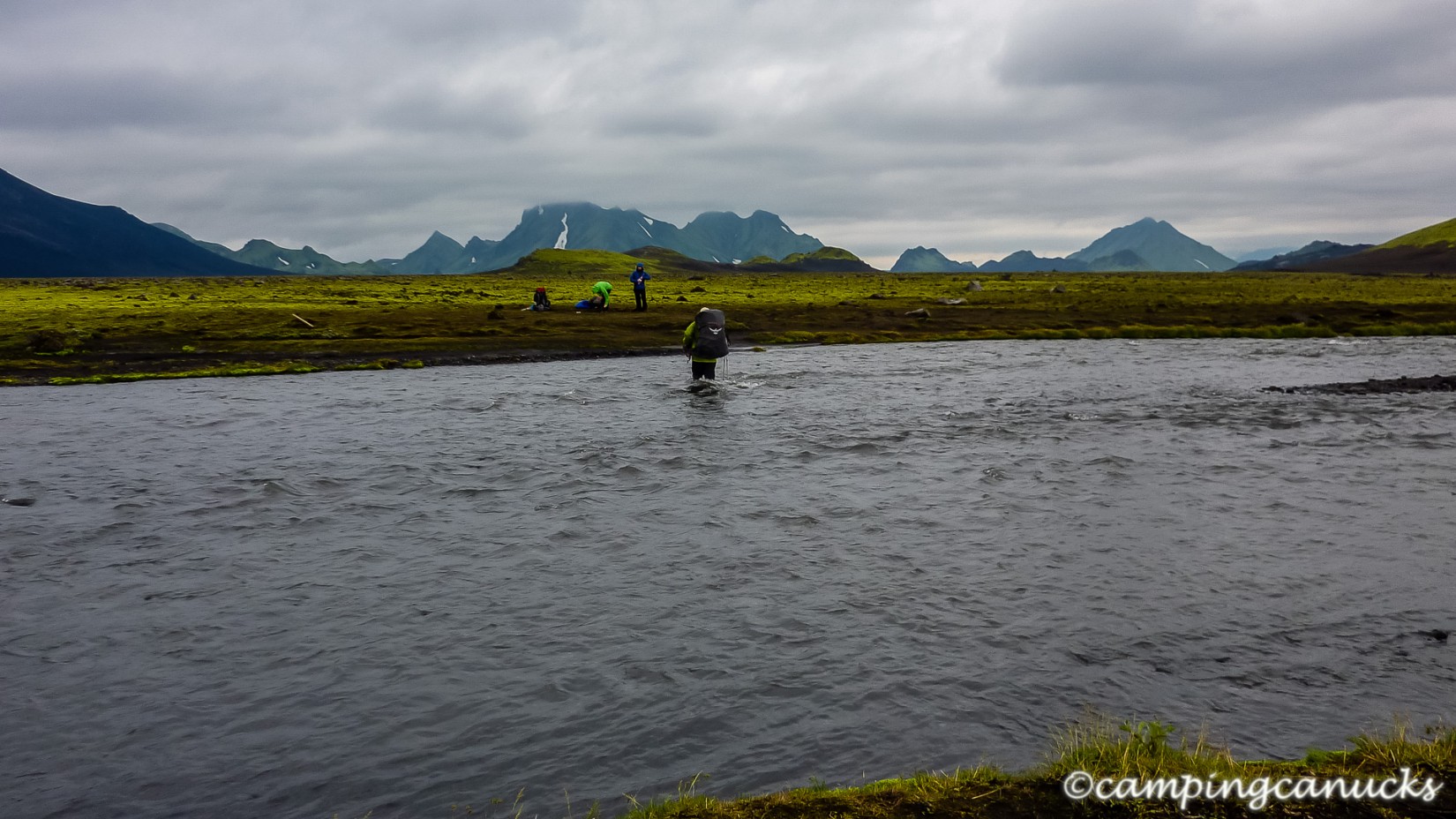 Crossing one of the rivers

After that we reached the first major bridge across a narrow and very fast river that was impassable on foot. We did see a 4×4 cross at a point further downstream and we were glad we did not have to wade across. We then entered a long flat stretch of largely barren volcanic flats. It rained throughout the day but luckily for us, it was always blowing at our backs. We’d look over our shoulders, see the rain coming, pull up our hoods, and just keep walking. The rain would usually blow by us in five or so minutes, at which time we’d pull our hoods down and just repeat the process for the next few hours. It was good to be heading south since all the people walking north into the wind and rain looked miserable as their faces got battered by the constant storms. 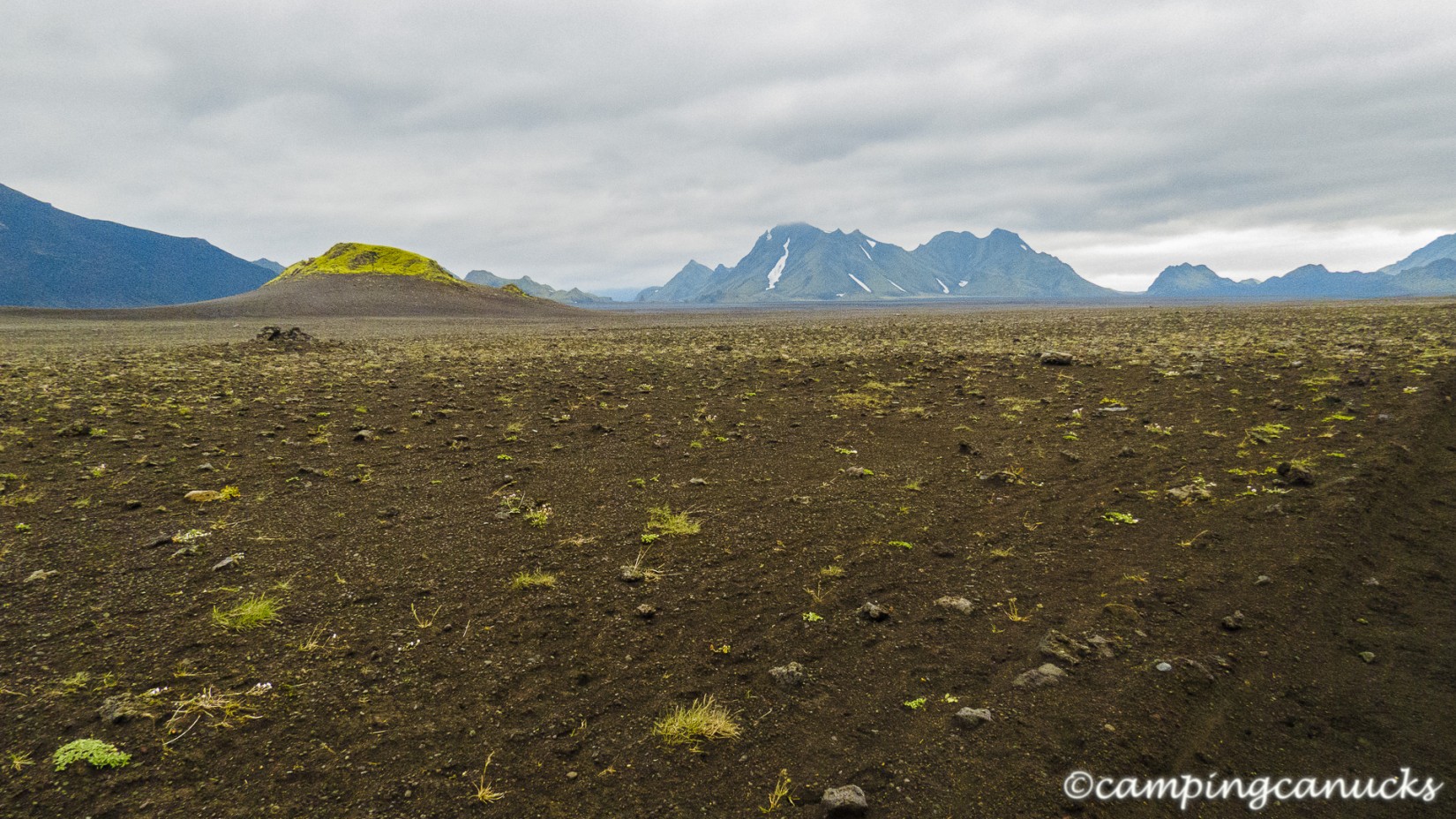 Except for mountains in the distance and tufts of flowers and grass here, there wasn’t a lot to see for the next while until we got closer to the Emstrur/Botnar camp and began to make our way through canyons and the next ranges of mountains. There was no more real elevation gain, though, as we would be largely sticking to the valleys for most of the next two days.

We rolled into Emstrur/Botnar fairly late in the afternoon and found it to be a much busier camp than the previous one. Regardless, we had no problem finding a good site in the nicely sheltered ravine below the huts. After the heavy winds of the previous night, we were happy to not be subjected to that again. 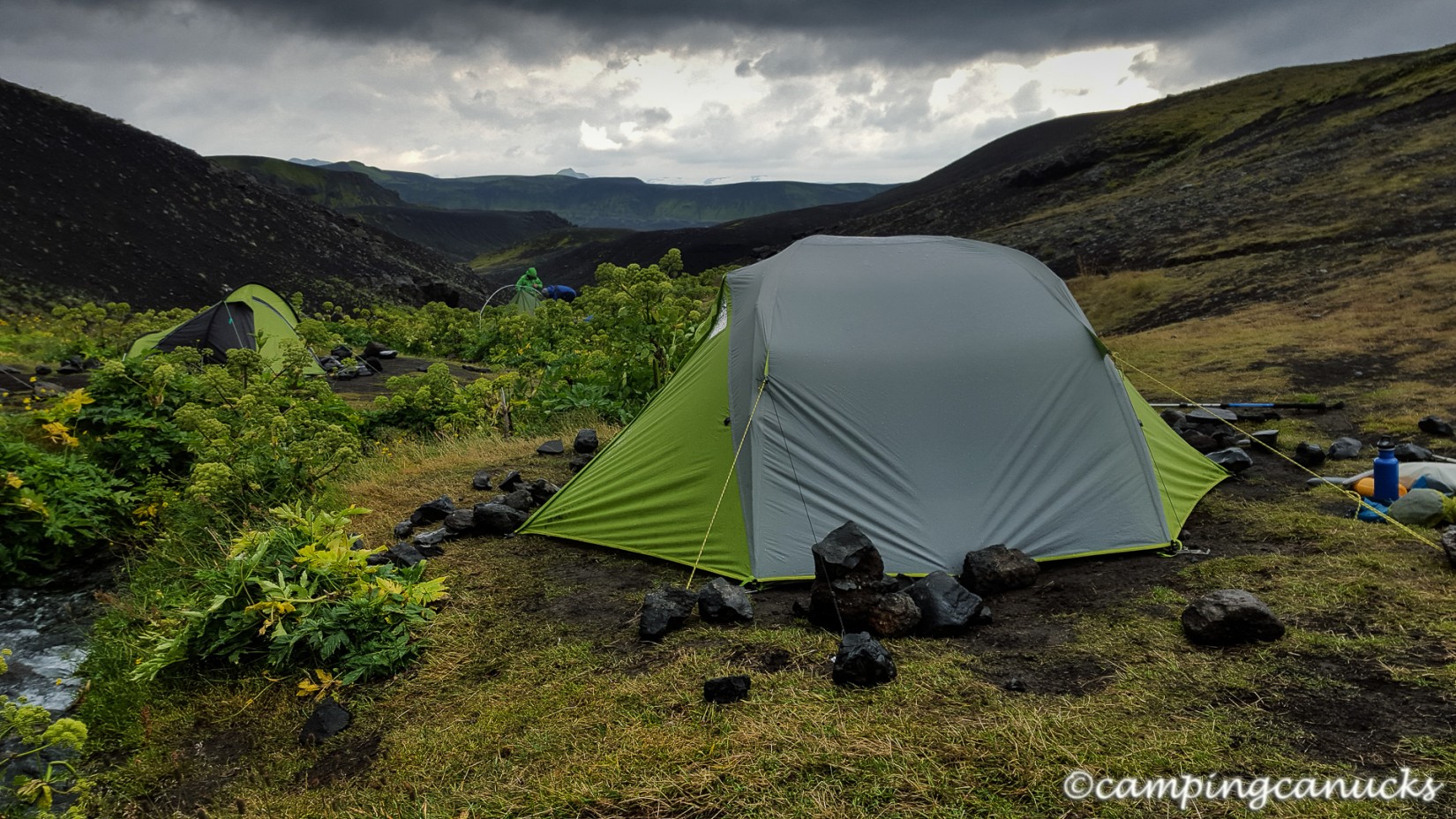 With a ready supply of fresh water flowing by our site, we were able to do all of our cooking right beside our tent. A somewhat weird feeling for those of us who spend a lot of time in bear country but perfectly normal in Iceland where there are neither bears nor mosquitoes.

As an extra treat to a mostly quiet and windless night, we got up in the early a.m. hours and went up to the huts to watch the northern lights. Even during this time of year, there was one hell of a light show to be seen and they filled much of the sky with many different colours. The wonderful show in the sky was only marred by the many noisy German men who all seemed to be gassy and were constantly farting. We were very grateful we were not in the hut.

With a great nights sleep behind us, we finally woke up to a sunny and largely clear morning on day three as we got ready to make our way along the last stretch of trail to Langidalur in Þórsmörk (pronounced Thors-mork). On this day, we did have a schedule as we needed to be in Þórsmörk by 2pm to catch a bus back to Reykjavik or we would have to spend another night on the trail. 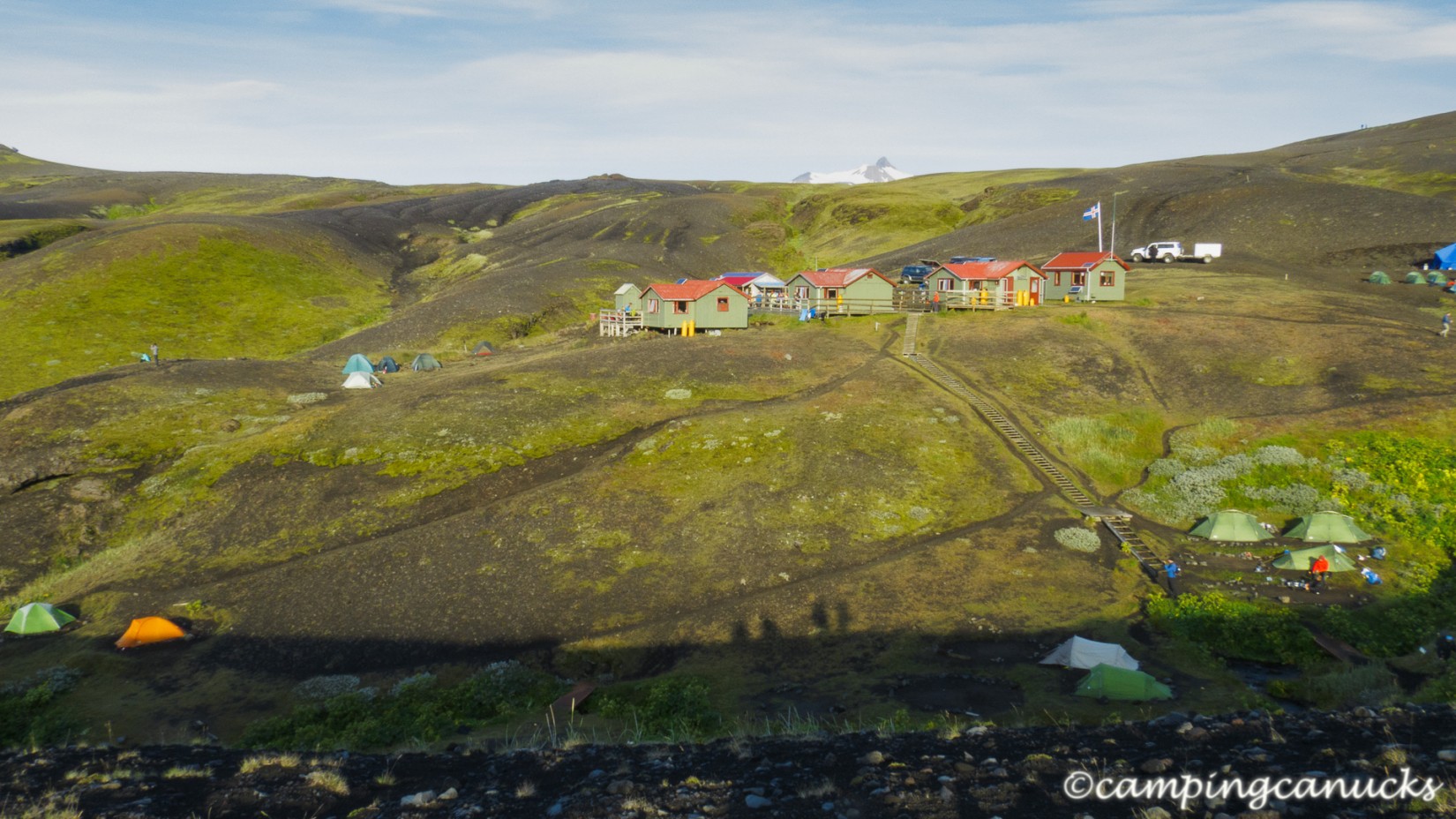 The early part of the trail took us along a section with stunning views of the nearby Myrdalsjokull Glacier. While not the largest in Iceland, this was still impressive in its own right, although we could see just how much of the glacier has melted over the years. 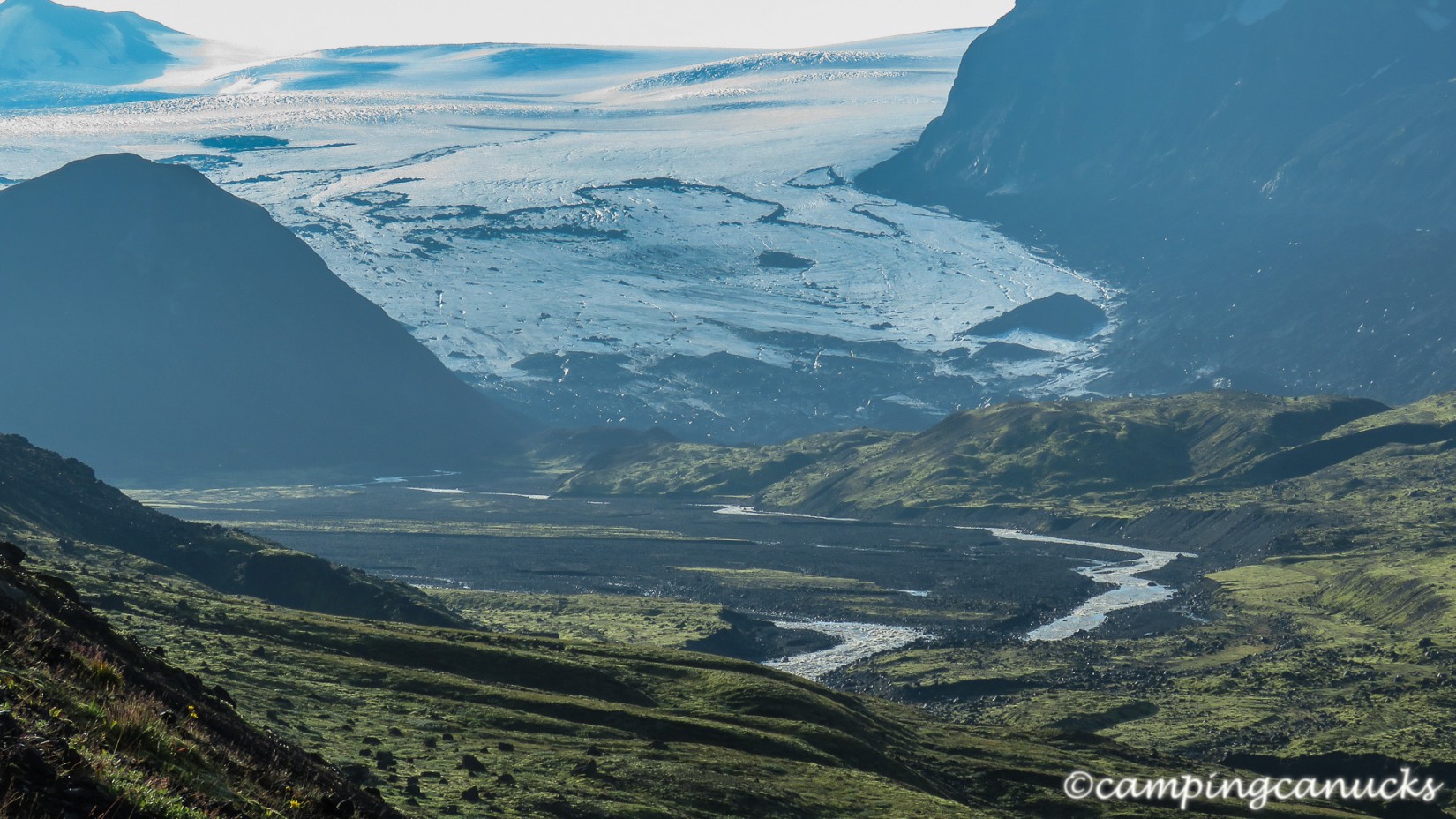 A tongue of the Myrdalsjokull Glacier

For the most part, we were back in the land of greens and vibrant colours which was a stark contrast for much of what we traveled through on the previous day. We also crossed a bridge over a very colourful canyon under which one of the glacier-fed rivers roared. 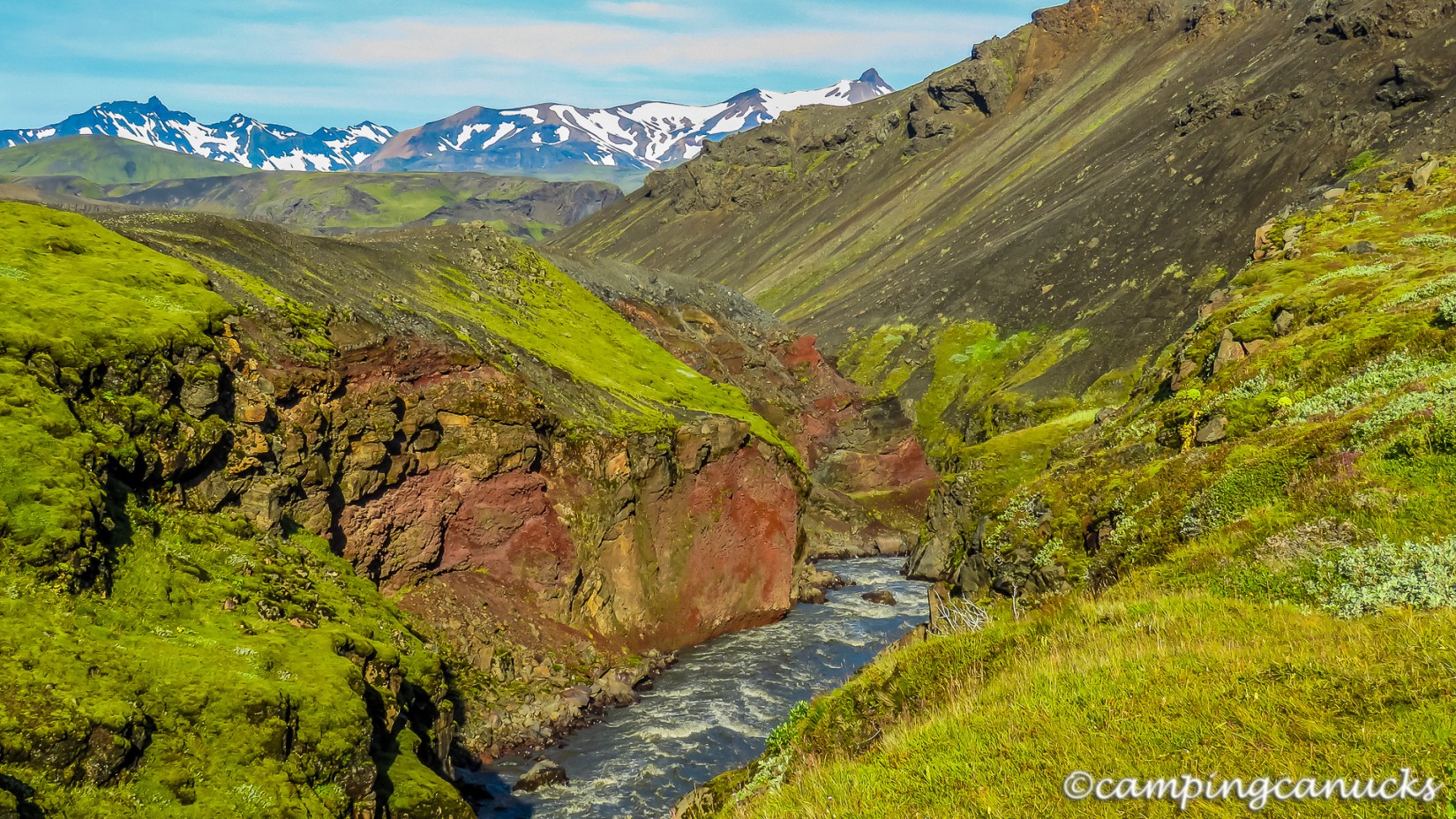 The trail now was just a nice weave up and over and around rolling hills with many scenic peaks in the distance. It had a very alpine feel to it due to the lack of trees and it was nice to be able to see long distances through the very clear air. And as the day wore on, we began to see one of Iceland’s more infamous volcanoes,Eyjafjallajökull, as we got closer to Þórsmörk. 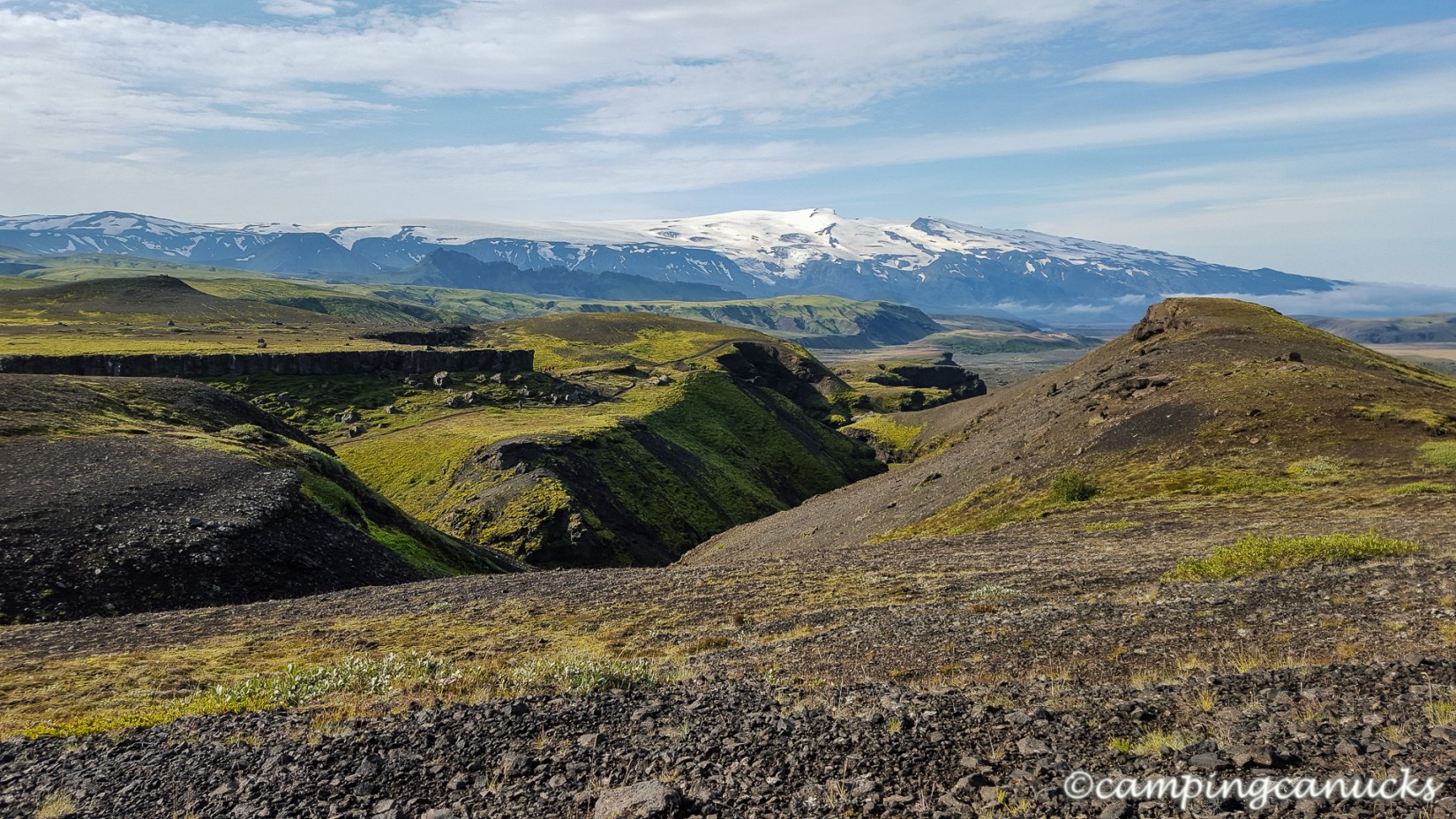 Eyjafjallajökull in the distance

There were fewer rivers to cross on this day and the ones we did cross were shallower than most of the ones from the previous two days. We got some amusement at the last crossing when a father carried his young son across the river, only to have the son complain that he wanted to get wet and it wasn’t fair that he was always carried across the rivers.

After the last river crossing, we entered one of the few forests of Iceland, such as it is. It was a dramatic change to go from sweeping vistas and views to the horizon to suddenly finding ourselves in an evergreen forest with limited visibility. It was, however, only a few kilometers before we left the forest. 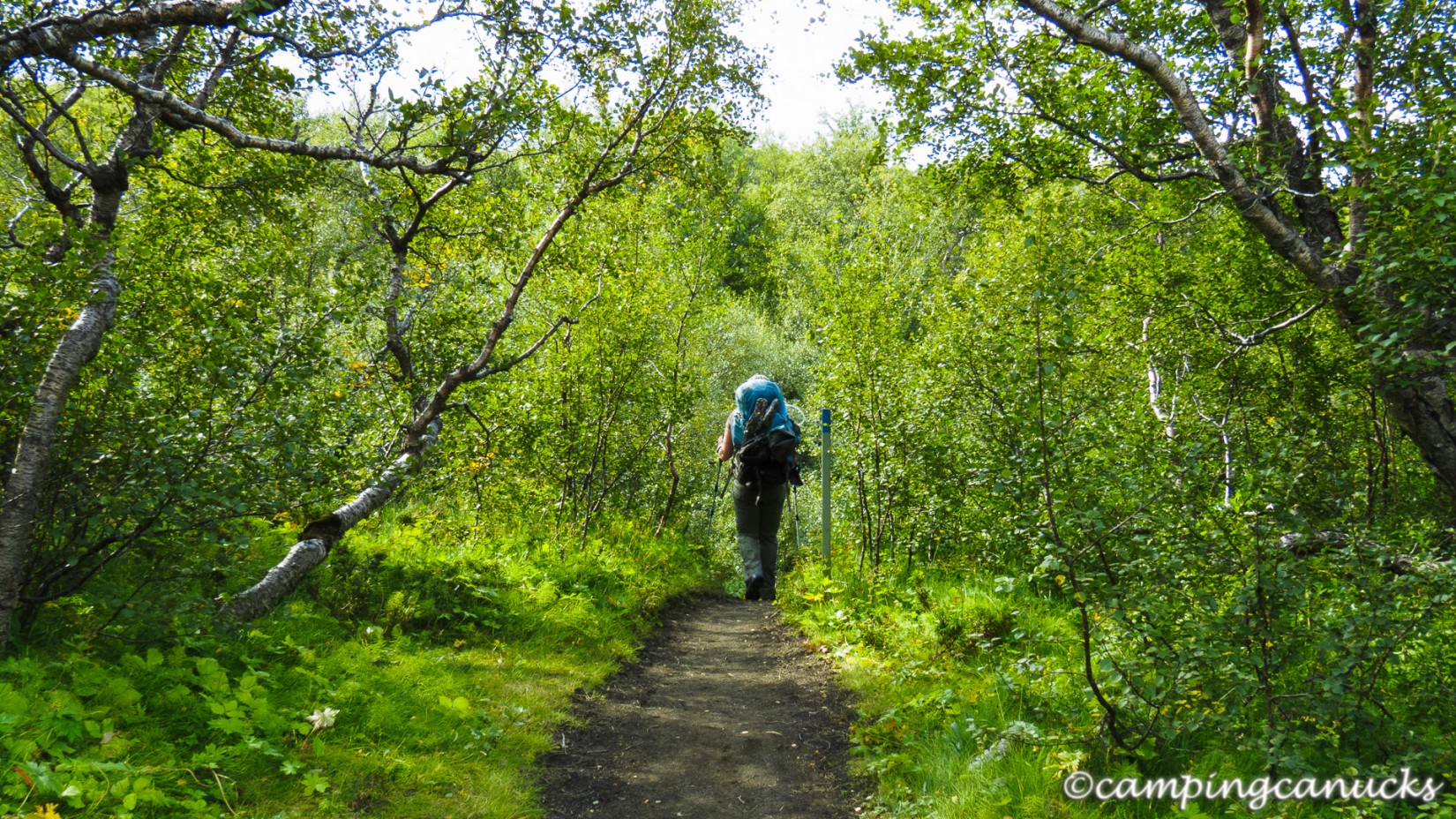 Through the forest we go

Shortly after exiting the forest, we came to a bit of a trail network that had us hitting a dead end trail and having to do a bit of backtracking to find our way before we found the trail to the camp at Langidalur. 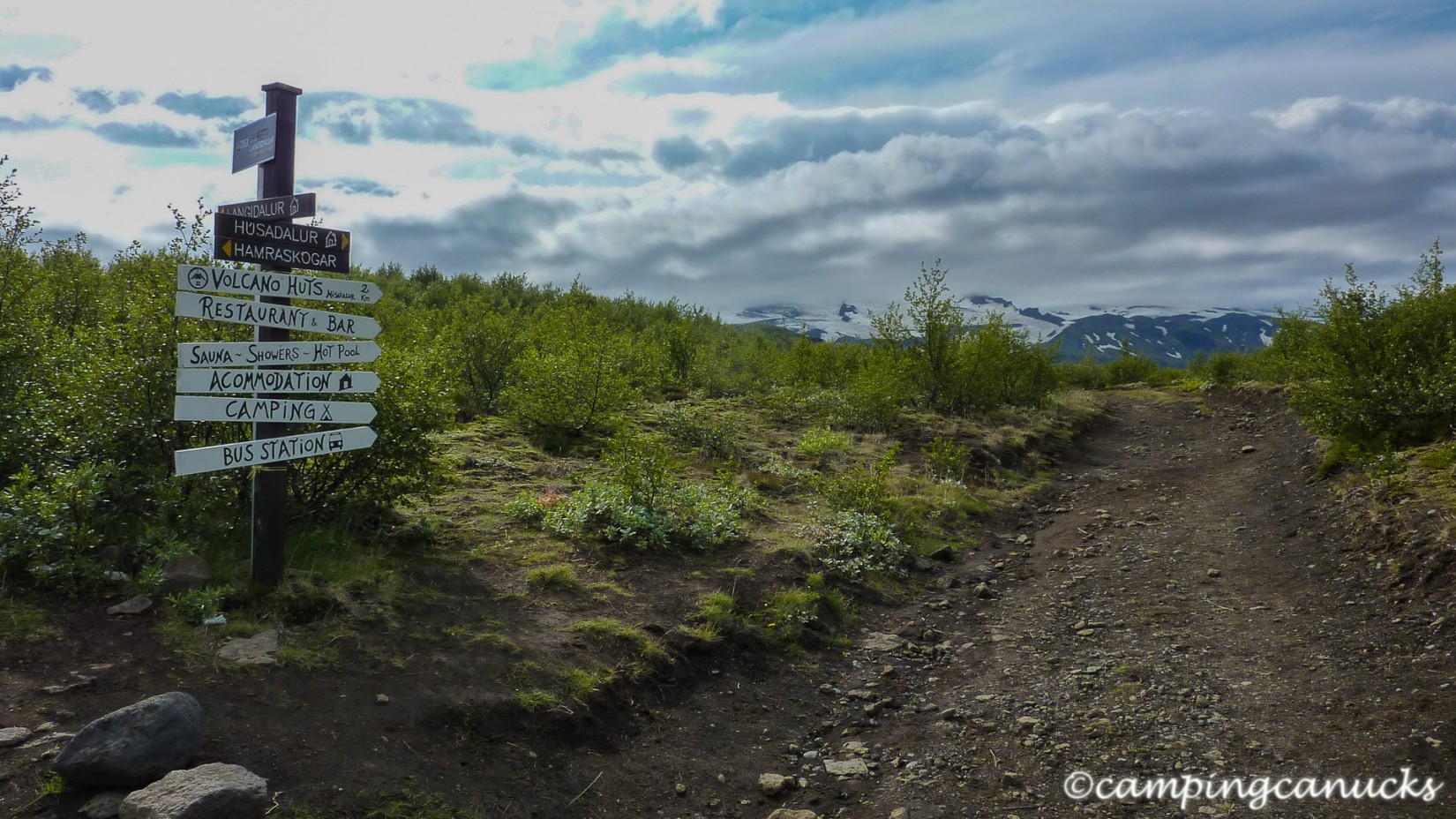 We arrived with a couple of hours to burn. We grabbed tickets for the next bus to ensure we had a seat and then settled in for a bit of down time. There was also hot food to be had here and we think it was about the first time that we paid $60 for soup and sandwiches. But after a few days on the trail, it was a welcome change from the usual trail food and well worth the price.

It took a few hours on the bus to get back to Reykjavik and it was kind of fun crossing the rivers on one of these monster buses before we were back on the ring road. We were glad to be back in Rekjavik, where Siggi was kind enough to pick us up from the bus station and take us to his home for a sushi dinner and hot showers.

We really enjoyed backpacking the Laugavegurinn. For both of us, it was our first ‘foreign’ backcountry experience, not counting the USA, and it was so much different than anything we have done in Canada. We look forward to coming back here again someday and perhaps doing the full route around Eyjafjallajökull and exiting at Skógafoss on the coast.

And perhaps we will get a bit more of that lovely Icelandic sunshine the next time we’re in these mountains so that we can enjoy the views in all its beauty.