We made a second trip to Monashee Provincial Park in July 2013. This time, we attempted to access the eastern trail just outside of the park that lies south of Revelstoke along Upper Arrow Lake. This is a long drive that leads you along a series of logging roads that eventually ends up at the Bill Fraser trail. This trailhead also puts you within four kilometers of Margie Lake and starts much higher in elevation than the Spectrum Lake trail. Unfortunately we did not reach the trail due to a rock slide blocking the road. Since the nearby Sol Mountain Lodge was not yet open for the season, no road cleanup had taken place. We briefly considered starting from here but since we didn’t know exactly how far it was to the trailhead, we elected against it. 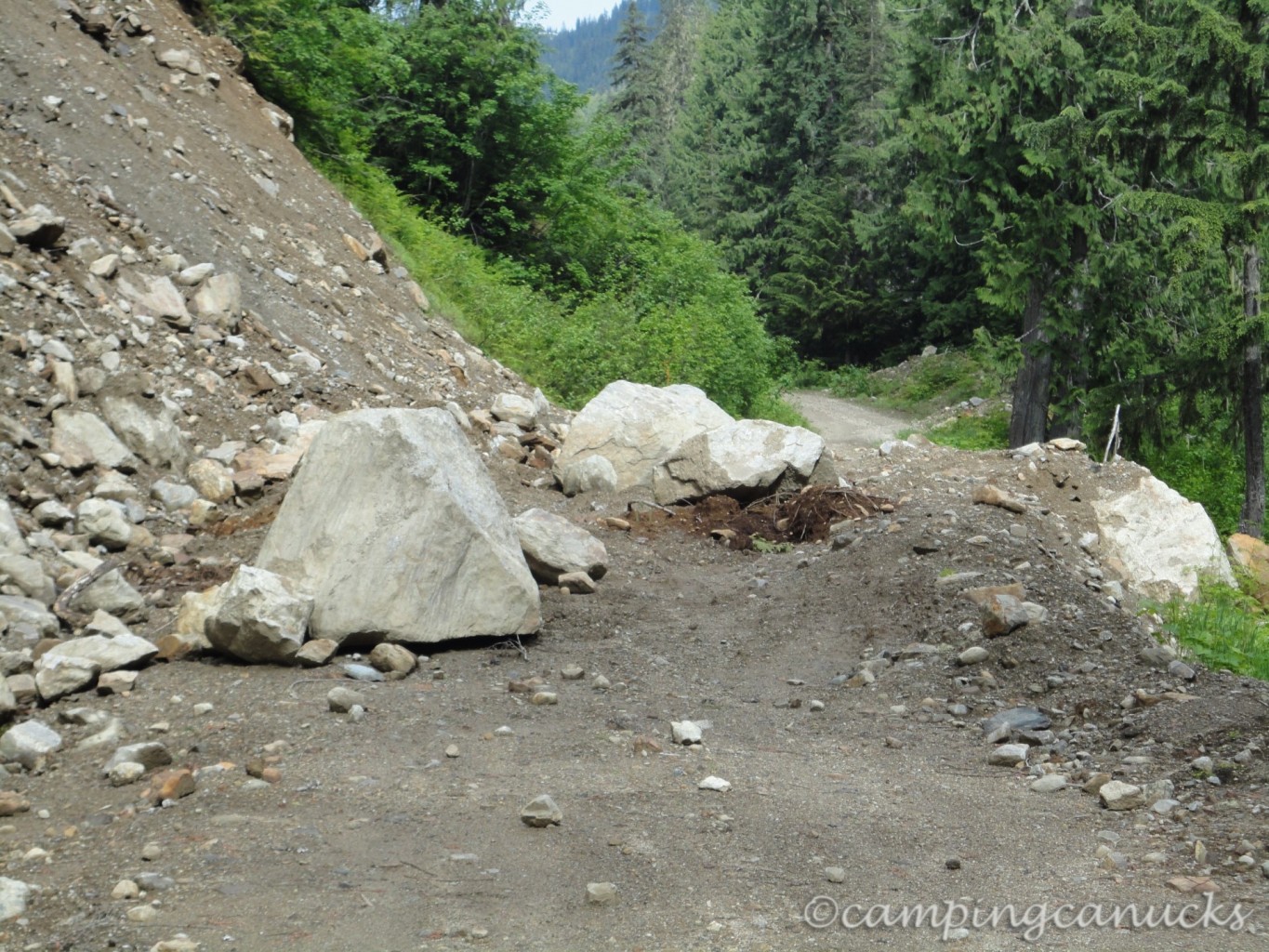 End of the line for this trip

That led us to abandon this trip and make our way to the Slocan Valley as described in our Idaho Peak blog post. In retrospect, we made the right choice as we found a lot of snow still remained at the higher elevations that early in the season.

In September 2014, we once again made our way to the eastern trailhead. We left Kamloops after work and headed for the small forestry service site at Catherine Lake to spend the night before heading for the trail the next day. Now that Sol Mountain Lodge was operating, the road was clear and we had no problem making it all the way up. We should note that you will likely want a high clearance vehicle to get over the water bars and it is going to get scratched by the large number of bushes and trees growing along the road. At times we could barely see the road through the brush. The road could use a good clearing and it’s not a bad idea to bring along a chain saw just in case. 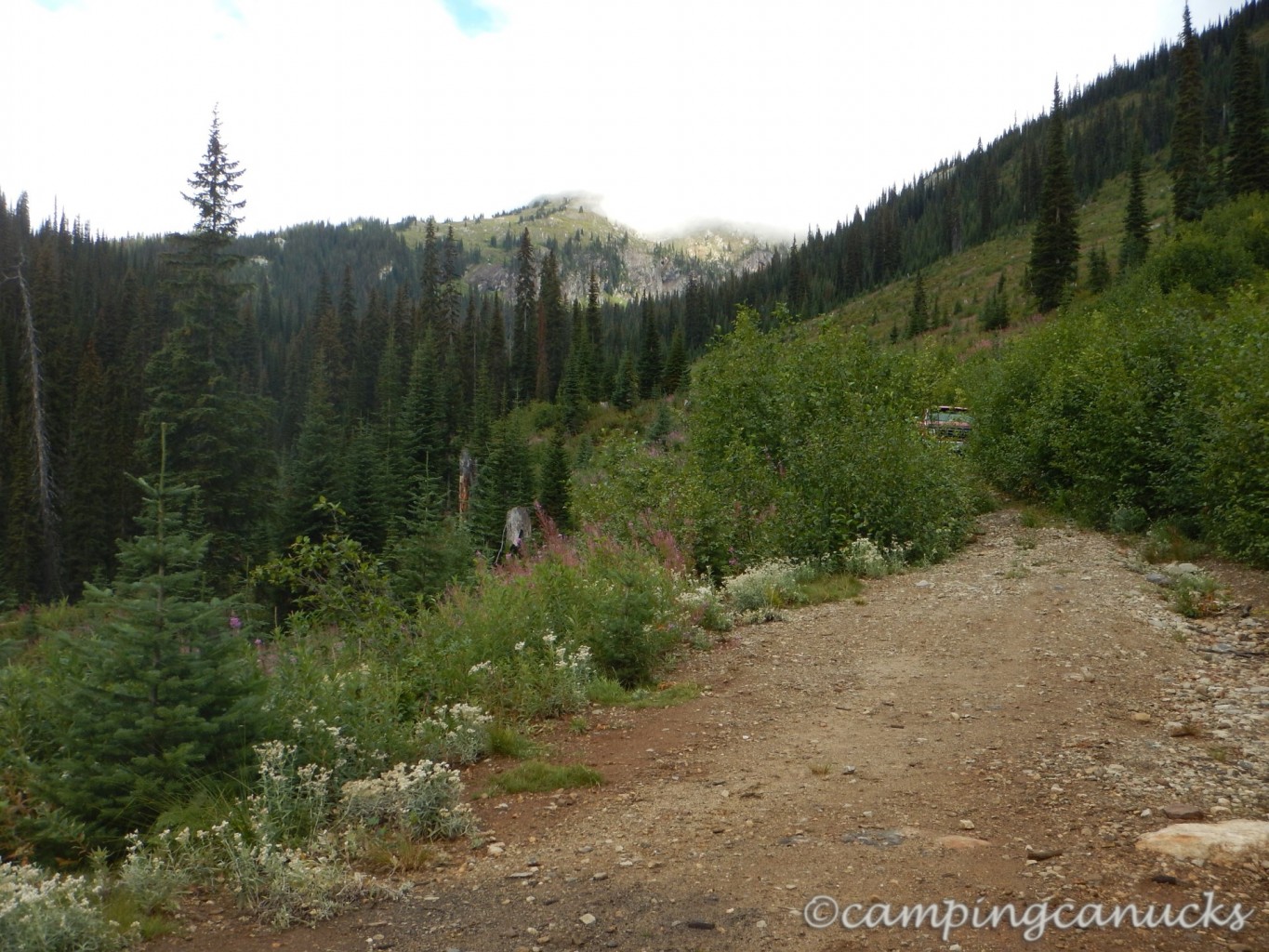 The road was washed out about half a kilometer from the parking area but there was enough room to turn around and for a few vehicles to park. After loading up and hiking the short distance to the trailhead, we were greeted by an old, weathered sign. The trail was easy to find from there. 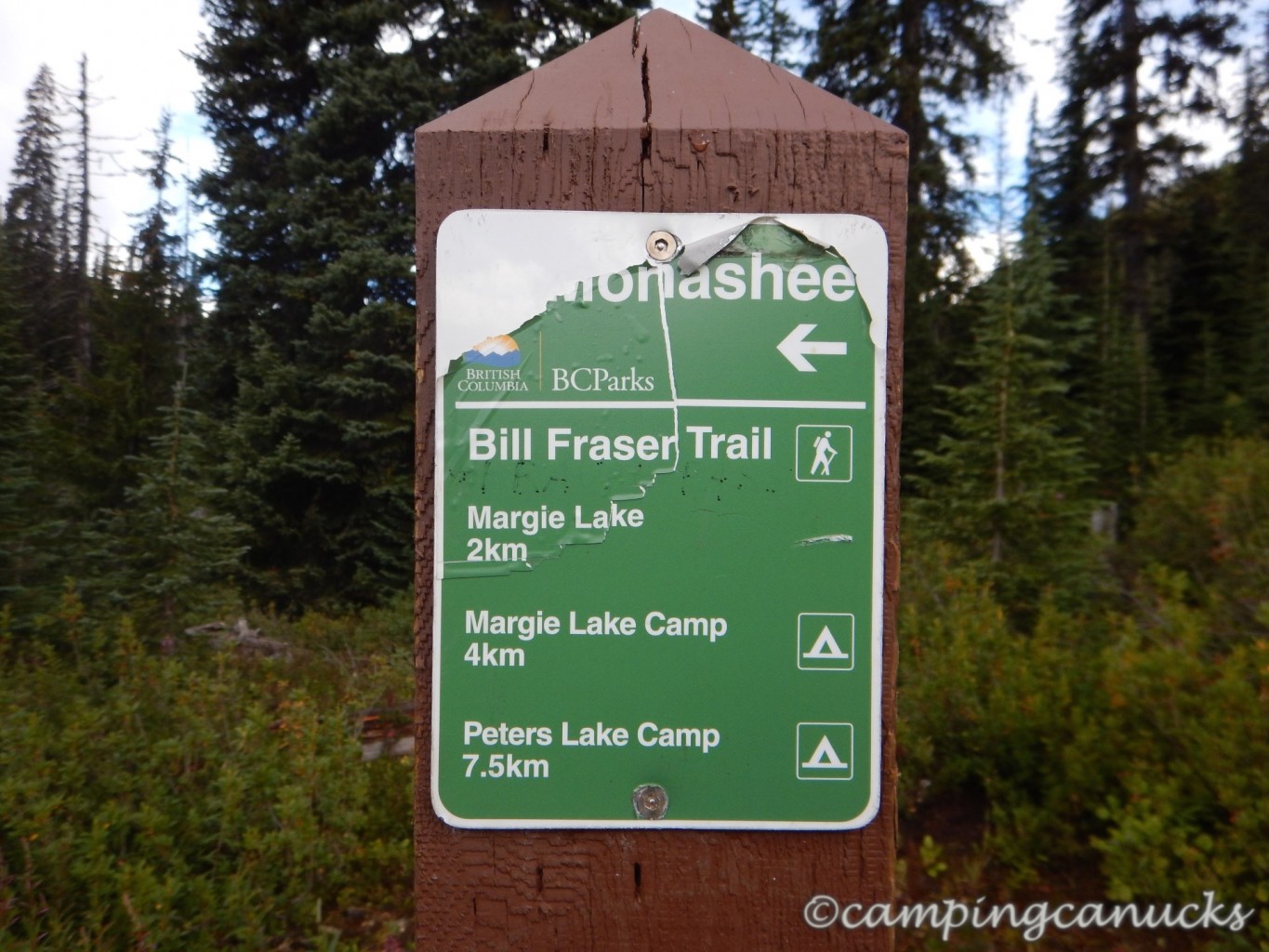 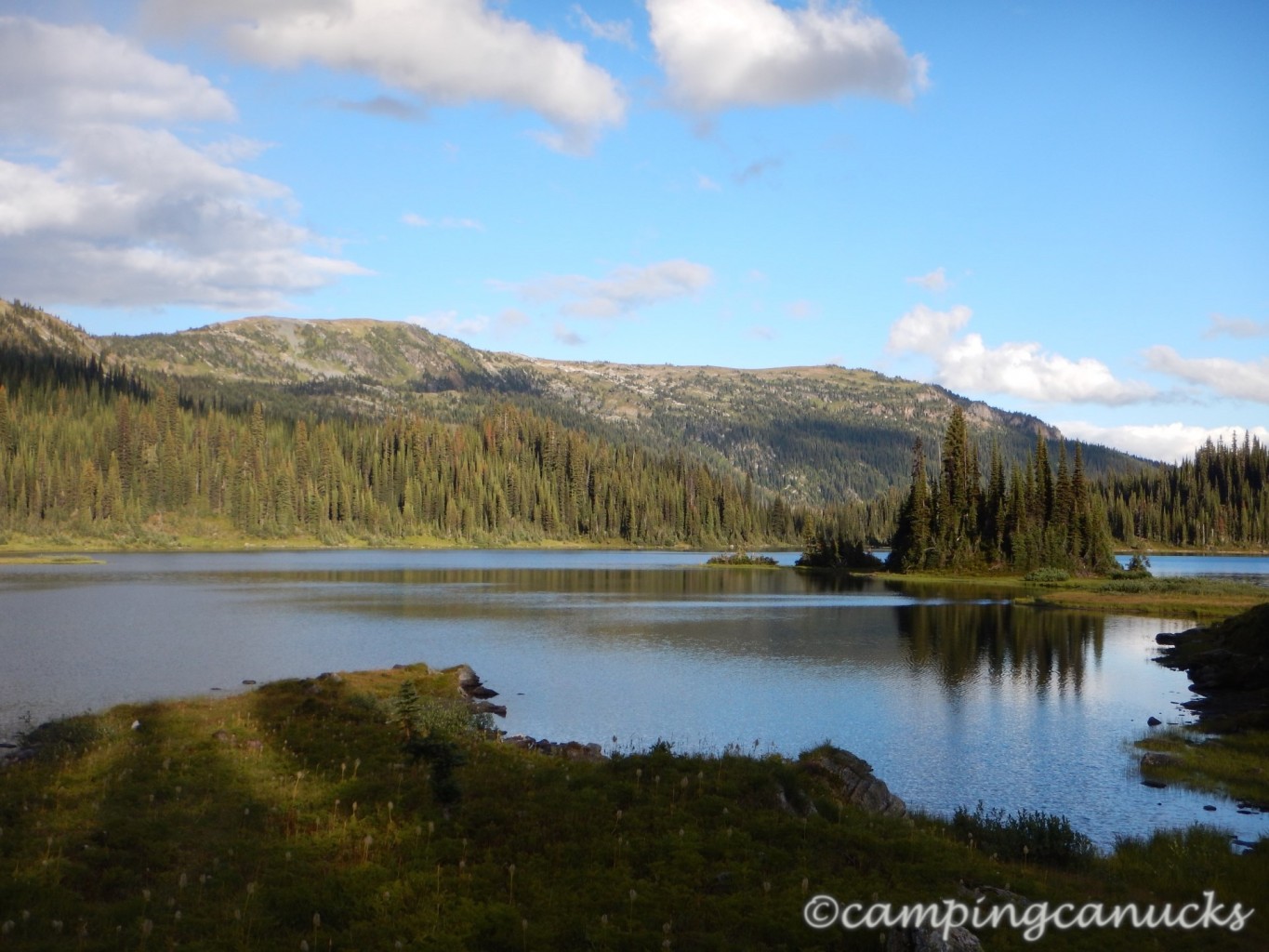 Margie Lake from the camp

We figured that we would head down the trail and spend the night at the Big Peters camp since it would put us close to Mount Fosthall. We planned to scramble the mountain the next day, weather permitting.

There isn’t really much of a trail but more of what BC Parks calls a route. Basically that means you just make your way along the valley following the occasional flagging tape you will come across. The meadows were pleasant but very wet and waterproof boots were nice to have. 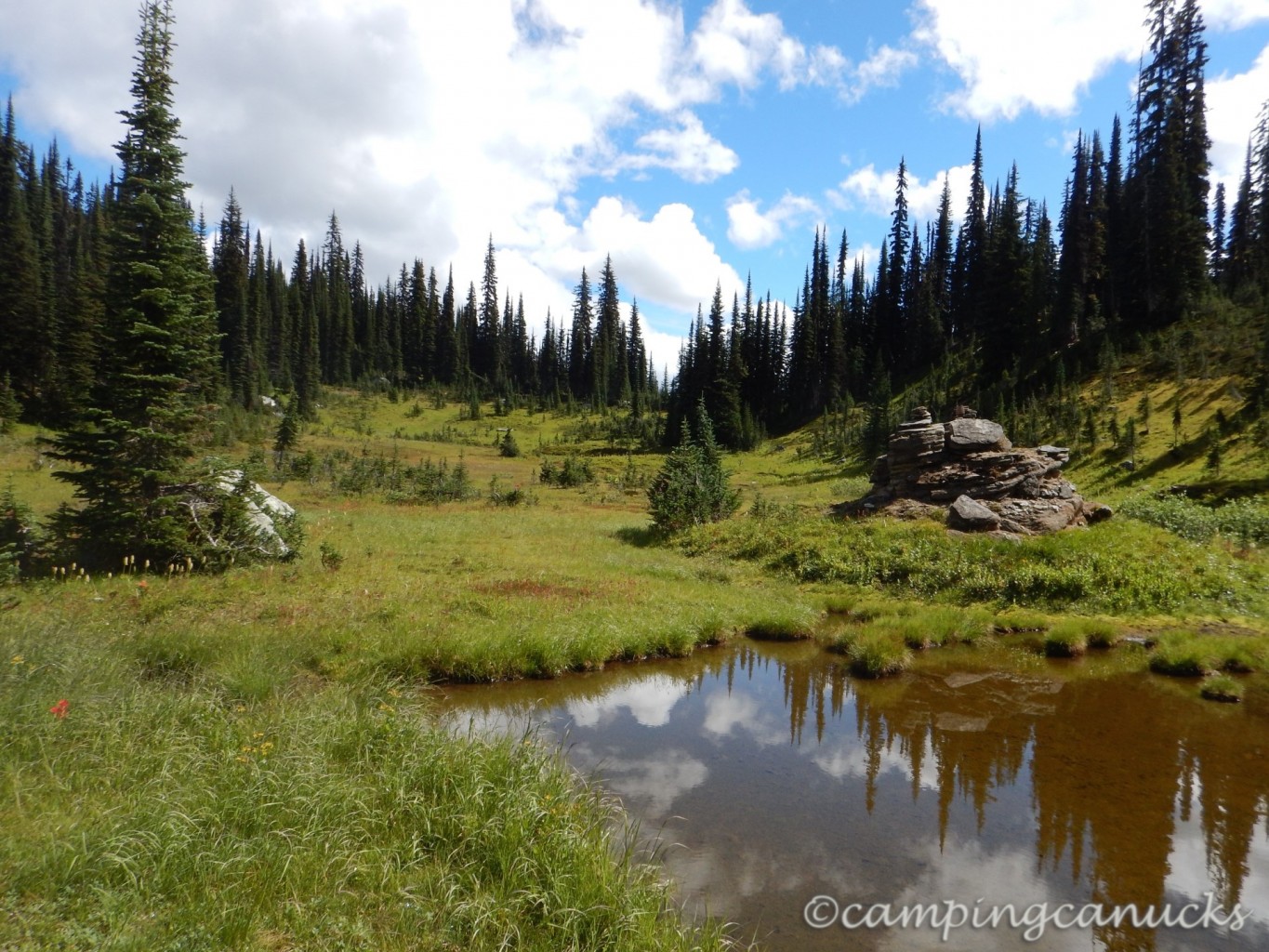 The trail from Margie to Big Peters is about 5km. We started to run into rain before we reached the camp and by the time we walked into the campsite, it was a full on downpour. Big Peters camp has both wooden tent pads and pads on the ground but due to some other people being set up on a wooden pad and then taking over other pads for their clothes and cooking stuff, we decided to take a ground pad on the western side by a nearby stream. With the rain continuing to come down, we just took cover waiting for a break so that we could set up the tent. 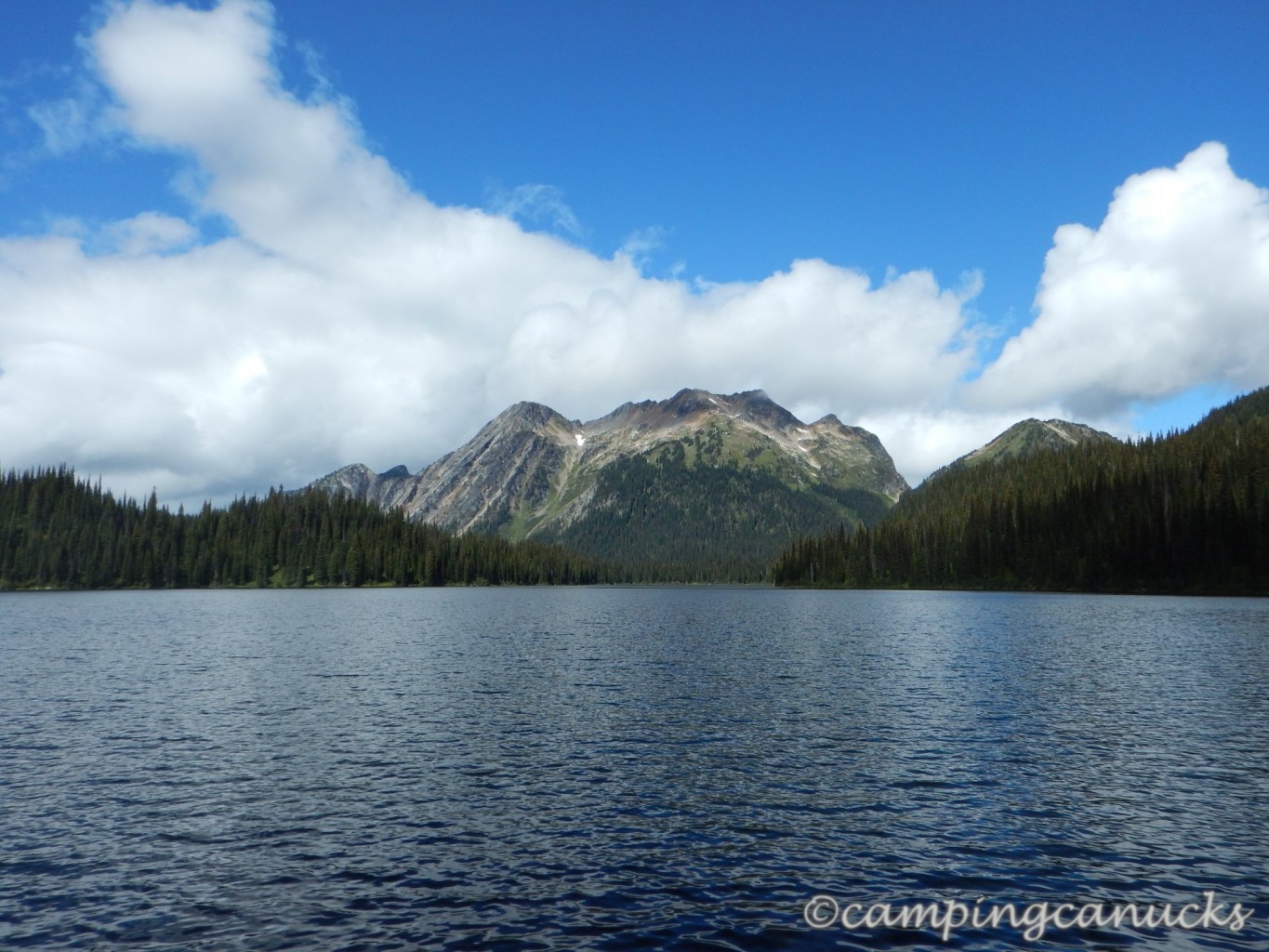 Once the rain let up for a bit, though, we decided to head back up to Margie Lake as we just liked the location better. We hiked mostly in the rain and set up at the Margie Lake camp during another break in the weather. We were glad we had brought along our tarp as it continued to rain on and off quite a bit over the next two days. 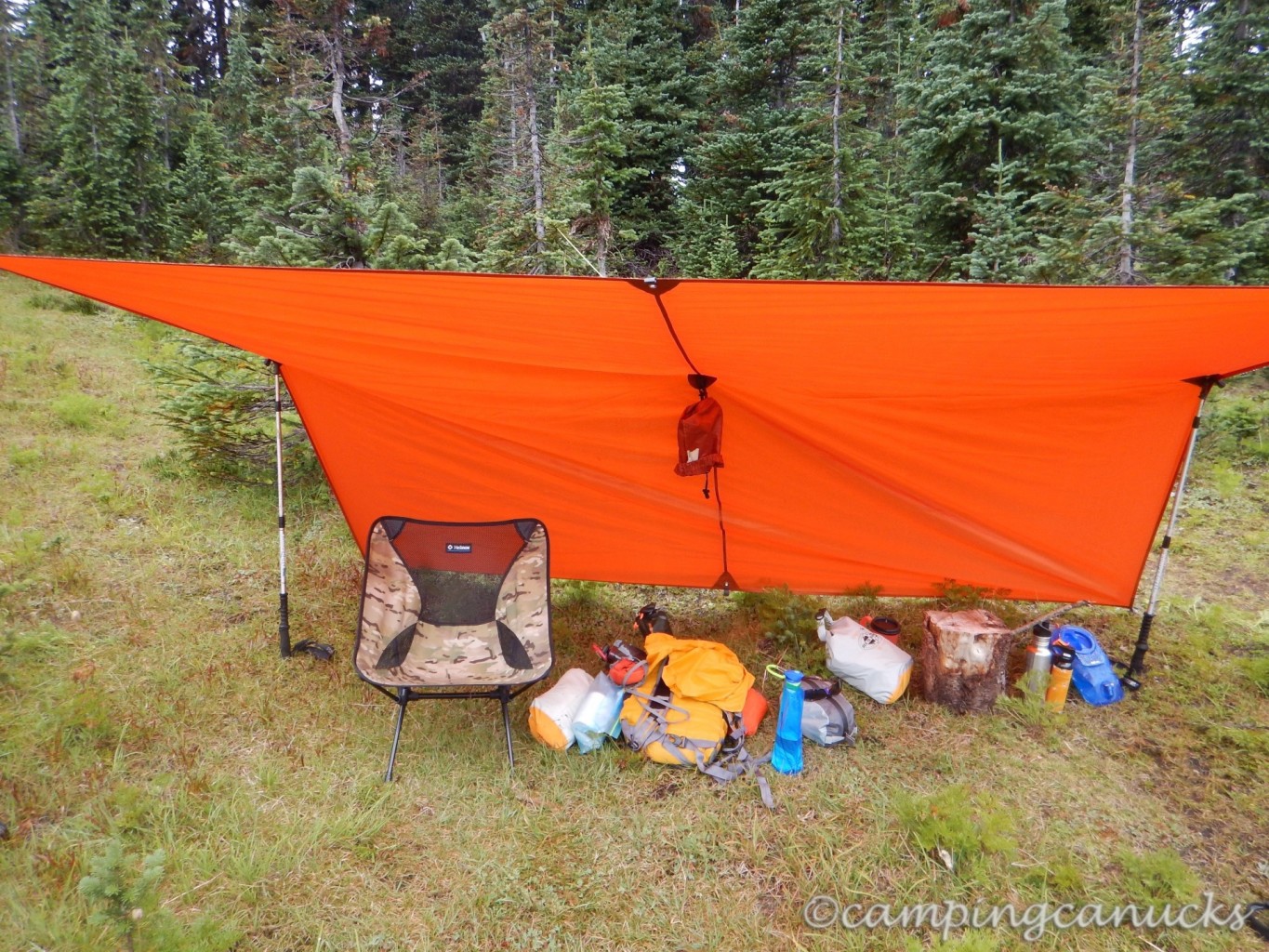 We spent a lot of time under the tarp

We spent much of the first night huddled under the tarp as it continued to rain. By about 8pm, the first thunderstorm rolled in, so we made our way into the tent and just rode out the weather.

Morning brought about mixed weather and we ended up just waiting it out until later in the morning when the rain stopped for a couple of hours. By this time we had pretty well ruled out getting to the top of Mount Fosthall as it was completely socked in and without clear skies at the top, there seemed little point in heading that way. We decided to head for Fawn Lake instead as the weather on the north side of the valley seemed to be more promising.

The route up to Fawn Lake was a few kilometers from Margie Lake along the trail to Big Peters Lake. To find the trail, it’s a matter of spotting the flagging and sometimes we ended up a bit off course when we couldn’t find the route. It was wet going but eventually we found our way above the treeline and the views started to open up. 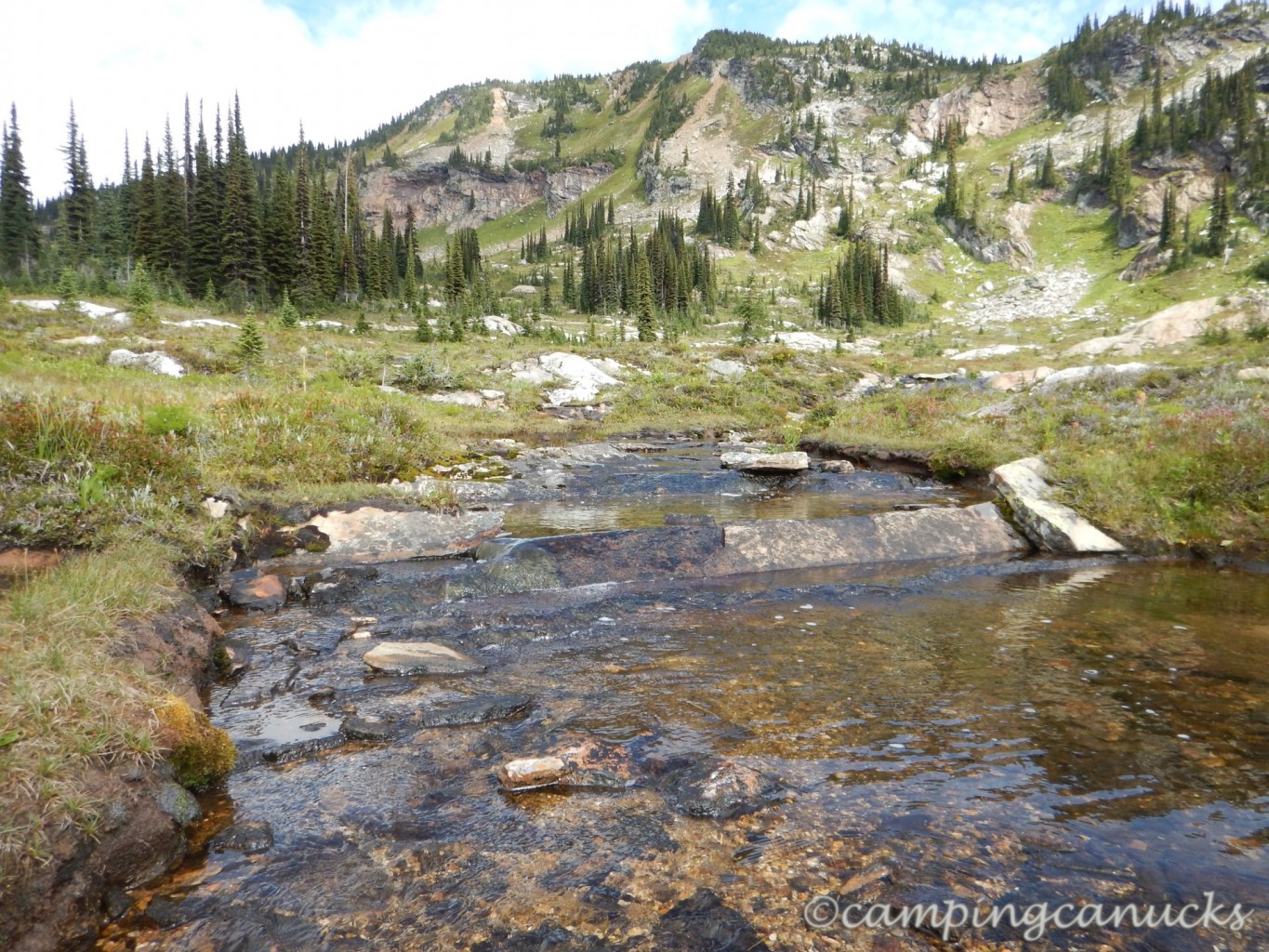 The stream coming down from Fawn Lake 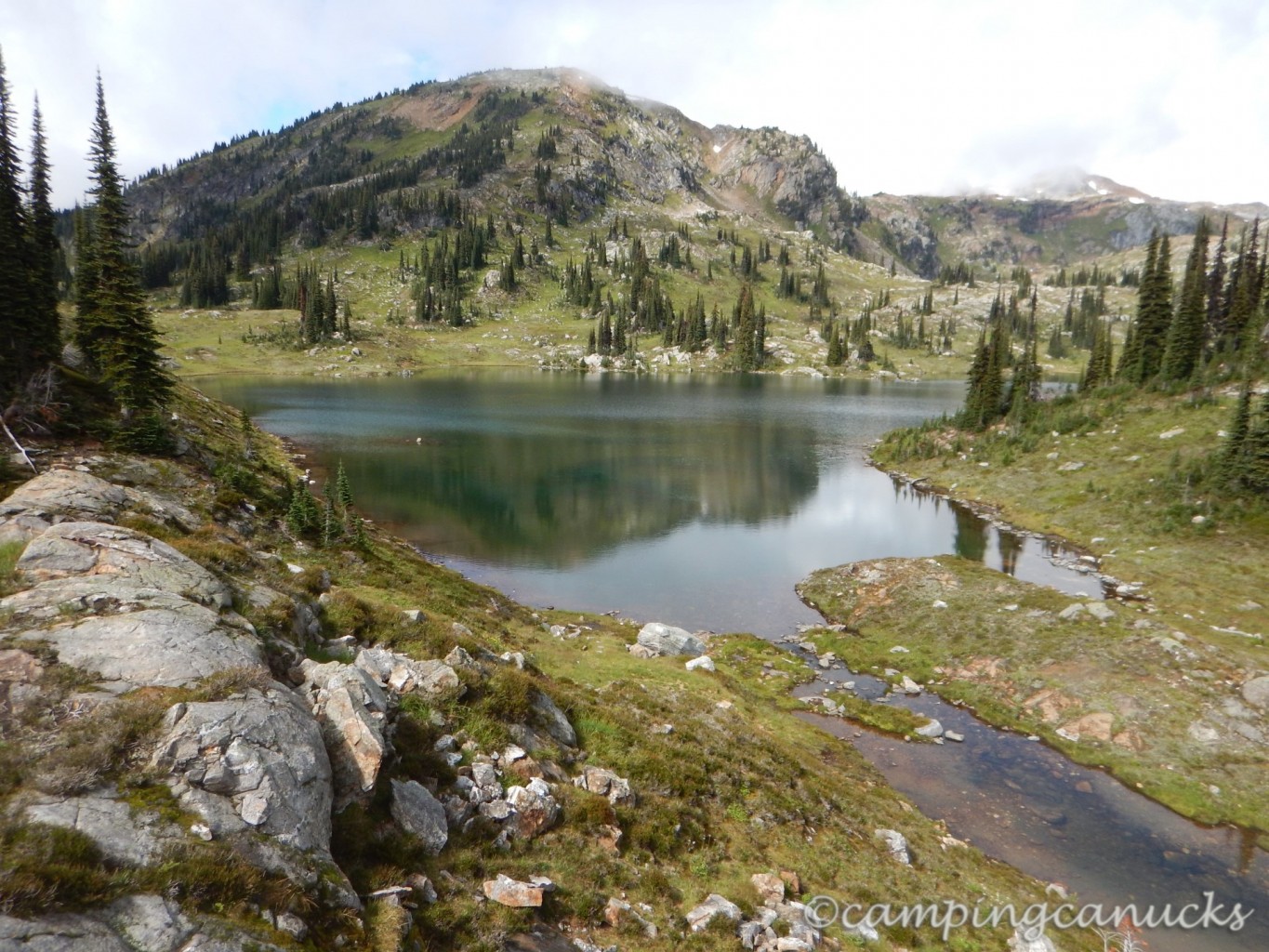 Fawn Lake from the eastern side

We lingered for a while and enjoyed lunch on the banks of the lake. 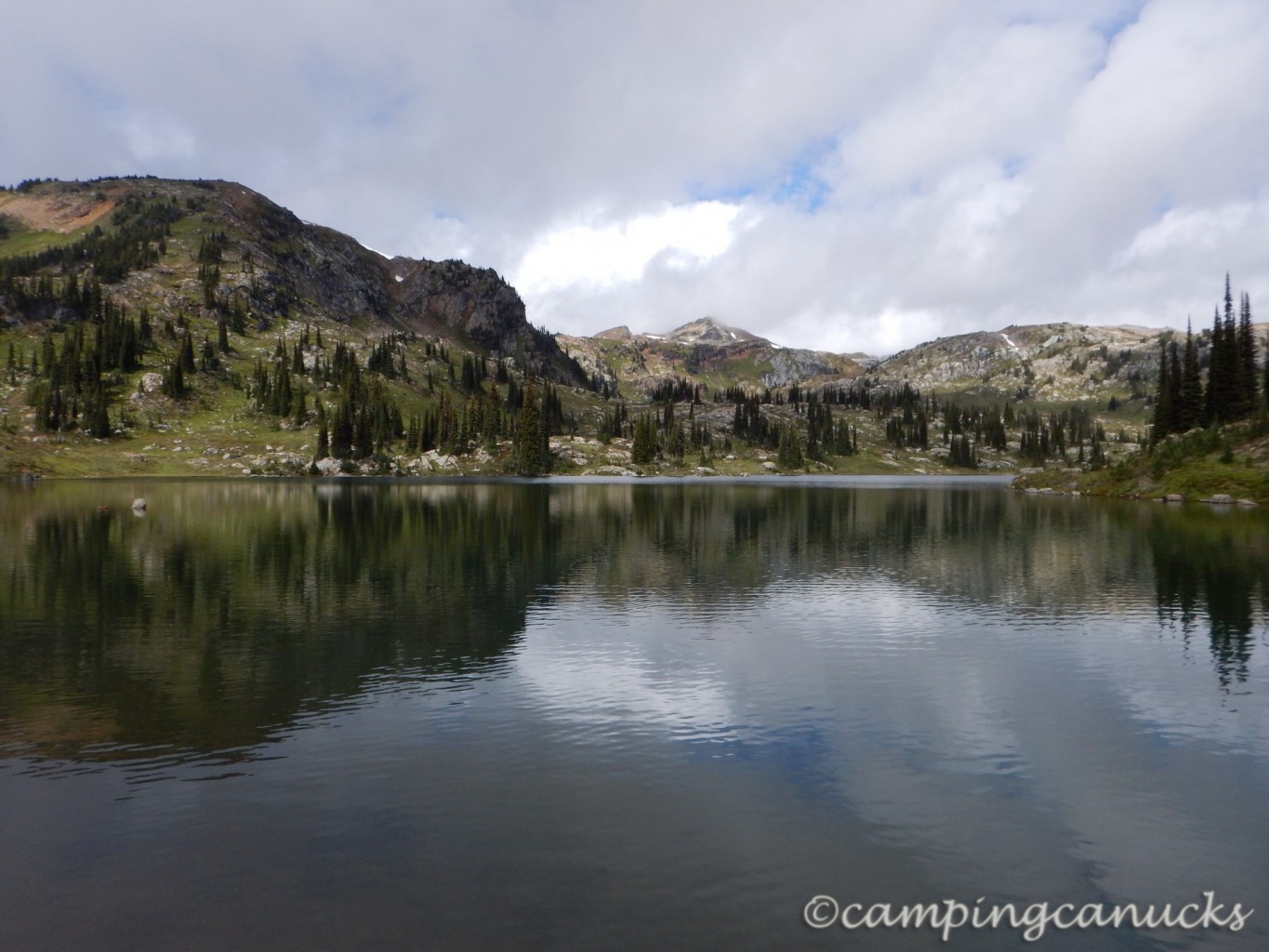 Looking towards the Valley of the Moon

From here, you can skirt around the lake and head out towards the Valley of the Moon or bag one of nearby peaks. With the weather looking a bit iffy, we elected not to head further up the valley but instead to scramble our way back to Margie Lake along a nearby ridge. There were plenty of rocks and slides along the way but it wasn’t too bad of a hike up. 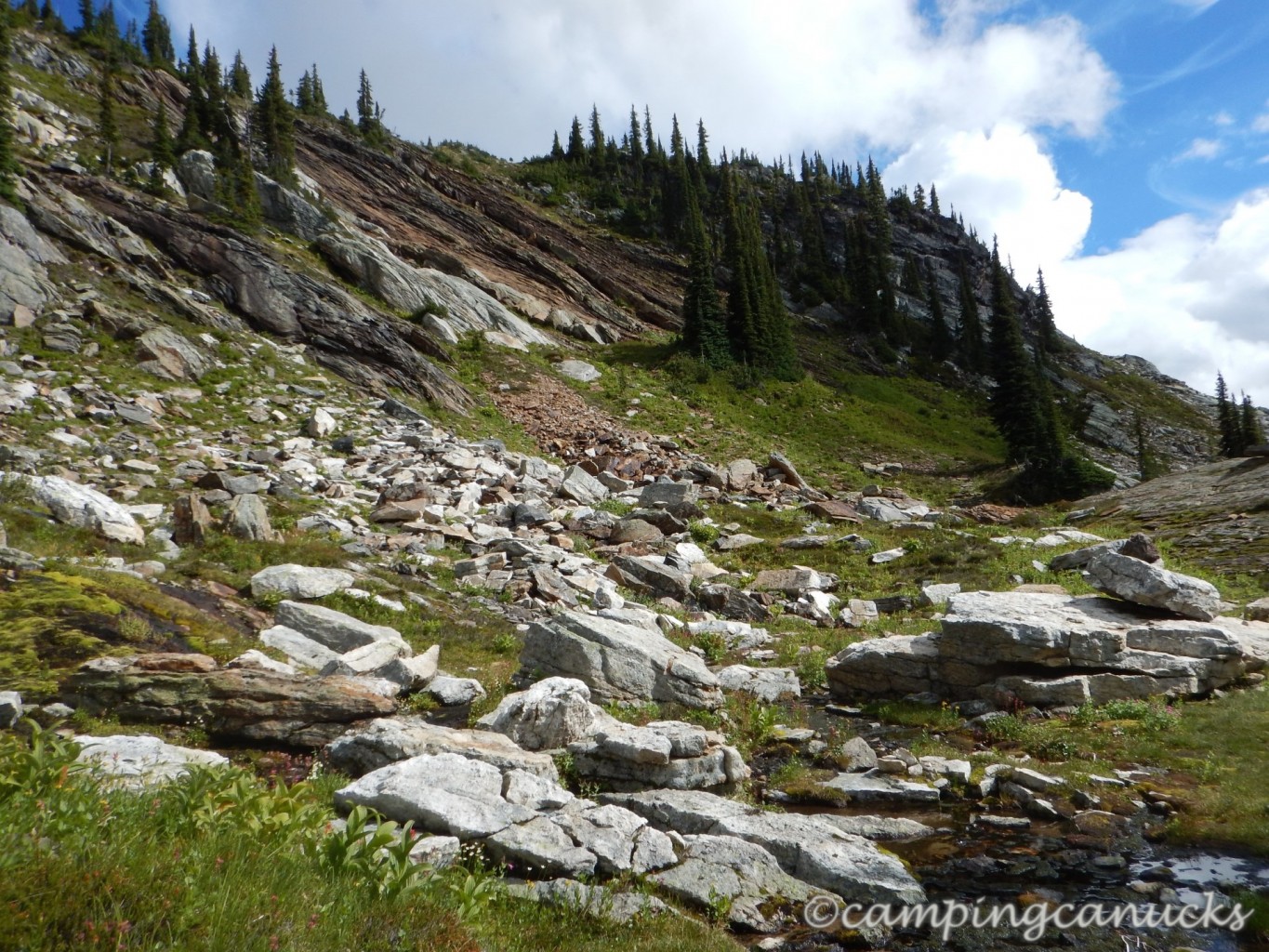 Our route to the ridge

Once we got up onto the ridge, the clouds around Mount Fosthall broke up for a bit and we were able to get some good views. We kind of wished that we made our way over there but that will have to be another trip. 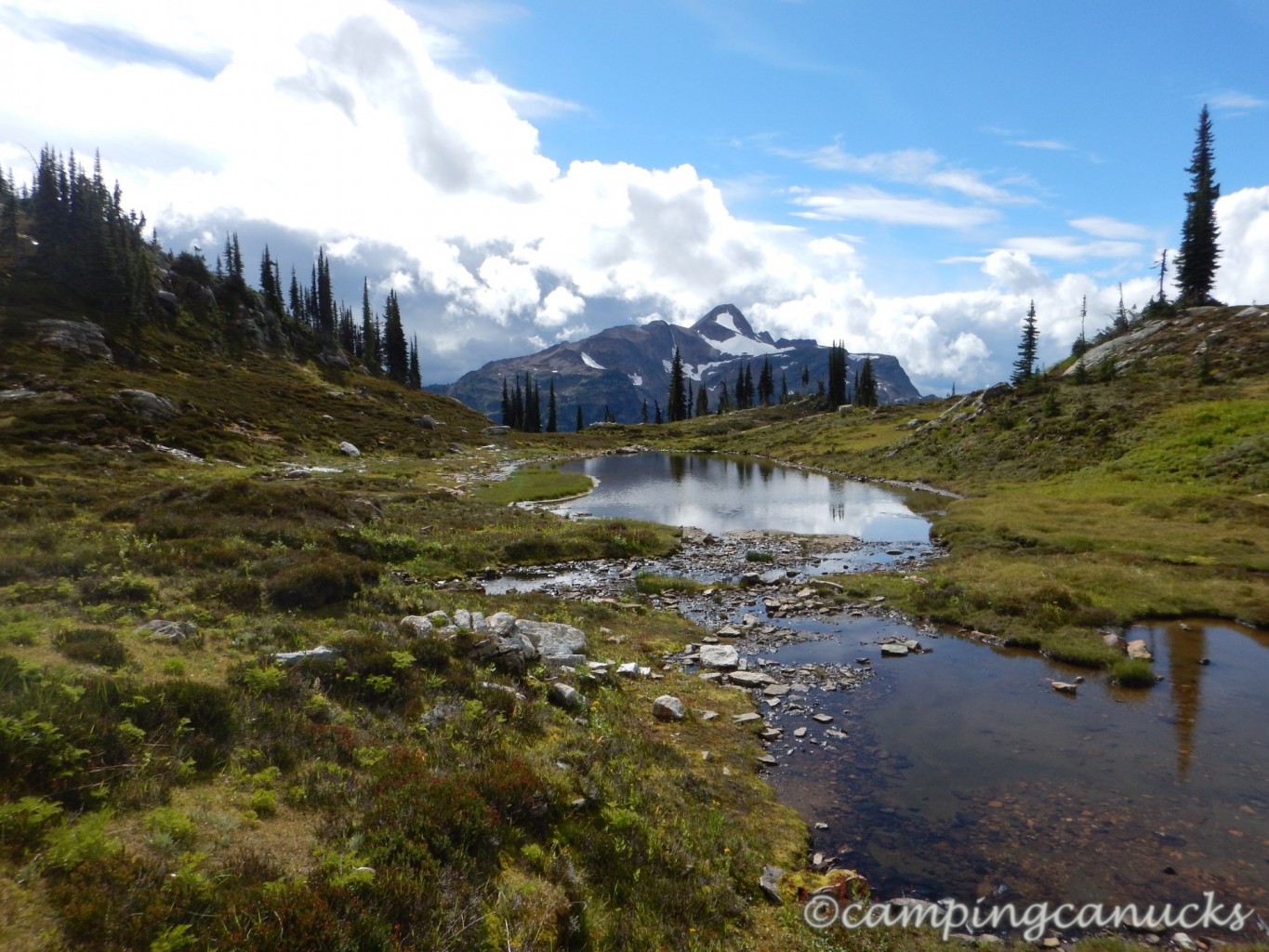 Mount Fosthall in the distance

As we continued higher up the ridge, we realized that we were on a good route to get to the top of Order Peak and Moderation Peak further along the valley. We kept picking our way up and just enjoying the views as we ascended up the ridge. 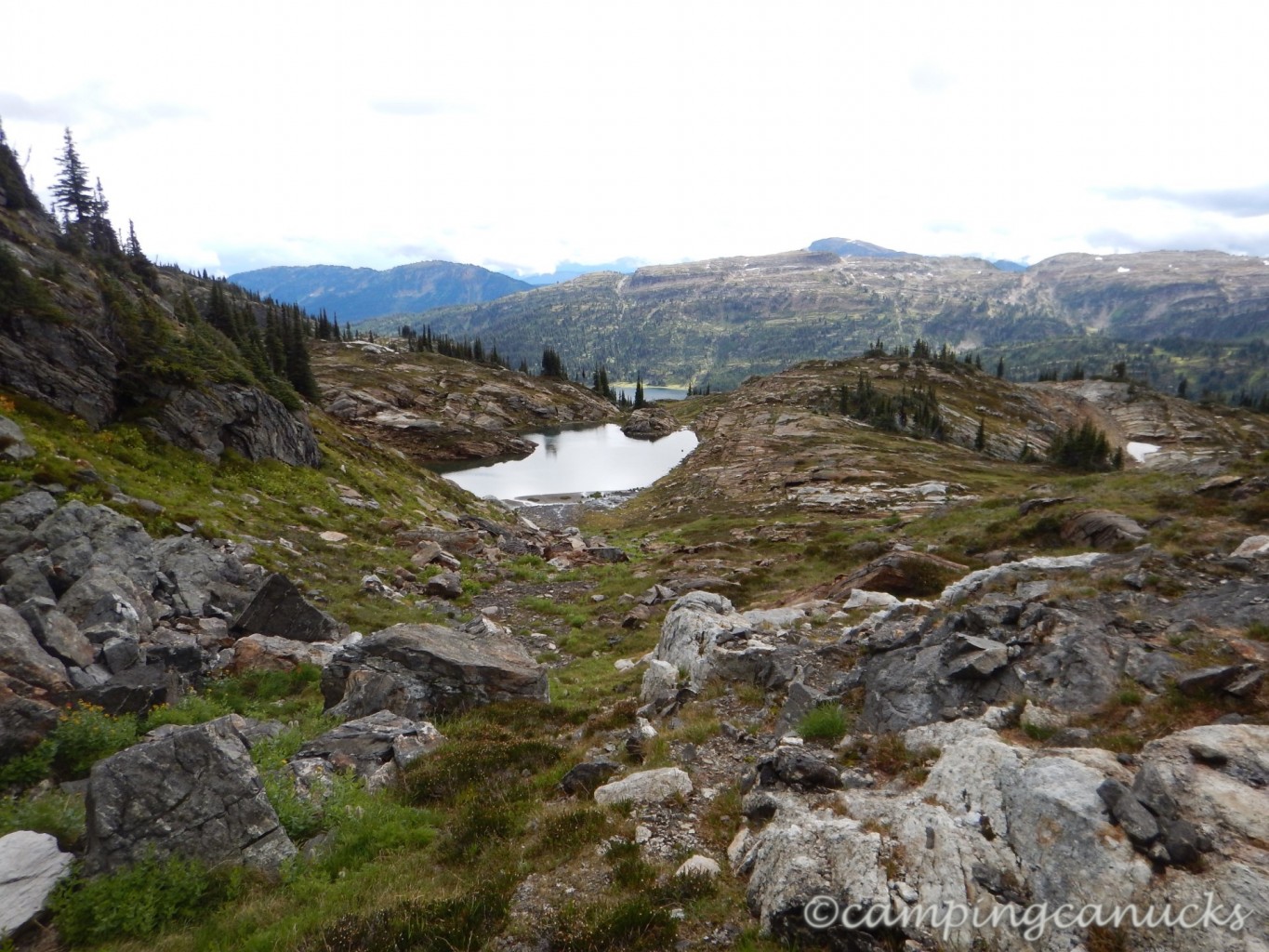 One of several alpine lakes along the way

As we got nearer to the top, we saw that another rain storm was heading our way. We were reluctant to give up our trip to the top but with the valley and peaks getting socked in again by all the fog from the storm, we headed on our way back down the mountain to camp. As there were no trails around, we just bushwhacked our way back down. It was a bit rough going and very wet once the rain really set in again.

For our second evening, we again just huddled under the shelter and stayed dry. Some luck was with us, though, as it actually cleared up later in the evening and we were able to sit by the lake and enjoy an evening in the mountains with nothing to interrupt us.

We look forward to going back to Monashee Park another time, particularly since we have not yet been able to bag Mount Fosthall. Aside from Fosthall, there are also a lot of opportunities to scramble to other peaks in the area for anyone willing to do a bit of bushwhacking up into the alpine. We look forward, as well, to exploring the Valley of the Moon on a later trip. Being that it’s such a long drive to the eastern side of the park from our home, it’s likely we’ll go back to the Spectrum Lake trail and make our way up from there.