Our original plan for the 2013 July Long Weekend was to backpack to Big Peters Lake in Monashee Provincial Park, but we encountered a rockslide that blocked the road in. So we had to move on to plan B, which resulted in us heading to New Denver and Silverton, in the West Kootenays. After a long drive along the west side of Arrow Lake, we made our way across on the Arrow Park ferry and headed north to Nakusp. We were concerned that it would be difficult to find a campsite, but the Rosebery Provincial Park campground near New Denver turned out to be a nice spot that was surprisingly empty. Everyone must have flocked to the lakeside sites instead, as every other campsite we had seen looked pretty busy.

After spending a day touring around the area, we noticed a fire watchtower up on Idaho Peak, which was too tempting not to try to hike up to. The road up the mountain was quite narrow and we were glad we didn’t meet any vehicles coming down as there are few places to pull to the side. We were still about 3km from the top when we came to a lot of snow. We parked the truck and debated whether to continue on foot, but it being a warm sunny day we decided to see how far we could get. 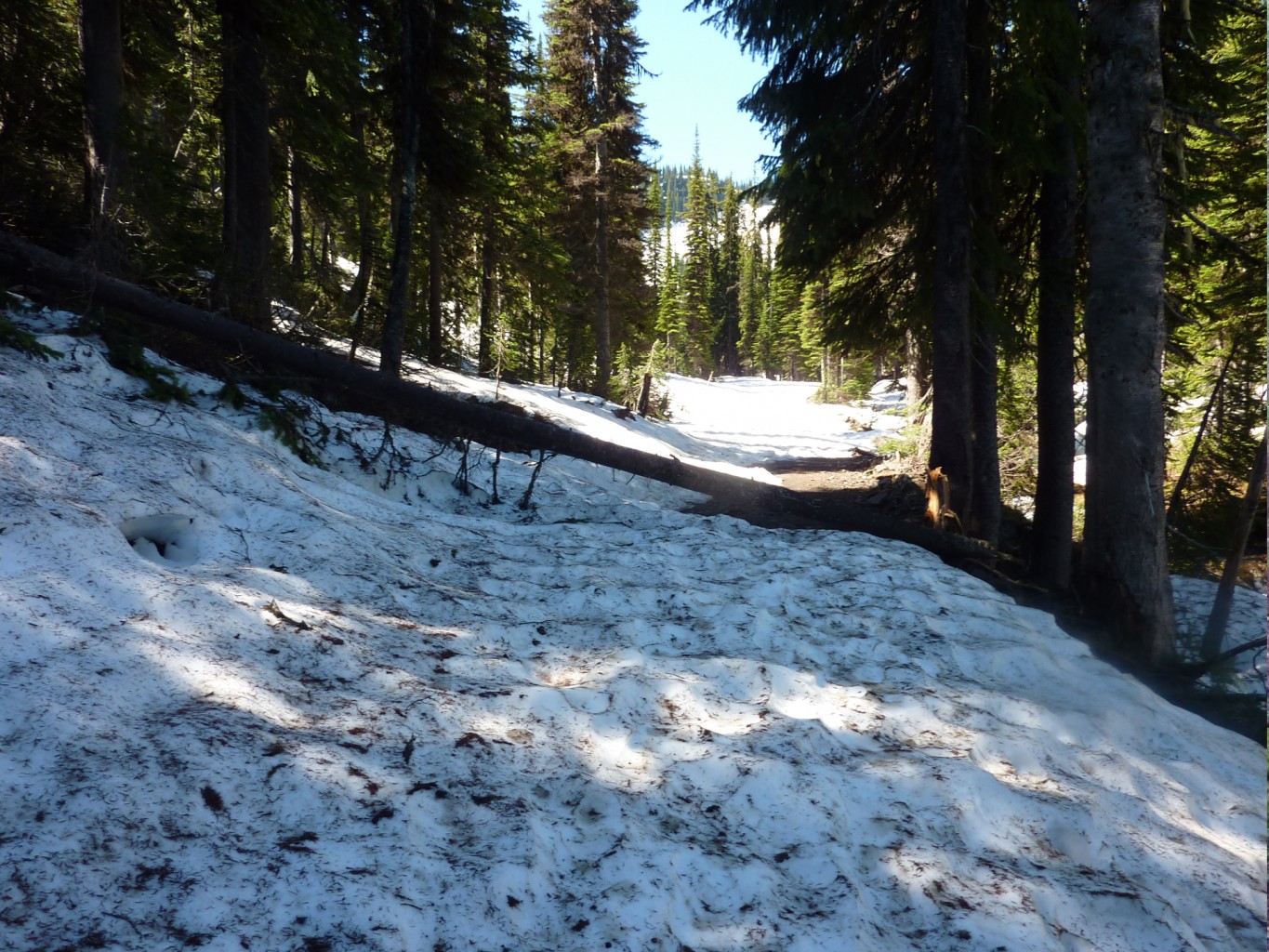 We could make out parts of a campground about a kilometre up from where we parked, but it was still buried under three feet of snow. We continued upward along the road. As we went we could see other bootprints but also ski marks that seemed fairly fresh. 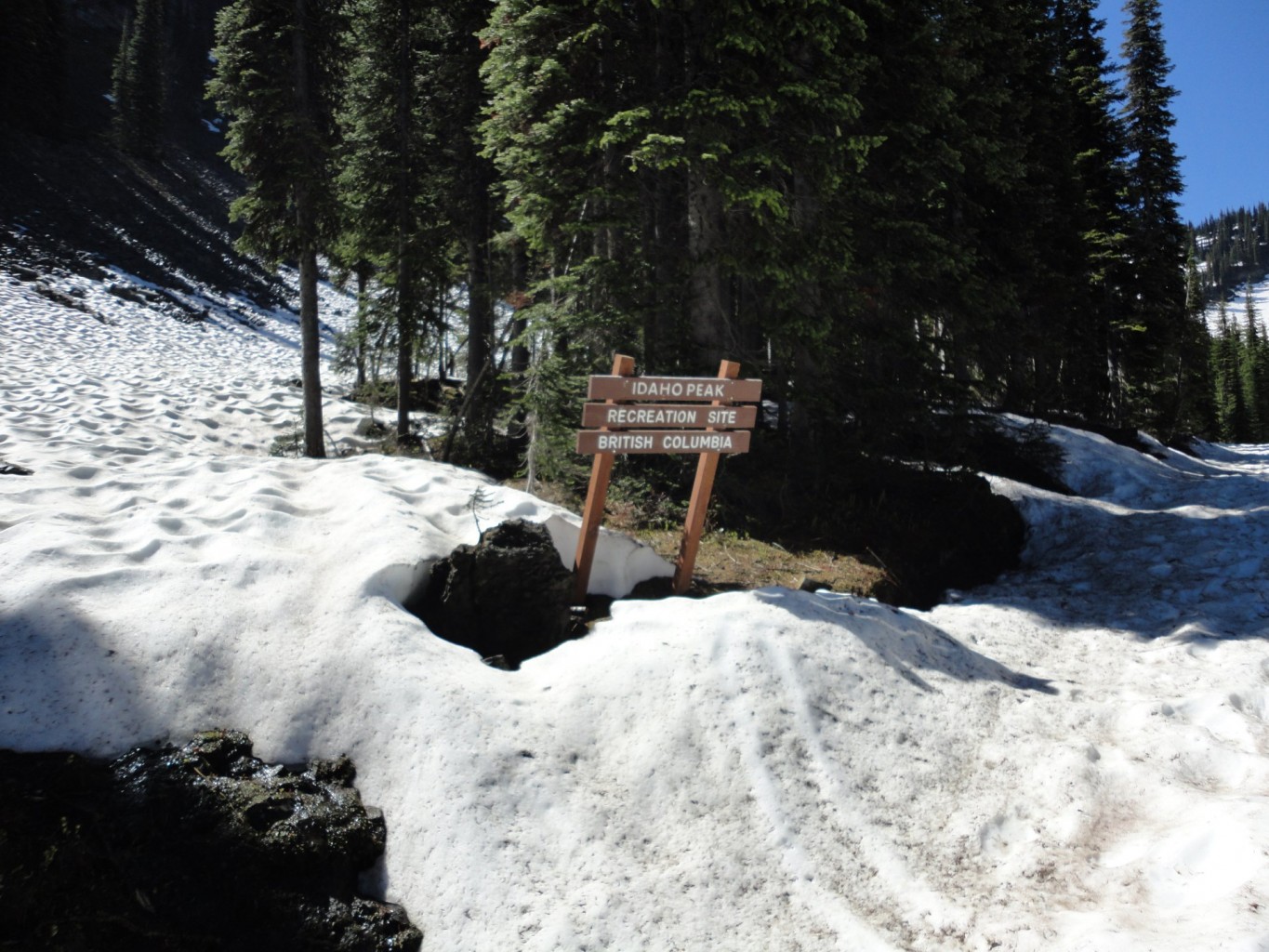 Eventually we made it to the “real” parking lot and stopped for a break. From there it was an easy and less snowy hike of probably a little over a kilometre, along the ridge. Soon we saw the two skiers who were by now heading down. 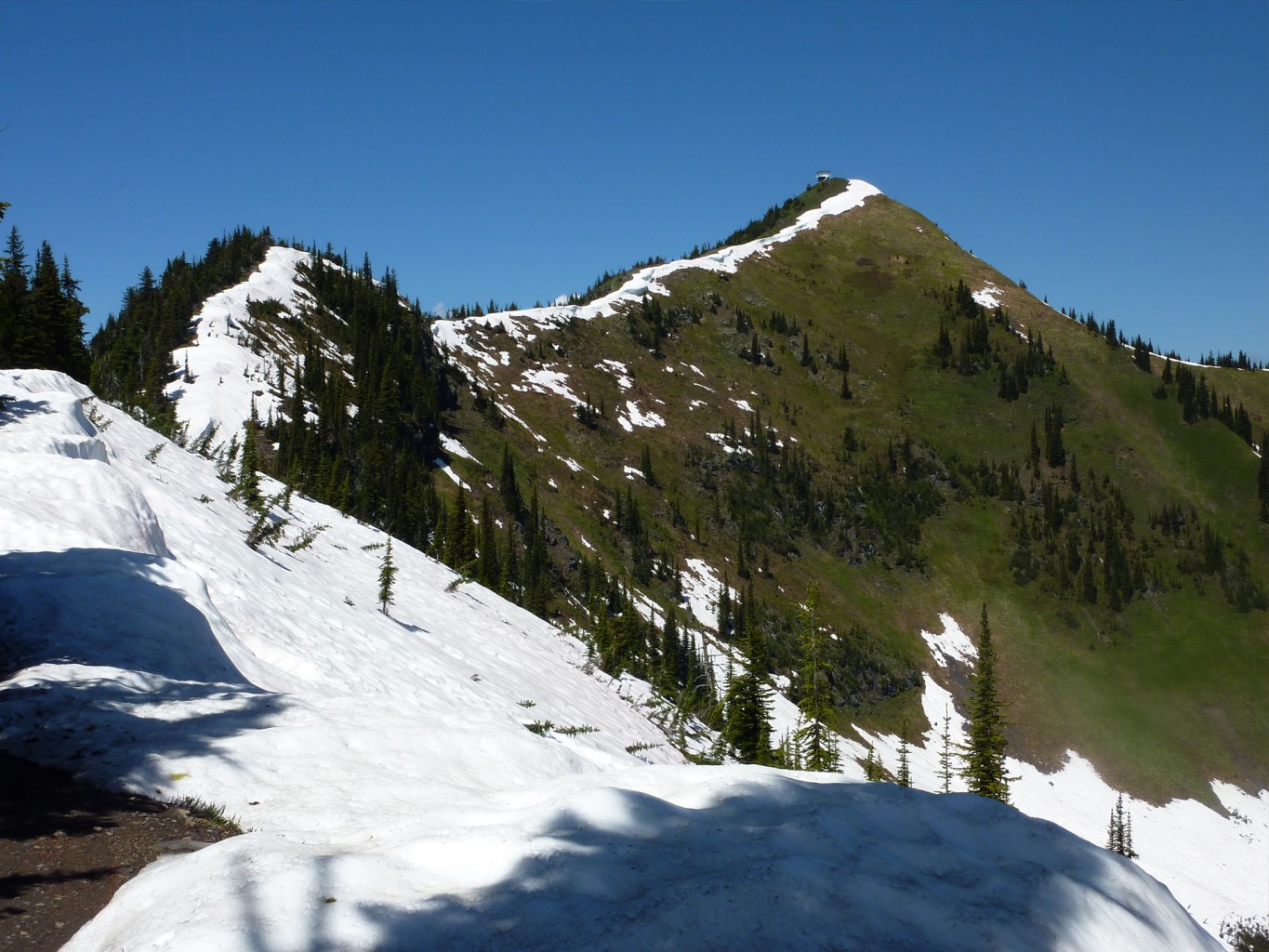 The fire watchtower is on the peak in the distance

The Slocan Valley has a long history of mining, and there are many ghost towns and old mine sites that are interesting to check out in the area. 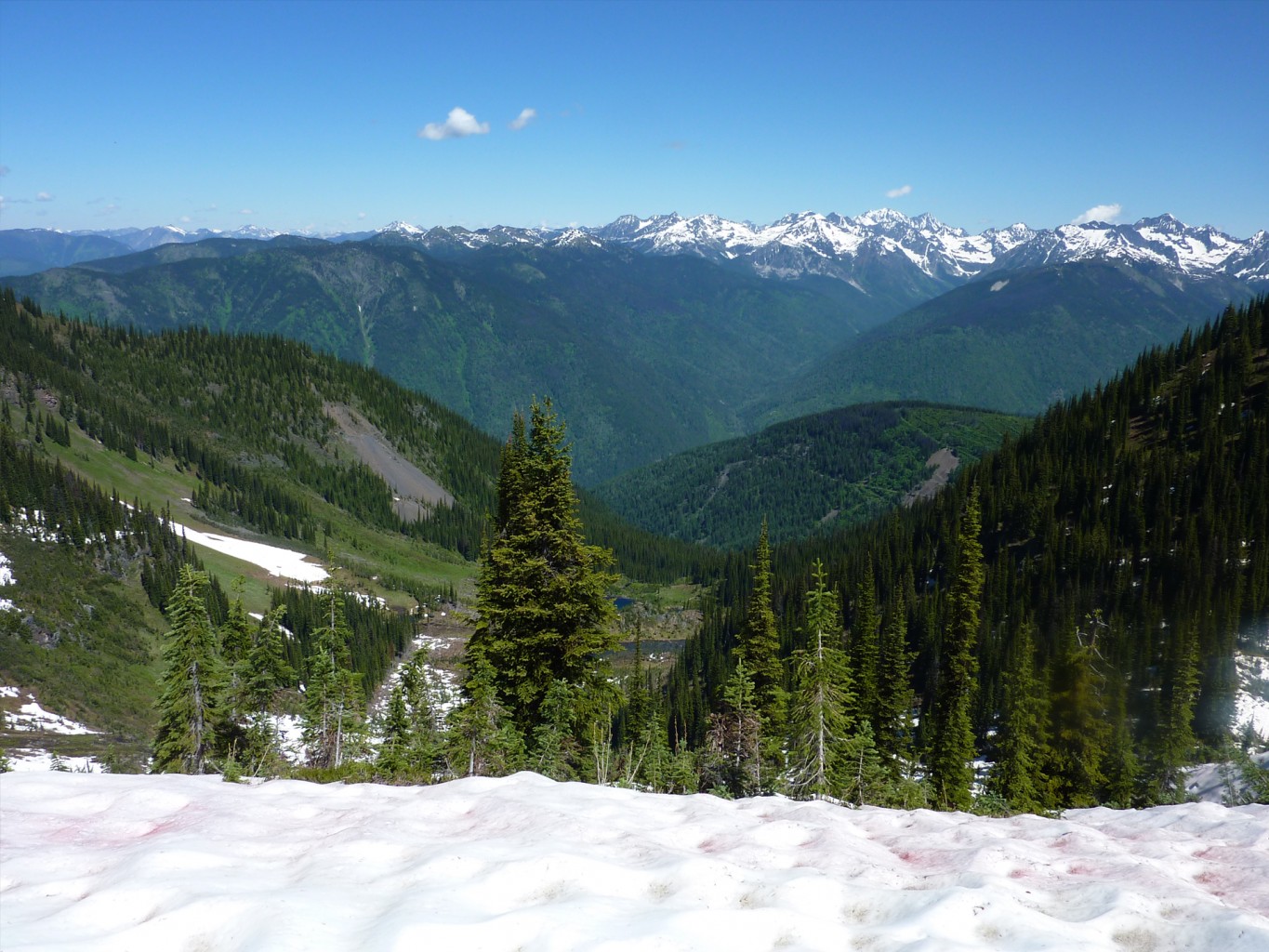 The view from the top is stunning, with glaciers, lakes and mountain peaks as far as the eye can see. This would be a great family hike later in the year, when the parking lot is accessible. 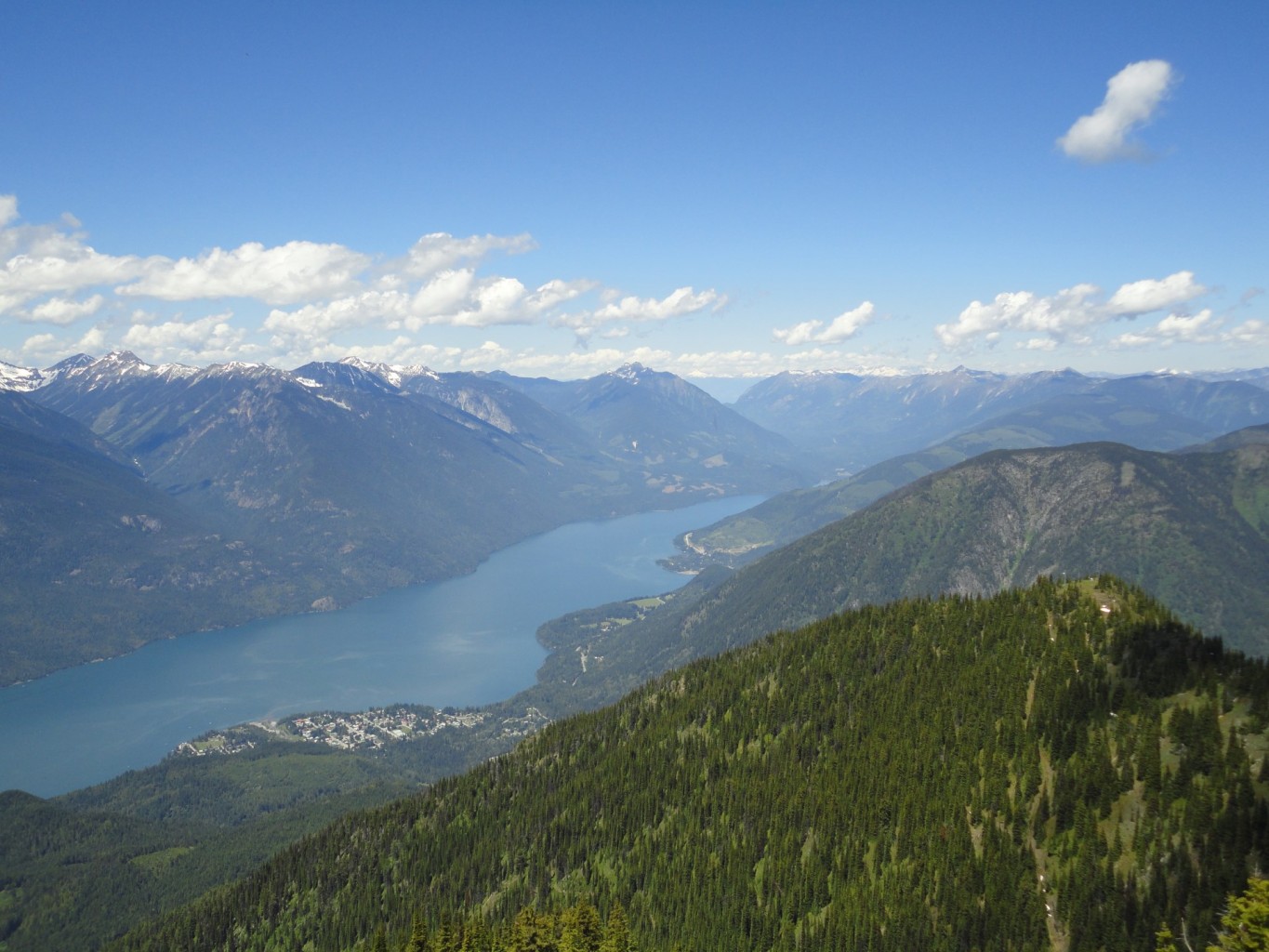 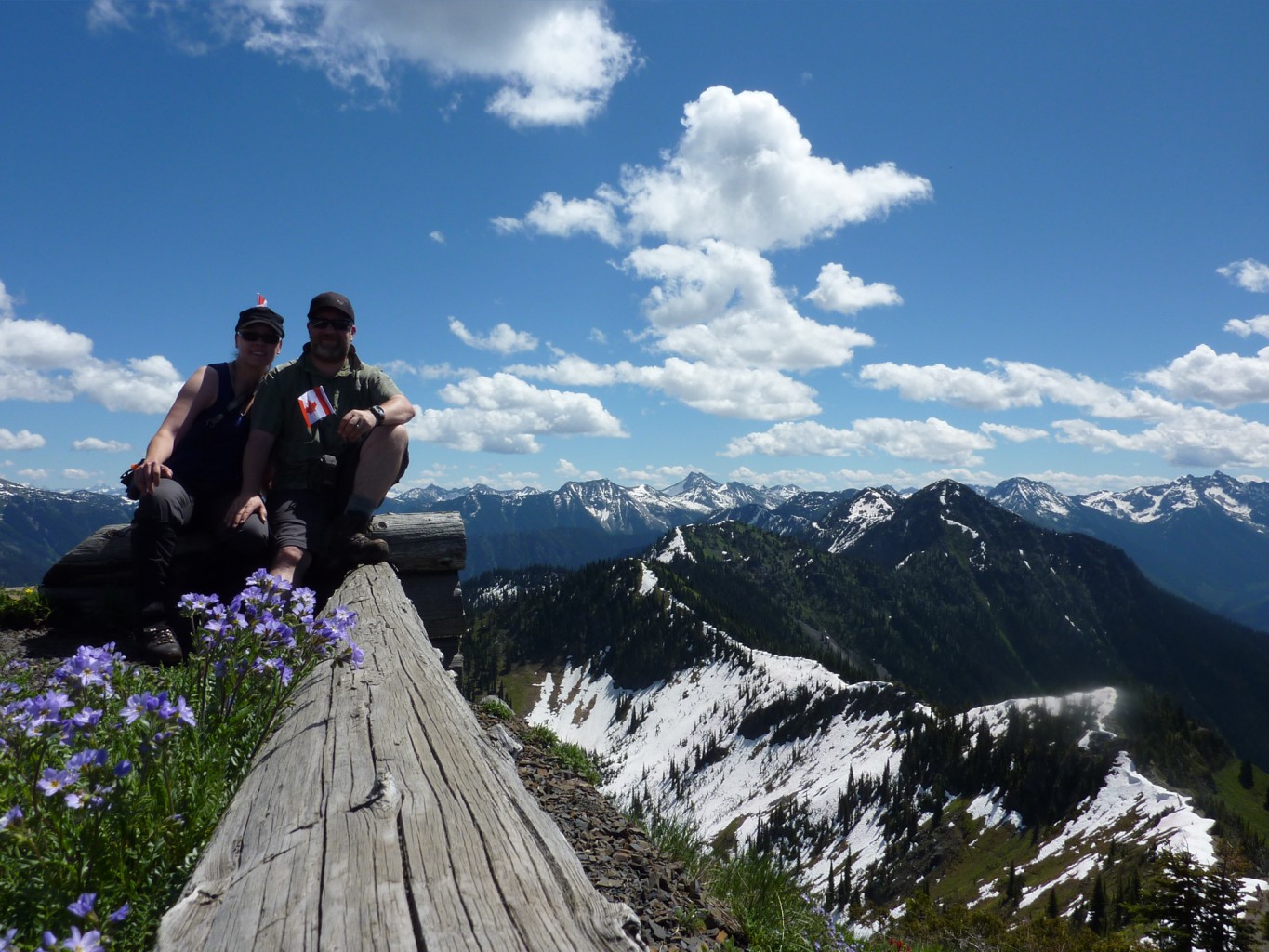 On the way back down we decided to shortcut through the snow instead of following the road. I attempted to “ski” in my boots and soon took a tumble down the hill, ripping my pants and scraping my arm. Arcteryx was kind enough to fix my pants for free. My arm, however, still shows the scars from this adventure (it was worth it).

Latest posts by Raegan (see all)