Not every trip we do is entirely done on foot and some of the best hikes and experiences we have had came about by driving to a new location and starting from there. Cabin Lake, near Mount Stoyama, is one such trip. Raegan had caught wind of this through the geocaching community which noted there are the remains of an old plane scattered on one of the nearby peaks. The plane was a water bomber that went down in heavy fog in the 1950’s on route to assist in firefighting efforts.

We made plans to head out there on a sunny Labour Day long weekend, hoping that its location at the end of a rough road would mean that most people wouldn’t be bothered. I should note; the road is extremely rough. You will need a high clearance 4×4 or ATV to make it along the last 3km. Anything less, and you will pretty well destroy your vehicle. The good news is that not a lot of people come out this way, so it is likely you’ll have the forest service site at the lake to yourself. 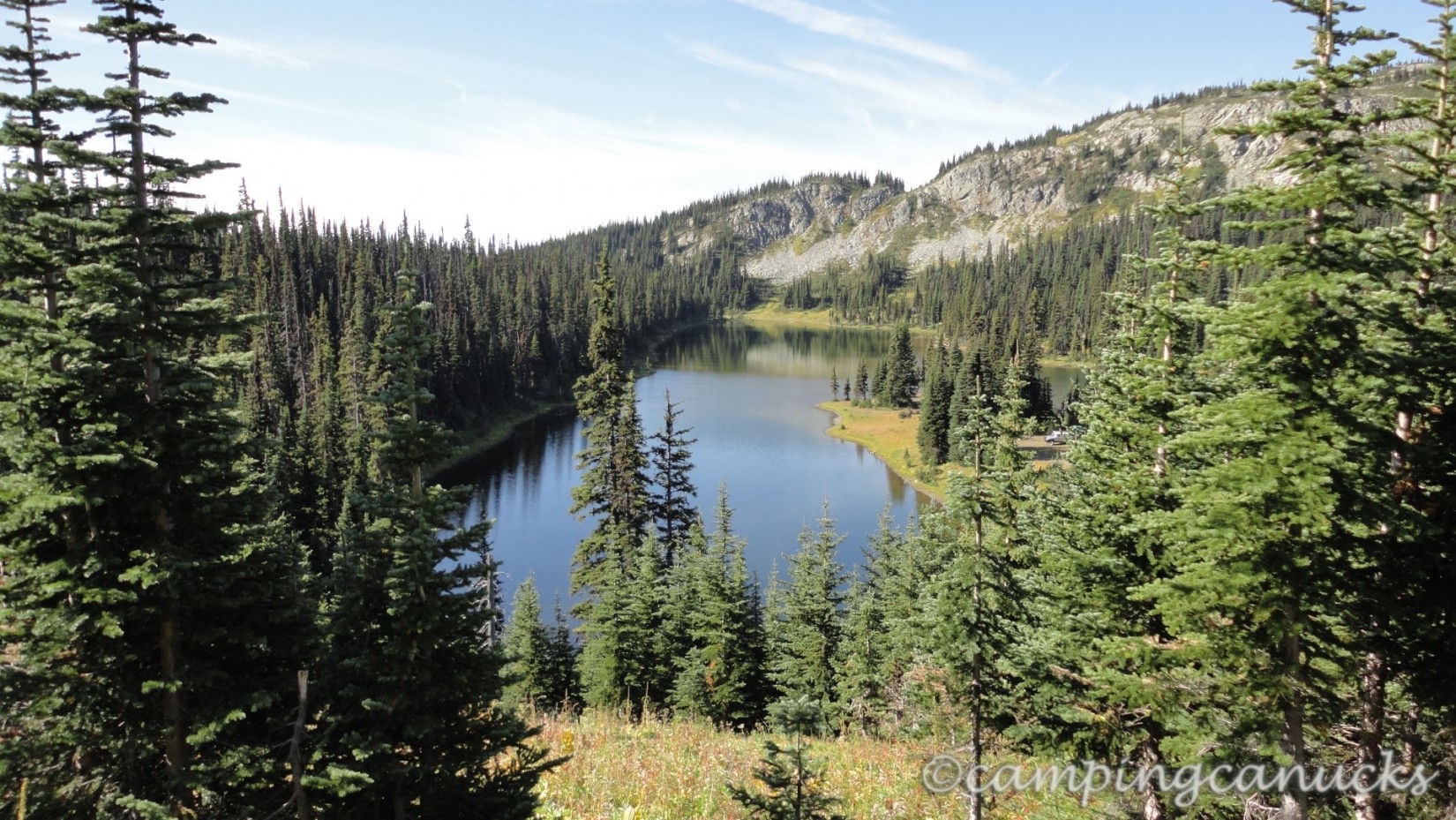 View of the lake from the road above

Cabin Lake has a nice little camp site on its north end with tables and fire pits. Being that we were the only ones there when we arrived, we were able to grab the best spot that was located on a spit of land that projected out into the lake. Later we had company as another person came out for the weekend but he was quiet and we barely noticed he was around. 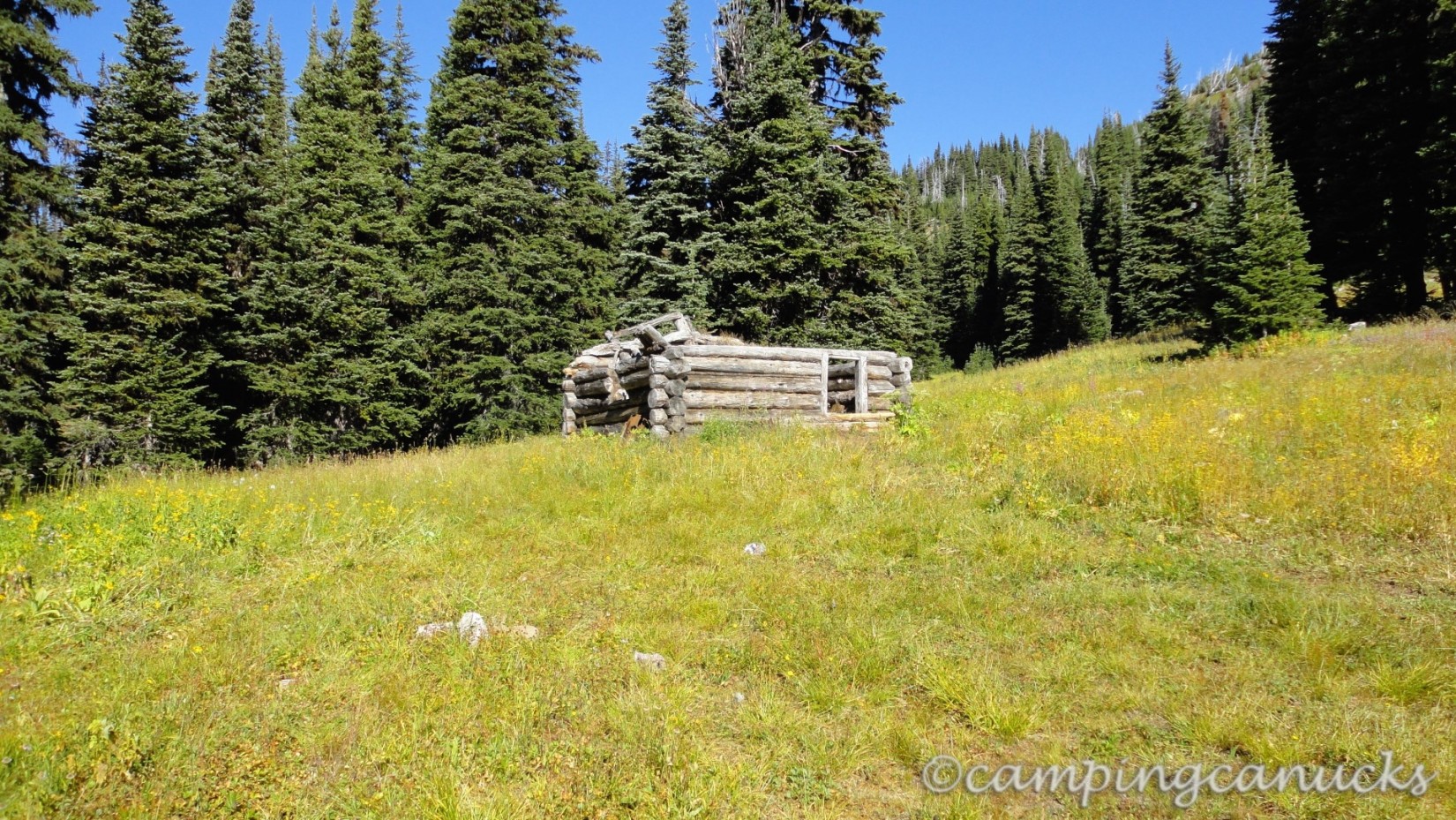 Remains of an old cabin

Being that we drove to the lake, we had also brought along our inflatable boat to do some fishing. After trolling around for the lake for a couple of hours in the evening, though, we came to realize there are no fish to be found in this lake. Due to its high altitude and being that the lake is fairly shallow, I’m guessing any fish that once lived there were winter killed years ago. 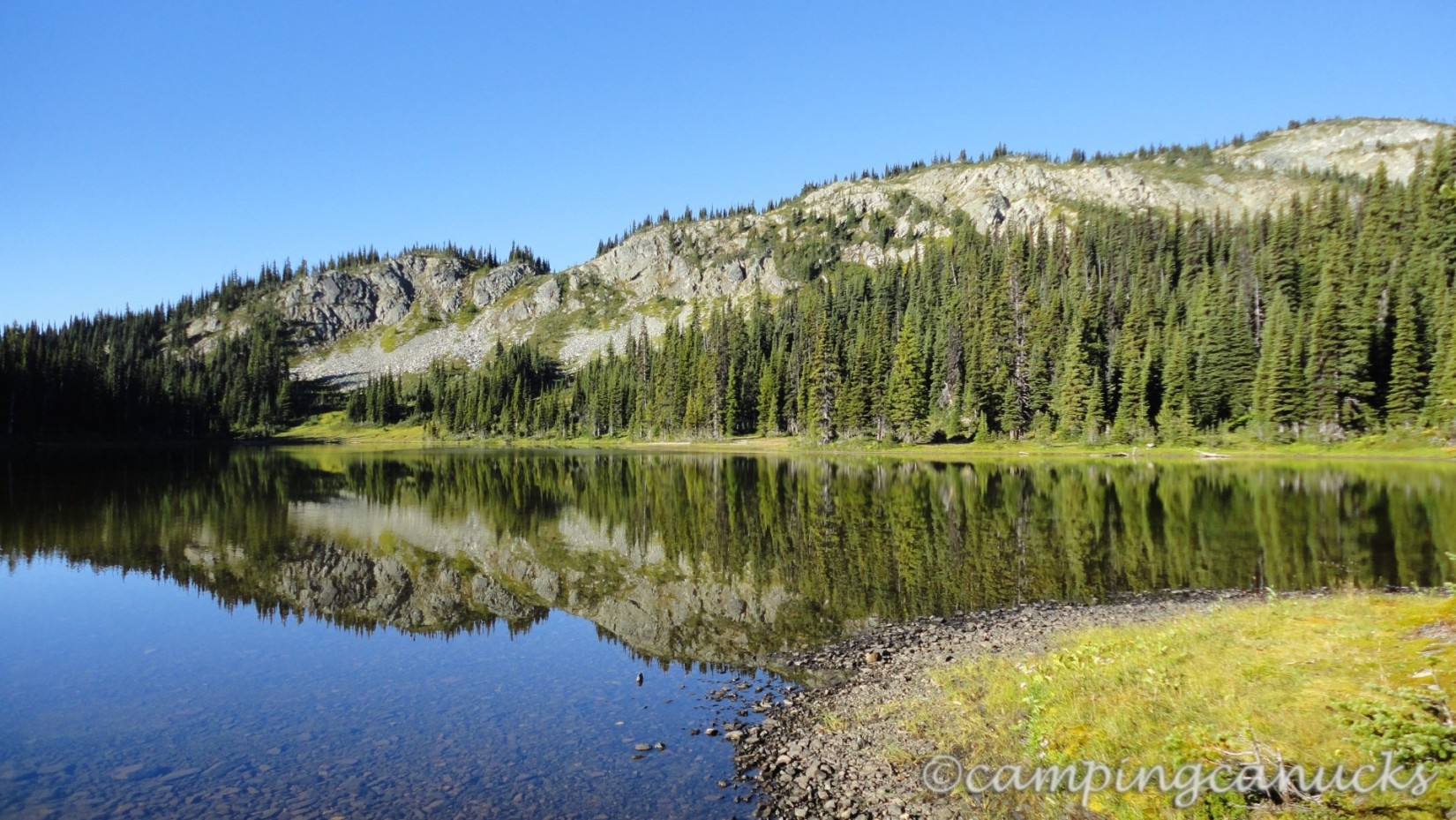 After a cool night with the temperature dipping down to freezing, morning brought us clear blue skies and the promise of some great hiking weather. The hike to the crash site is about 5km and along an easy to find and follow trail that starts at the south end of the lake. Most of the trail weaves in and out of sub-alpine forest with some good views to the south. At some points, we could even see Mount Baker way off in the distance. Eventually we came to an series of alpine  meadows that opened up in front of the slopes where the crash site is. 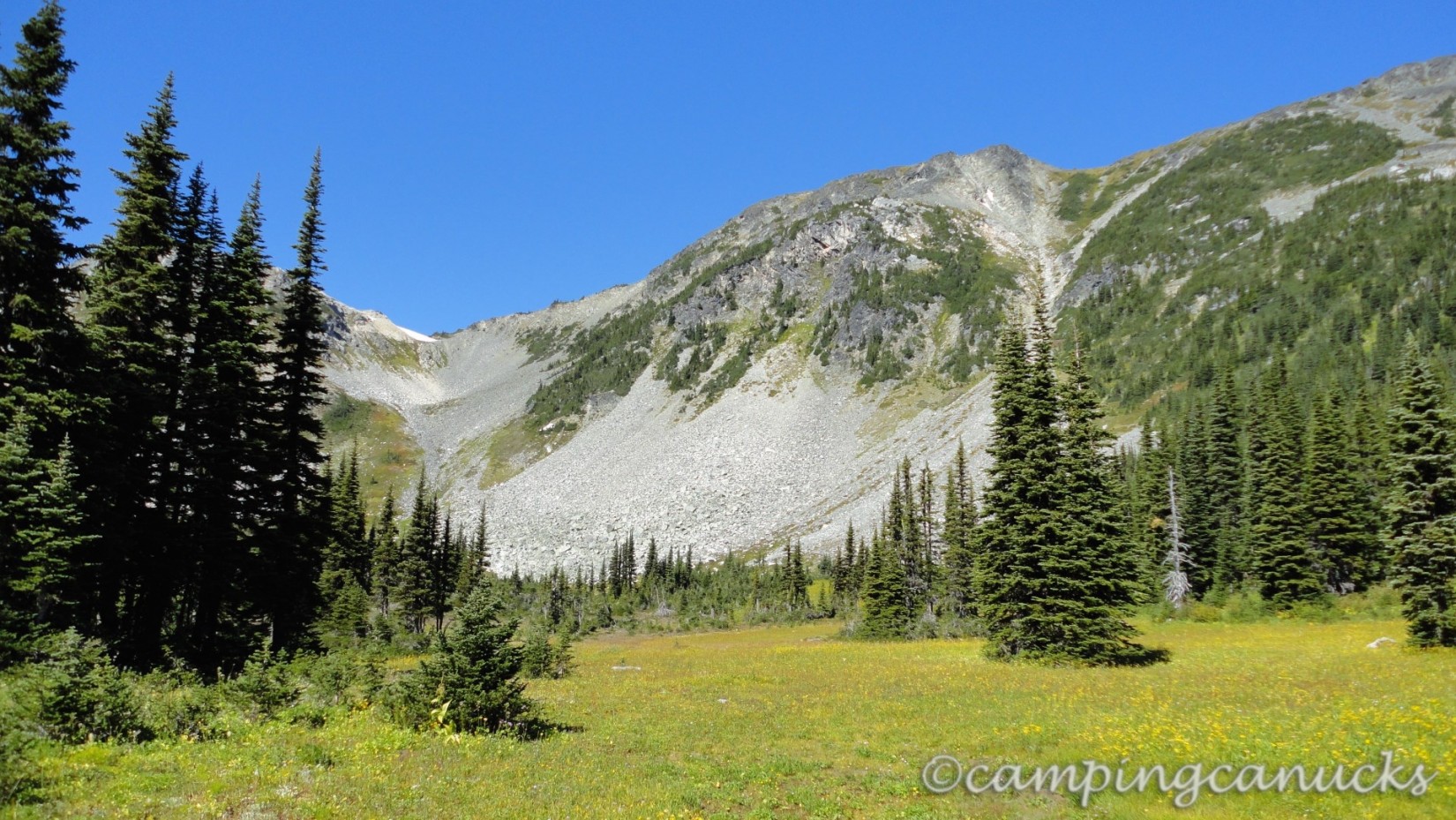 Looking towards to the crash site

Once out of the trees, it became a steep scramble up the boulders and skree on the way to the plane. Littered down the mountain were many parts of the plane including engines and pieces of the wings and fuselage until about half way up the slope, you come to the biggest remains of the wreckage. Unfortunately, over the years, some people have felt they needed to carry cans of spray paint out here and tag the wreckage. 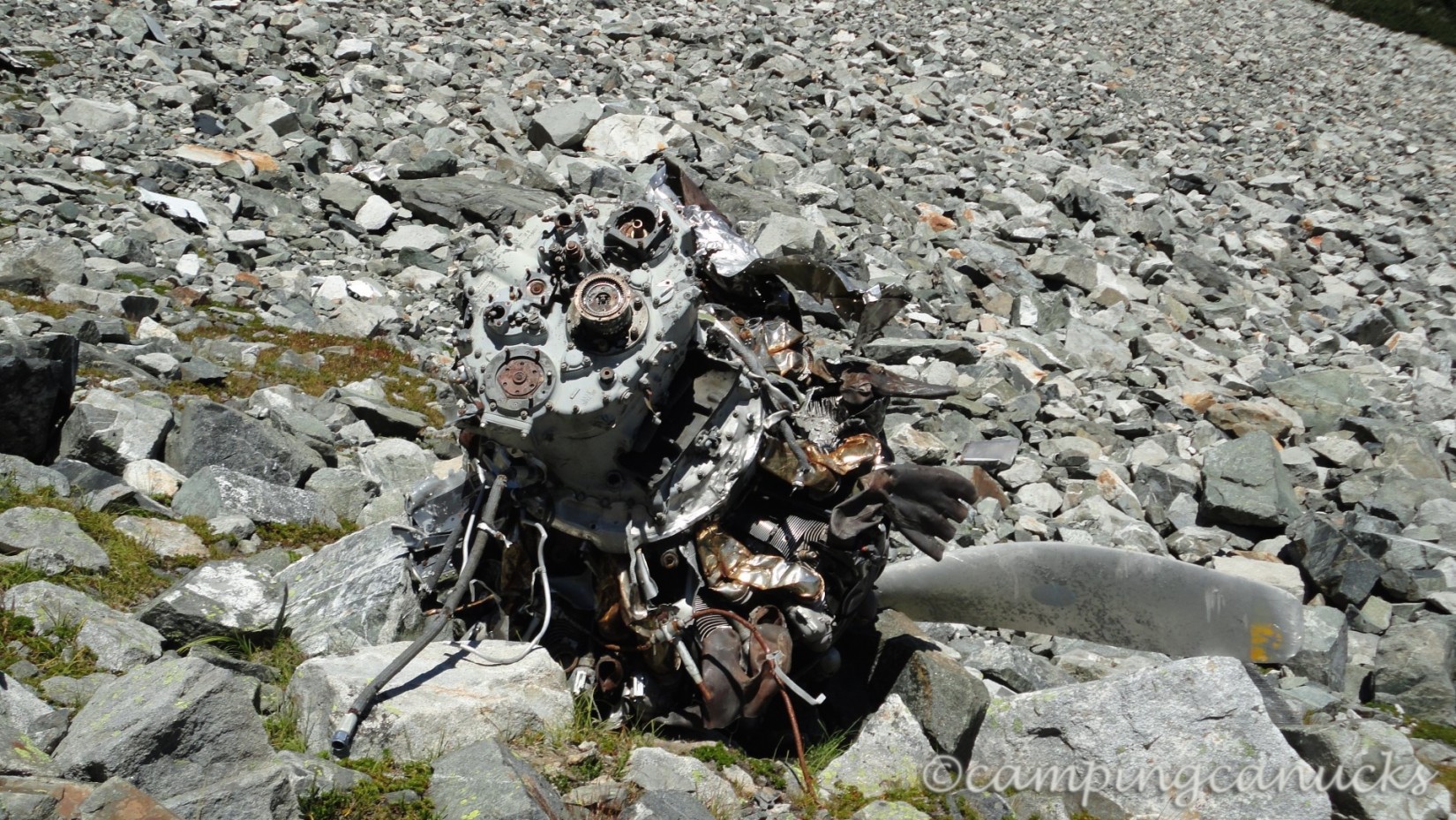 One of the engines 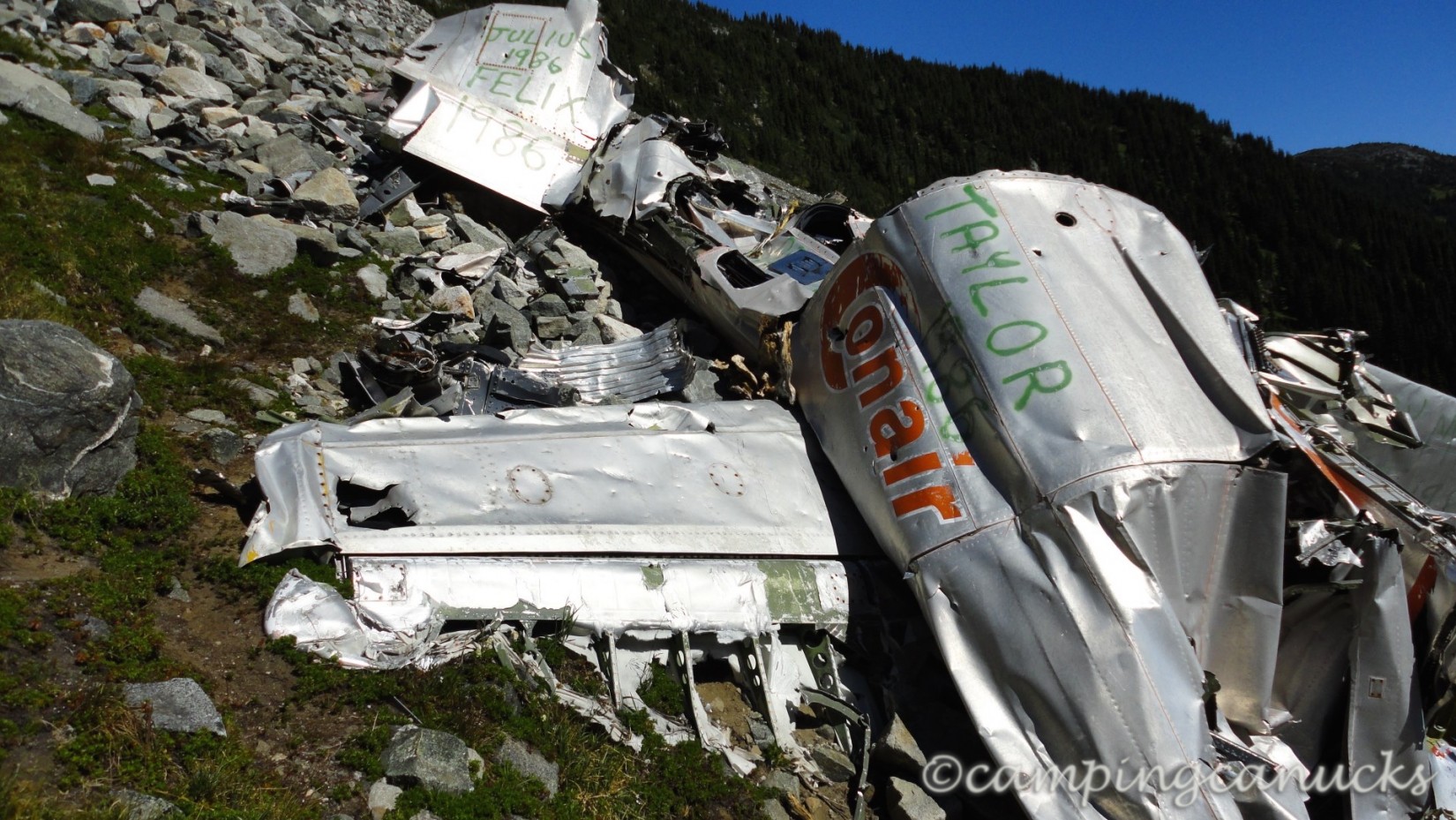 Near what used to the cockpit, a plaque dedicated to the pilot has been attached to the wreckage. I learned that Murray Shewchuk, the author of the book Coquihalla Trips and Trails, was the one who placed it in honour of the pilot. 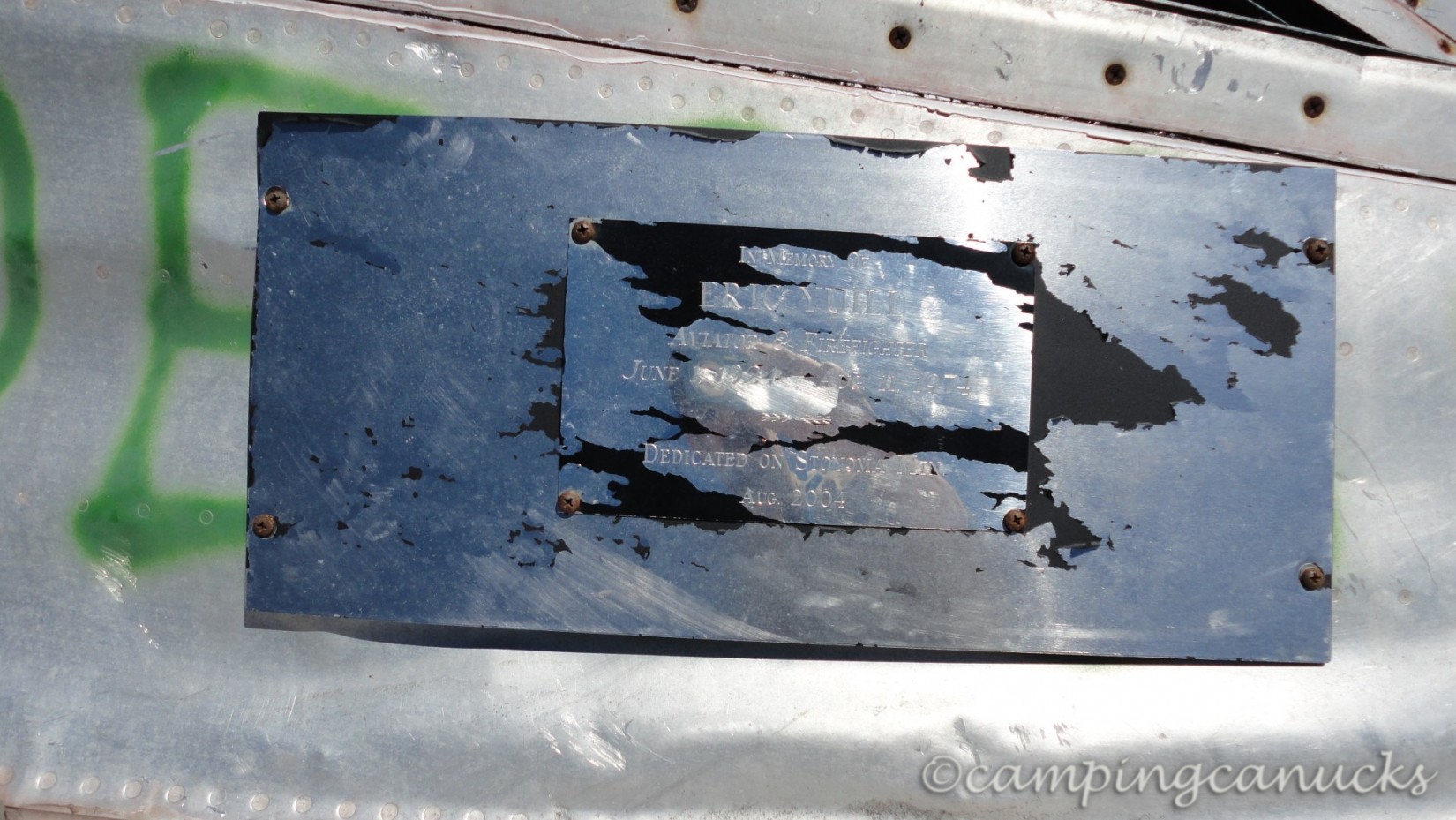 We checked out as much as we could, being sure to be respectful of this location where a man lost his life doing his duty. With it still being early in the day, we decided to keep going up the slope to the peaks above for a view of the area. 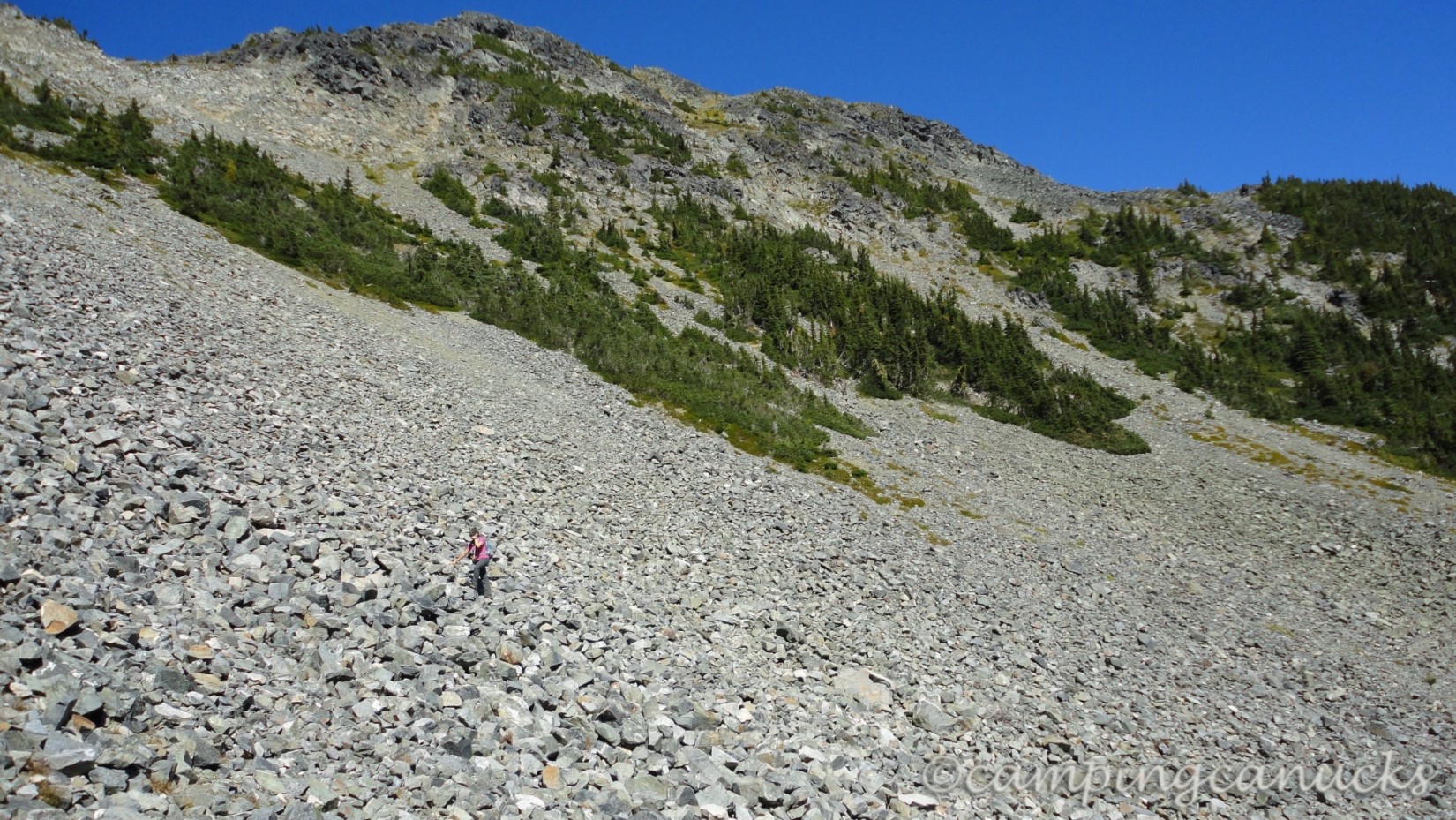 Raegan making her way across the slope

Once at the top, we stopped for a bit of lunch break and just enjoyed the views in the nice September sun. This time of year often lends itself to relatively smoke and smog free days so we could see the Coast Mountains to the west and the mountains of Manning Park and the Cascades to the south. We also found a trail at the top which we followed for a bit. We later learned that this was a section of the Heather Trail, one of the few trails in the area that runs from lake to lake and follows a number of the ridges along the way. I would like to get back here another day and spend more time exploring some of the other trails. And get to the top of Mount Stoyama. 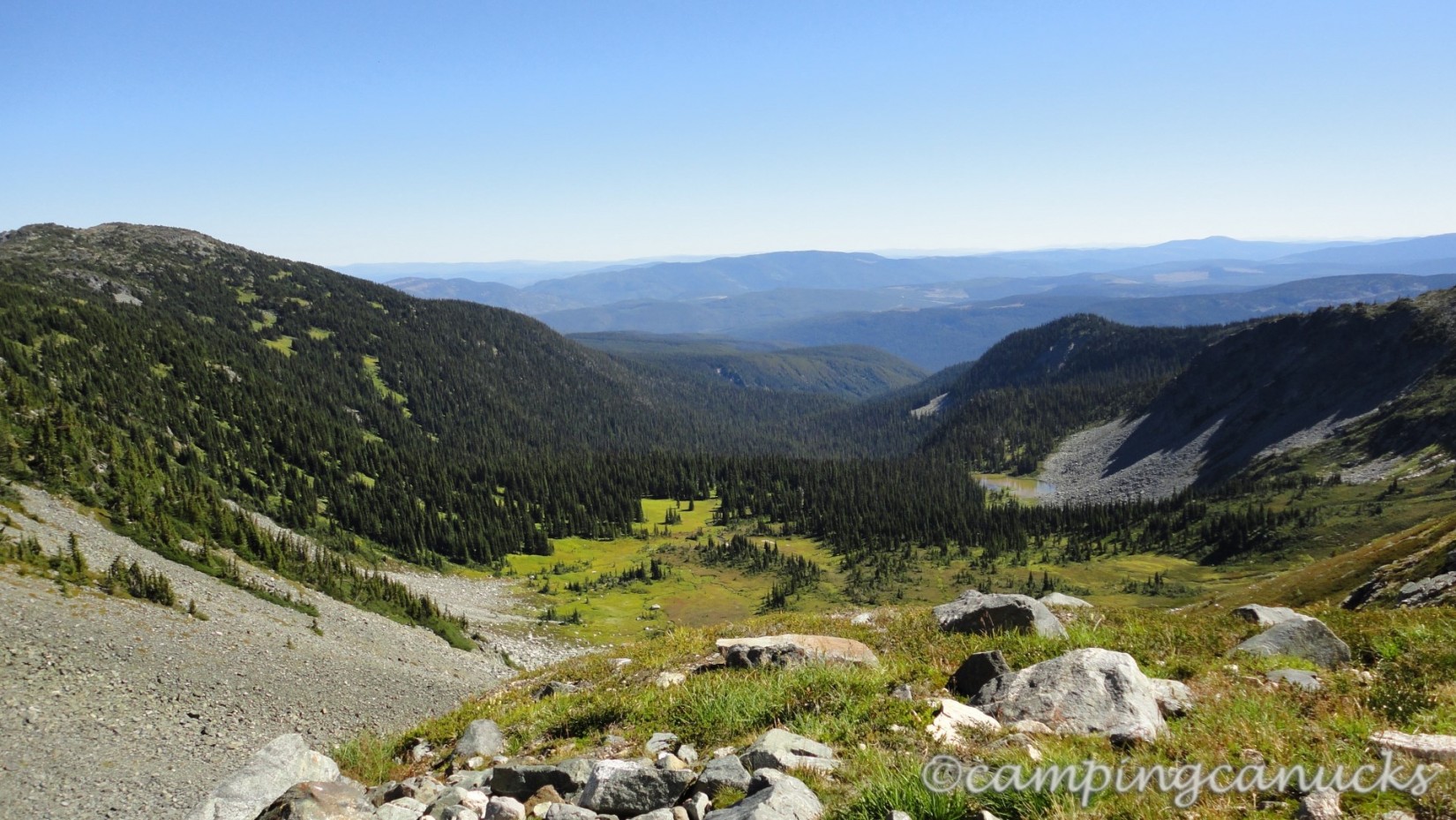 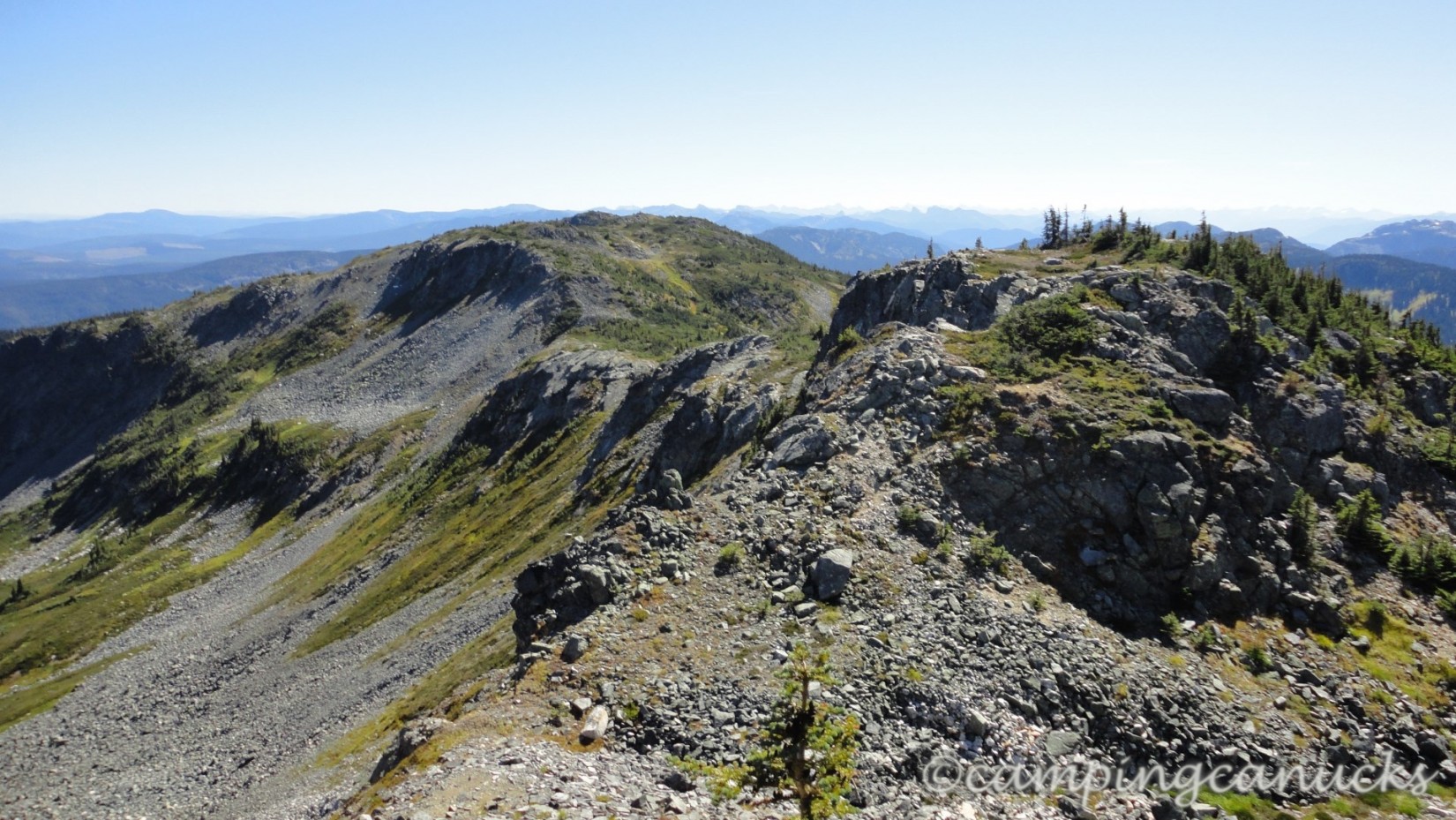 The trail we were on lead to the top of the nearest peaks so we made our way up until we found a well defined path that lead back down into the valley and onwards back to our camp site. All told, the hike worked out to just under 13km. It was a quick trip down and within a couple of hours, we were back and ready to motor around the lake for a while more. The rest of the day was just spent hanging out and relaxing and just enjoying a wonderful September weekend. Come morning, we just packed up and made our way back home. Along the road out, though, we did meet a group on the way in. Getting our vehicles past each other was a bit of a challenge as the road is quite narrow. I was pulled over at a very severe angle to let their truck get by.

For anyone who has the means of getting out to Cabin Lake for a few days, I would definitely recommend it. There’s plenty to see and with the hikes and sights around the area, it is worth the trip. And early September seems to be a pretty good time to do it if you catch the right weather.