As has happened on quite a few of our trips over the years, our first attempt to get to Eagle Pass Mountain between Revelstoke and Sicamous did not succeed. We had made our first trip one late October day a couple of years ago where we found that the road that leads to the trail head was completely iced over and that we were not able to drive up the road to the start of the trail. That said, we decided that day to just walk the five kilometers to the start of the trail and hopefully get to the top even with the additional distance. Unfortunately, hours later, we were still a long ways from the top of the peak and had to turn around. We resolved to come back another time.

On our second time up, we were joined by Anthony and by Teresa, who runs the blog Teresa the Traveler, for a day trip up on Eagle Pass Mountain. Despite a sunny weather forecast for the day in the region, we unfortunately found ourselves heading to the trail in heavy fog and cloud. Regardless, we figured we would make the best of it and make it to the top on this day. 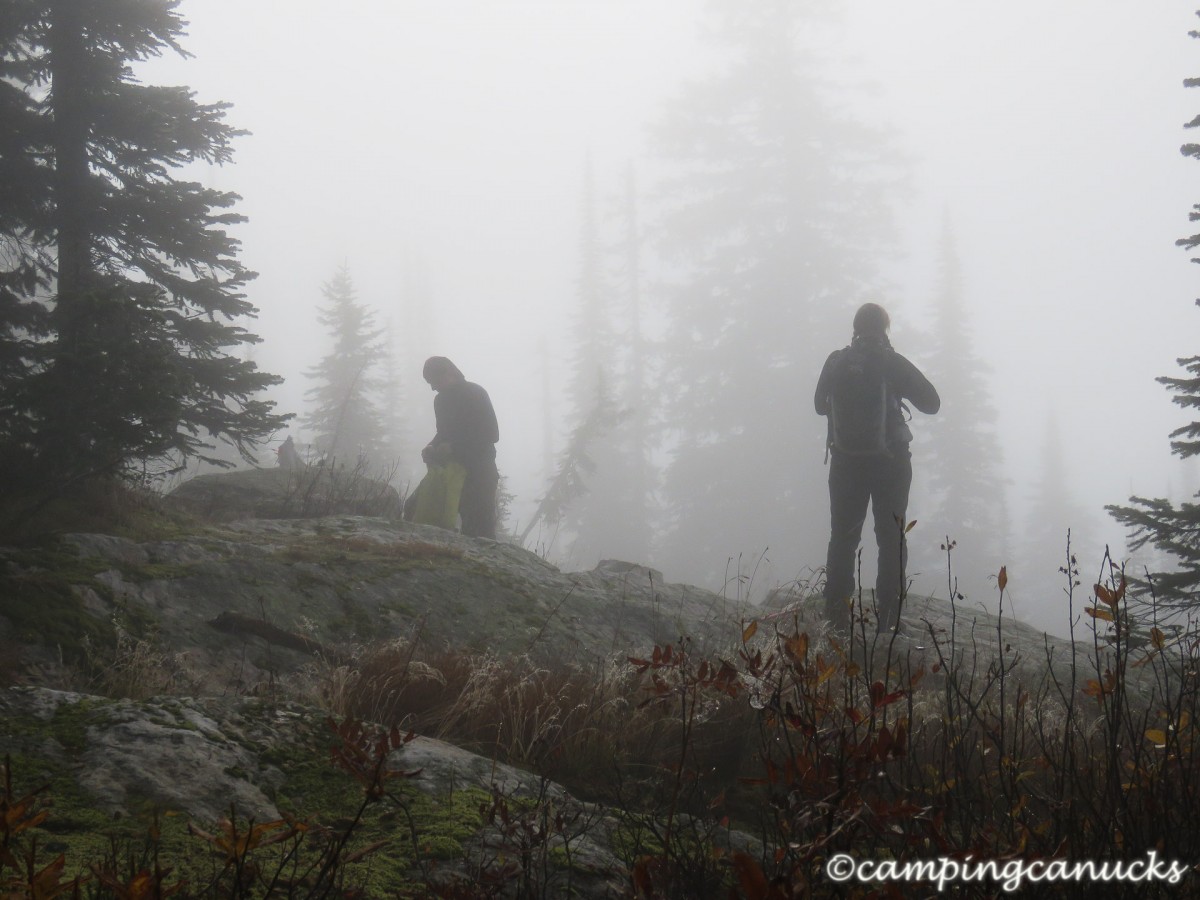 A foggy start to the hike

For much of the first few kilometers, we just walked along through the forest and the fog, unable to really see very much or very far. However, we did notice that as we gained in elevation the fog was beginning to thin out as we started to get above the trees. 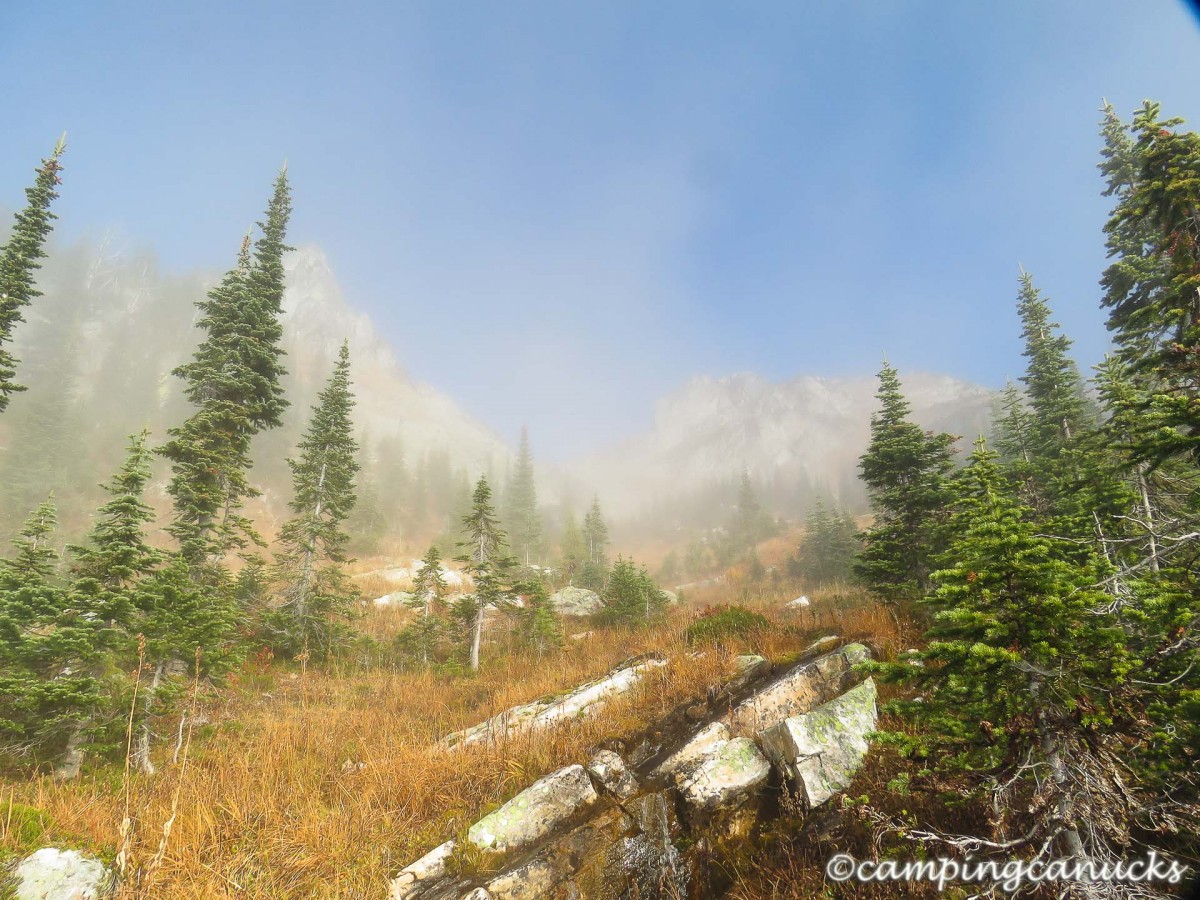 Fog thinning near the treeline

It was a pleasant surprise to find that shortly afterwards, we found ourselves above the valley cloud with unrestricted visibility as far as the eye could see. With our moods raised and the sun shining down on us on, we continued on our way up the trail. 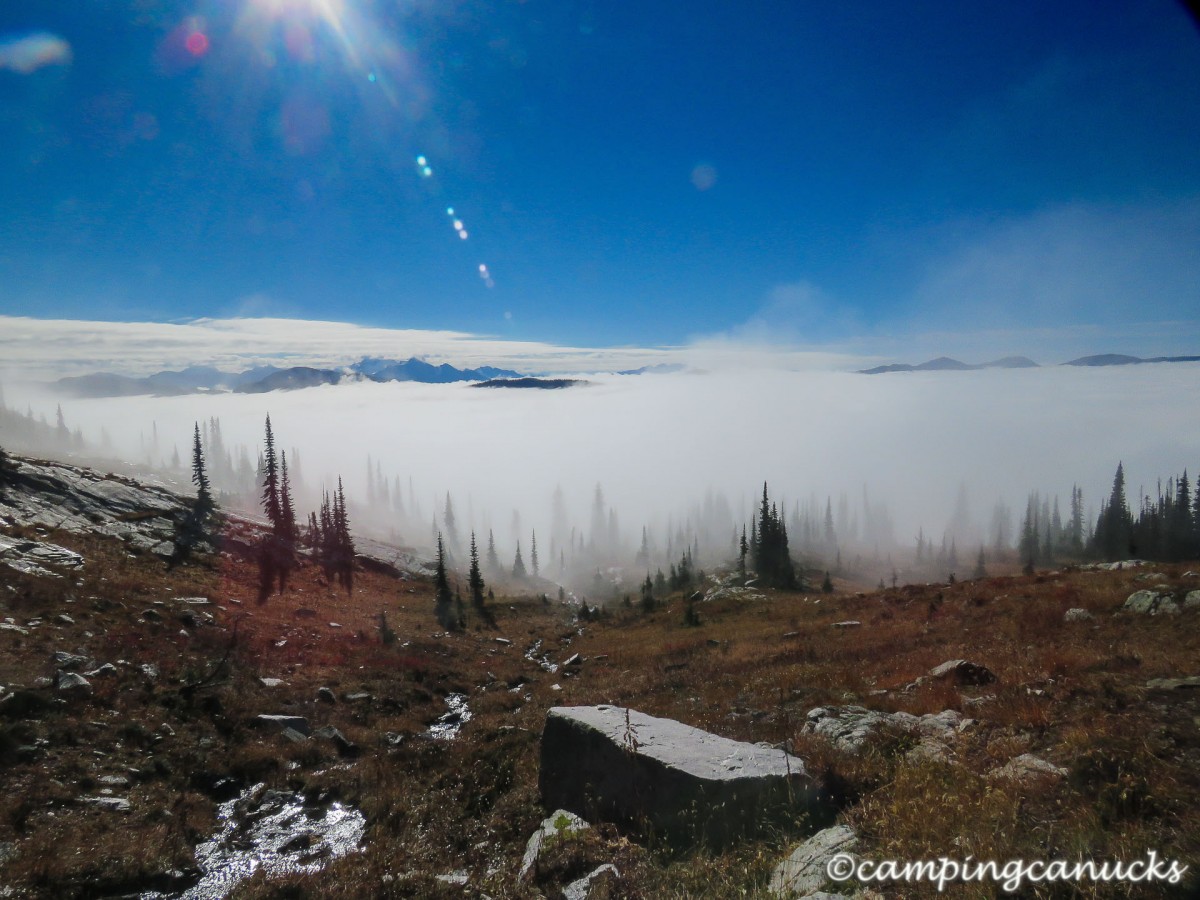 A sea of cloud under the morning sun

At this point, the trail was mostly above the treeline and continued to switchback its way up the southern and eastern side of the peak. Here and there, we passed by large rock formations and cliffs that fell deep into the valleys below. Stunning views were to be found in practically every direction and we found we were pausing often to appreciate the fine vista that this day provided. 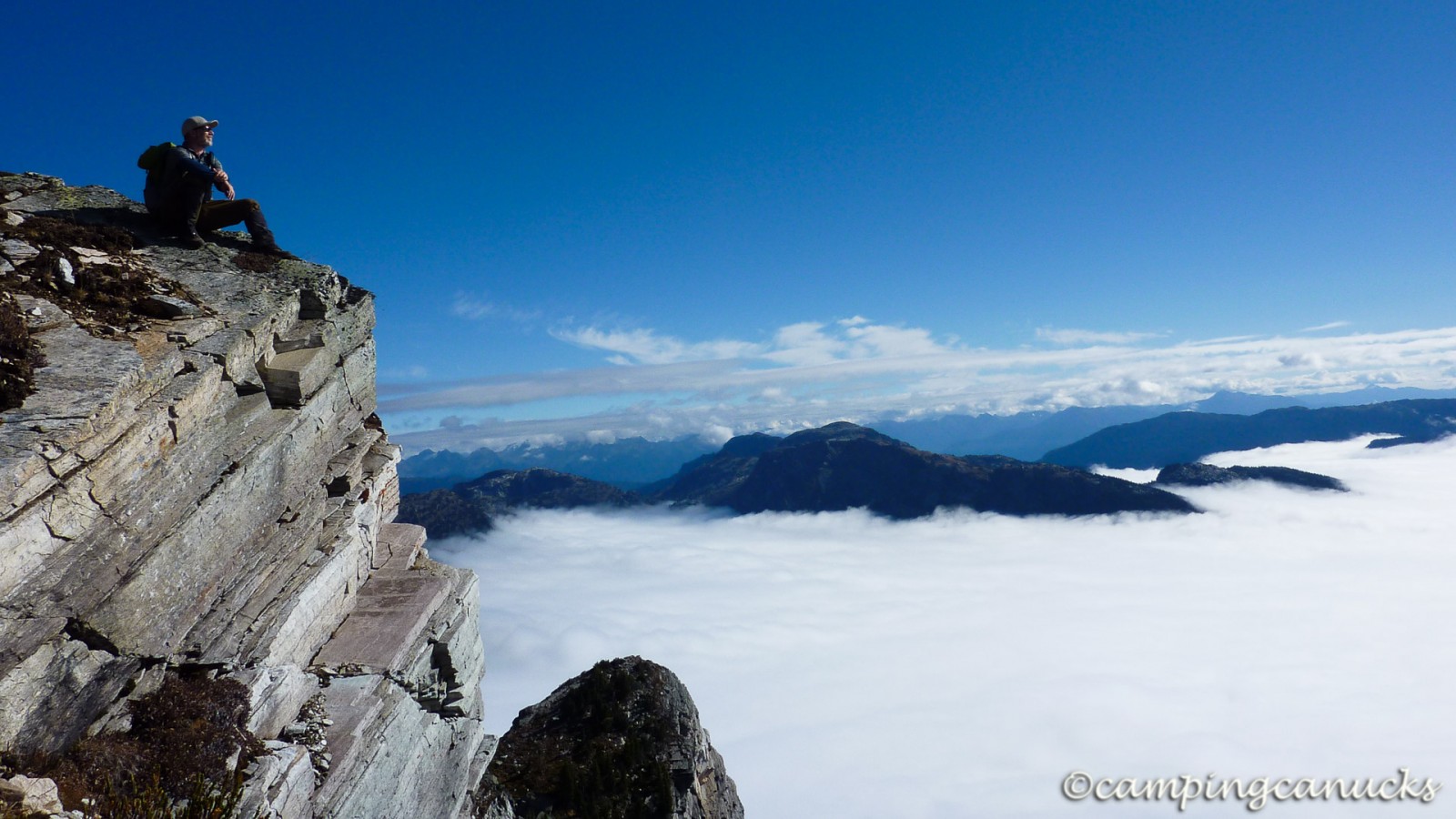 A nice place to enjoy the view

Overall, there is quite a noticeable elevation gain along the trail, but it’s fairly easy going for the most part. It’s at the base of the peak, where there is one last steep pitch to the top, that it can be a bit sketchy. Luckily it was dry for us that day, so footing was good and there were no slick surfaces to worry about. With a bit of snow and/or ice, or mud after some wet weather, it would probably be a harder ascent to the top of the peak with uncertain footing.

View to the north on the way up

At the top is the stone foundation of a very old fire watchtower. Most of the wood is long gone but there are still quite a few pieces of timber to be found on and around the tower. Unfortunately, there was also a lot of broken glass, so on Teresa’s suggestion, we cleaned up what we could carry to hopefully make the area a little safer for the next hikers. 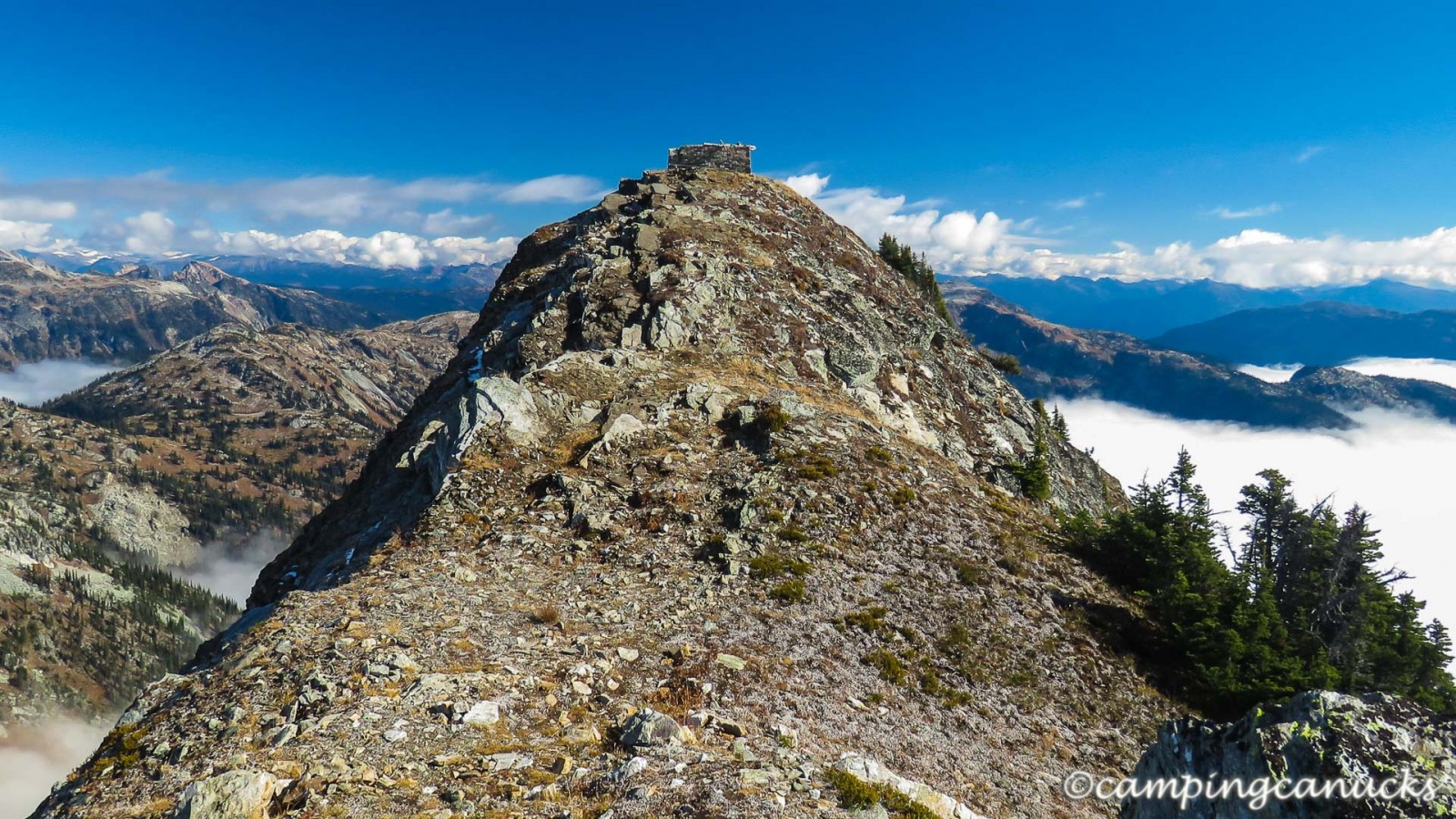 Watchtower on the top of the peak

This was a wonderful place to sit down, have lunch, and just enjoy the view while basking under the sun on a fine Autumn day. It’s not uncommon to have strong winds on peaks but we were lucky enough to have none at all and it made it all the better for us to enjoy our time at the top. 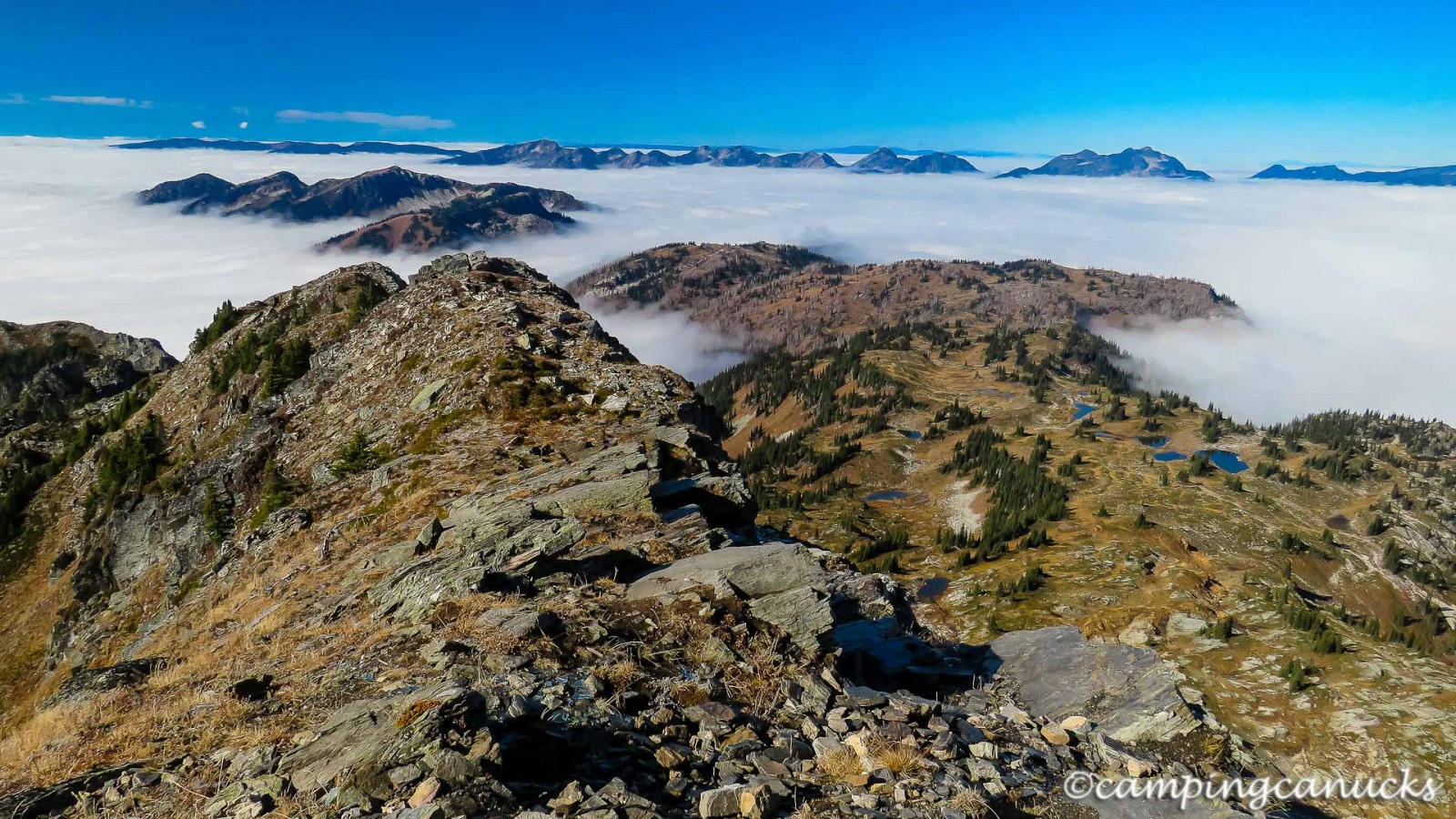 View south of the peak

The fog below ebbed and flowed like the waters on an ocean. Sometimes we could see the many lakes below and sometimes they were swallowed up by the clouds.

Once we were ready to move out again, we headed southwest along the ridge to see if we could find another way down, rather than go back down the way we came up. We walked as far as we could until we determined that there was no real safe alternative way down. Maybe earlier in the season one could scramble down on the west side of the peak, but we found there were traces of snow and ice, being that this was getting late into the season, and decided it wasn’t worth the risk and headed back down the way we came.

We’re happy to say that this hike lived up to our expectations. It’s not a very long hike and does have a pretty substantial elevation gain but for anyone who gets the luck of the weather and makes it to the top, they will be well rewarded with some of the finest views in the area.