Having grown up in Golden, BC, it’s quite surprising that I had never done the short hike to Gorman Lake in the mountains west of the town. The hike is almost considered a rite of passage for locals who are into the outdoors. Being that’s it’s a relatively short hike, coming in at around 8 kilometers or so for a round trip around the lake and back, I decided to head up that way to check out this most popular of Golden’s hikes. Two locals ladies who have been up there a number of times were kind enough to take me with them and so we all piled into my truck and away we went on a wet and cloudy September day.

Getting to the trailhead is pretty straightforward although there are some fairly rough sections of road here and there. Any higher clearance vehicle should be able to make to the parking area without the use of 4×4. The nice thing about the drive up as well, is that it gains a lot of elevation and you start the hike at 1800 meters. Being that the lake is at 2100 meters or so, there’s not a lot of elevation gain on the hike up to the lake.

The trail starts in the trees but it doesn’t take too long before you reach the sub-alpine and begin to get some great views of the nearby peaks. 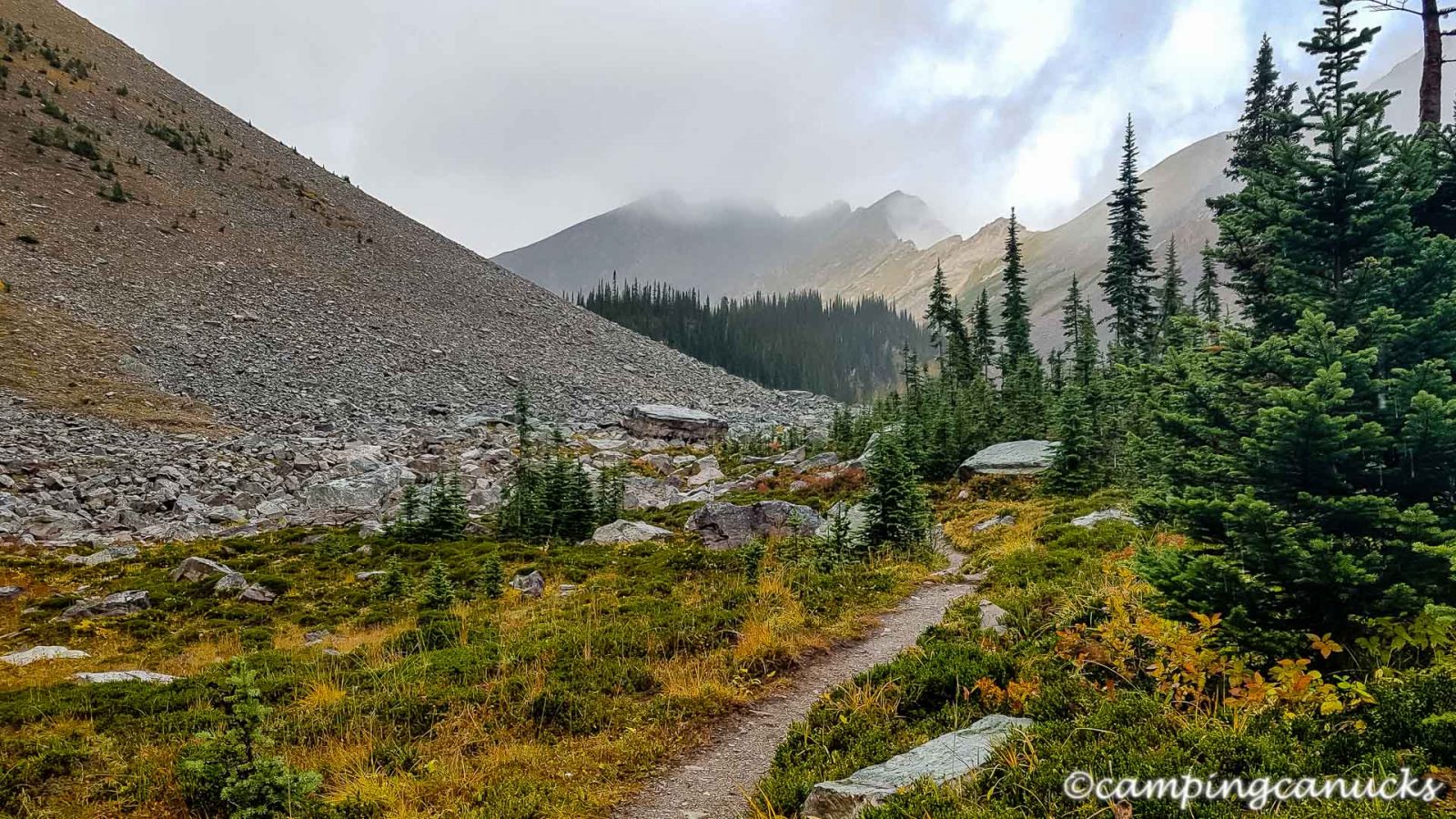 Unfortunately for us on this day, it was quite cloudy and we only occasionally got breaks in which we could see the peaks. That said, it didn’t rain much for the trip in but that was to change later in the day. 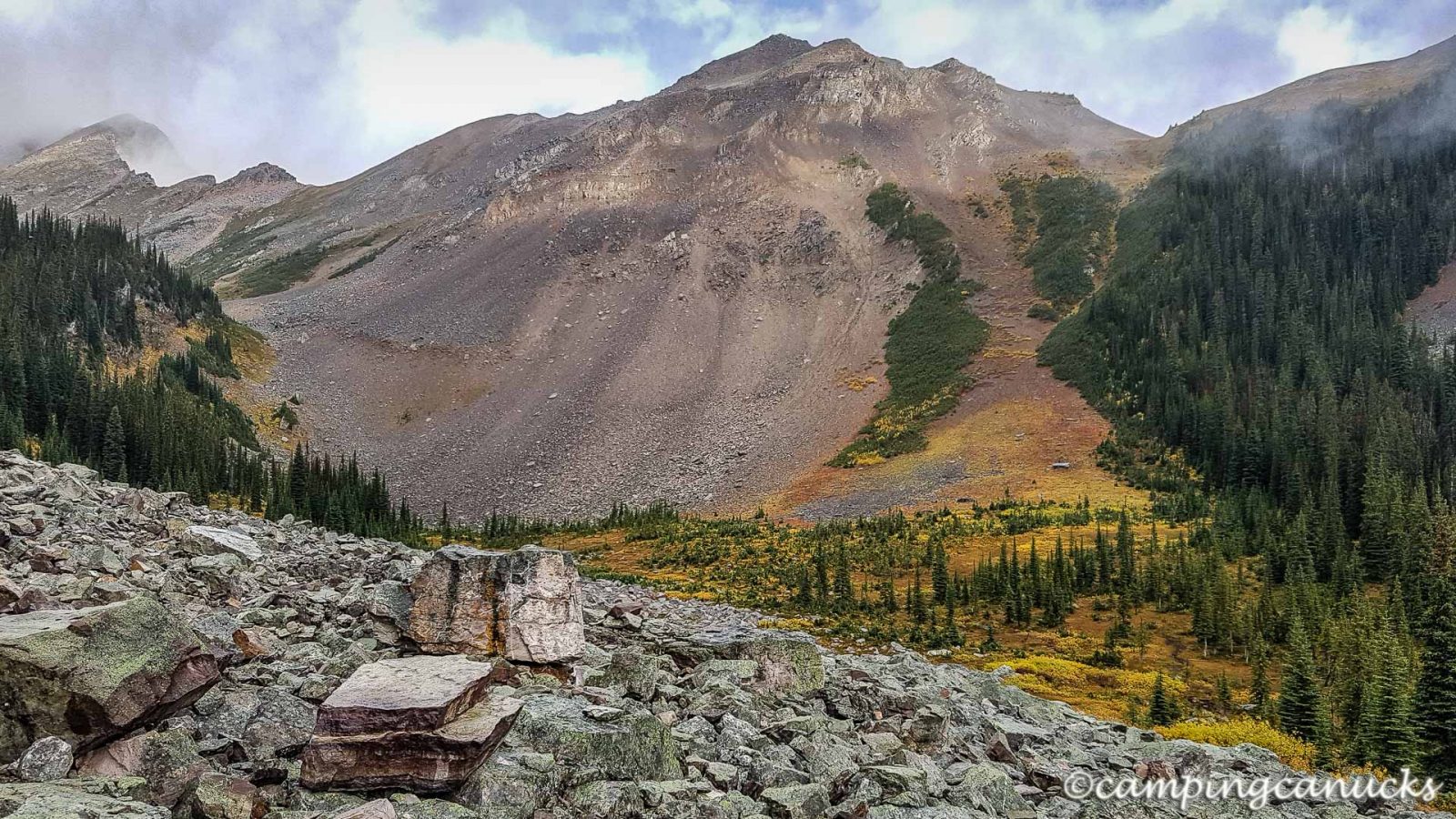 Colours of autumn in the meadows

It’s only a bit over three kilometers to the lake so for many people, it’s less than an hour to hike in. The lake itself is nestled in a small bowl surrounded by a number of peaks and ridges although we were limited on what we could see due to low clouds on this trip.

There is in fact a rustic campsite with a couple of tables, tent pads, and a toilet, so the option to camp at the lake is there. Surprisingly, we even came across a canoe with life jackets and paddles placed on the lake shore for anyone who is inclined to paddle around the lake. That would be hard to resist on a nice sunny day but on this day, we were not inclined to take the canoe onto the lake. 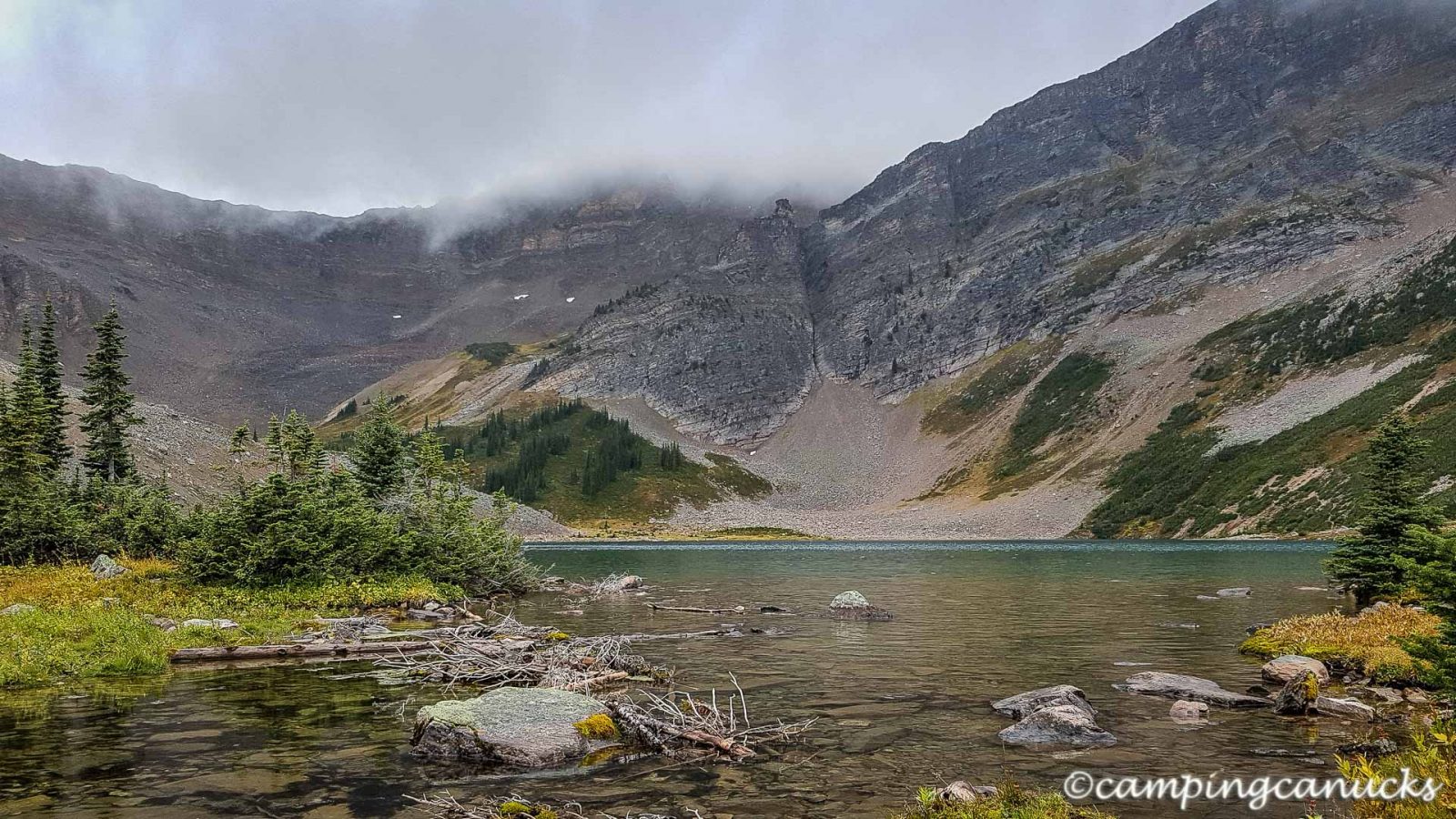 Gorman Lake from the east bank

There is an easy to find trail in good condition that does a loop around the lake and I suspect that is what most people do as part of this hike. However, I decided to scramble up to a ridge to the north of the lake in order to get some views looking down on the lake as well as some of the nearby peaks if possible.

Finding a way to scramble up to the north ridge takes a bit of route finding but there is clear evidence here and there that others have done it before. There’s no trail per se, but footprints and tracks up the slope can be spotted by a sharp eye. It’s also obvious that this is a popular sledding location due to the garbage and snowmobile parts that can be found scattered around the area. I understand that sledders crash and pieces of their machines are lost in the snow but it’s kind of sad that those of us in the summer months have to see the amount of trash being left behind by them. 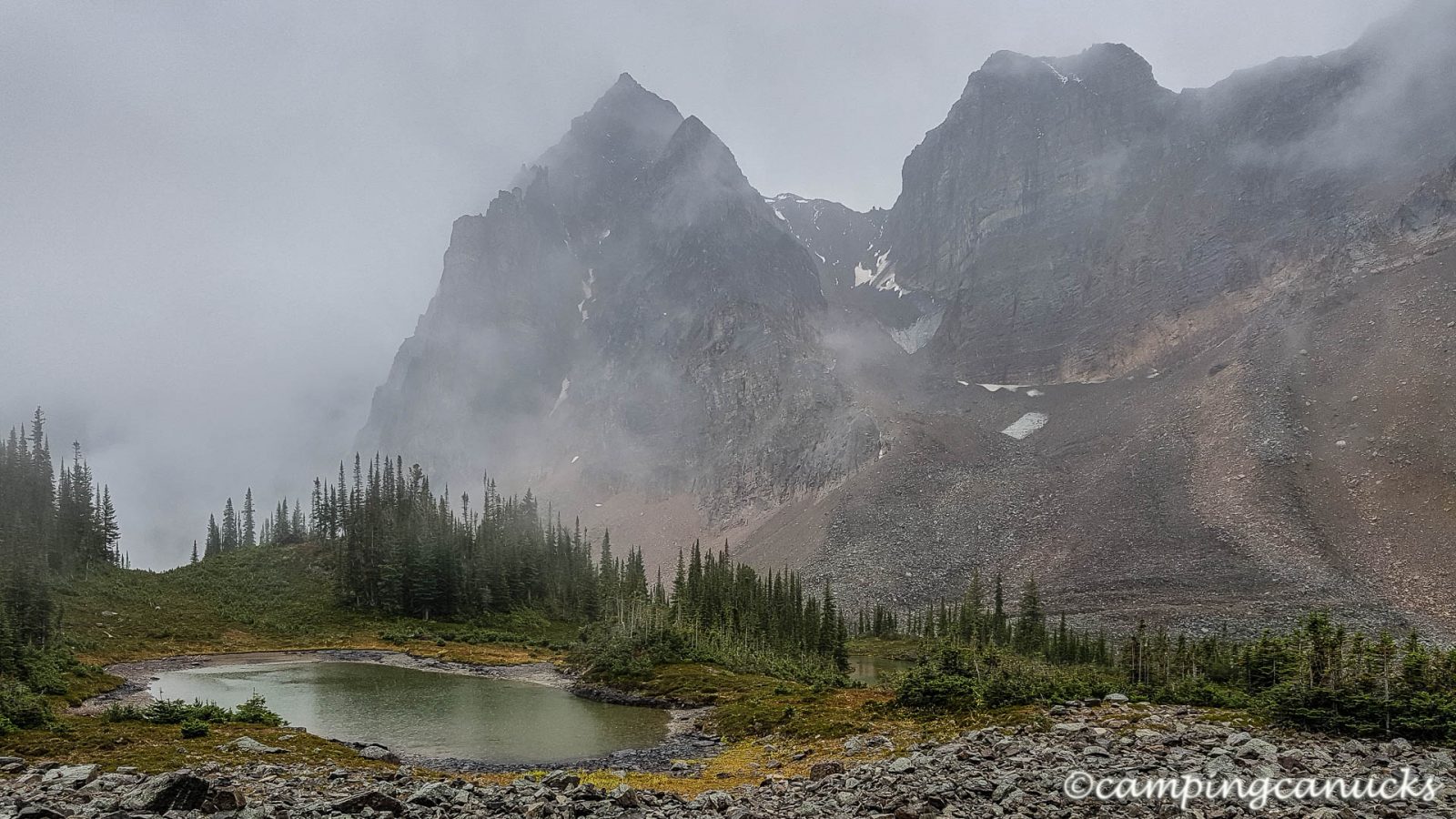 A pond above the lake

It was less than a kilometer before I reached the ridge and was able to see some of the surrounding area and the lake below. I could only imagine how nice it must be on a clear and sunny day. 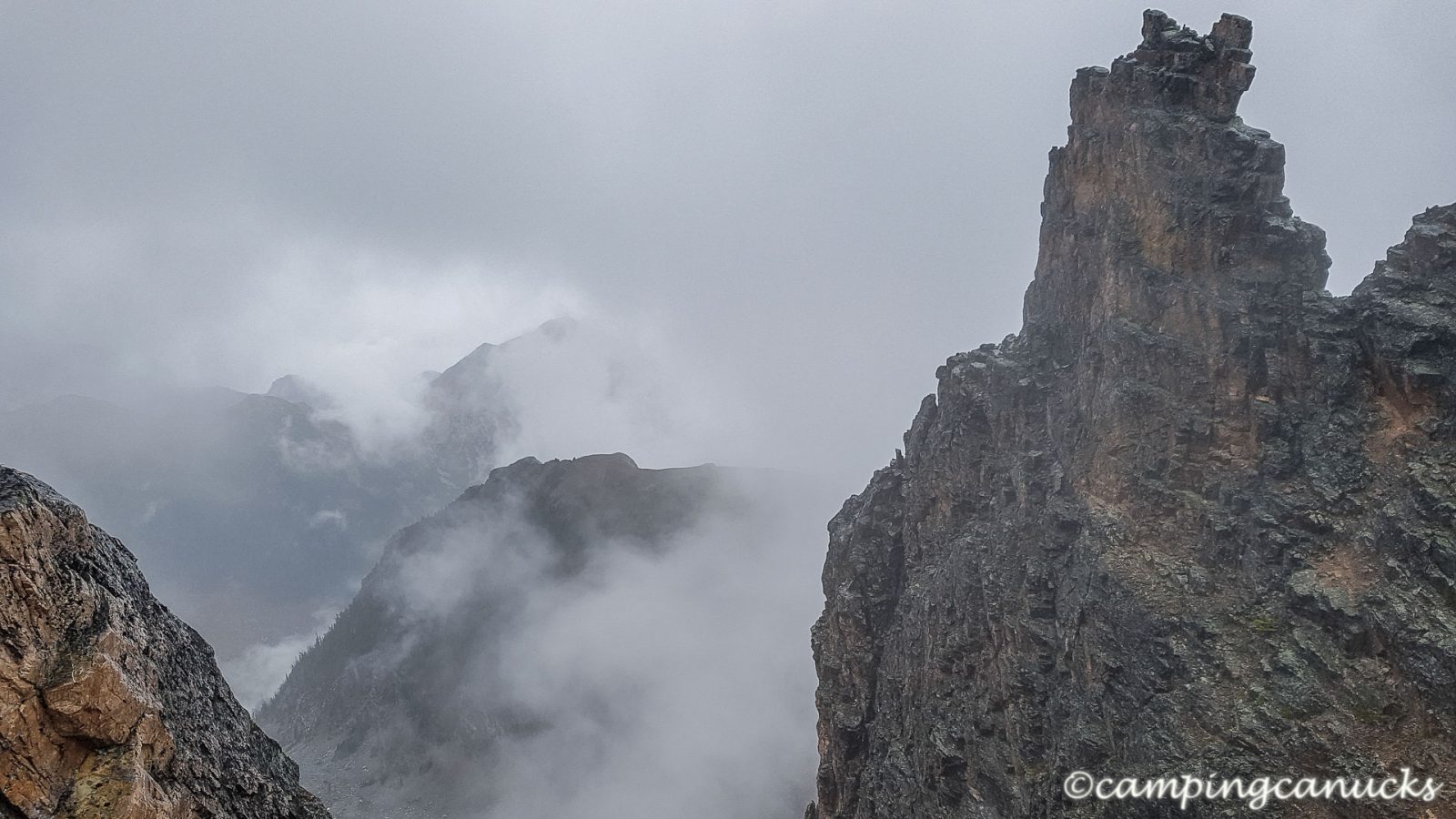 Cloudy in the mountains

I was only able to get a hint of the stunning colours of this alpine gem of a lake from high above. It certainly made me want to come back another time when the weather is better. 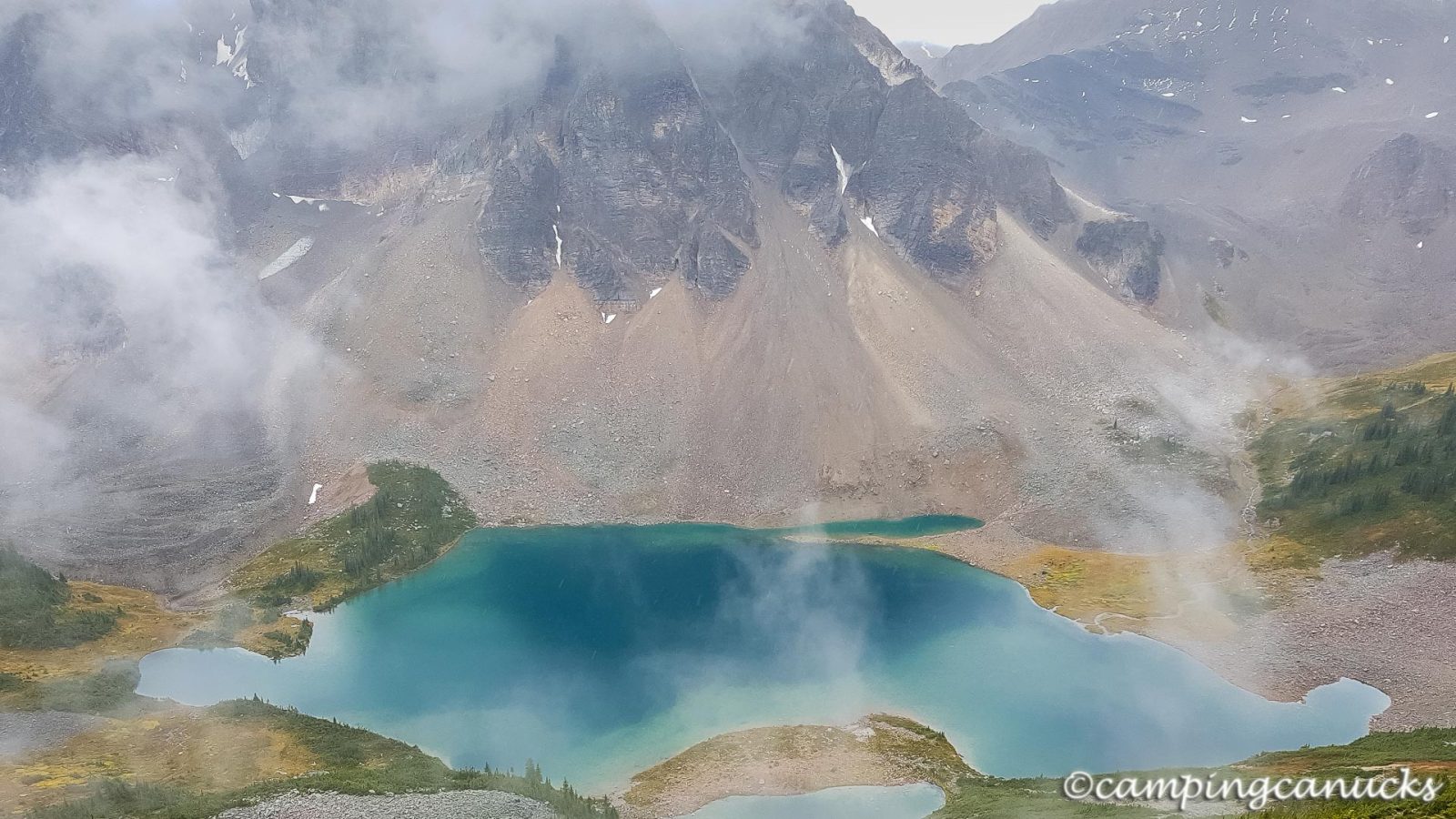 At this point, the weather was getting increasingly worse with rain and wind so I only traversed along the ridge for a short distance before deciding to descend back into the valley. I found a part that looked reasonably doable and started down. It wasn’t long though before I realized that I may not have made the best choice for my route down. It was seriously rocky and steep and a fall or tumble would have been quite bad. I expect that if I had slipped, I would have pretty well rolled all the way down to the lake!

In any case, the footing was fairly good and it wasn’t long before I was back down the trail along the lake and heading on my way back to the camp site to meet up with my hiking partners. 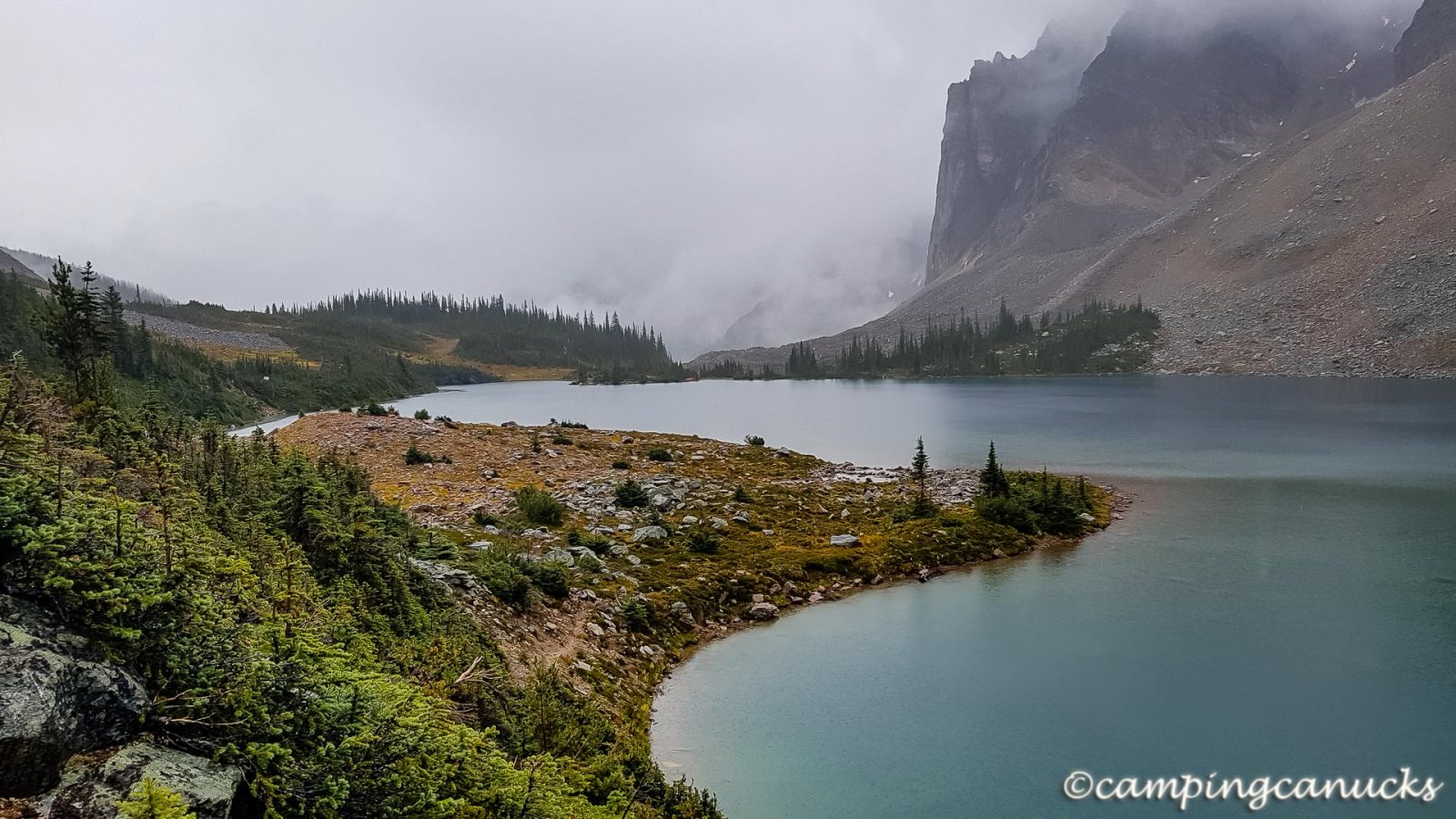 On the trail along the lake

Once we all met up at the camp site, we didn’t linger since it was very windy and we were getting blasted by the rain coming off of the lake. Luckily for us on the way down, it was blowing from behind so we weren’t getting driving rain in our faces. 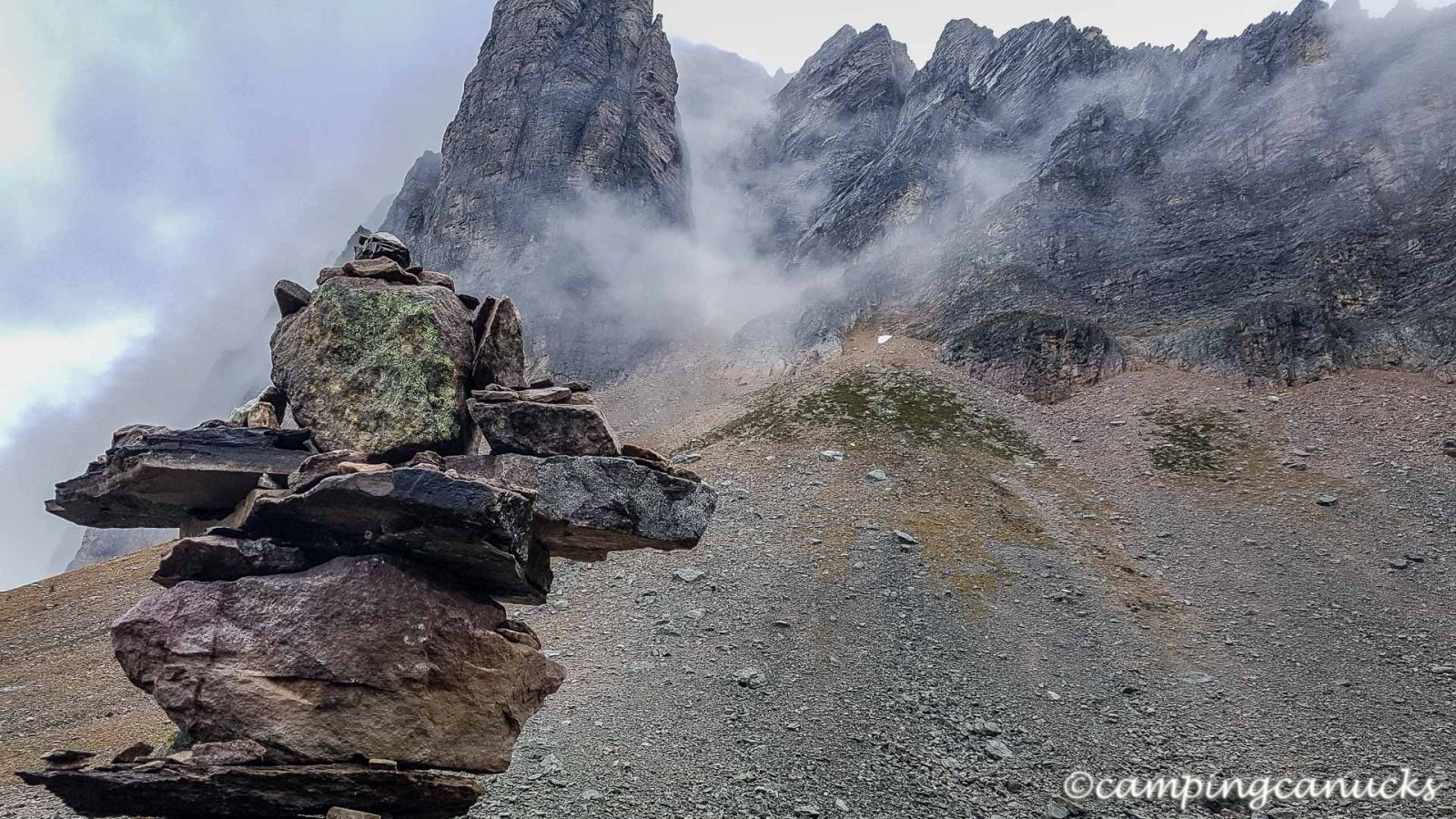 An inukshuk along the trail

We hustled down and it wasn’t long before we were back at the truck and heading on back to Golden.

Regardless of the weather, this was a very enjoyable hike. I would certainly like to do this again and possibly even pack in a tent and camp the next time around. Gorman Lake is also the northern end of the Dogtooth Traverse, which is a hike we’re keen to do at some point, so it’s quite likely we will find ourselves at this beautiful little lake at some point in the future.