There are a lot of great areas and peaks to explore in and around the Coquihalla Summit Recreation Area and we find ourselves going there quite often throughout the year to check some of them out. It definitely is an easy to access, four season destination for hiking, snowshoeing, skiing, and backpacking with many trails and routes to explore. And one of popular peaks just north of the recreation area is July Mountain, which we decided to visit in early November. Being that there was a high likelihood of there being snow at the higher elevations, we made sure to bring along our snowshoes just in case. It turned out to be a good idea as we worked our way higher into the mountains.

To reach the trail head, we exited on the Juliet Creek Road near the Coldwater River Provincial Park along the Coquihalla Highway. The road is fairly good road but there are some big water bars along the way so you will need a high clearance vehicle to drive all the way to the trail. We did in fact bottom out on one of the crossings but that comes with the territory. 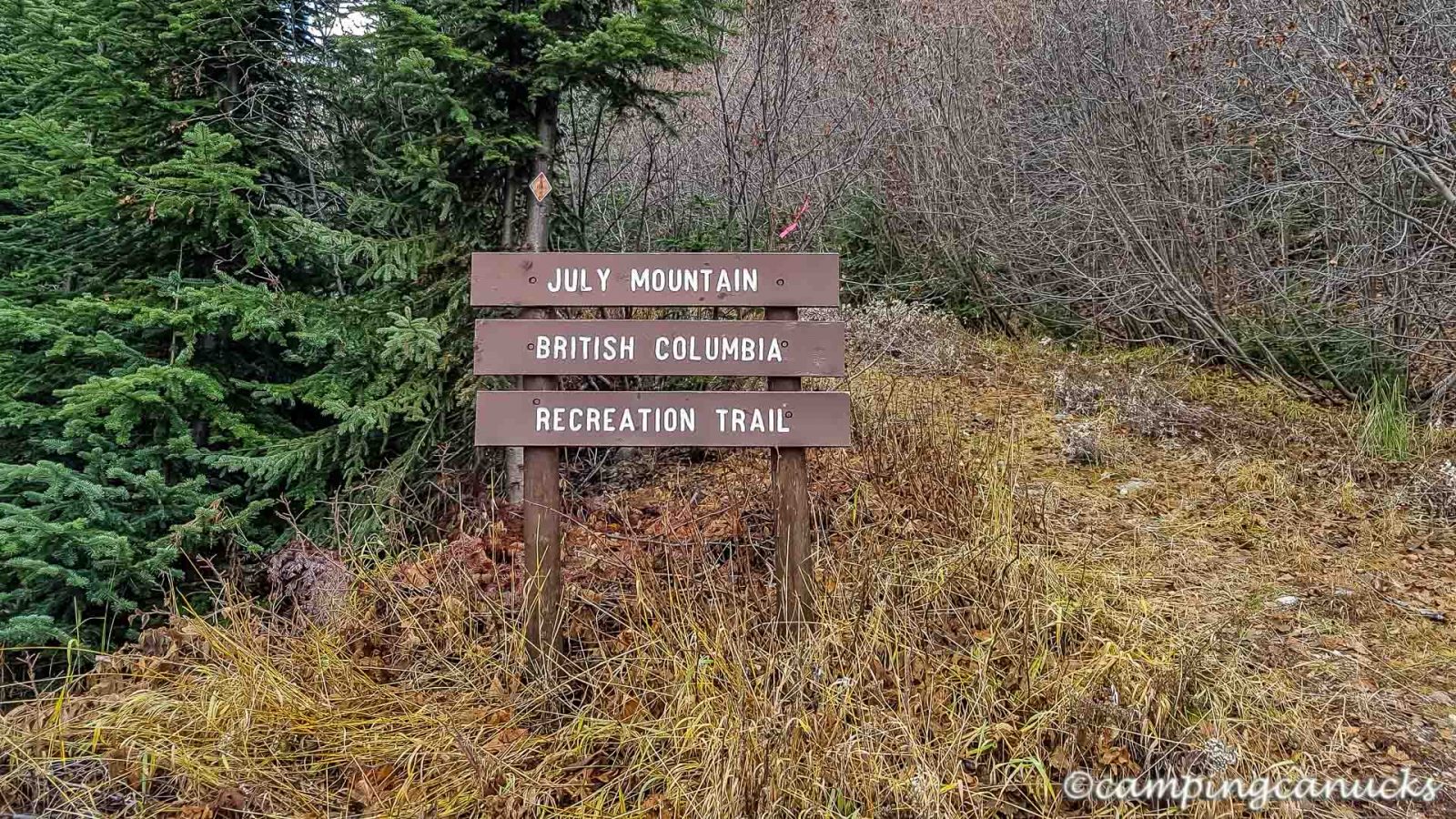 It was a tight fit at the parking area, particularly since two other vehicles arrived minutes after we did so there was a bit of shuffling to get everyone parked.

The trail is clear and easy to follow and for the first couple of kilometers, we traveled through the forest before we began the steeper ascent. Admittedly, the weather didn’t look very promising as we could see it was quite socked in and raining and snowing further up but we were well prepared and kept on our way. 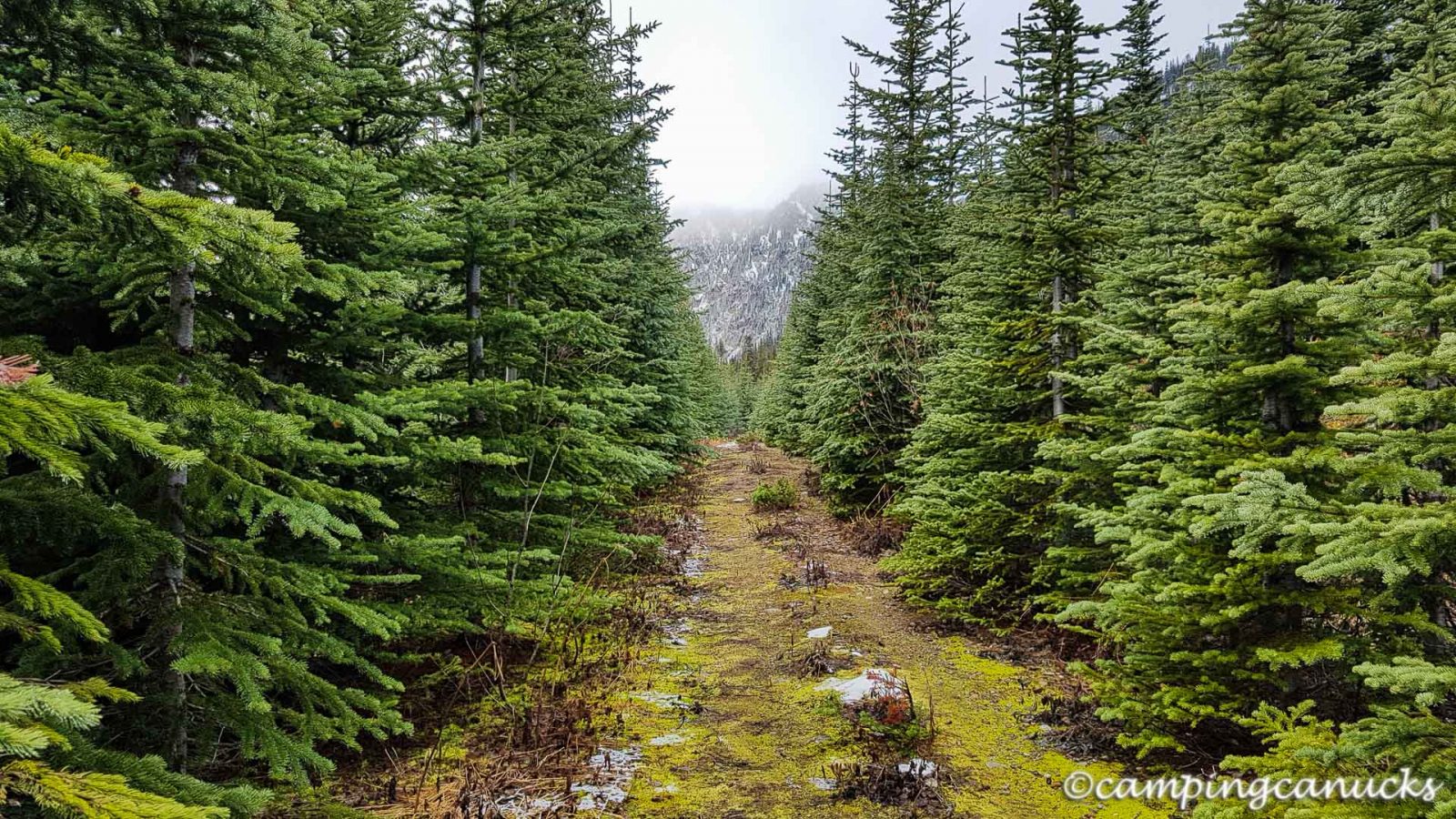 Waterproof boots were a must as we got higher up the trail as the ground was either covered in snow or just very wet and muddy. We suspect that this trail is probably quite wet throughout most of the year due the amount of rain that comes down in the area and judging from some of the large muddy patches and meadows we had to cross. 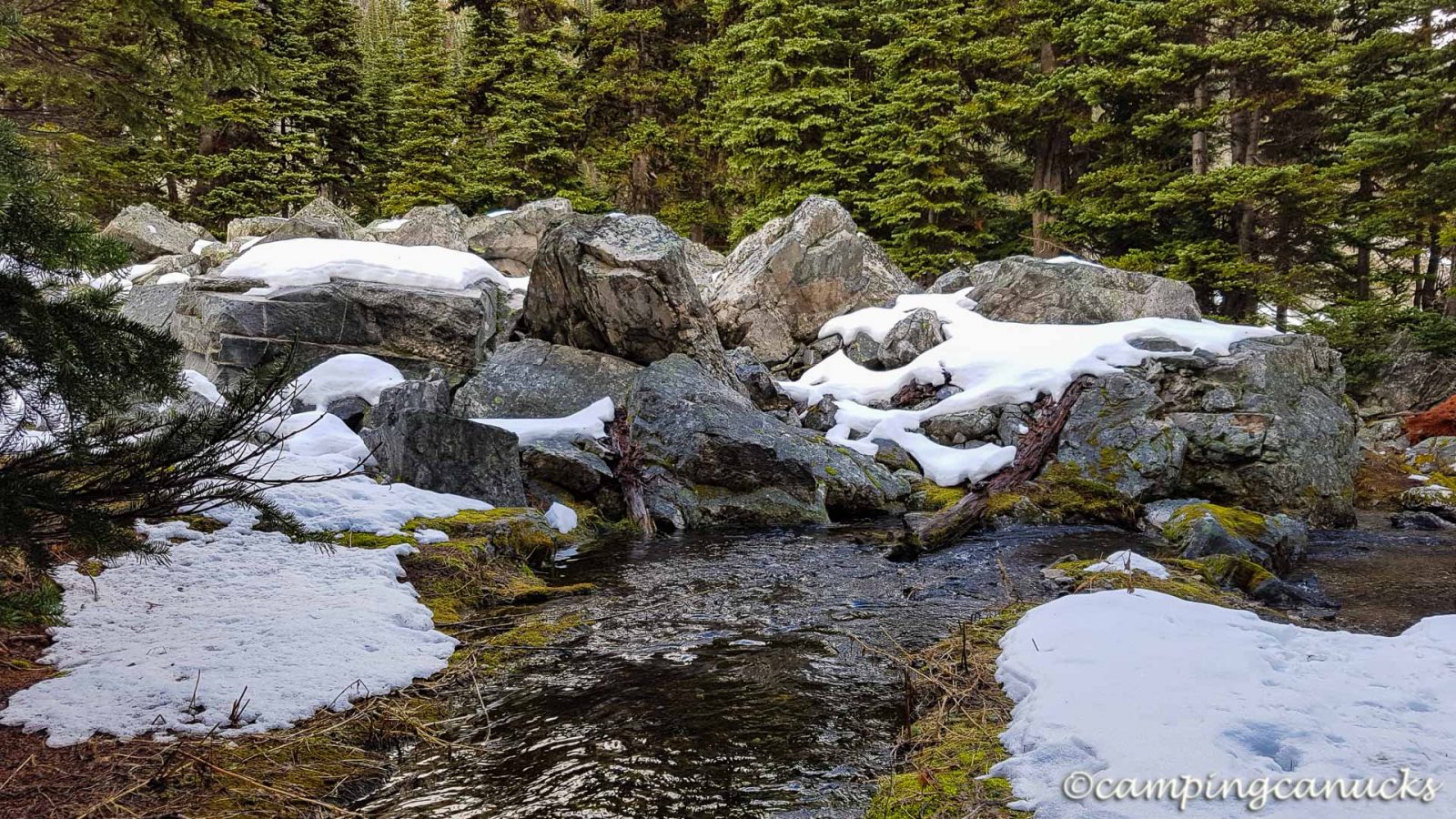 We didn’t encounter a lot of snow until we reached a big slide area and started the climb up into the alpine. At that point, it was time for snowshoes as we were now post-holing as the snow got deeper. Once the snowshoes were on, it was almost easy from there on. 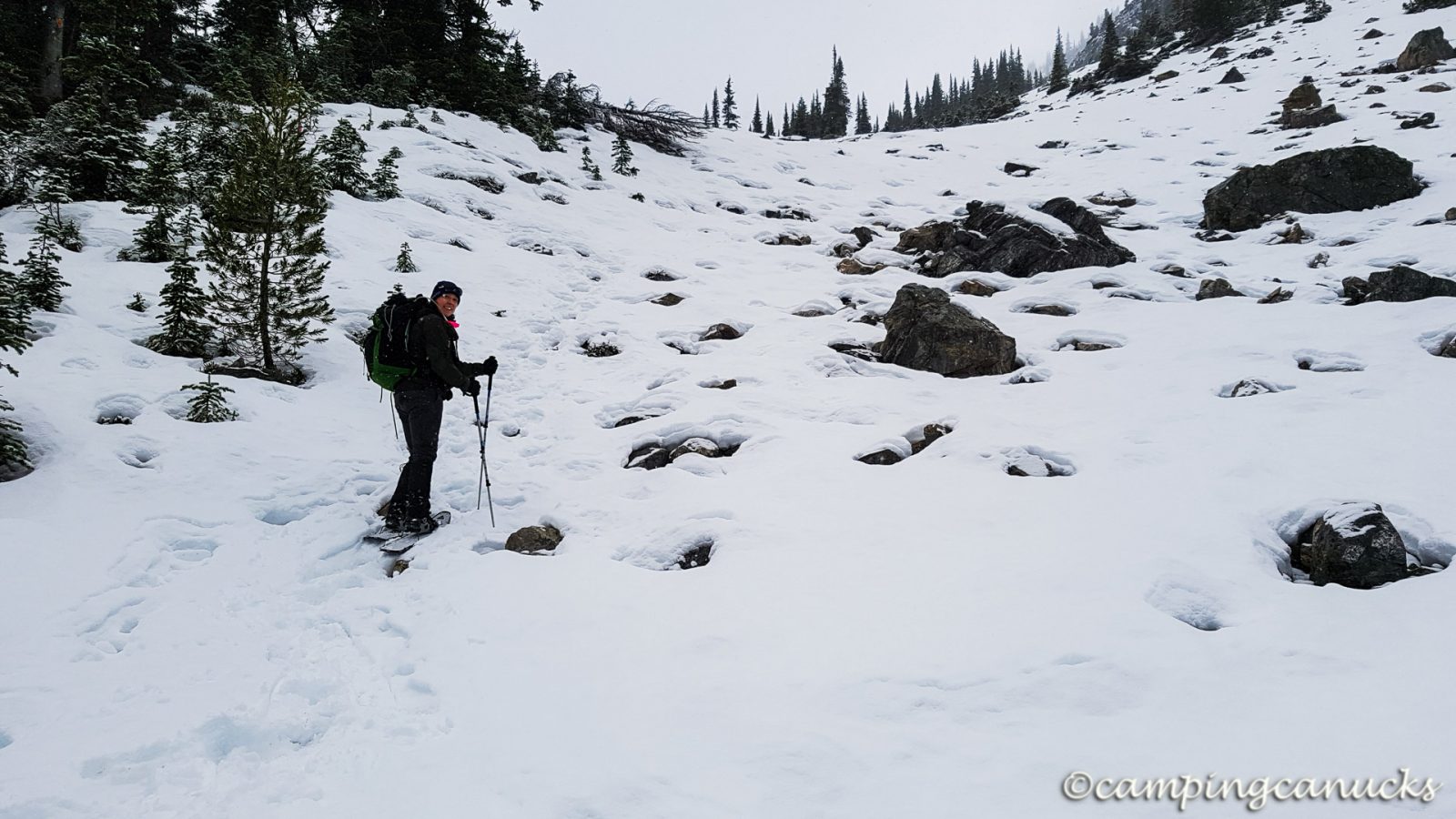 Into the snow we go

Once clear of the first climb, we started to have some good views of the valley behind. The area ahead, however, was still clouded in and we could not see any of the peaks. 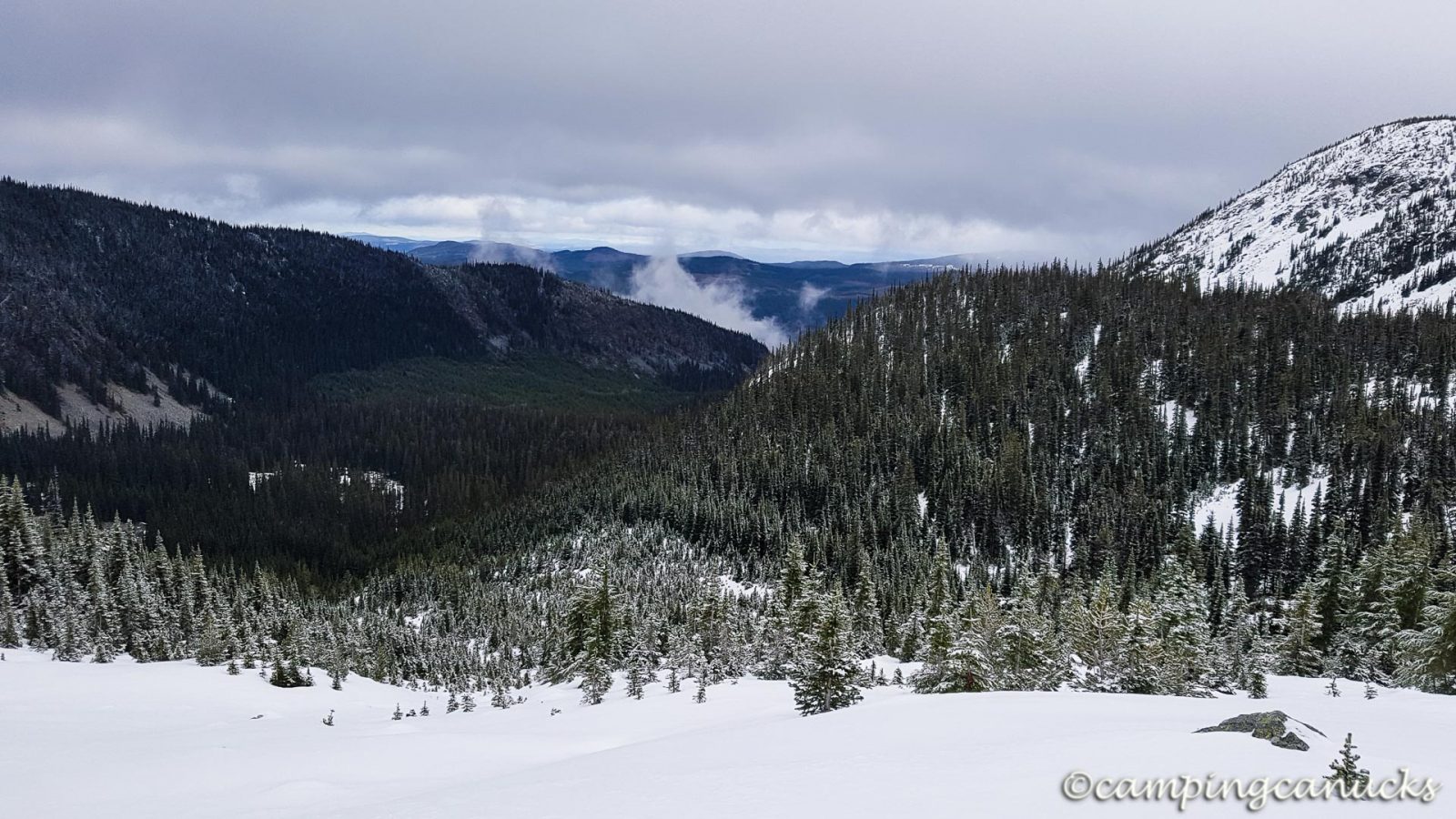 We had been passed by the other group on the trail at this point so they had packed down a nice route for us to follow as we got closer to Drum Lake. Needless to say, at this time of year, Drum Lake was frozen and the area around it was under the snow. 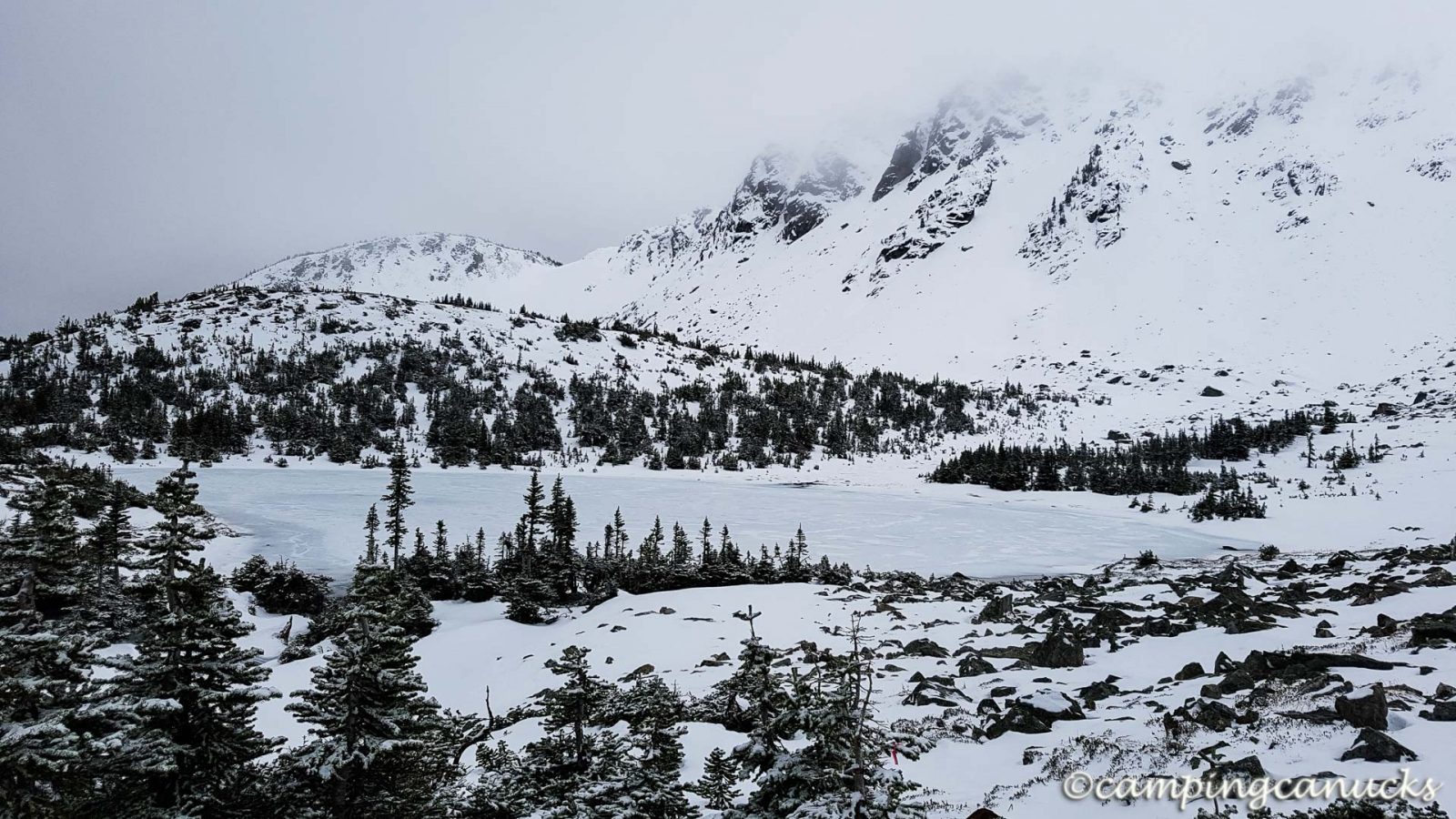 We could see the other tracks kept going up a pass a little to the west of the lake and we decided that we would do the same and go for the summit. The weather wasn’t great, with the wind and snow blowing around us, but it was still fairly easy to find our way up onto the ridge and from there to the peak.

Up on the ridge, it was the usual windy experience that one so often encounters in the mountains and we were glad it was only a couple of degrees below zero. We continued the traverse, steadily climbing to the summit and were lucky enough to have the clouds break once in awhile to give us some views. The other group passed us on their way down as we neared the summit noting to us that it was very windy at the top.

Once on the summit, the wind was unrelenting so it was not a good place to take a break. We found a good viewpoint for some photos and then quickly retreated back down to where the wind wasn’t blowing as hard. 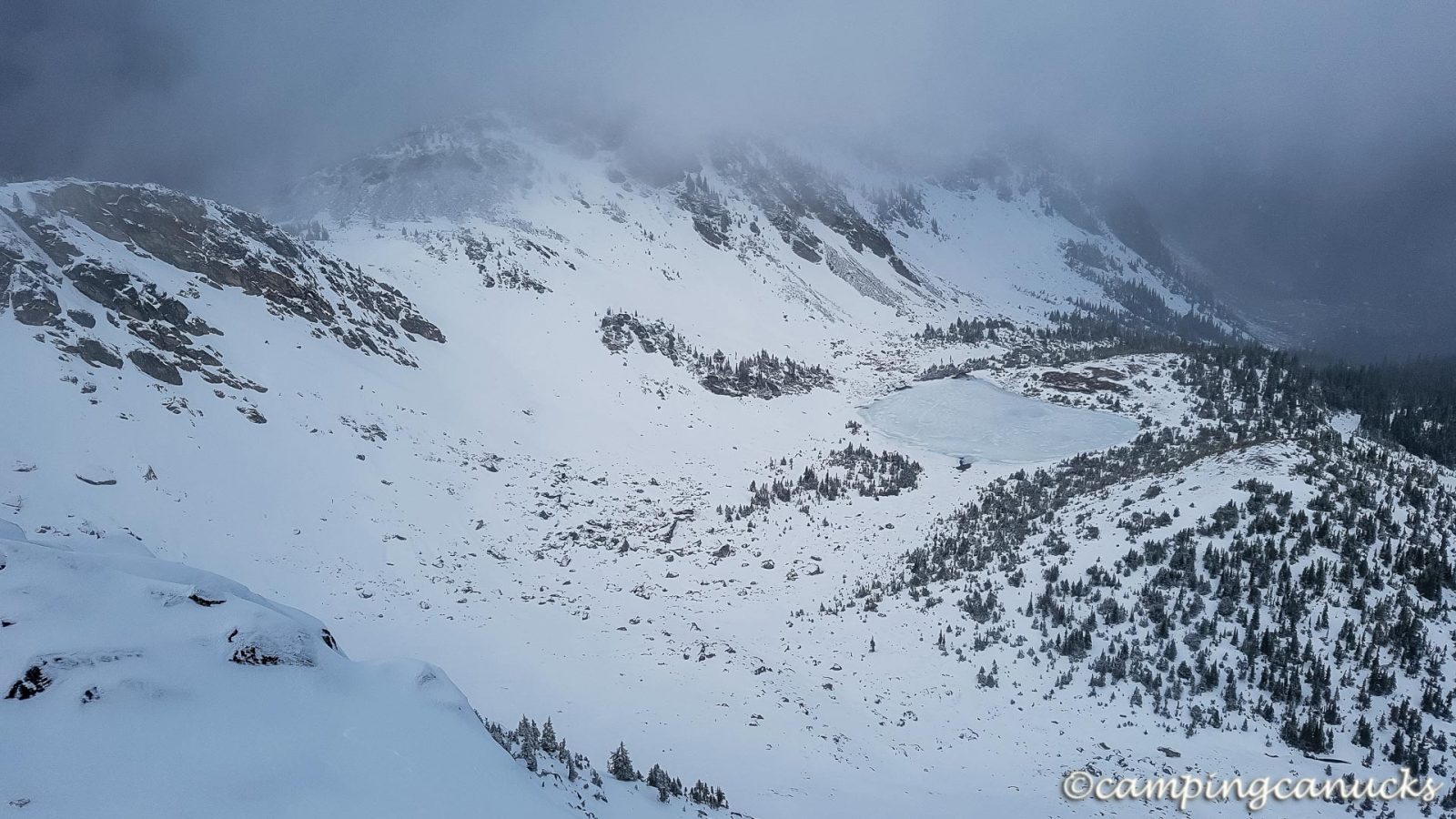 Drum Lake from the summit

We were hoping to catch sight of the many nearby peaks but it wasn’t to be on this day; there were just too many clouds. But now and again, the wind would whip the clouds away for a few moments so we were usually not completely socked in on the way down from the summit. 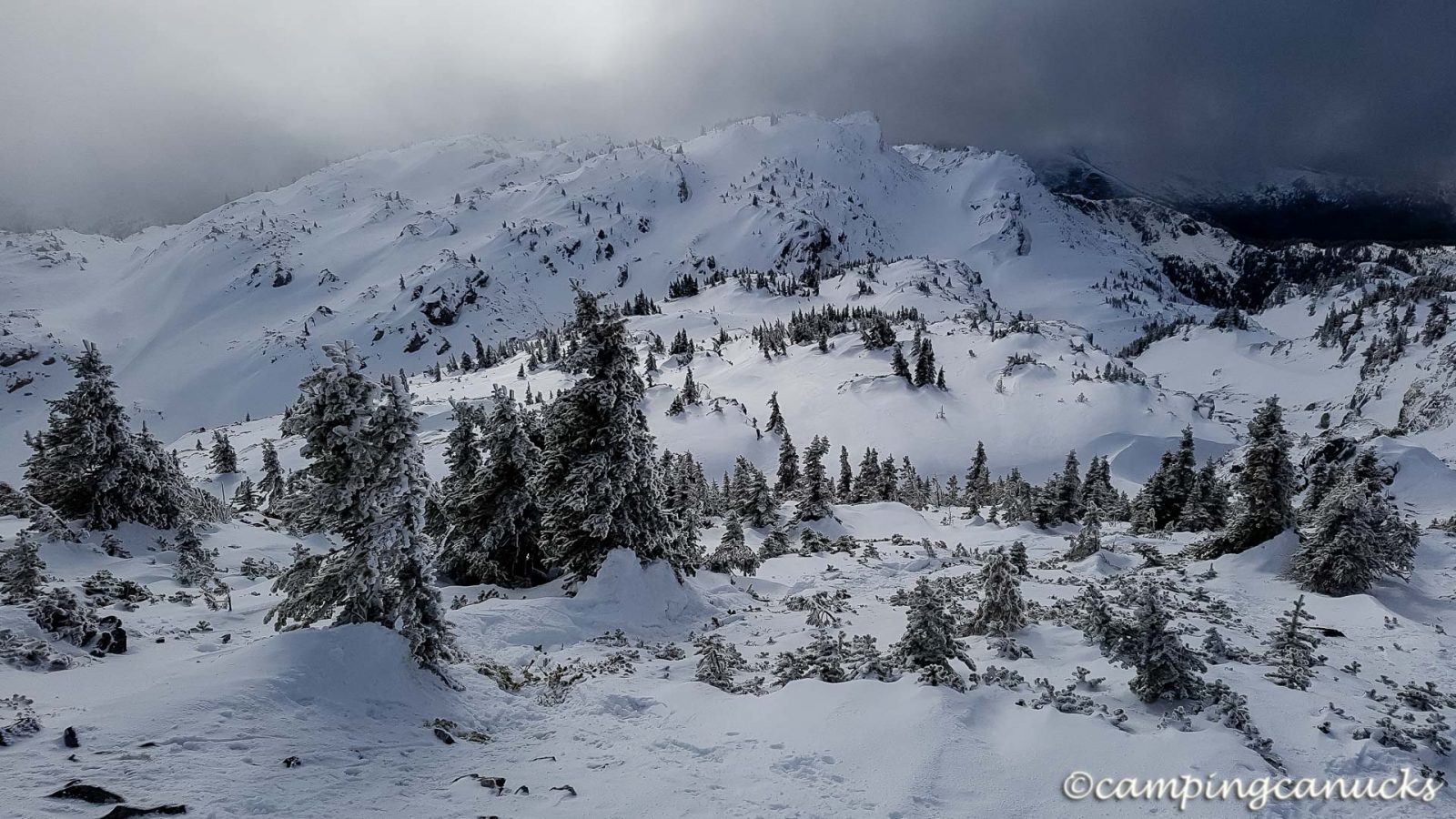 It was a pretty quick trip from the summit back down to the lake where we were able to shelter behind some boulders from the wind and take a break before heading back down the trail.

Shelter from the wind

It wasn’t long before we found ourselves leaving the snow behind and moving quickly back to our vehicle. All told, it was only a bit over nine kilometers from the parking area to the summit and back.

July Mountain was a nice little hike/snowshoe and we look forward to visiting this area again. We think that we’ll come back and spend the night at Drum Lake at some point and have some more time to check out the surrounding peaks. We would also like to try some skiing in the area but we suspect it would either require a snowmobile to get up the road or a long ski in as it’s not likely the road is plowed during the winter months.