In May of 2014, I decided to do a solo overnight trip along the Larch Hills Traverse. This is a trail that was set up and is maintained by the Shuswap Trail Alliance and runs 44km from Salmon Arm to Sicamous, or vice versa. I think it’s better known as a mountain bike or running trail, although the Shuswap Trail Alliance makes mention of overnight trips.

Using some trail info from their site and getting in contact with them gave me a plan on how to do this trip. I intended to pretty well go as far as I could in one day, find a nice place to camp, and then finish the trail the next day. As there are no facilities in place for overnight stays, I decided that I needed somewhere kind of flat with a good tree to hang a food bag and with a water supply nearby. I had made arrangements for a ride once I had reached Sicamous to take me back to my truck in Salmon Arm.

The trail begins in Salmon Arm and starts on its way up a service road for the airport. For the first 5km it’s not a very remarkable trip on the road, although I did make it more interesting by following the bike paths through the trees rather than just following the road. I also made it more interesting by forgetting my regular eyeglasses in my truck, which necessitated a 1km run back down to get them. And I did see two moose who watched me for a bit before taking off into the forest.

One of the first boardwalks.

Once you reach the end of the service road, the trail hooks up with the Larch Hills Ski area, so for the most part for the next hour or so, you’re following a series of old logging roads and single track through the forest. While not particularly scenic, it was nice and quiet and a pleasant hike. I have snowshoed at Larch Hills a couple of times but it was definitely a different experience with no snow. There was also a lot of standing water, most of which you could go around but there were times when I had to go through the water. You will certainly want waterproof boots if you are hitting this trail early in the season. Plus there were still quite a number of snow and mud patches to work through as well, so the gaiters proved to be handy. 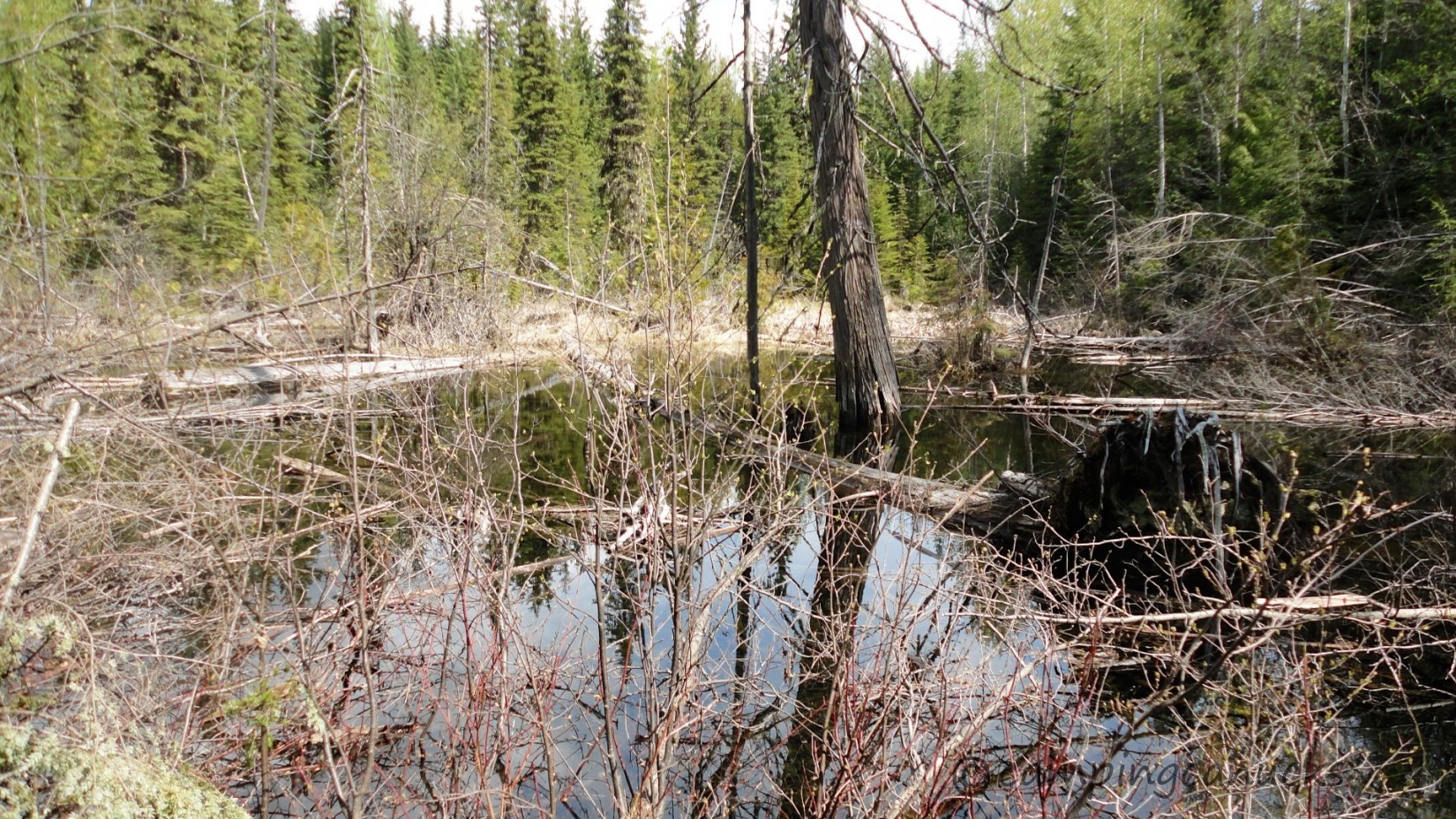 A bog along the way

Once you get past the Larch Hills area, you wind along various roads and trails that make their way through several different types of forest and even some old cut blocks. Views open up a bit once you get to the top as well, which was nice after being in the forest for so long. 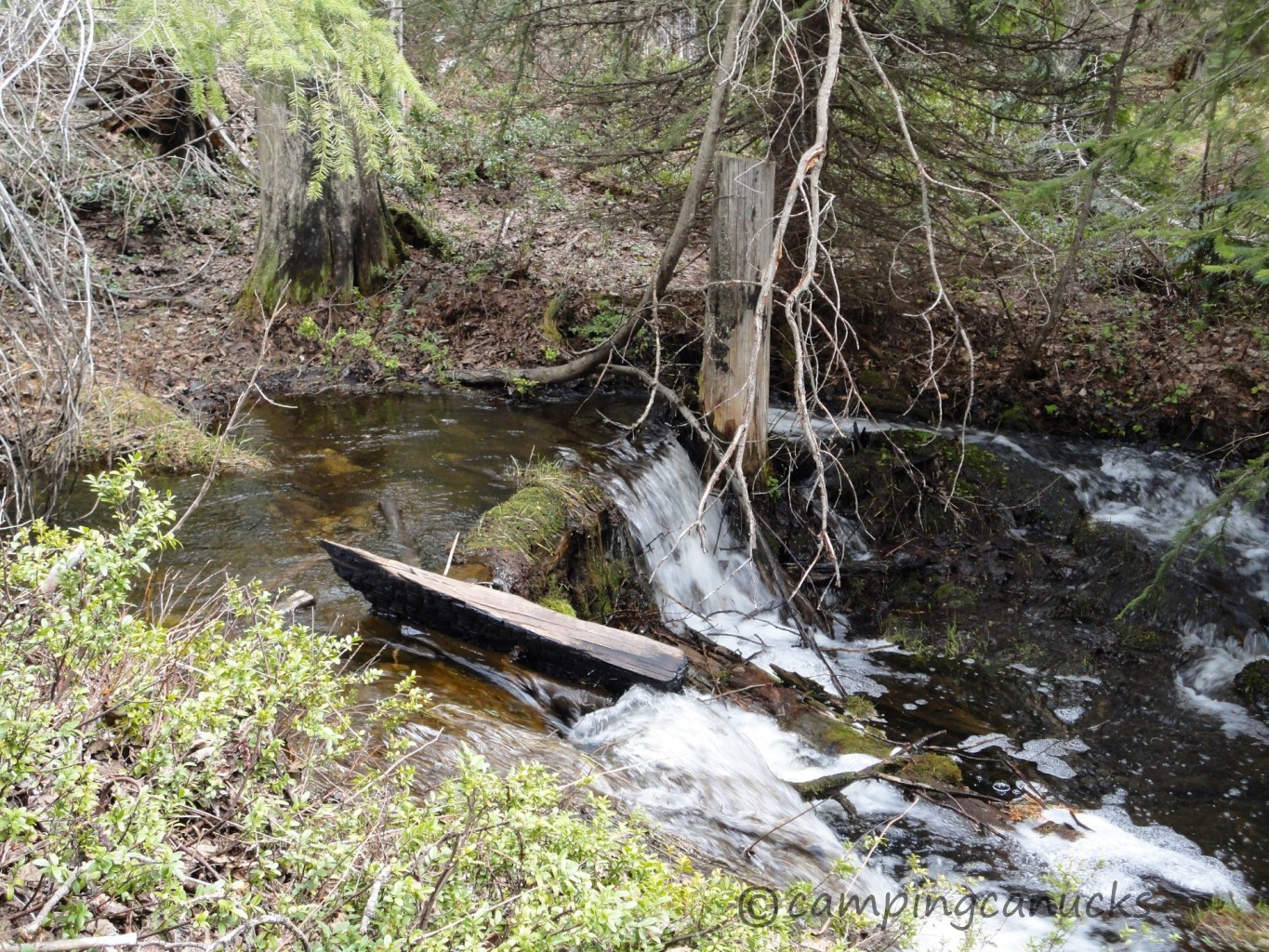 I seemed to catch a break from the weather as I watched rain pass by me but never actually come down on me. Being that I wasn’t too sure about the water situation further along the trail, I also took the time to fill all of my bottles up before moving along. It was here that I was starting to encounter more and more deadfall, which was slowing me down somewhat. One of the early season hassles before a trail has been cleared. 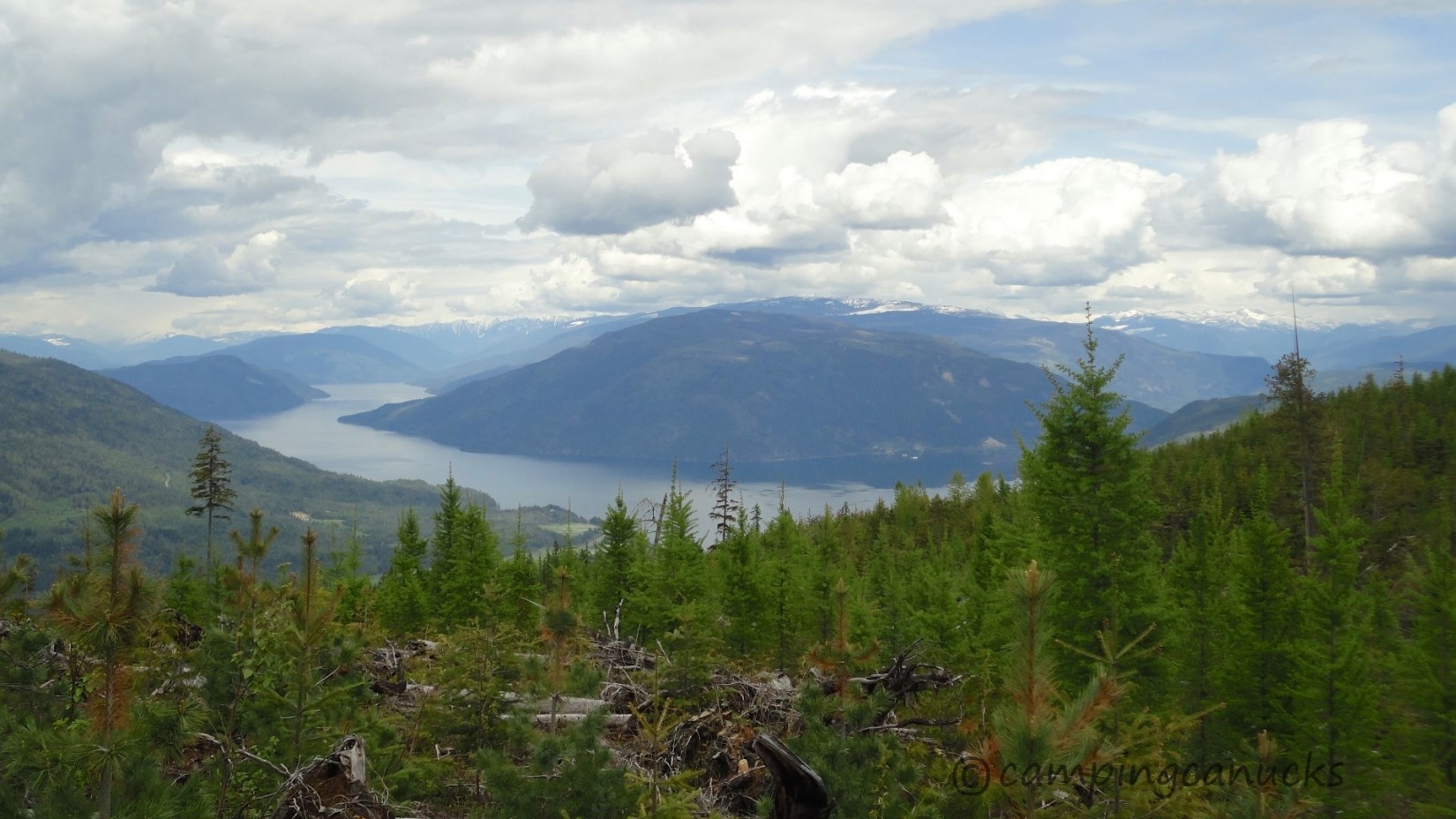 I stopped for a nice break and had some lunch near the top while enjoying the view of the lake below. I had made it about 15km or so at this point so I knew I would be keeping a look out for a good place to camp within the next 10km. After lunch I ended up back in a cedar grove and once again had to contend with many fallen trees. My hat is off to the trail crews who come in later and clean the trails up, as there would definitely be quite a bit of work involved. 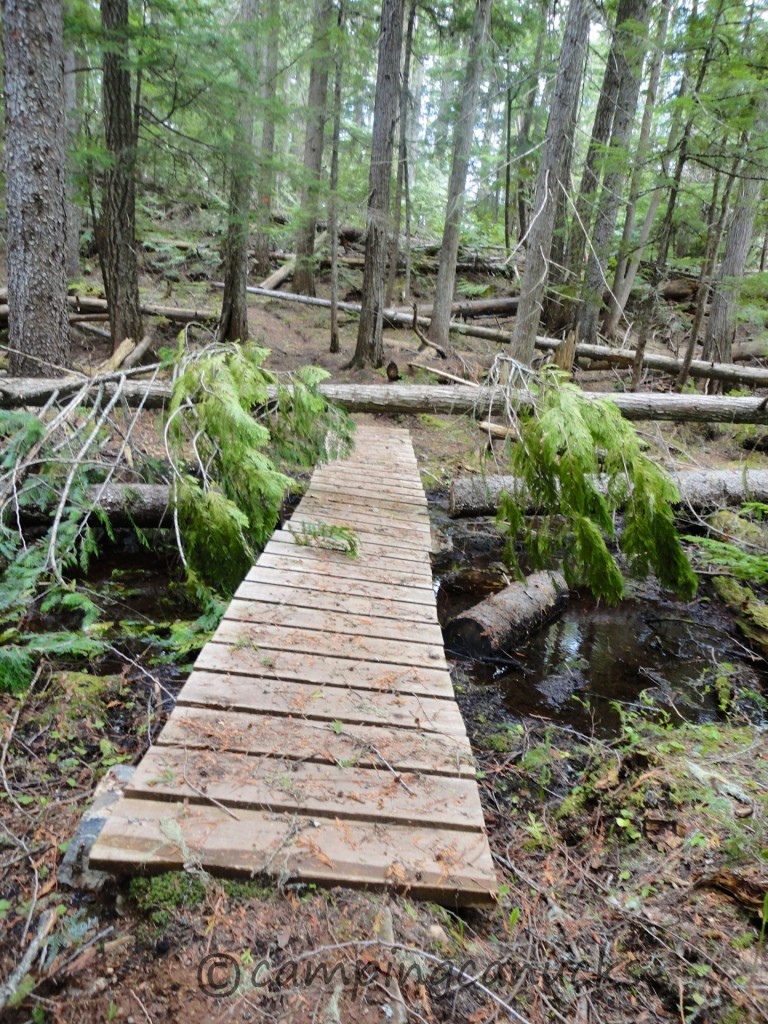 After passing in and out of the forest a few times, I found myself on a logging road continuing east. The Larch Hills Trail is fairly well marked but I did notice some missing signage here and there. It wasn’t a big deal as I had loaded their GPS waypoints on my Garmin so I was quite easily able to find my way. It wasn’t long before I spotted what was to be the first of many large piles of bear poop and I recalled being told at the trailhead that there had been a female grizzly with two cubs spotted in the area. 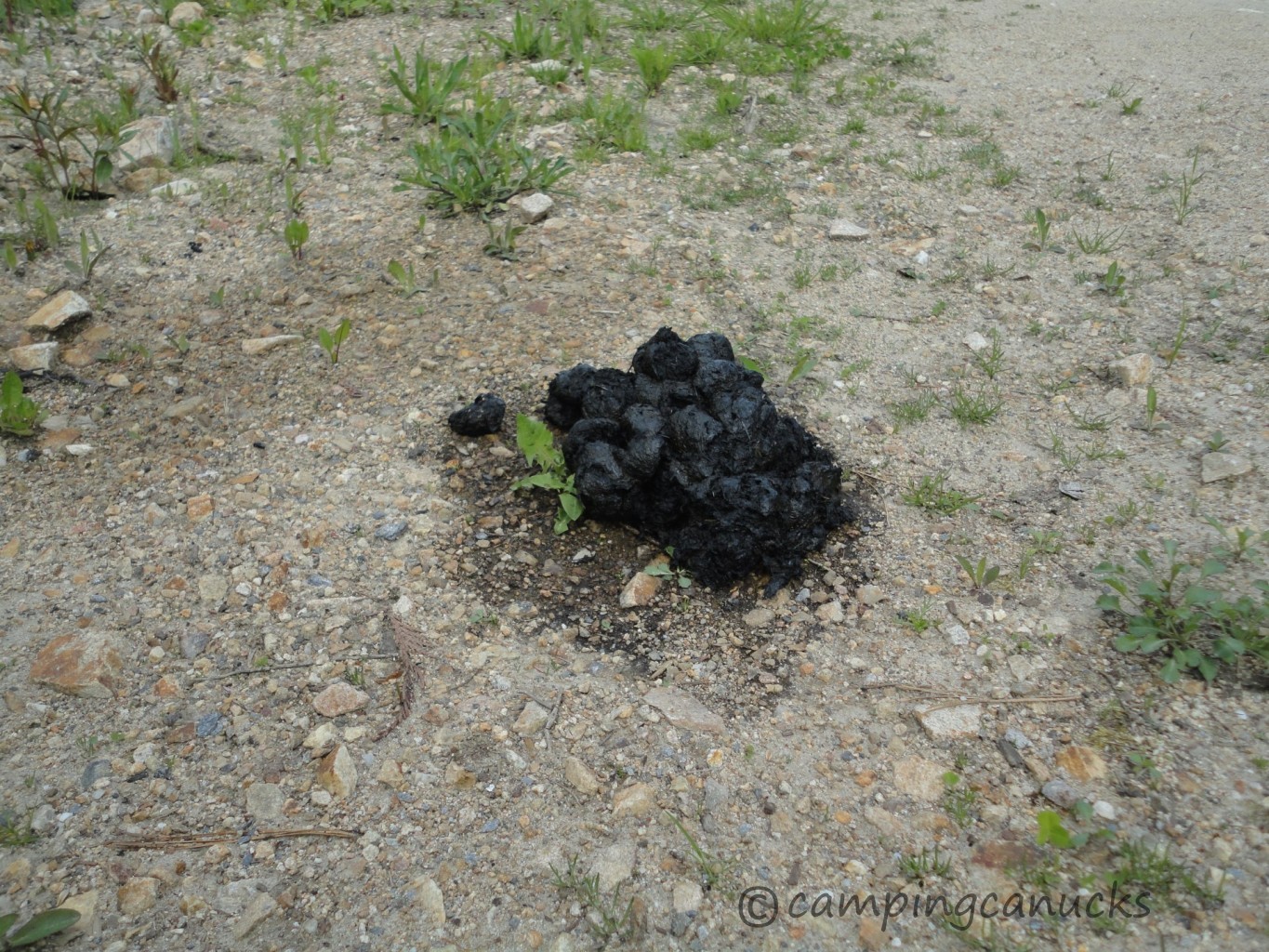 A large and fresh pile of bear poop

Seeing bear poop just reminds one to be sure to make noise and to keep an eye out for a bear. Seeing a fresh pile made me look around closely as it was obvious that a bear had been along this way not all that long ago. With nothing to do but keep on my way, I followed the trail until it weaved back into a clear cut and that is where I saw the bear. It was about 100 metres down the trail from me and it knew I was coming as I had been making plenty of noise and it was alert. It was a black bear but didn’t look to be a fully grown one. Size is relative though as you’re standing on a trail watching a bear watch you and deciding what to do.

Within a few seconds, the bear turned and ran away from me down the trail right into the thicker forest where I was headed. That was great. It was with some trepidation that I proceeded into the cedar grove. I did not see the bear again in there but I began to see a lot more poop on the trail which meant that the bear or bears were definitely using the trail on a regular basis.

After passing through the cedar grove, I hooked up with a double track trail that was in an alarmingly bushy section. At this point, I was less than a 1/2 km from where I had spotted the bear and now I was in an area where visibility was less than 20 meters, thanks to the brush. What do you do when you know there is a bear nearby? You sing. Or at least I do. And I also told the bear I was leaving his area and that he should just be patient as it wouldn’t be long before I was gone.

Within minutes, though, I heard a lot of crashing and the sounds of a tree or trees getting knocked over or knocked around. Out came the bear spray! Effectiveness notwithstanding, I didn’t find it really assuring holding that little can as I continued on. Fortunately I saw no further sign of the bear. As luck would have it, I also came across what could have been a good camping spot not too much further down the trail. But after what I had just been through, I had no plan to stop here and camp.

So I just pressed on. At this point I had hiked over 25km. Looking at my maps, I realized that it wasn’t far before I would come across a road that would lead back to the highway. As I had cell service, being that I was so close to the highway, I decided to bail off of the trail. I realized I just wasn’t comfortable camping by myself after having come so close to a bear. It didn’t take me long to get in touch with my cousins Brianna and Jarrod in Sicamous and make arrangements for a pick up. 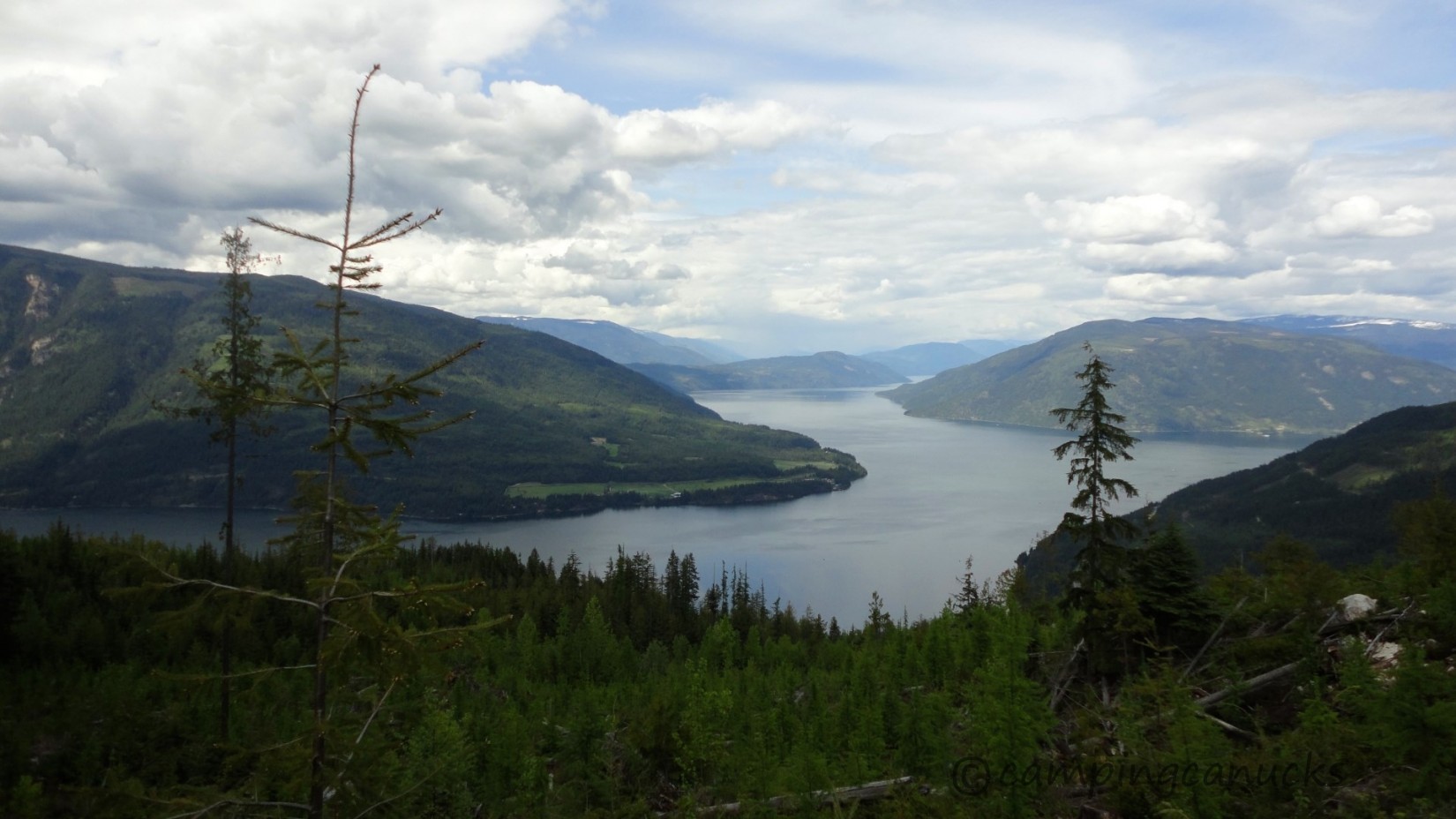 Another view of Shuswap Lake

From there it was a quick trip down a long winding road back to the Trans-Canada Highway where my ride awaited. Shortly after, I was back at my truck and ready to head for home. All said, I ended up hiking 33km which wasn’t too bad as I was taking out a new pack for the first time.

I was a little disappointed that I didn’t complete the full trail as I had been looking forward to the views above Mara Lake and having the satisfaction of getting this trail done. I’m not sure whether I’ll attempt another overnight traverse in the future but I do intend to either bike or run the trail in a day some other time.