On the first weekend of July 2014, Kirk and I decided to head out to Trophy Mountain in Wells Grey Provincial Park for a couple of nights at Sheila Lake. Kirk had been up there a few times before but this was my first time. It’s been on my list for years but I just hadn’t found the time to do it. This is a relatively accessible camp site as it’s only 5.5 km from the parking lot and a quick and easy way to get into the alpine for some great hiking. Because of this, we drove to the trailhead and hiked in on a Friday night which worked out well as it’s light quite late this time of year. The trade off, is that it is still quite snowy and cold in the Trophy Mountain area this time of year. The cold wasn’t all bad, though, as it kept most of the bugs away. 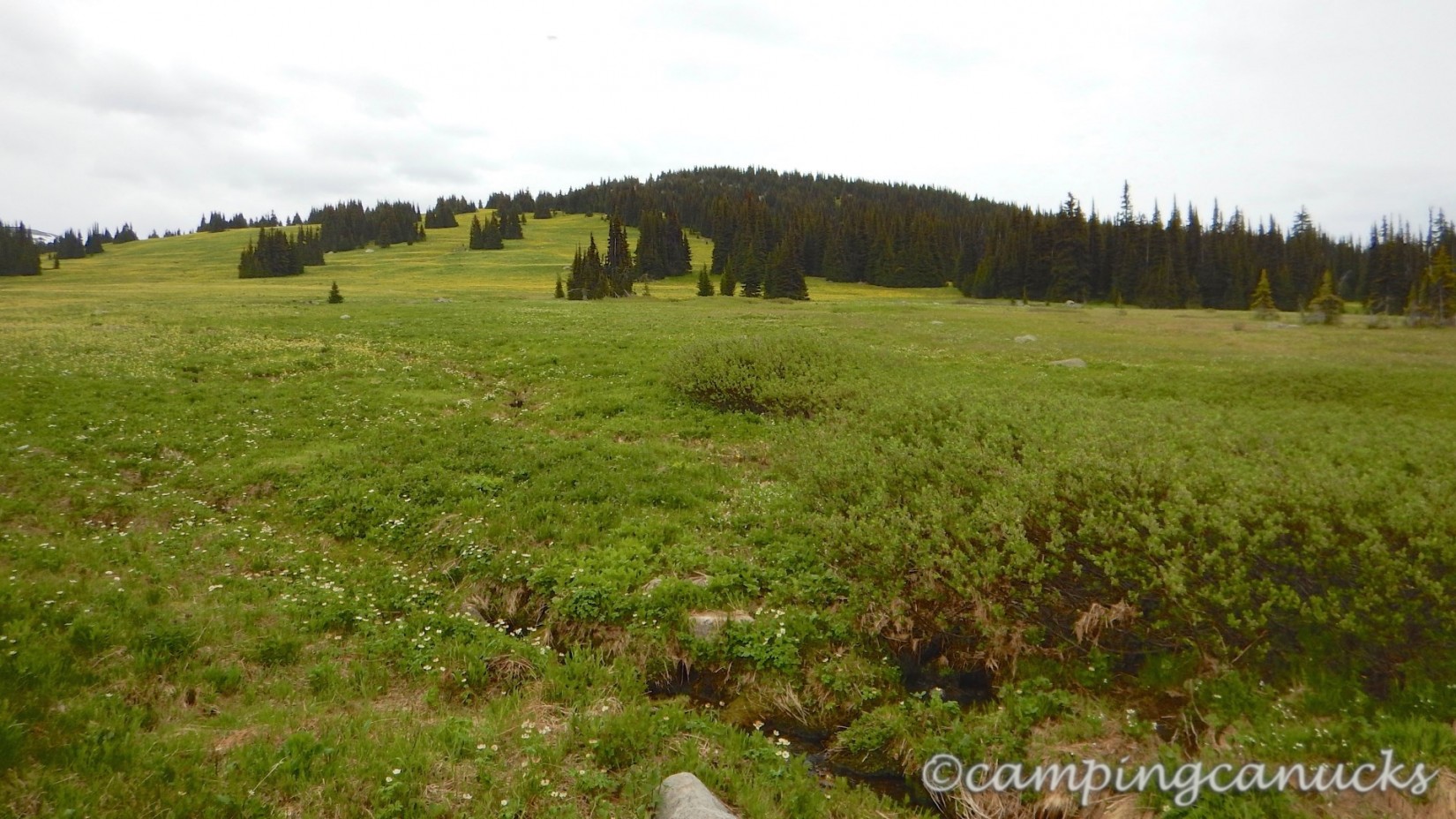 The meadows just starting to bloom 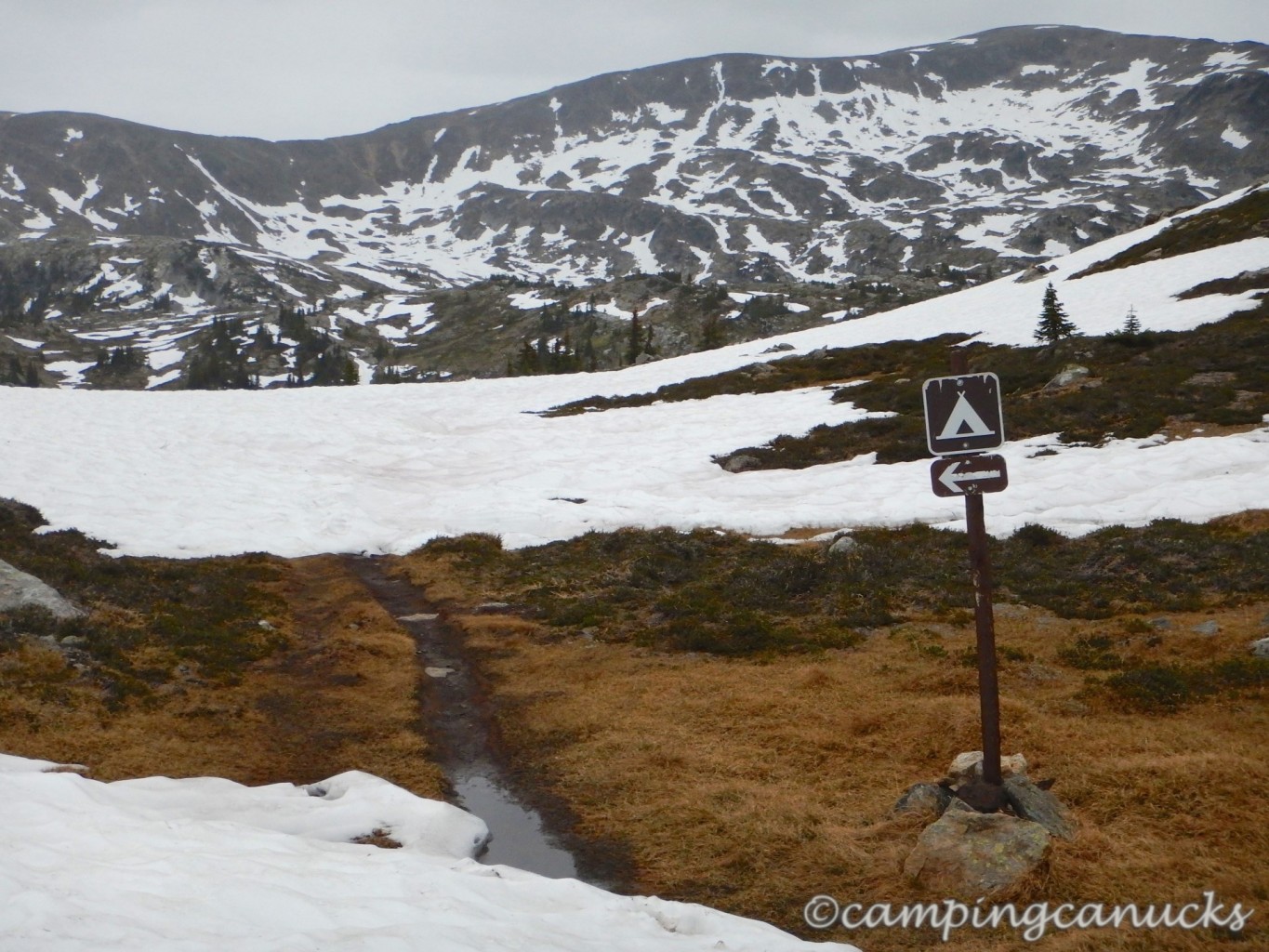 This way to the camp

Having seen many pictures of Sheila Lake, I was really looking forward to beautiful, clear waters of an alpine tarn. I had forgotten just how much snow and ice can remain in the alpine well into summer, so instead of a beautiful alpine tarn, I was greeted with an icy and grey lake. 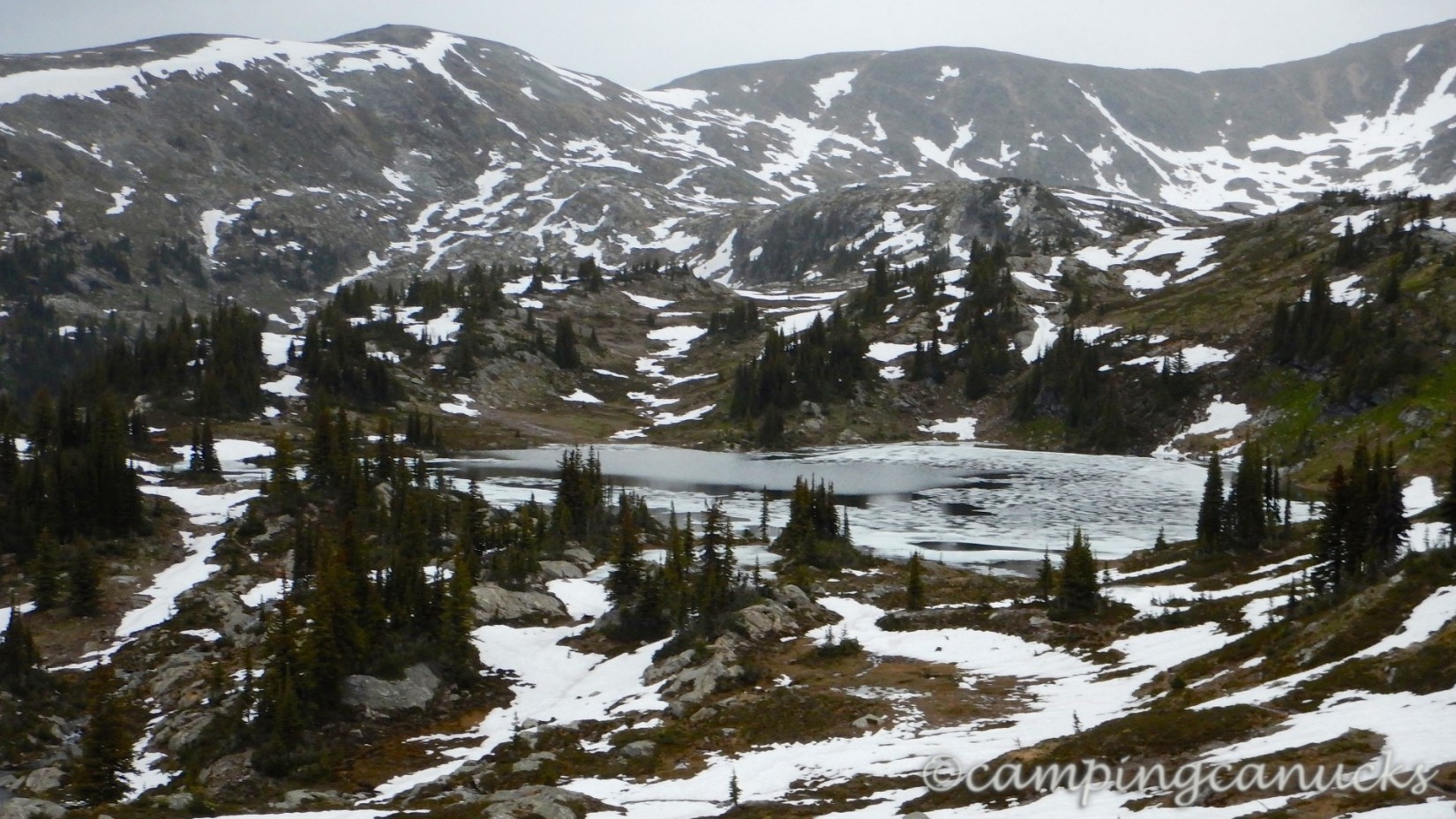 With some light rain coming down, we pretty well set up the tent, had a beer (a perk of short trips) and crashed for the night. The weather forecast had called for some better conditions come morning so we planned for an early start in order to get some peaks in the next day. The next day after a quick breakfast, we loaded up the day packs and headed up towards the peaks. Sometimes you could make out the trail but oft times it was still snow covered so we more or less just aimed our ourselves at Silvertip Ridge and headed east. 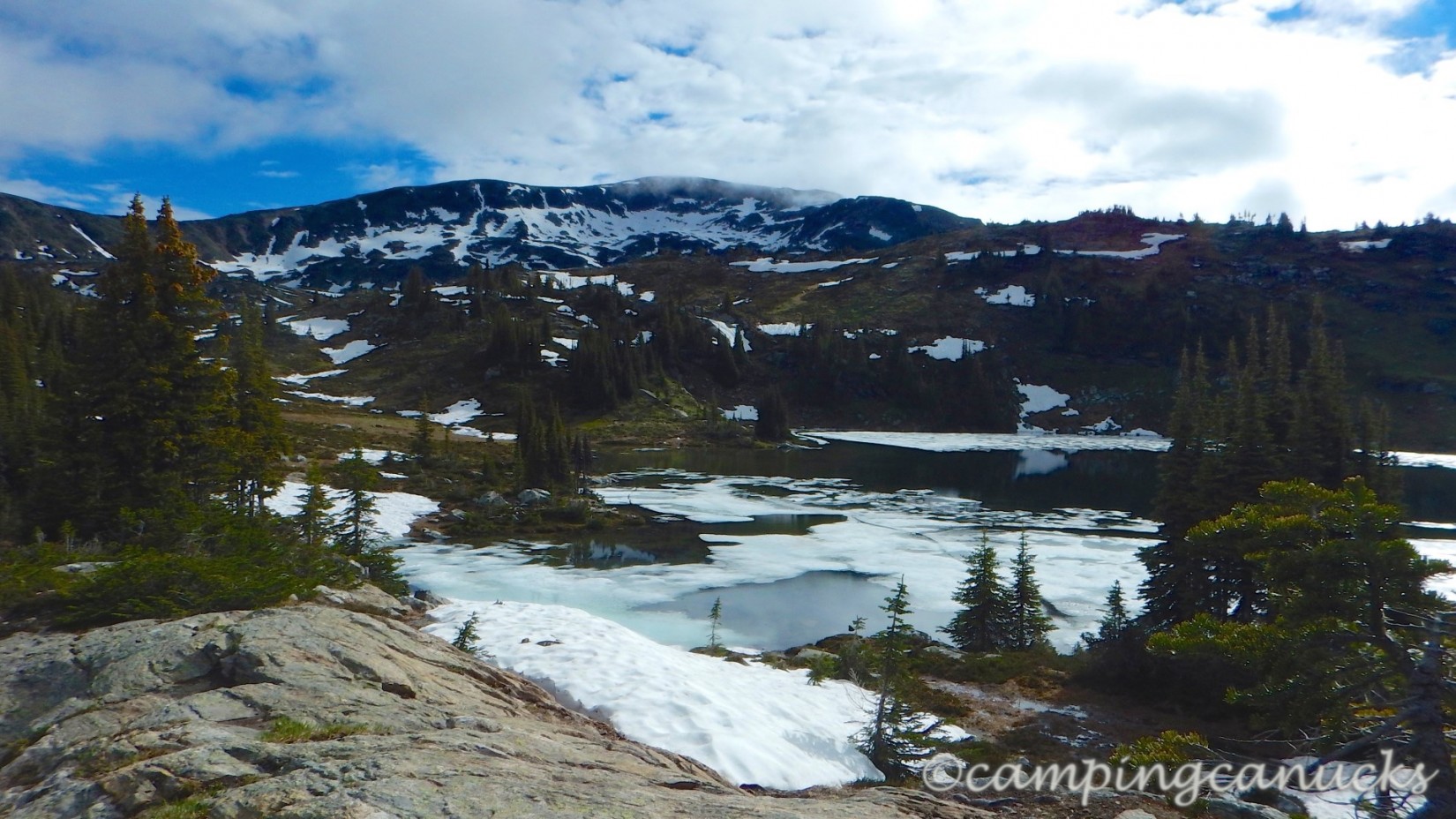 Sheila Lake in the morning 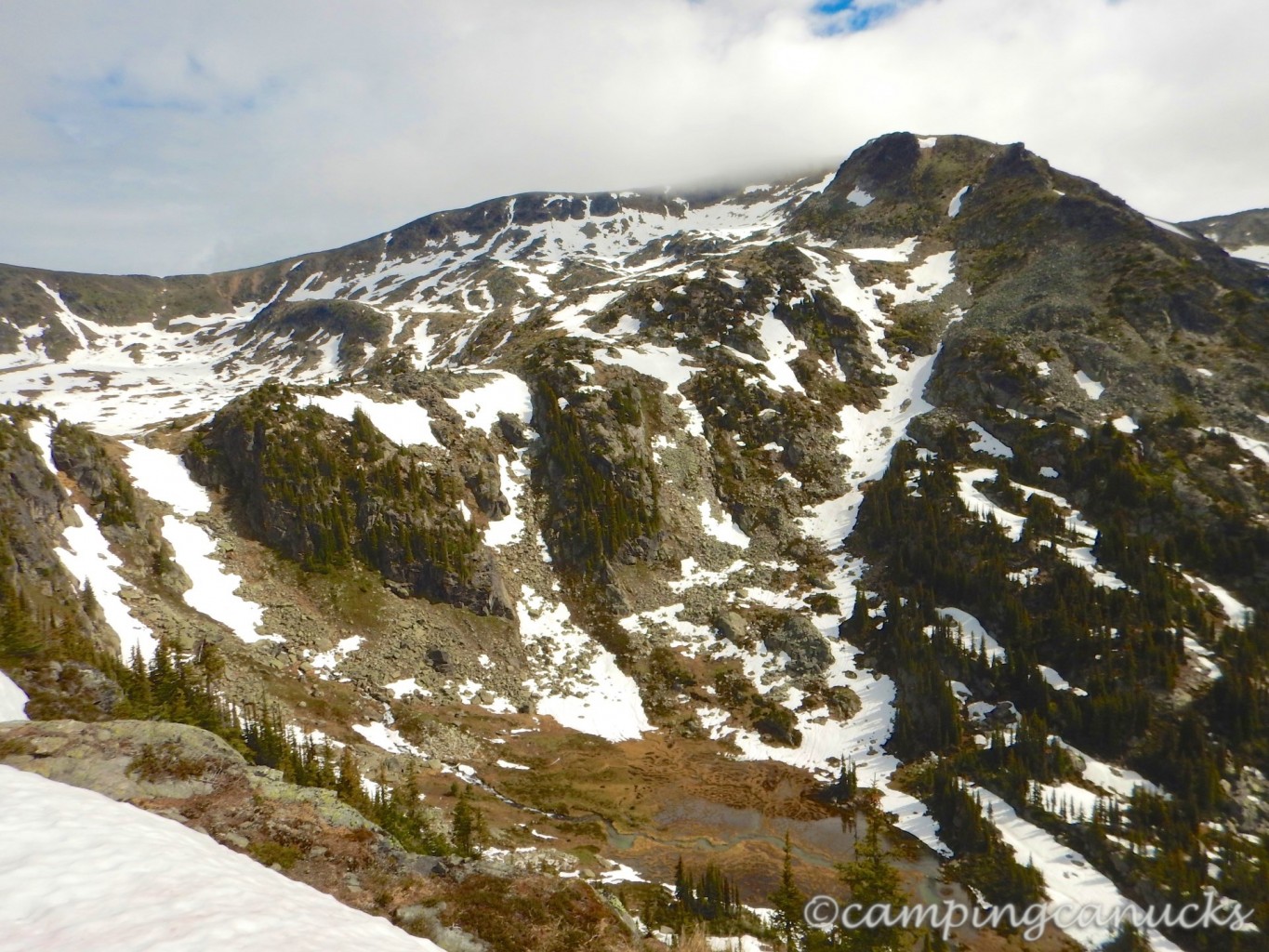 Since we didn’t really know the area, we soon found out that our approach to Silvertip Ridge was not feasible due to a valley between us and the ridge. Rather than head back down and around to approach the ridge, we decided to go up and work our way to the top of Trophy 2. This wasn’t too bad to accomplish even having to find ways over or around water and crossing plenty of snow. Eventually we found ourselves quite a ways up on a ridge with a steep scramble through a cut above us. Carefully we went up the snow back and scrambled up the rocky slope which proved to be steep but not really difficult. Getting through the cut, we were greeted with a nice wide shoulder ascent to the top with views of Cwemcwem Lake and Trophy Mountain itself. 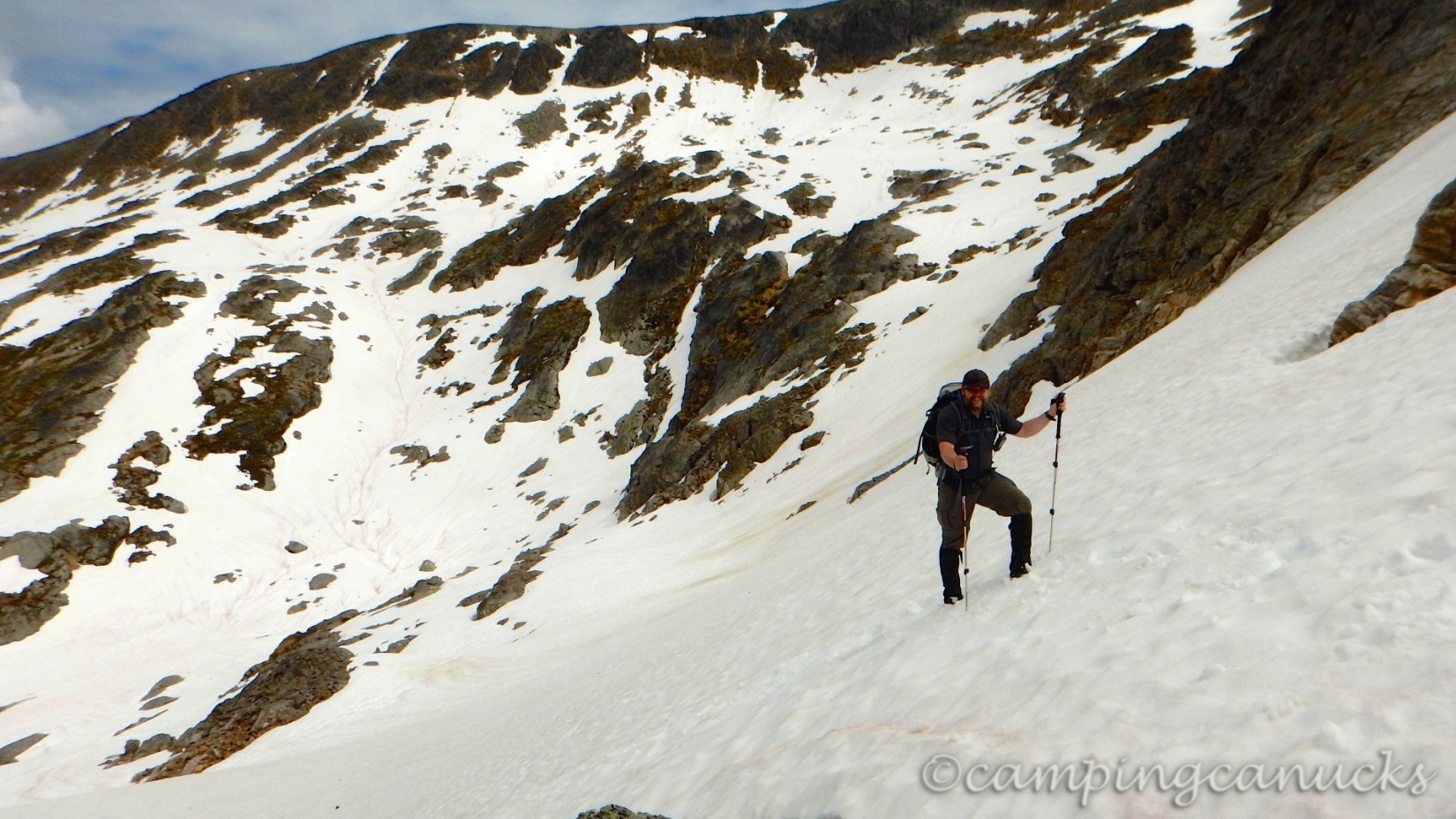 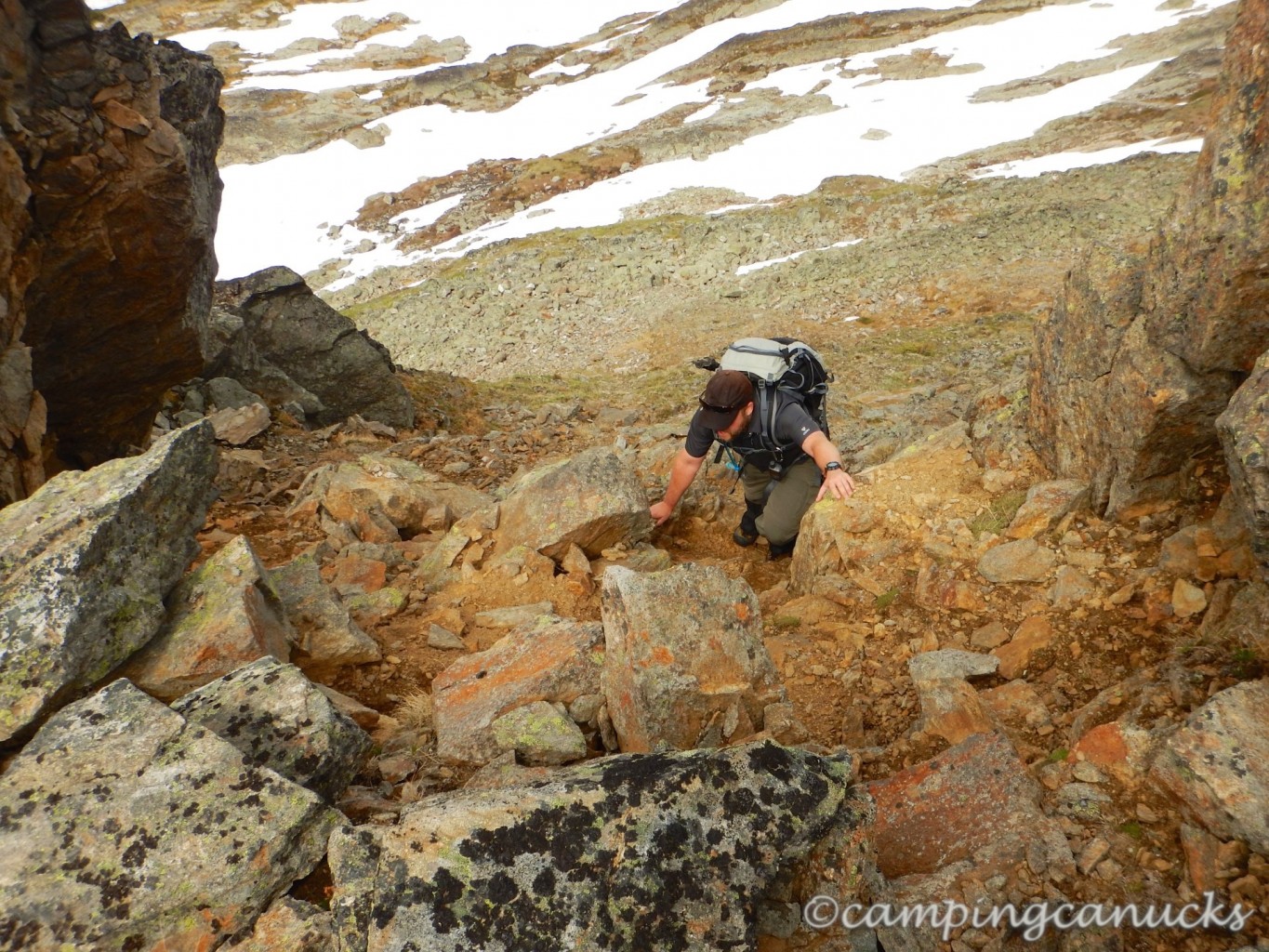 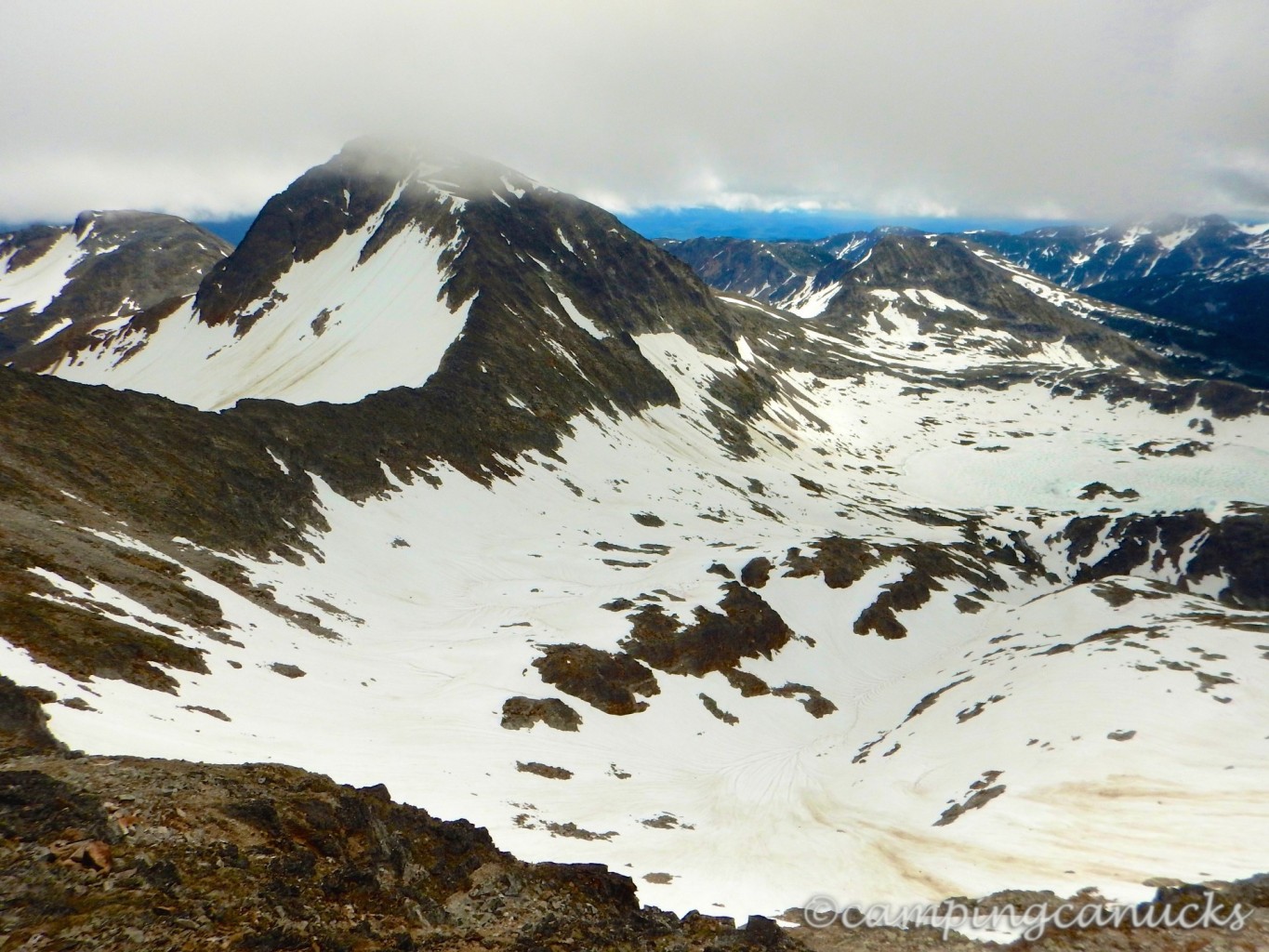 Trophy on the left, Cwemcwem under the snow on the right.

From there is was a much easier scramble to the top. You did have to be careful, though, as there were plenty of sharp, loose rocks to slip on. From time to time we also spotted footprints so this was obviously one of the ways that people take to the top.

Once at the top, we were greeted with some great 360 degree views of the area, although it would have been nicer if we had had clear skies. Our views were somewhat restricted due to a lot of low clouds, particularly to the east. We considered heading to the top of Trophy but with lots of cloud cover moving in and the high possibility of rain, we decided to leave that for another day. As well, we would have been approaching Trophy on its steep west side which is advised to be done in dry conditions. 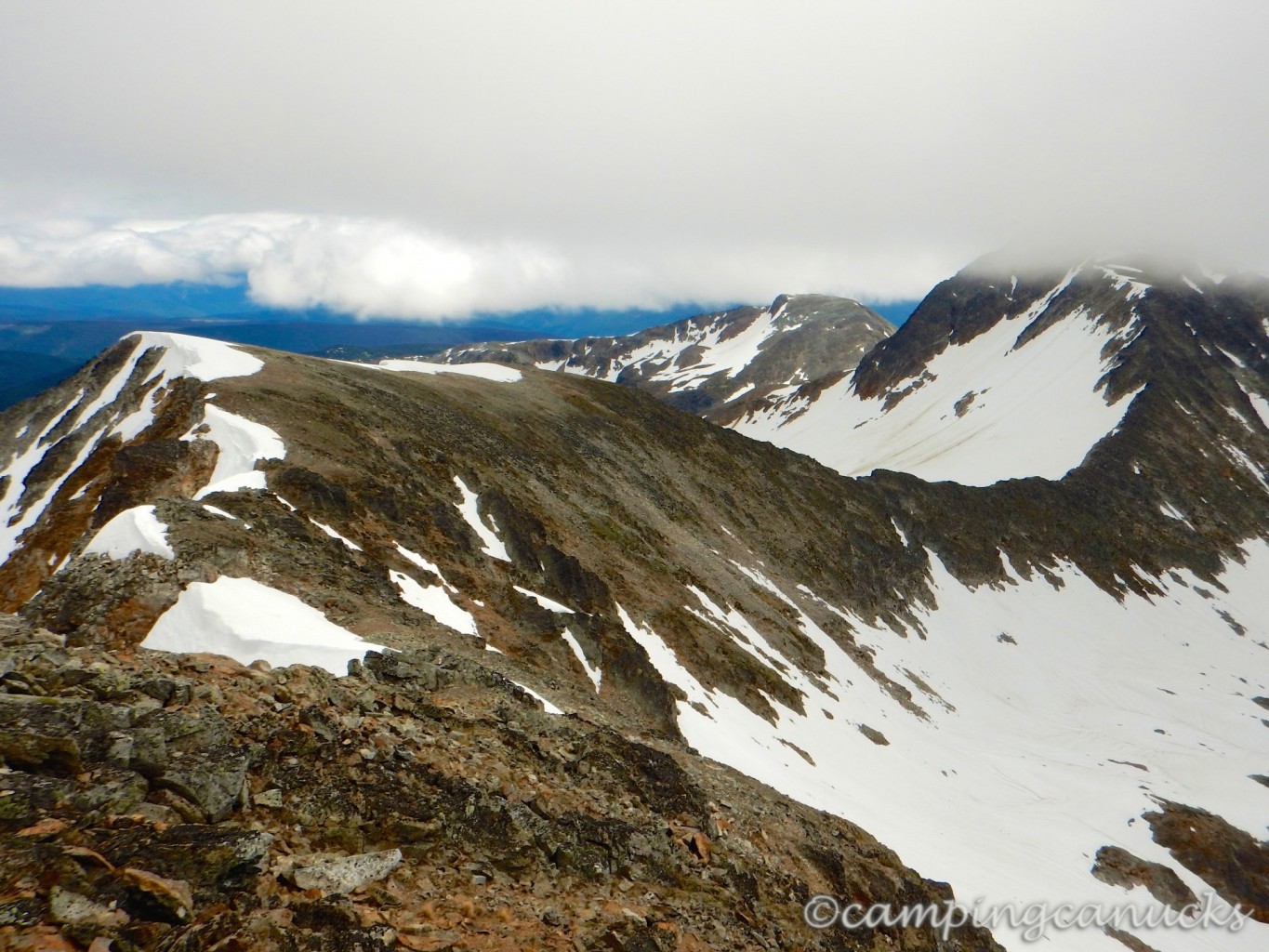 After a brief snack behind a conveniently located wind shelter (it was damned cold up there), we made  our way west just following the shoulder. It was slow going and very rocky, so we really had to be careful not to slip or fall. Our trip down was occasionally punctuated by the shriek of a pika but we were not able to spot them. 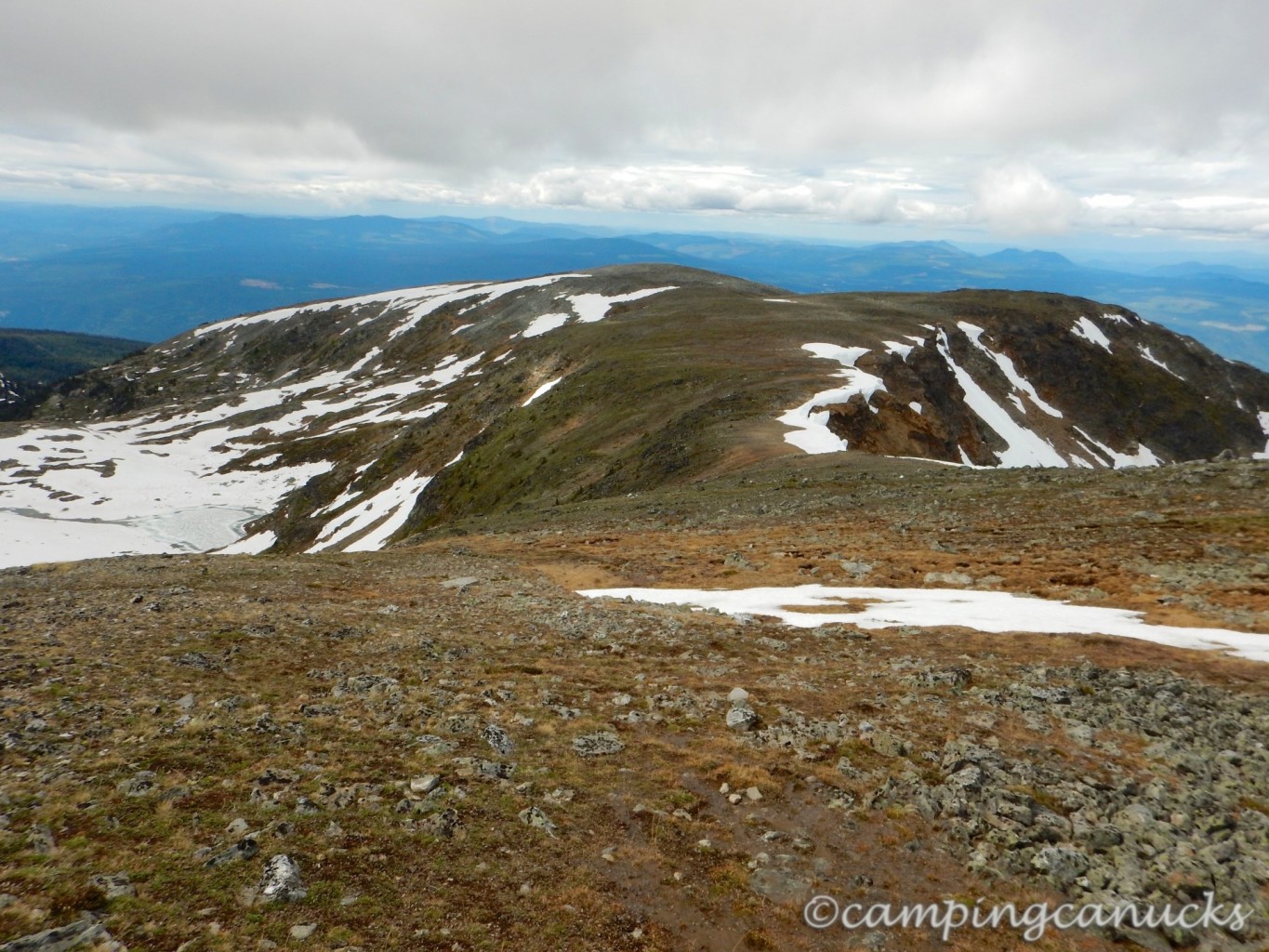 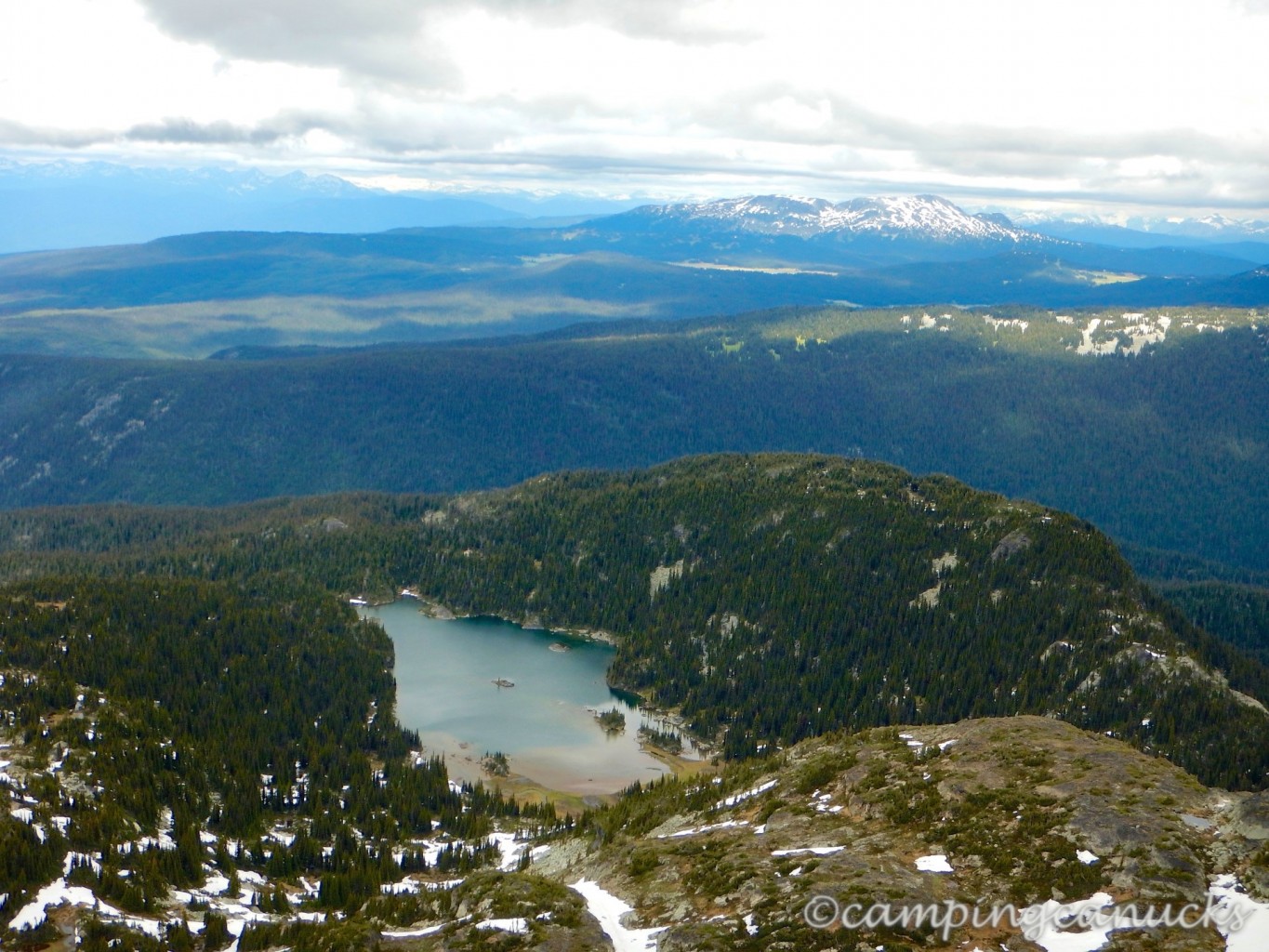 Needless to say, it was a much faster trip down than up and only took a couple of hours to get back to camp, with some pauses along the way to enjoy the sights. The rain started in earnest at this time as well so it was nice to get down where it was less windy. At camp, we were greeted by a duck that was just leisurely swimming away in the icy water of Sheila Lake. 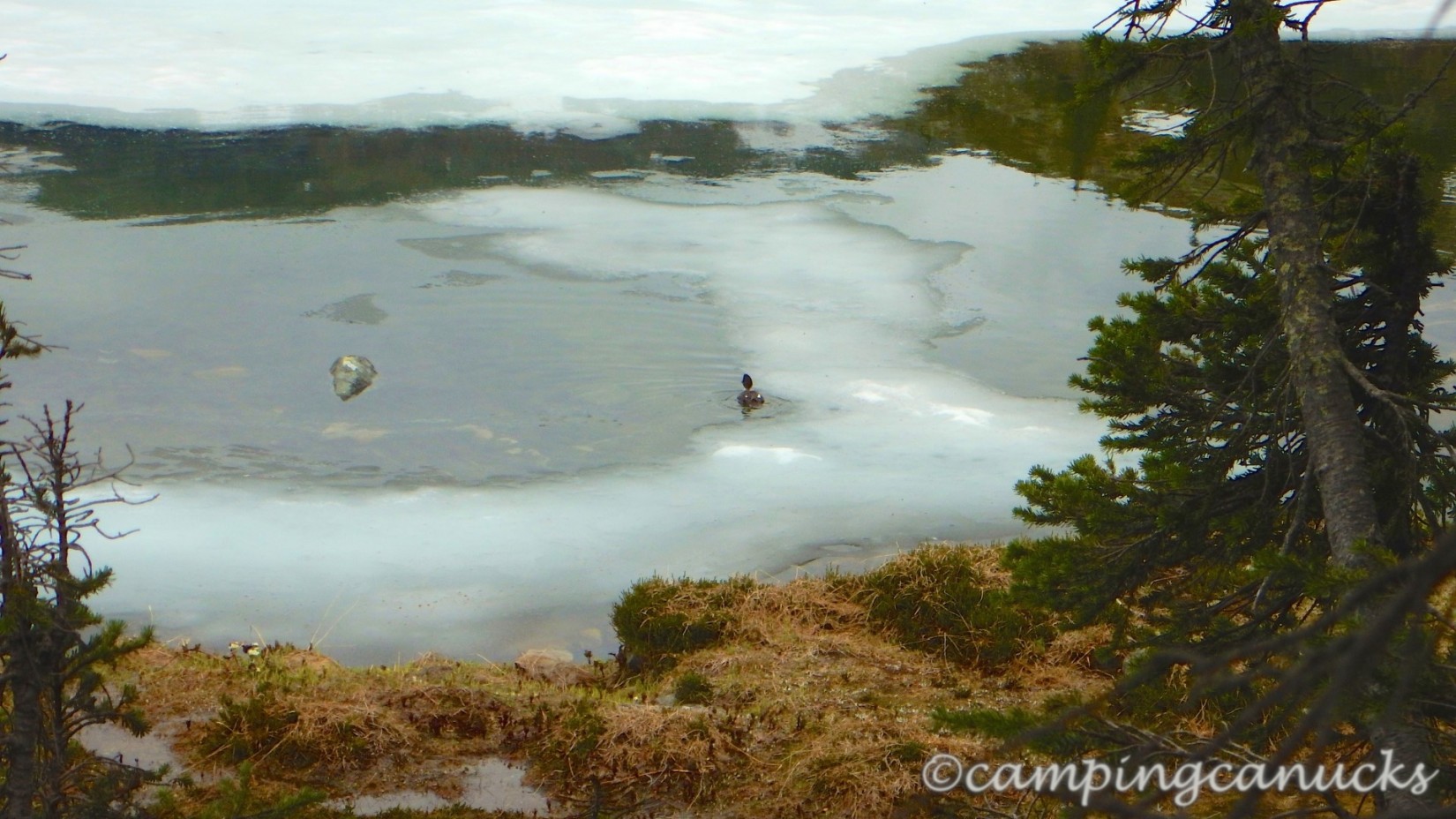 This is really a remarkable place and I really look forward to coming out again. I would likely come later in the season as it would be a bit easier to explore and get around without so much snow. Trophy Mountain itself would also be good for an ascent when it’s not socked in the clouds.

We decided to make another trip and camp at Sheila Lake with the intent of getting to the summit of Trophy Mountain in August. Unfortunately, the weather didn’t work out in a our favour and it rained for most of our first night. We awoke to lighter rain in the morning but the whole area was completely socked in. We hung around for a few hours hoping for a break in the weather but eventually decided to just pack up and call it a day. We’ll have to come back once again, hopefully on a clear day, and make another attempt for the top. 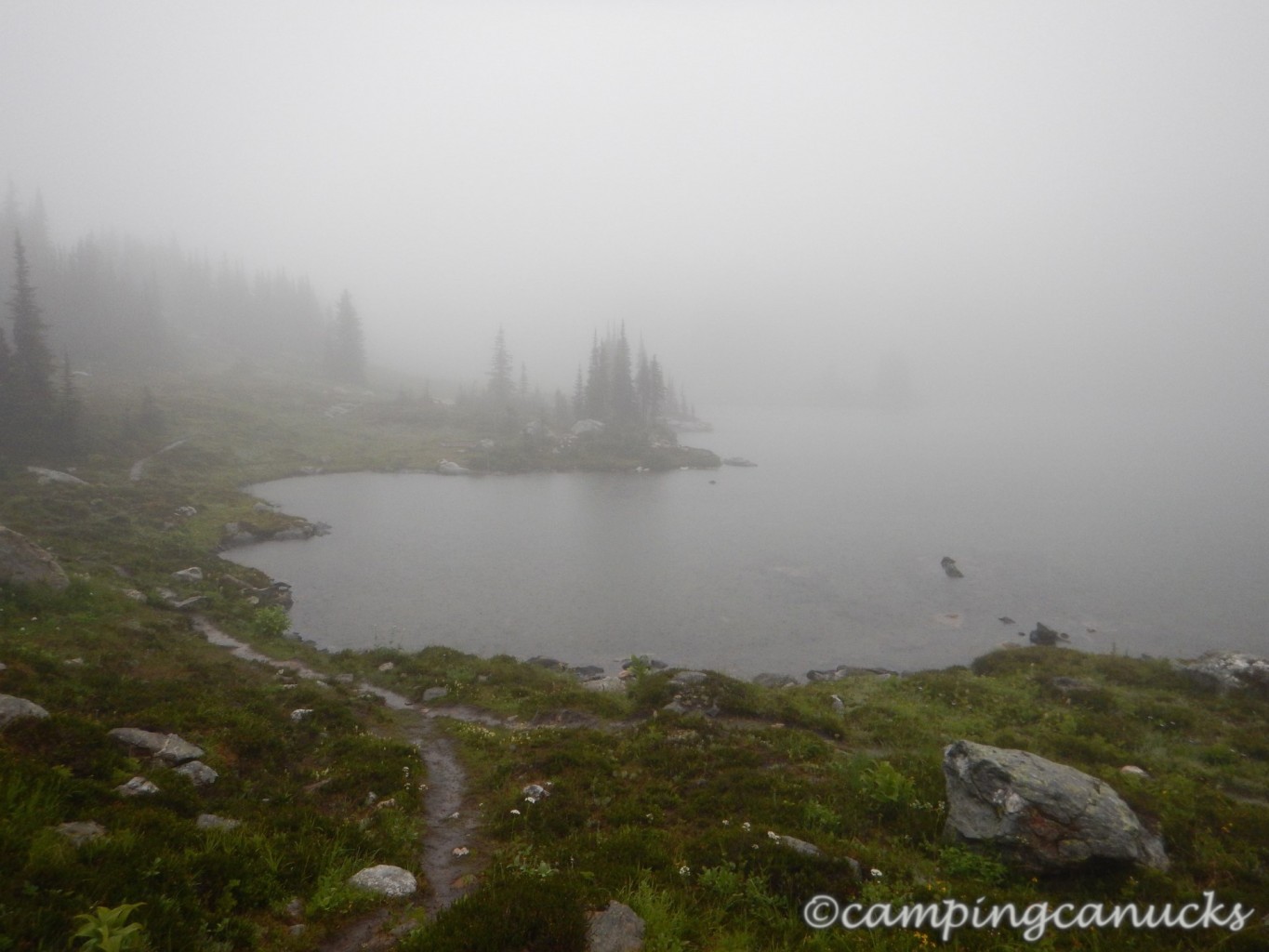 Sheila Lake in the clouds 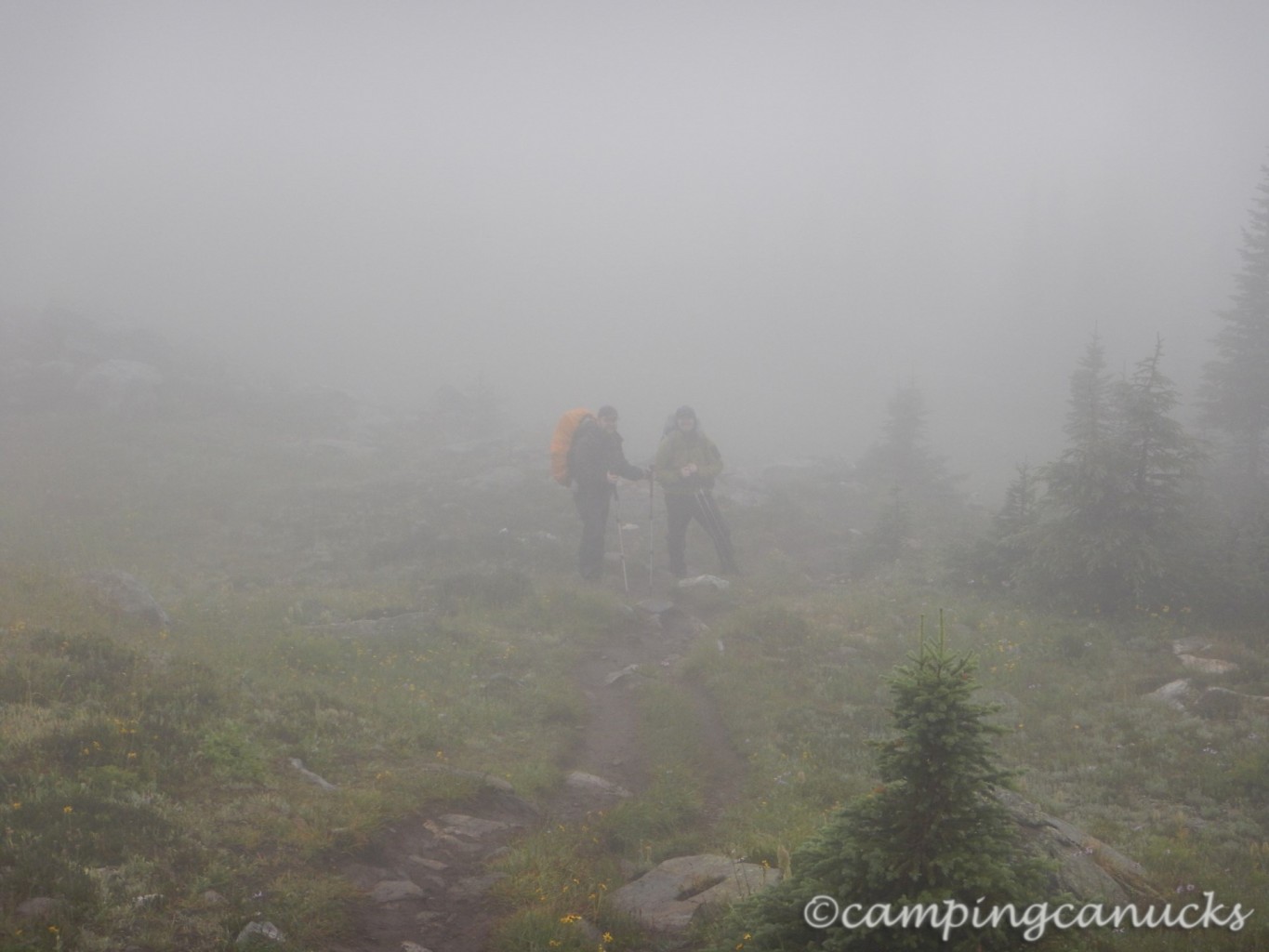