The lower Stein Valley trail in the Stein Valley Nlaka’pamux Heritage Park has been one of our go-to trails for years for shoulder season backpack trips. Its low elevation and mild climate means that you can access the trail for most, if not all, of the year. In fact, in 2015, I packed in for one night in the middle of February and there was plenty of evidence that people had already been up the valley even earlier in the year. On that trip we had only gone as far as the Teepee site but we encountered very little snow. You are no longer allowed to have fires at any time in the park.

While we wouldn’t consider the lower valley to be very remarkable, it is a relatively straightforward hike up to the many campsites that are available for anyone looking to get out to stretch the legs. The furthest we have gone is to the Ponderosa Camp and we did find there was considerably more deadfall and obstacles once we got by the suspension bridge (about 12km from the trailhead), but generally the trail is quite clear before the bridge.

One consideration, though, is to check the Lytton ferry status as it does shut down during periods of high water on the Fraser River during the spring months. You can drive around from Lilloett but it does make for a longer drive. Foot travellers can walk across a nearby bridge but it does add considerable time and distance to your day.

There is plenty of parking to be found right at the trailhead and it’s only a short distance before you start to enter the valley right down near the river. 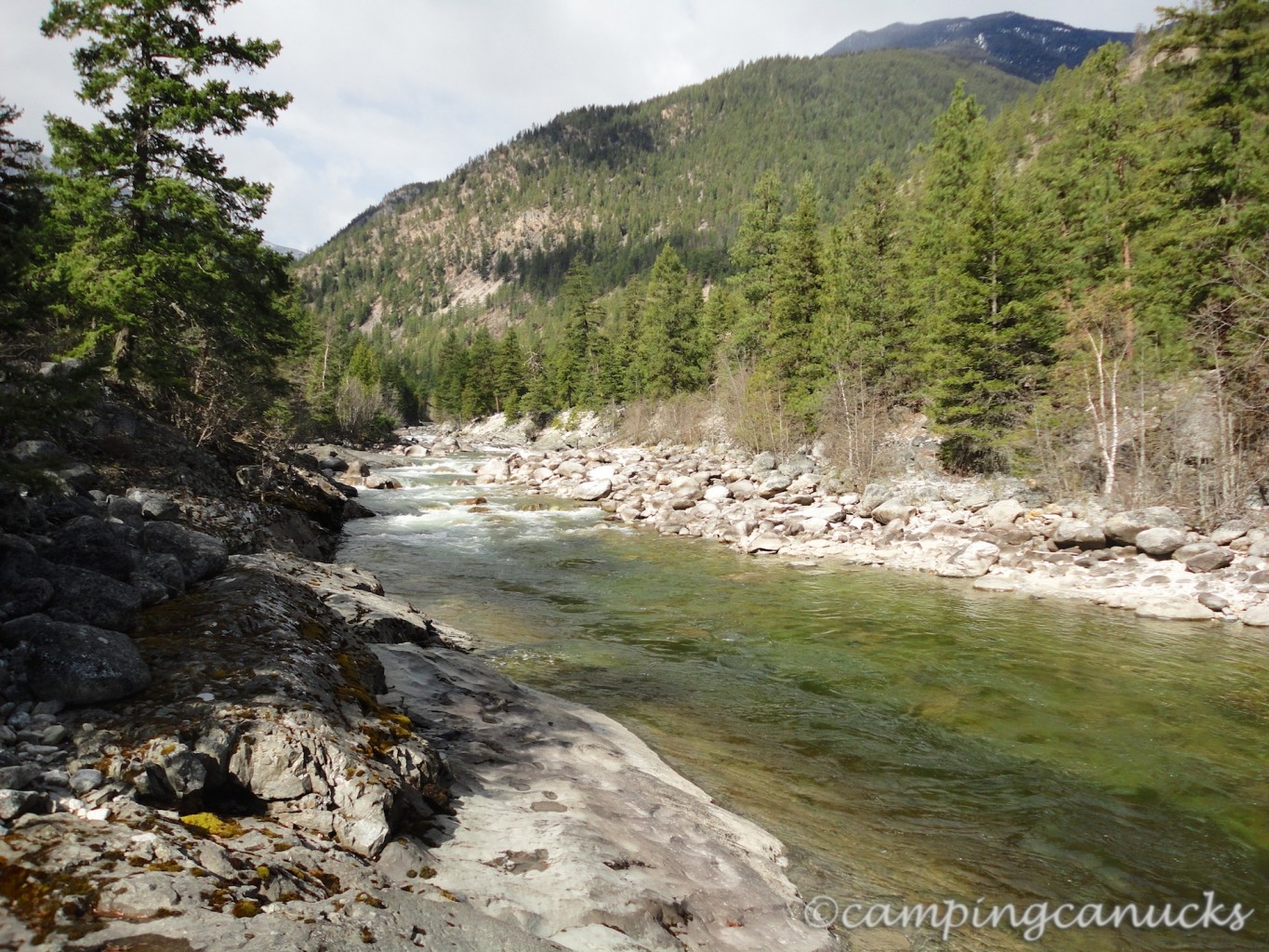 Lower part of the Stein River

The first couple of kilometers are easy going and it usually doesn’t take long to reach the first camp, Loop Camp. We have come in late on a Friday night several times to spend the night here before heading further up the valley. It’s nice and flat, with plenty of water and firewood to be found. After the camp, the trail does get a bit rougher but it isn’t until you reach the Devil’s Staircase that you begin any real ascents.

There is camp site at the Devil’s Staircase but we have never actually stayed there, although we have seen plenty of people use it as a base camp for hiking more of the valley without the need to lug along a large pack.

Even this part of the trail is quite easy but on my trip in February, we encountered a section that had been wiped out by a slide. It looked like a piece of the rock face above had slid off, leaving a path of destruction all the way down to river, necessitating a bit of scrambling across loose rock and shattered trees. 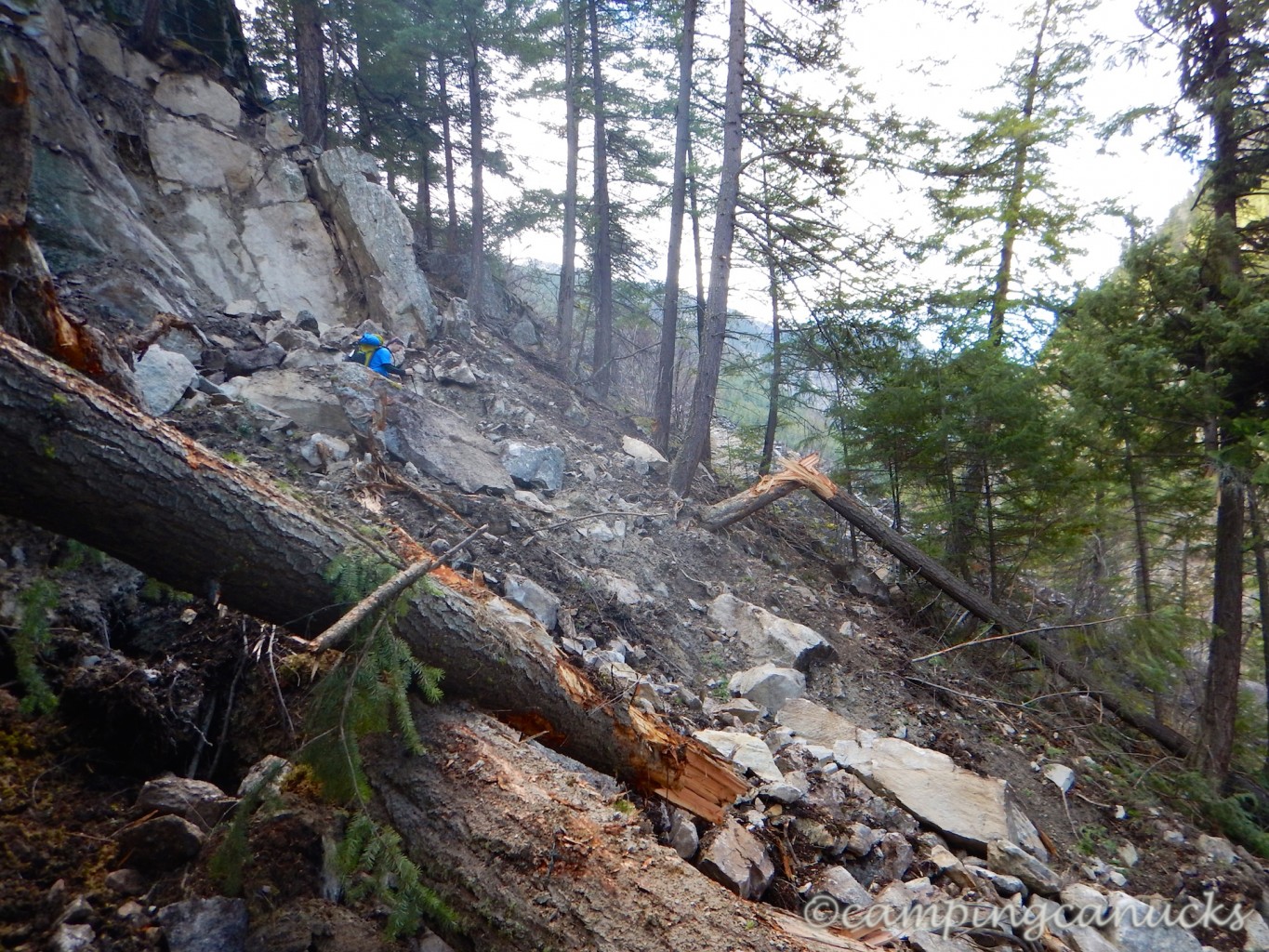 While the debris did not reach the camp below, if anyone had been staying there, it probably would have been one hell of a scare as this slide made its way down.

Once at the high point of the Staircase, the trails weaves up and down for the next couple of kilometers before descending near pictographs that have been painted on the cliff faces hundreds of years ago. 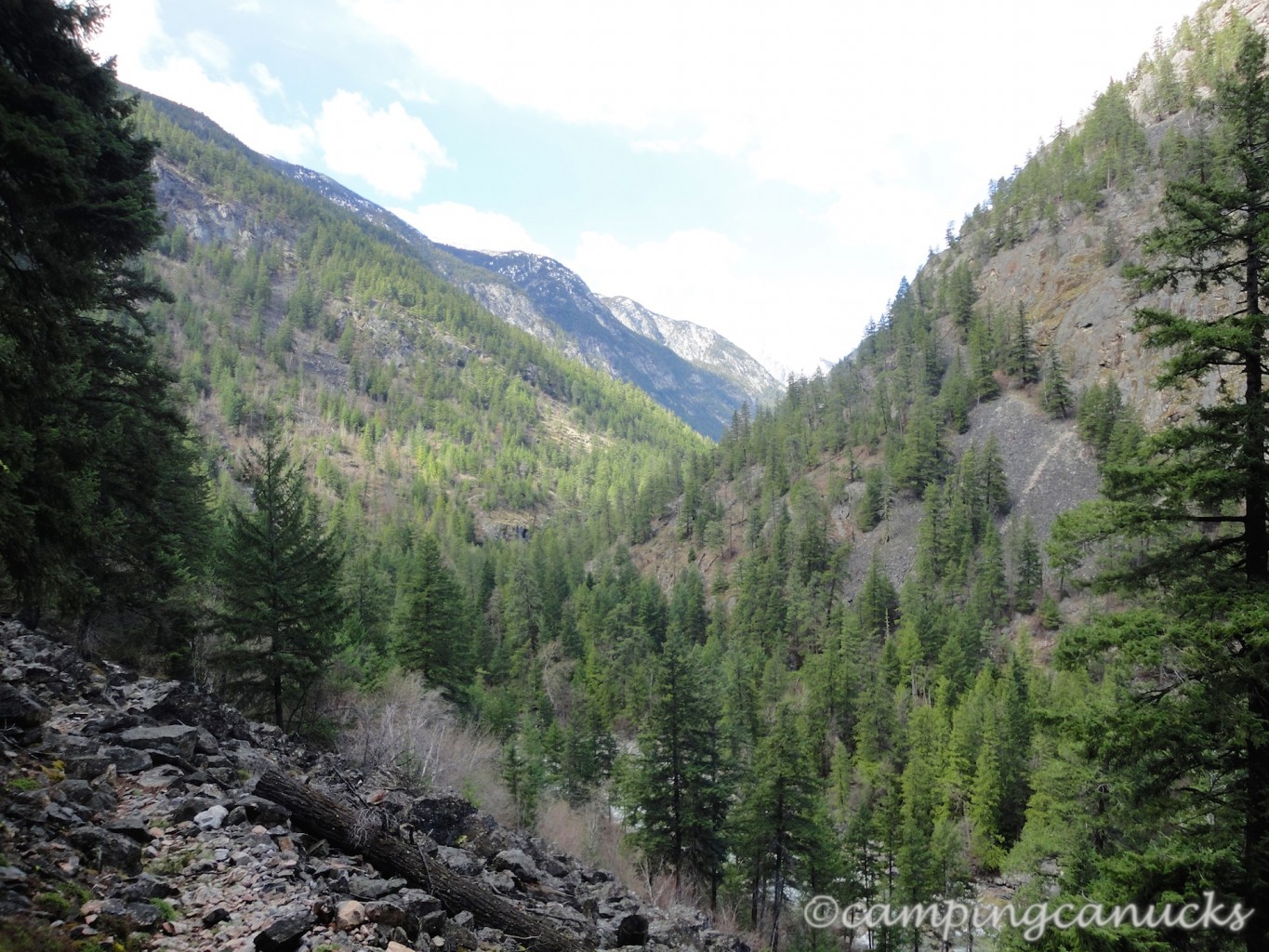 A view from the Staircase

It’s a short walk from the main trail over to the pictographs, which makes a relaxing place for a break. Sitting below the cliff face and the rocks, you can appreciate why the people before felt this was a spiritual and significant place. 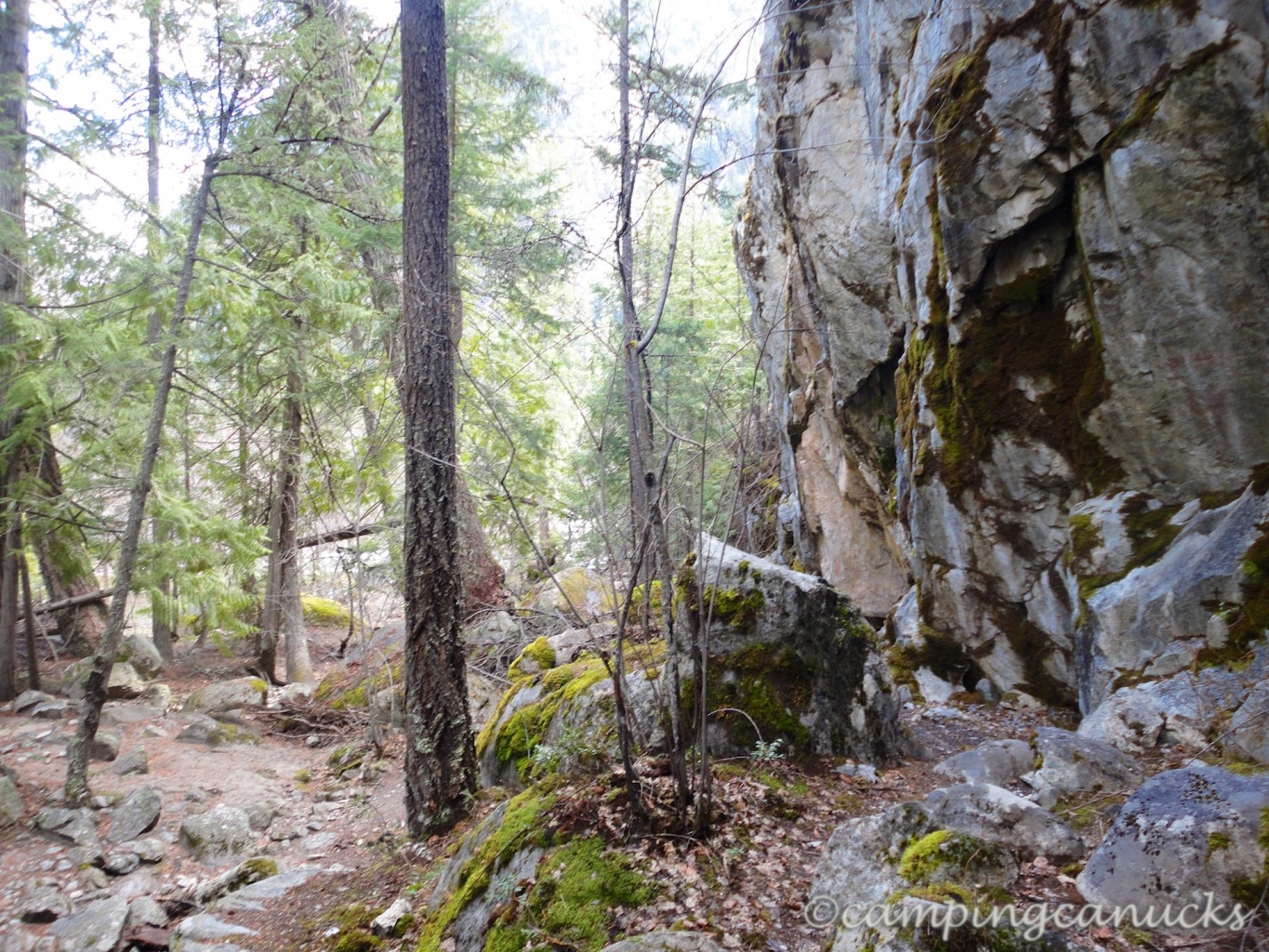 From this point, it’s only a few more kilometers to the next camp at the Teepee site; this is one of the more popular sites in the lower valley. As it’s a relatively easy trip to get to this point, a lot of new backpackers and groups end up here. It’s also a good place to base camp for day hiking further up the valley. 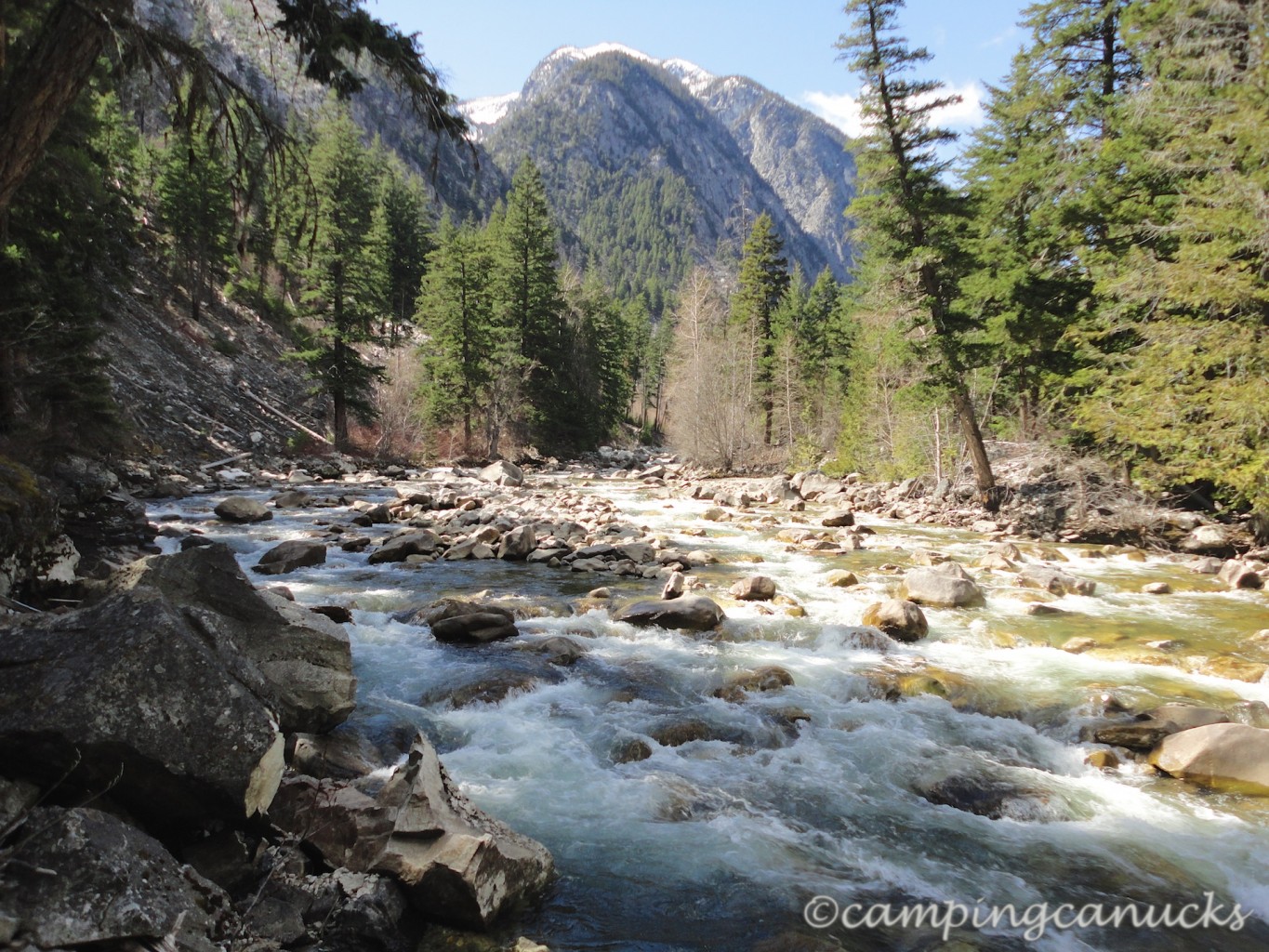 River view on the way to Teepee camp

There are several sites within close proximity of each other for the next six kilometers. The next one along the way is the Earl’s Creek site, so named because of an old cabin built by Earl for spending time out here hunting and trapping. This can also be a busy site and we have at times seen dozens of tent scattered around in the area. This is a nice and sheltered site, again with plenty of nearby wood and water. 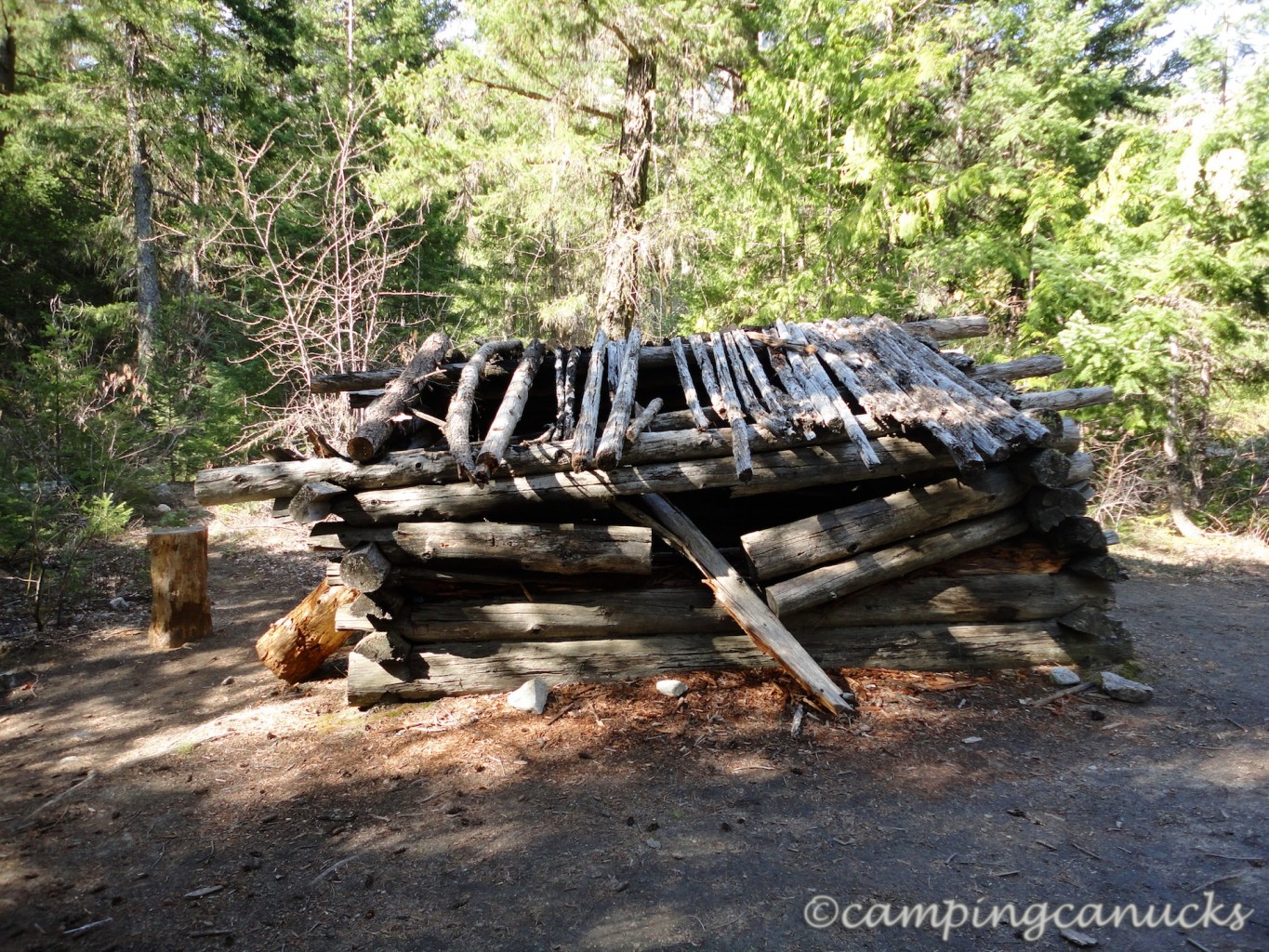 You can read about Earl on the sign at the trailhead.

The trail gets noticeably less used once you go beyond nearby Earl’s Creek. Not that it becomes more difficult but we find there does tend to be more brush and the like to get through as you continue past the creek. There are also some more slide paths to cross but nothing as significant as the Devil’s Staircase. 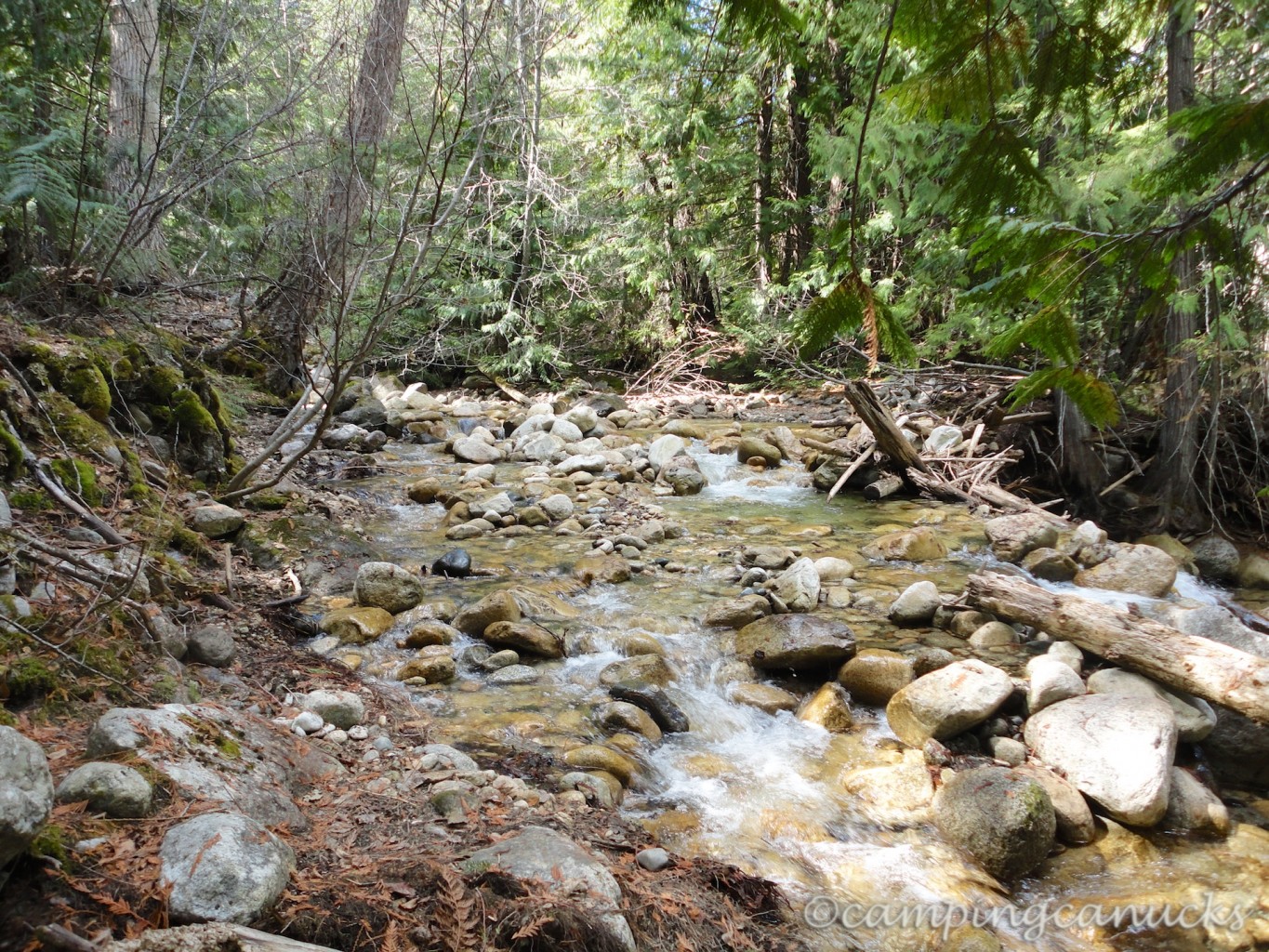 Three kilometers beyond Earl’s camp is the Suspension camp, which is one that we have often stayed at. It makes for a decent few hours of hiking to get here and tends to be a pretty quiet place to spend the night. Perhaps its distance from the river deters people. Or maybe it was the tree that used to lie across the outhouse.

A little ways past the camp, you come to the suspension bridge where you cross over to the north side of the river for most of the rest of the trip up the valley. In fact, I don’t think you cross back over until the cable car crossing near Snake Falls, which is a long way further along the trail and somewhere we have not yet been. 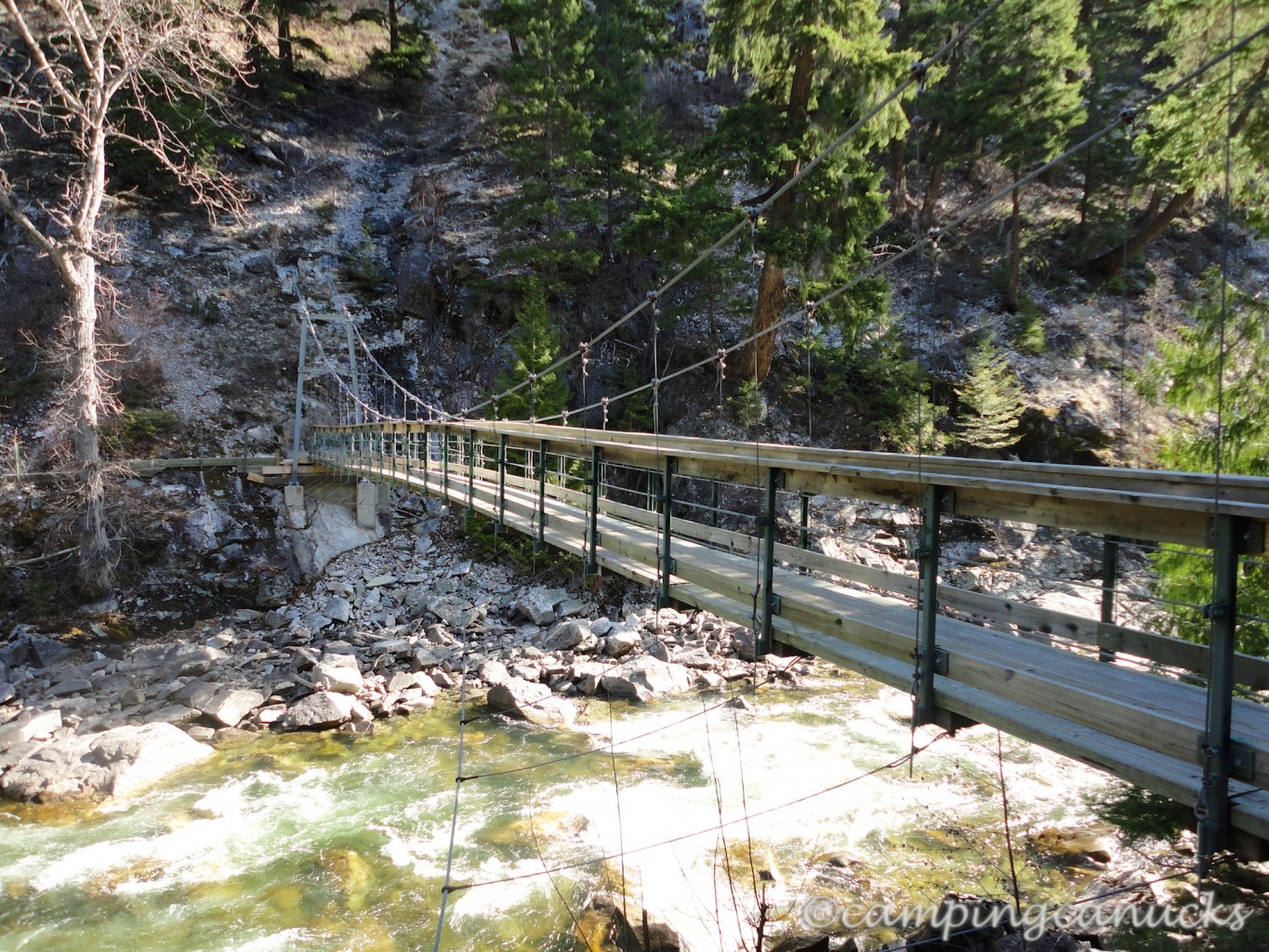 The bridge was recently repaired after being damaged by a rock slide.

We have continued on a couple of times all the way to Ponderosa Camp which is a few hours beyond the suspension bridge. We also have stayed at the Cottonwood camp between Ponderosa and Suspension camps but quite honestly, we found it to be quite a dark and gloomy site. Maybe it was the weather or just the early season with its early sunsets.

Venturing on, the trail can be a mixed bag. Most of the time, it’s fairly clear, but there was one trip where we were constantly crossing deadfall on the trail that had not yet been cleared off.

This part of the valley is really only scratching the surface of what the park has to offer, including two traverses, one coming in on Blowdown Pass and the other from Lizzie Lake. We have read other trip reports of groups doing them but we have not yet done so ourselves. We are looking to do Blowdown Pass this year if time permits but it’s likely we won’t traverse and exit the lower Stein Valley but do an in and out trip to keep up in the alpine areas of the park. Lizzie Lake,  though, is a whole new challenge as the only road to it was washed out years ago and groups now need to make their way all the way up from Lilloett Lake along a forest service road. It’s on the list although it’s quite possible it’ll be a few years before we get to that one.

So for anyone looking for somewhat easy backpack or a shoulder season trip with minimum snow, the Stein Valley is a pretty good place to go. We don’t go as often as we used to but it’s still a nice place to do an overnighter when the mood strikes.