We’ve driven by Marble Canyon Provincial Park and Pavilion Lake many times over the years while travelling along Highway 99 and a couple of things that have always caught our eye is how clean and clear the lake is, and the NASA trailer that sat beside it for years. It turns out the NASA trailer was part of their Pavilion Lake Research Project, where they were studying freshwater microbialites on the bottom of the lake. For ourselves, since we’re not divers, we figured we’d just like to paddle the lake since it’s so beautiful. While the lake is very clear and nice to paddle on, it is by no means quiet since there are a lot of waterfront cabins and the highway nearby. It sort of takes away from the experience having to listen to lawnmowers and motorbikes from across the lake.

We picked Canada Day to canoe on Pavilion Lake as it seemed to be a good day for the quintessential Canadian experience of paddling, but the weather didn’t start off very well for us being that it was a somewhat rainy and gloomy morning. Due to the number of private homes on the lake, it took us a bit of driving around before we found the public launches and put in to begin the paddle around the circumference of the lake. 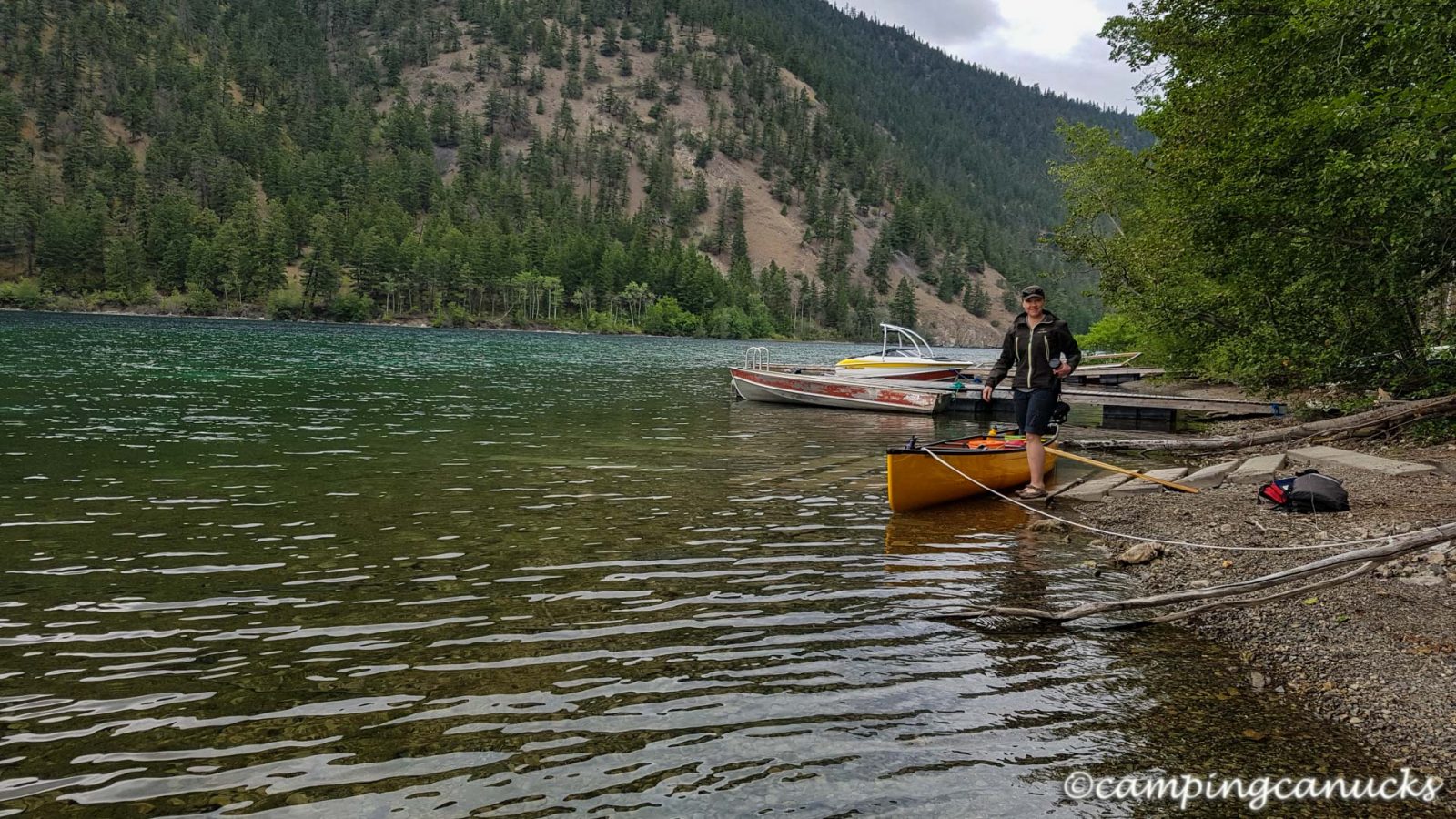 Getting ready to set off

We headed for the north end of the lake once we were on our way and just enjoyed a leisurely pace. It was still pretty quiet at this time of day and it almost felt like we had the lake to ourselves. Occasionally, however, a loud truck or motorbike would go ripping by on the highway and shatter any illusion of calm that we had. 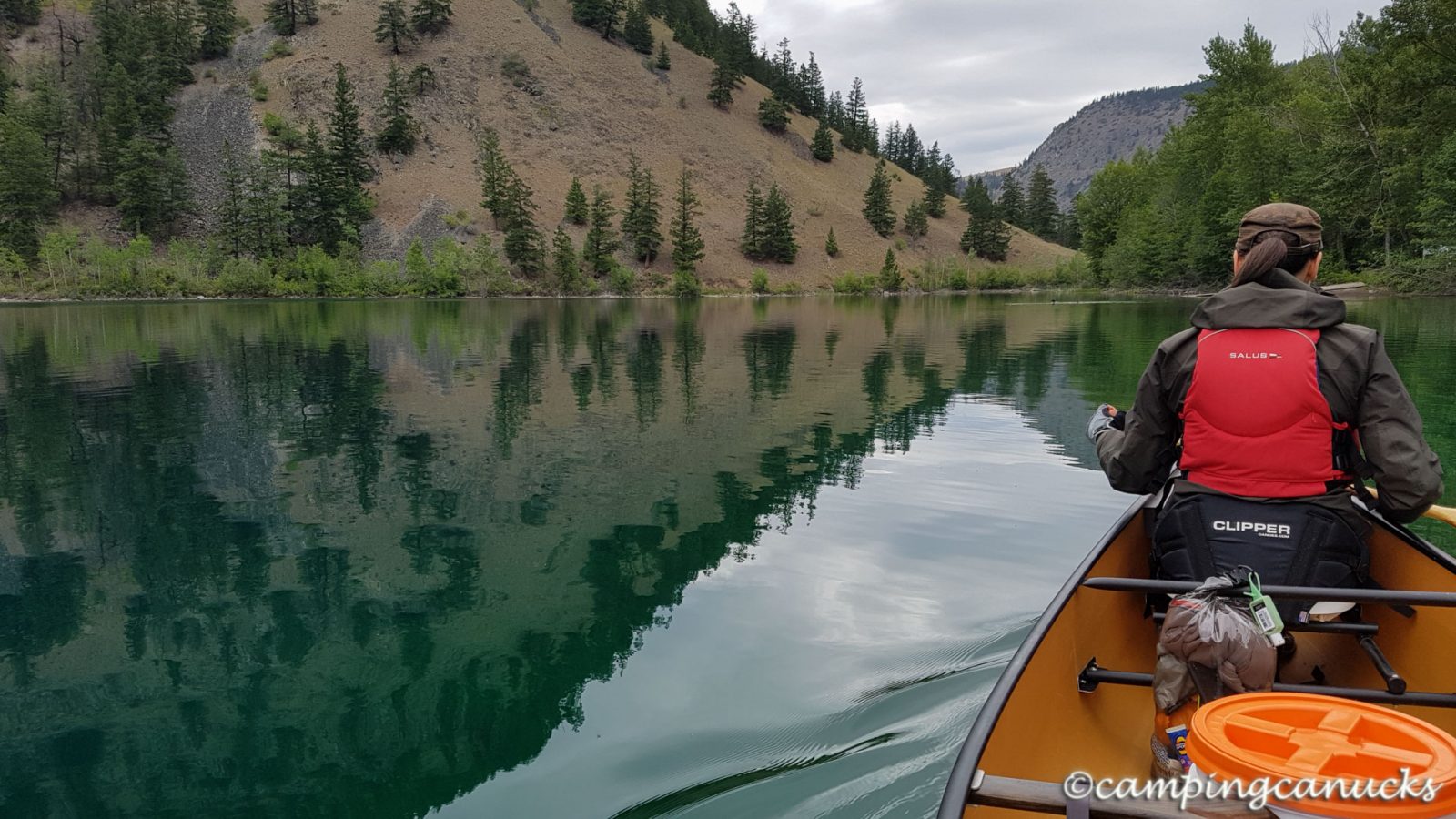 Approaching the north end of the lake

Regardless, we enjoyed the clear waters and watching the ducks and loons with their young ones in tow avoid us if we paddled too close as we looped around the north end. Once at the end, we worked our way down the western side of the lake where there are far fewer homes. 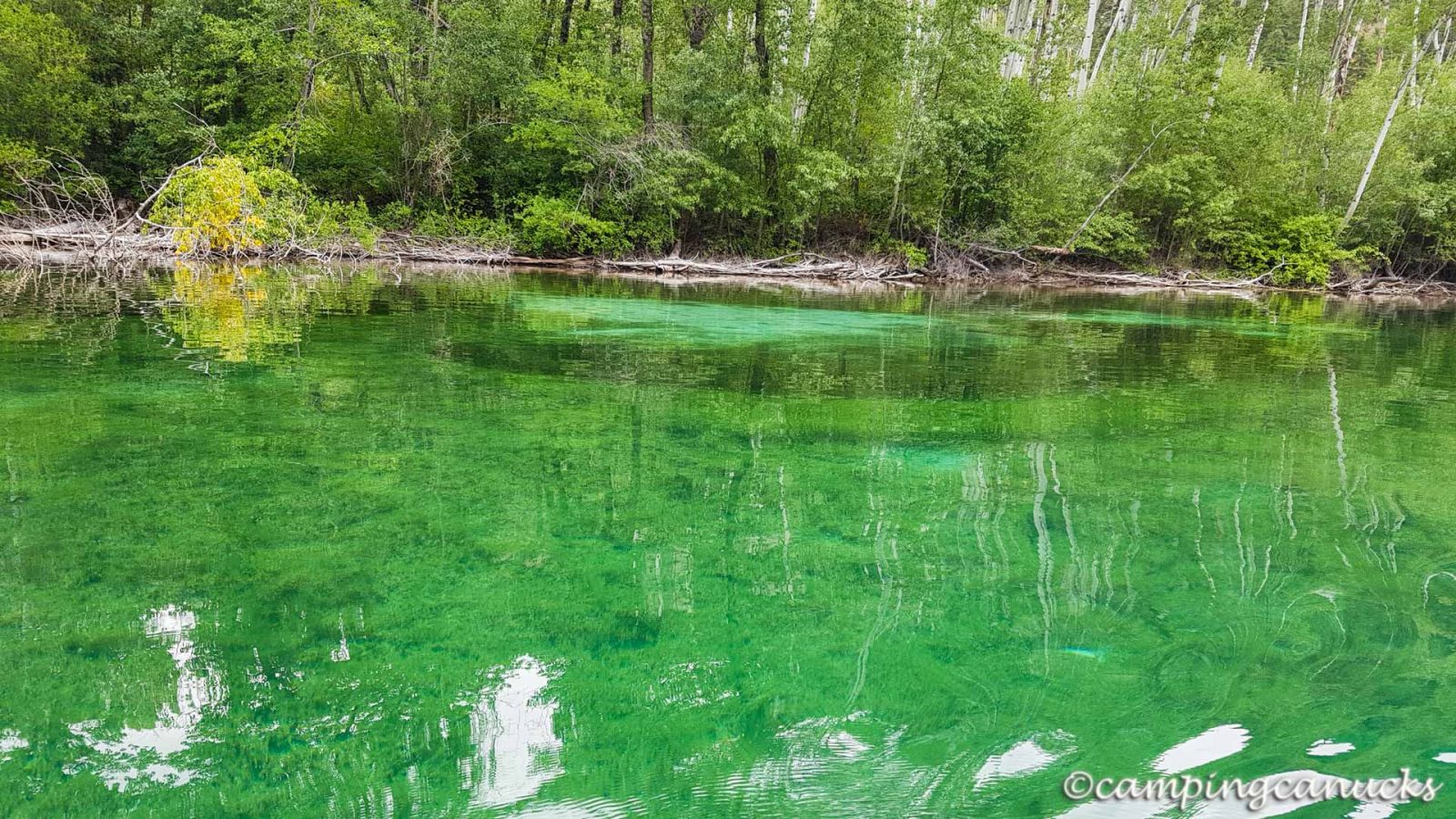 The clear water of the lake

This lead us past some bluffs which looked to be a great place for swimmers to jump off into the lake. 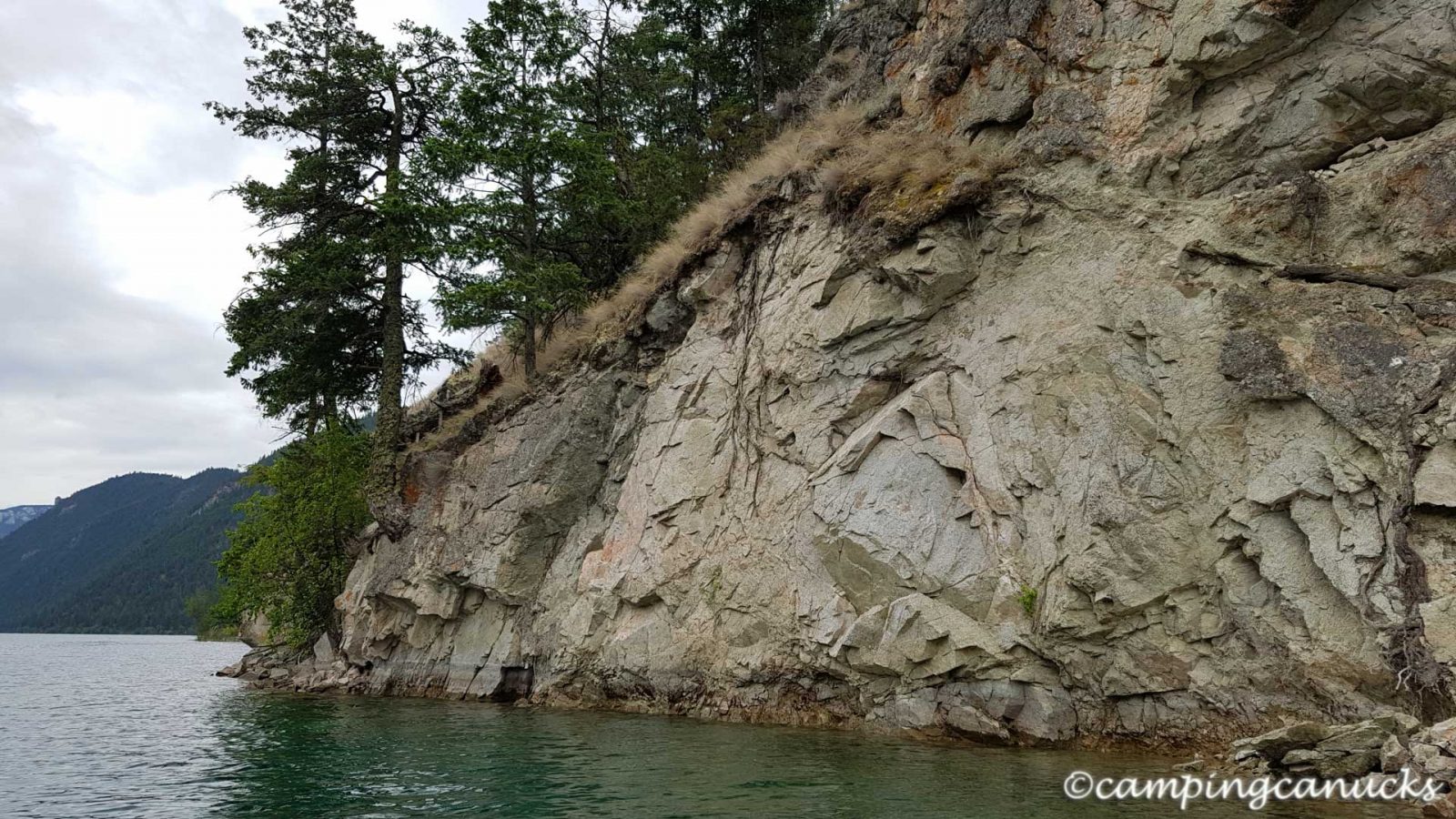 There were not a lot of places to stop but we did find a sandy beach a little ways beyond the bluff where we could take a quick break and stretch the legs.

Paddling along down to the southern end, the view is dominated by the large cliff faces that loom over the highway and the lake. We could see some of the routes that climbers take up and it was a fun game to guess what it would be like to climb up to the top. We have since done a little bit of climbing and exploring some of the different routes on the cliffs and expect that one day we’ll make an attempt for the top. 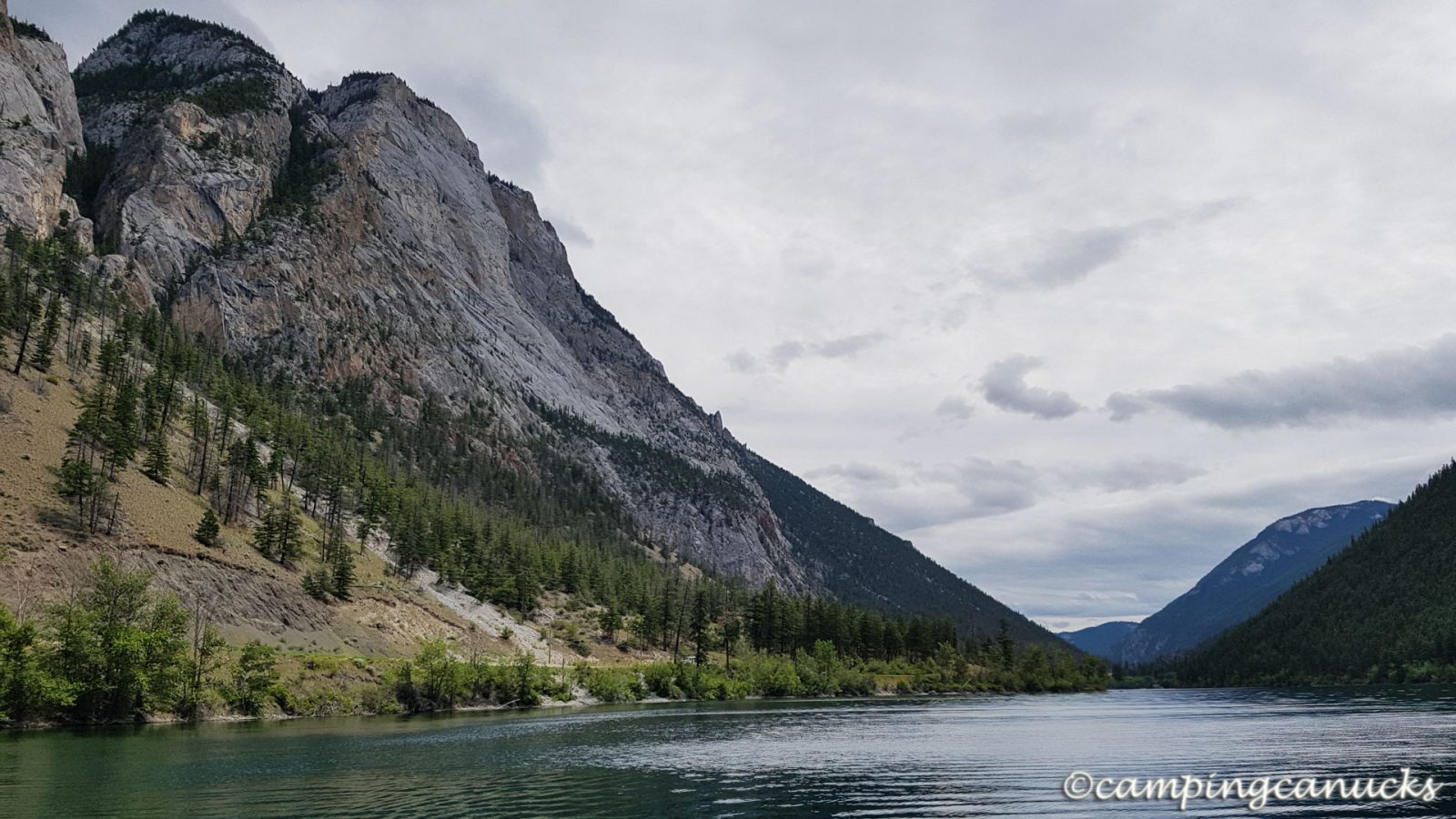 About halfway down, we passed the only private cabin on the western side and decided to find a place for a lunch break. Having brought along our portable stove and some soup, we were happy to take a break and relax on a little sandy stretch of beach we came across.

At this time, the day was getting sunnier so we were able to strip off our rain jackets and enjoy the heat. It was nice at this time as we had the sun at our backs as we paddled our way back to the north end. 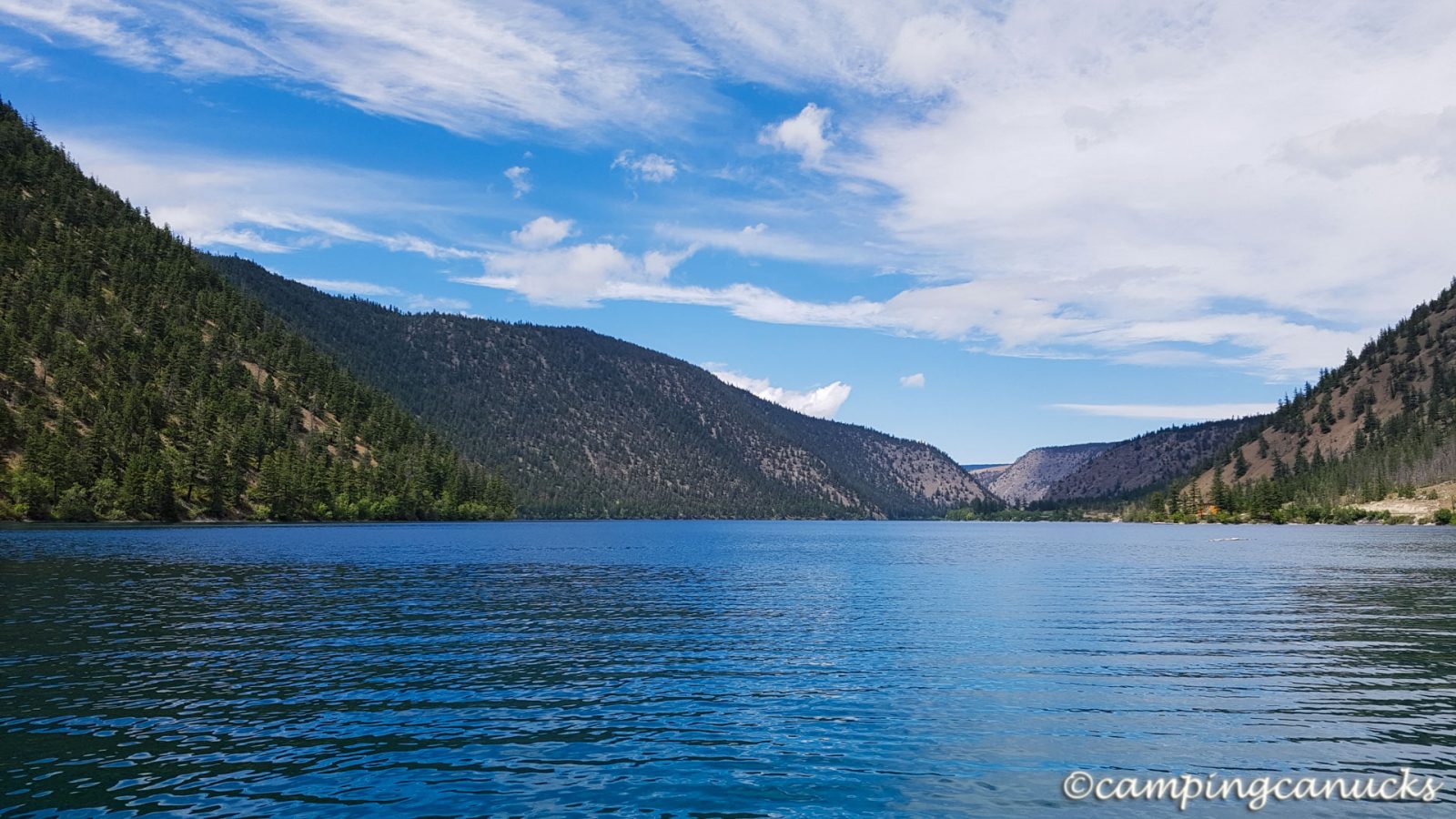 The weather takes a turn for the better

Weaving along the eastern shore took us around the only island on the lake, which is private property, so unfortunately people can’t stop and check it out. 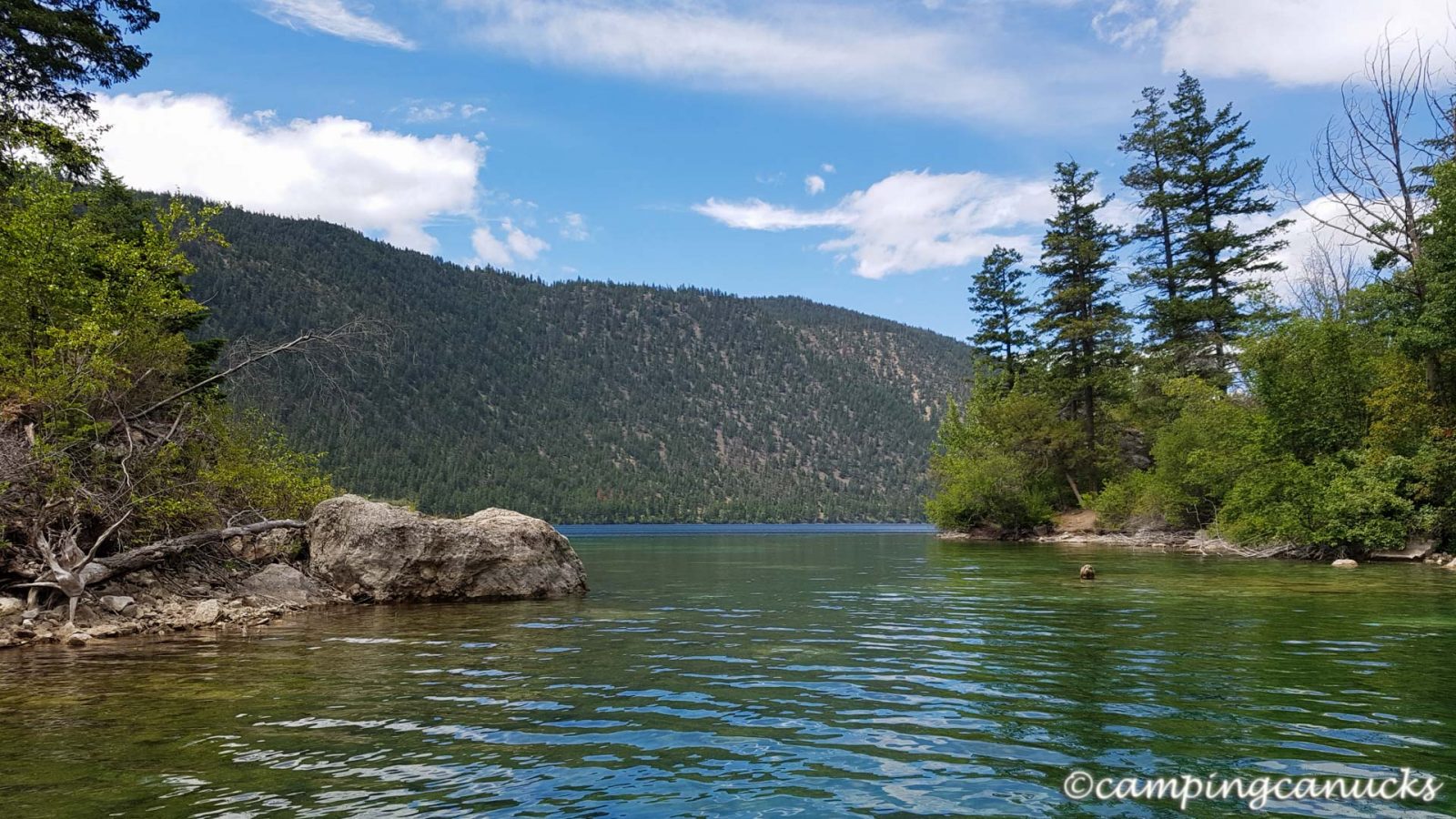 The channel around the island

It didn’t take us long to paddle back to the boat launch, where we found many more people coming out to the water to fish or swim as the weather had improved. All said, we had paddled around the lake in less than four hours and that was a stretch since we were not in any particular rush.

Pavilion Lake is a beautiful lake to paddle on and we would recommend it for anyone looking for a small lake close to Kamloops for a few hours worth of paddling. Its proximity to the highway and with many cabins along the eastern shore does mean that it’s certainly not a quiet place to paddle at times. There were also a lot of powerboats moored at the cabins but luckily for us, only a few were on the lake that day.

That said, enjoy Pavilion Lake. It’s truly one of the prettiest lakes to paddle on in the region.