In September 2014, we decided to backpack the Berg Lake Trail in Mount Robson Provincial park. I had been up that way once before in 2010 as detailed in this post but this was Raegan’s first time. On the previous trip, Kirk and I had then planned for three days and two nights; spending one night at the Whitehorn camp and the second at Berg Lake camp. This time, we decided to go all the way to the Berg Lake camp in one day and spend three nights up there before returning on the fourth day. This would give us two full days to do the Robson Pass hike and the Hargreaves Glacier/Mumm Basin route. Unfortunately for us, the weather did not cooperate as we were to find out.

After spending the night at the nearby Robson Meadows campground, we got an early start on a sunny and warm morning. Being that the trip to Berg camp is 22km, we wanted an early start as we weren’t sure how long it was going to take to get there. We estimated five hours or so but we were not in any particular rush and intended to take it relatively easy with lunch and snack stops along the way.

The first part of the trip passed quickly on our way to Kinney Lake as it’s a well maintained road/double wide track on which we made good time. We actually were passed by several rangers in a truck heading up to fix some bridges and do some trail maintenance whom we jokingly asked for a ride to Kinney Lake. Upon reaching the lake, we took a quick break and enjoyed the warm late summer sun before continuing on our way. 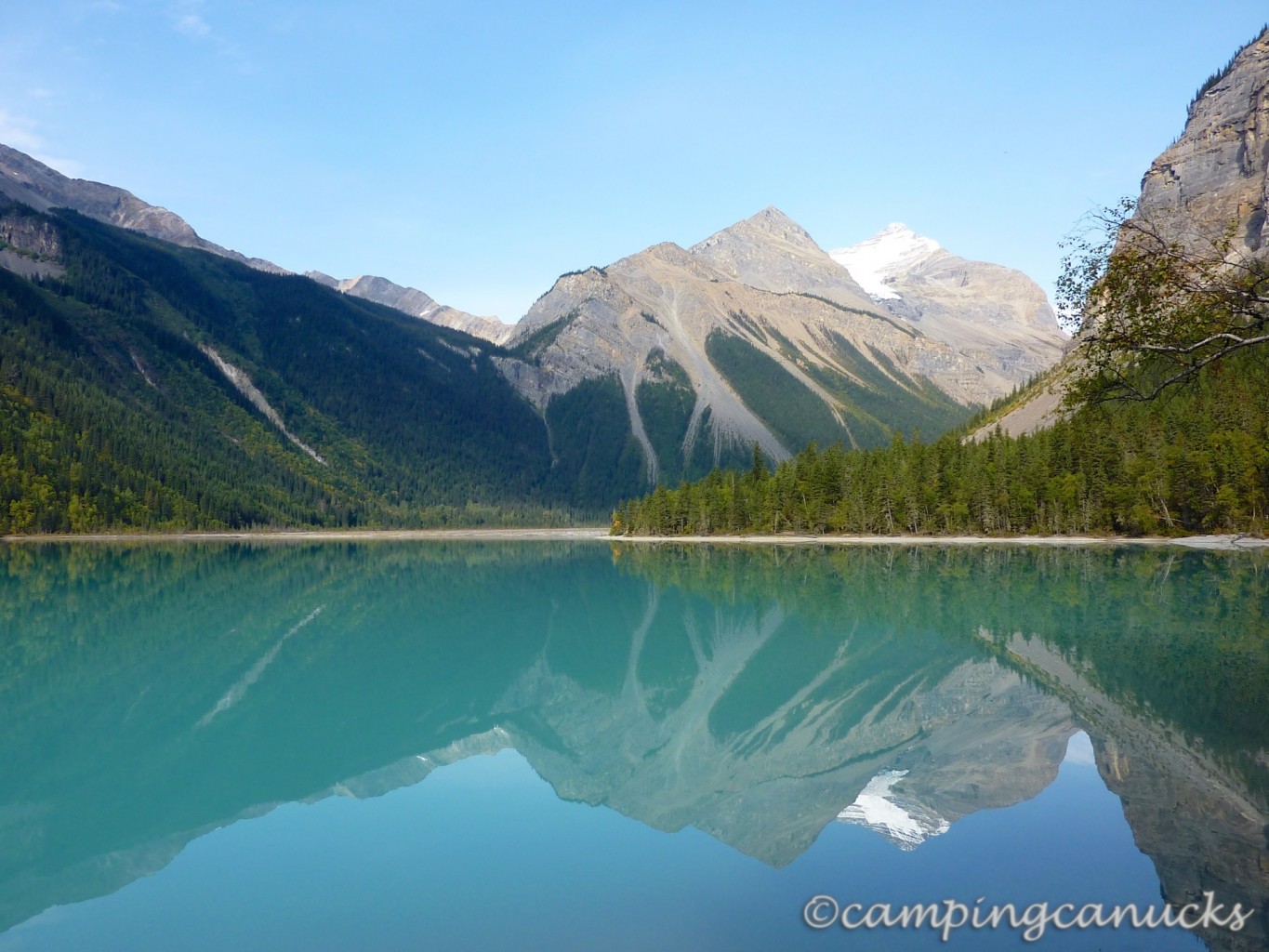 To save some time and distance, we followed the Kinney Flats route to the end of the valley. This route is usually only available during periods of low water, otherwise people have to take the longer trail through the trees. 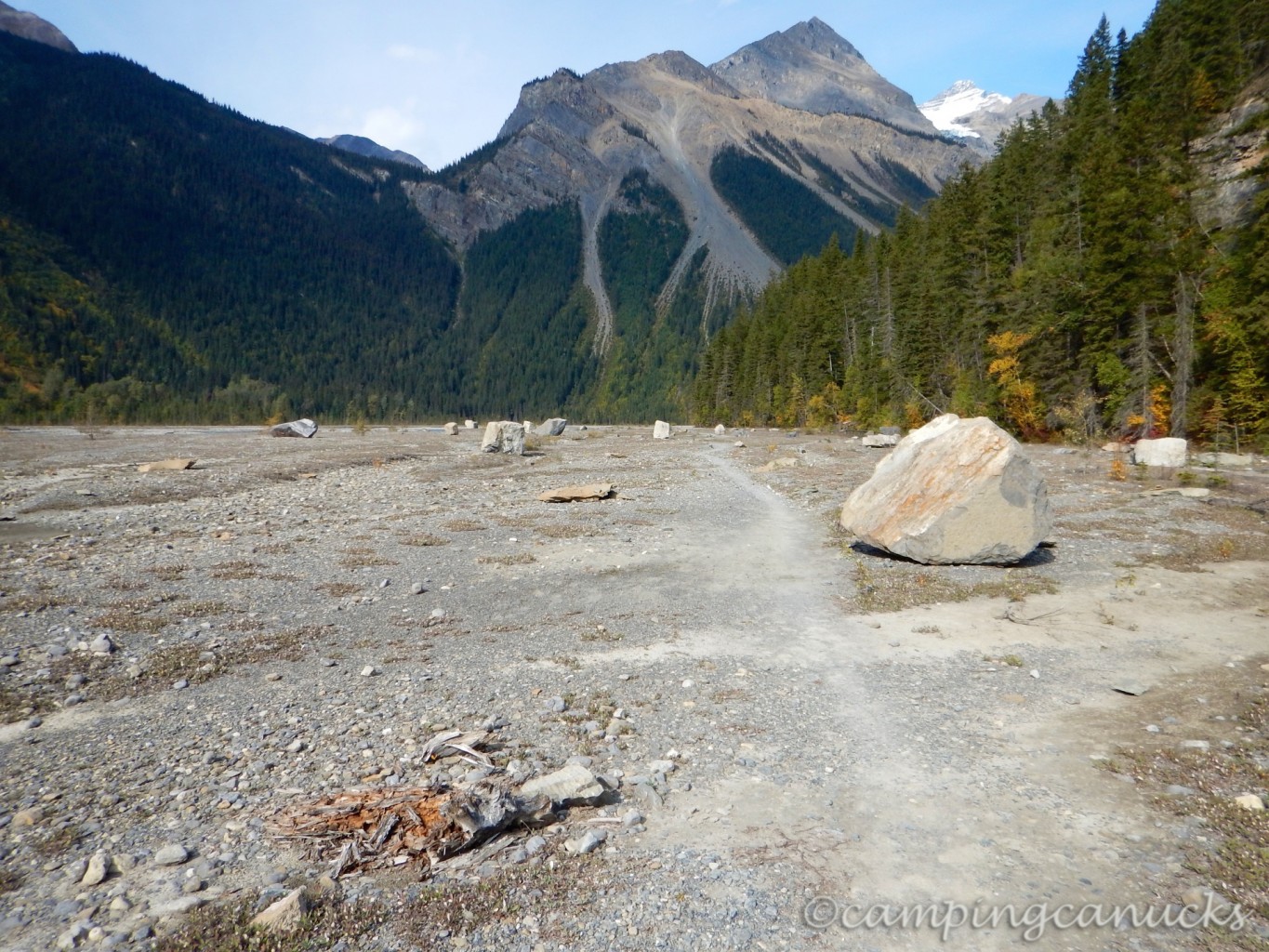 Once past the flats, we began the climb to the Valley of a Thousand Falls. This is a somewhat unremarkable stretch until you reach the valley and the views start to open up. We stopped here for a lunch break for a bit and got ready to hit the hardest stretch of the trail that leads past several falls and Emperor Falls. This section has some pretty steep parts and will definitely test your cardio, especially when carrying a heavy backpack. It’s also one part that is much better to do when it is not blazingly hot out as there is no water to be found until you get to the top. 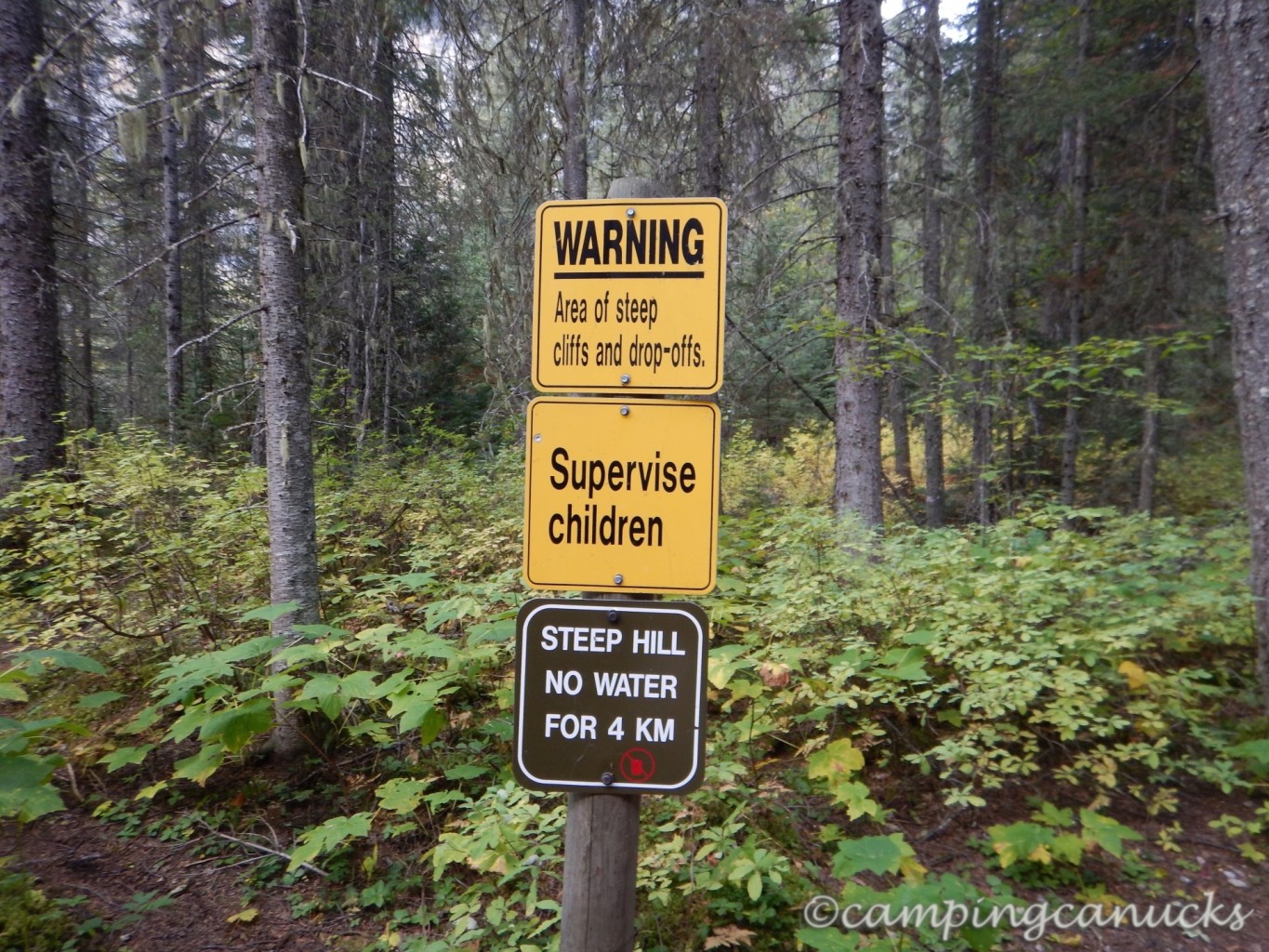 You have been warned!

Once you reach the top, it’s a pretty easy jaunt past the Mumm campsite on towards the Berg Lake site. This is also where you start to get some great views of Rearguard Mountain and the Berg Glacier.

Arriving the Berg Lake site, we found there were not a lot of people camping so we had a good selection of tent pads to choose from. Once we settled on  a nicely covered site, we setup the tent, threw the tarp over the pad for some extra coverage and moved all of our food and cooking gear down to the shelter. 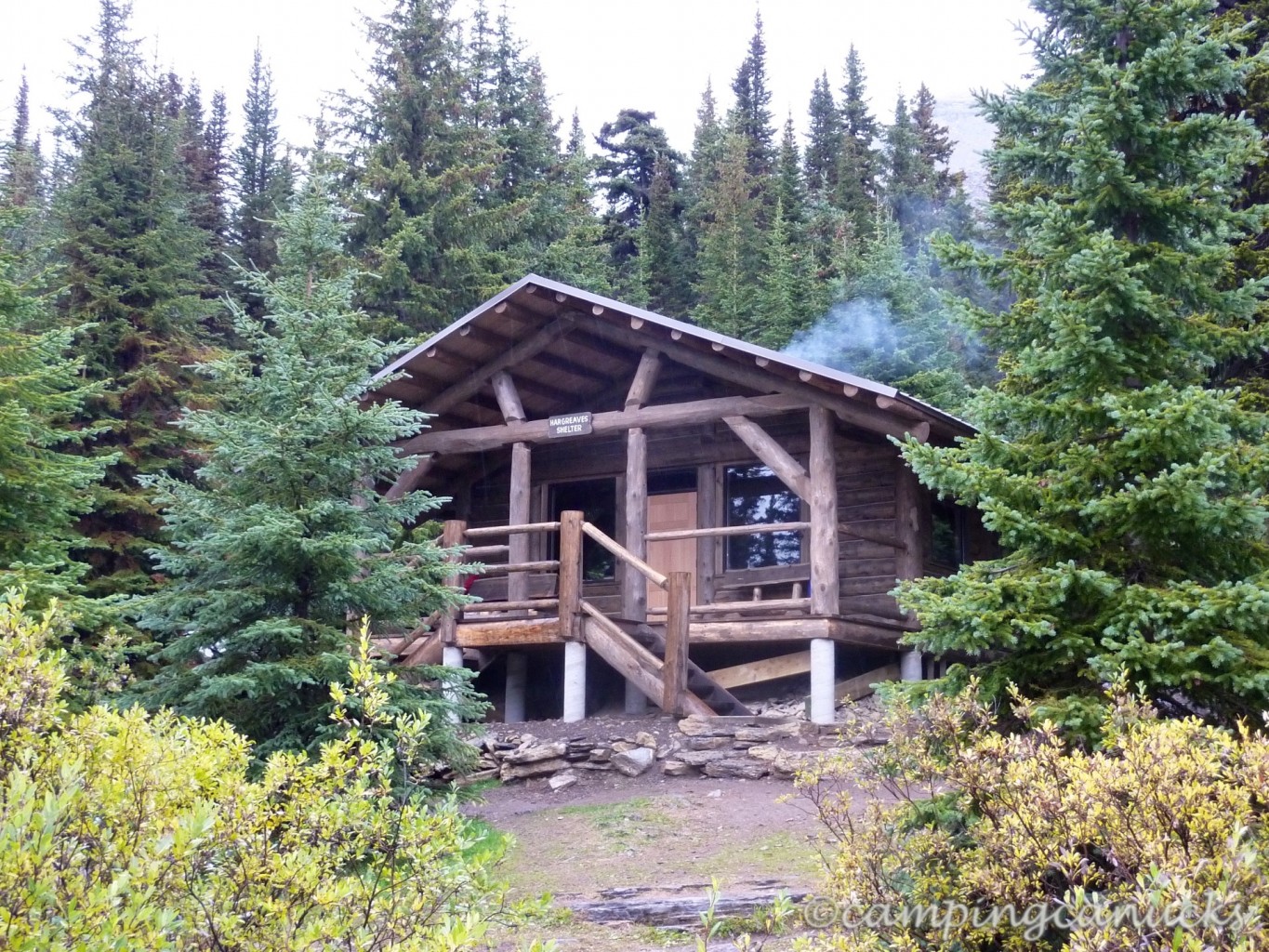 One nice bonus this year was that the Hargreaves Shelter has been rebuilt pretty well from the ground up. Supposedly a rat or several rats had taken over the shelter over the last winter and had thoroughly destroyed the interior of the shelter which necessitated tearing down the old shelter rather than just trying to clean it up. It was probably long overdue. While the old shelter was nice, the new one is definitely much nicer and is much brighter due to larger windows and more lightly coloured wood being used inside. In addition, there is a new stove and more tables.

This shelter does make the Berg Lake campsite the busiest one along this trail but in bad weather, it is a real luxury to have a warm and dry shelter to spend your time in. With large piles of wood nearby, we chopped a bunch up and more or less kept the fire going for the next three days. The shelter became our home for most of the time as the weather took a bad turn and it rained most of the time.

We had planned on doing a different hike each day but we found on day two that there was really no point going anywhere. By this point, it was just pouring out and the entire valley was socked in with clouds. There really is no reason to hike to an alpine viewpoint in  the fog if there is nothing to see. Not to mention, it gets a bit dangerous scrambling around in the alpine if all the surfaces are wet and slippery. A couple of the things we always bring along are a crib board and a deck of cards so we just hung around in the shelter and played games and read most of the day. There was a diverse group of people from Germany, Belgium, France, and other countries so we also spent a lot of time just chatting and getting to know each other. Everyone had the same idea of just hanging out and staying dry and it was a great and friendly atmosphere to pass the day to.

On the third day, the weather had improved somewhat. We mulled over whether to head for Robson Pass or do the Mumm Basin hike. We settled on the Mumm Basin in case the weather turned as we would be much closer to camp and it would be an easier trip back in cloudy and foggy conditions. It was also somewhat cold and we wouldn’t have been surprised if it started to snow on us.

Our approach for this hike was to head back to the Mumm campsite and make our way up to the Hargreaves Glacier from there. This is a relatively short but steep hike that brings you to Hargreaves Lake where you can decide to continue on towards the glacier or head east towards Mumm Basin. 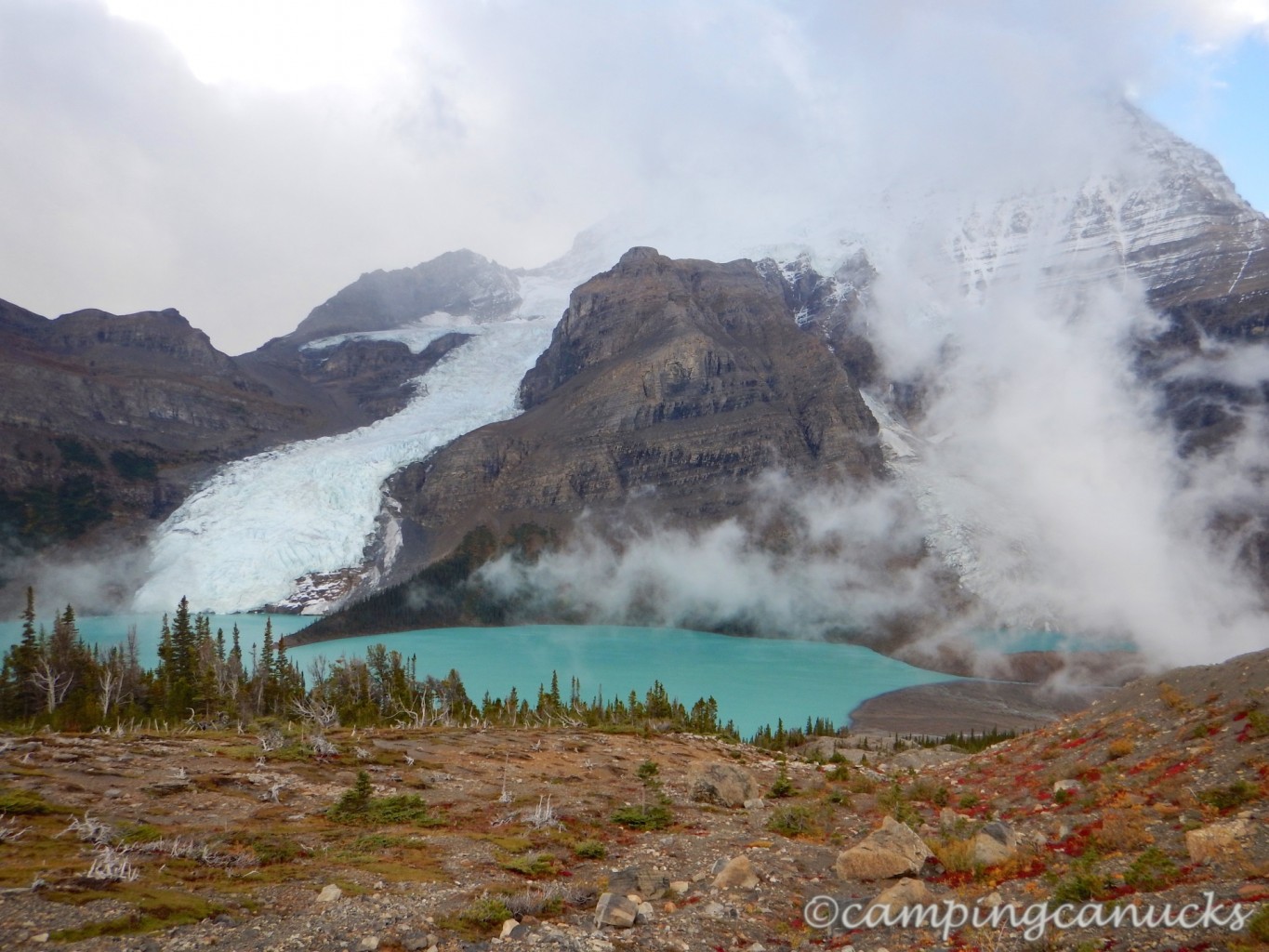 It was a cold and somewhat wet trip up the trail. Rain clouds kept passing through and occasionally we got hammered by some heavy rains and pushed along by some strong winds. 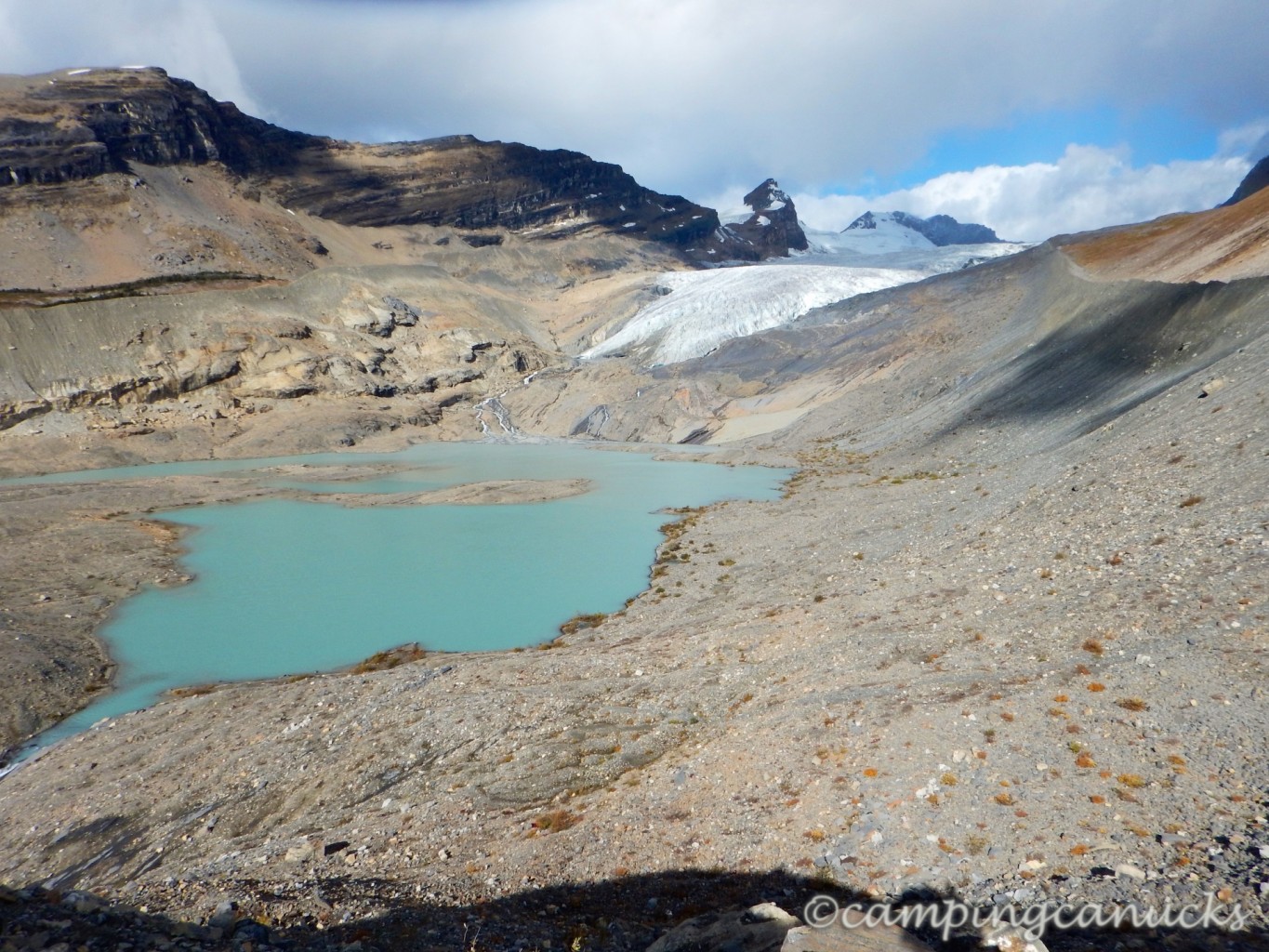 At this point we split up, with Kirk and I continuing upwards towards the head of the glacier and Raegan making her way towards Mumm Basin. It was a rugged hike but we managed to make good time as we found we had to move fast as it was quite cold with the winds blowing. We would cool off quickly each time we stopped so we didn’t really linger. 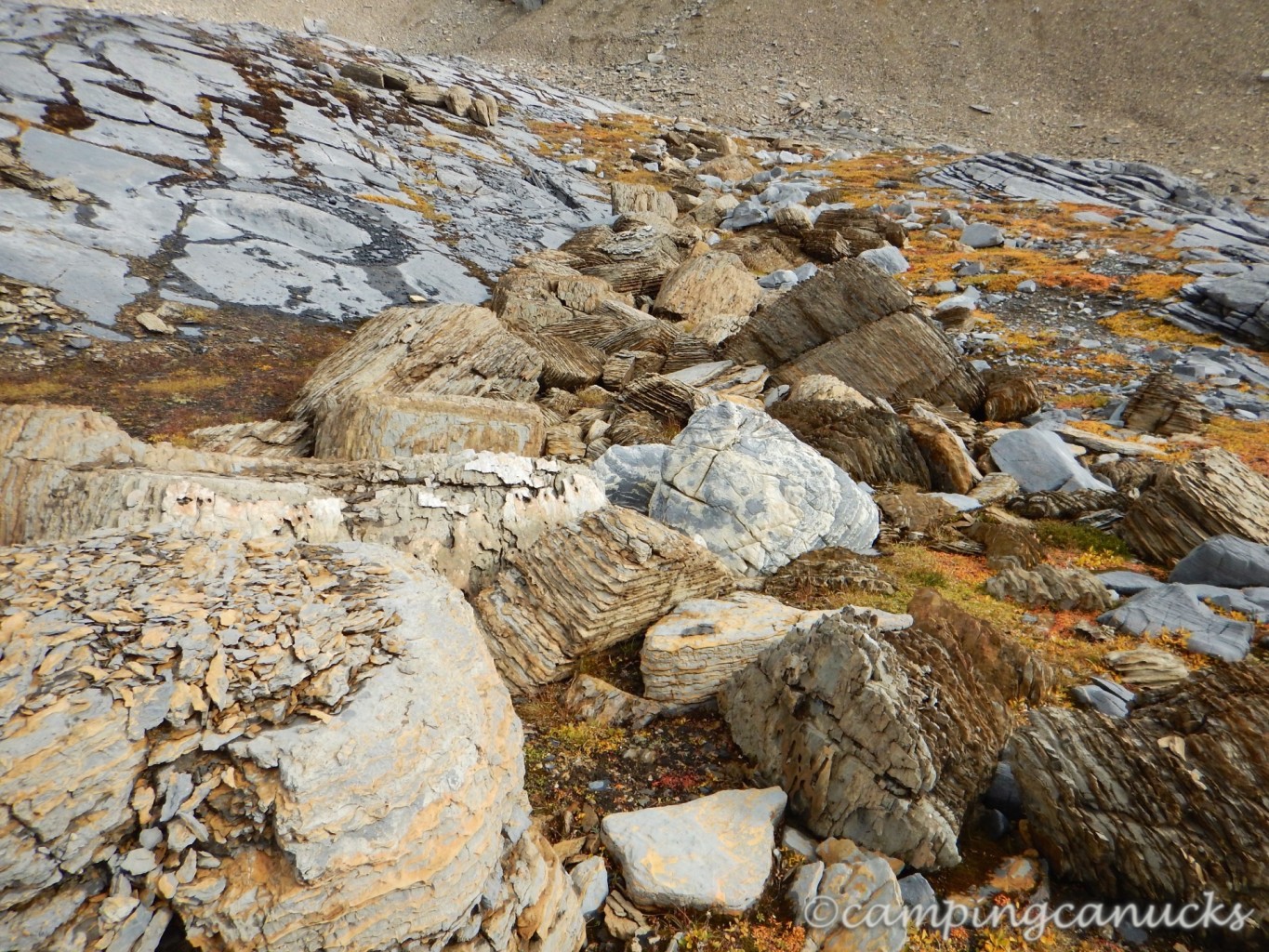 We didn’t get to the top of the glacier as you would need to be equipped with the proper gear but we did get close enough to walk out a bit onto it where it was not very deep and there were no crevasses. But being as cold and wet as it was, we didn’t linger for very long and headed back down to the main trail. 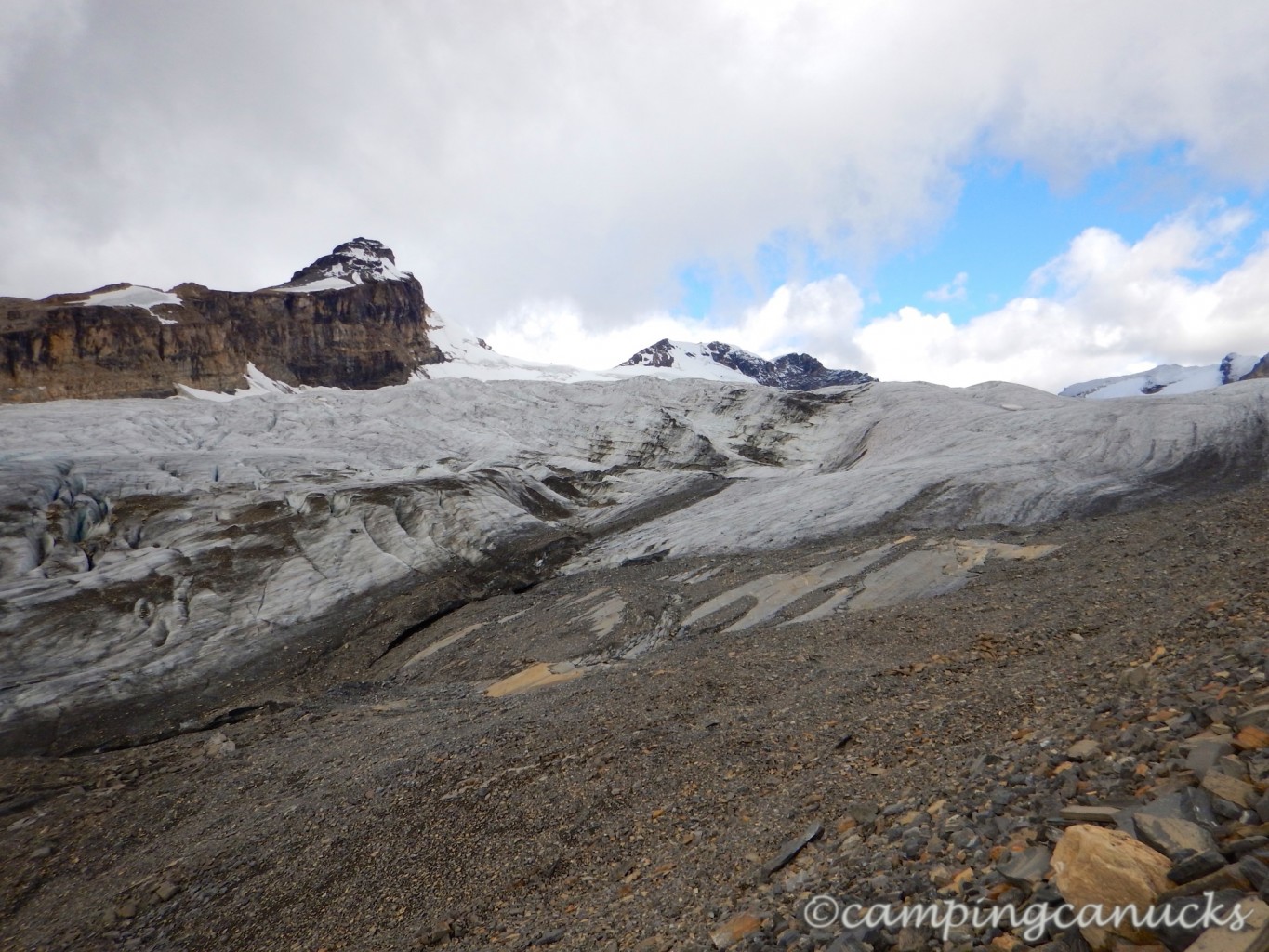 Once back on the main trail we headed east along the Mumm Basin trail. This is a great stretch to get some great views of Robson and Berg Lake although we were rarely able to see Robson’s top as it was usually wrapped in the clouds. 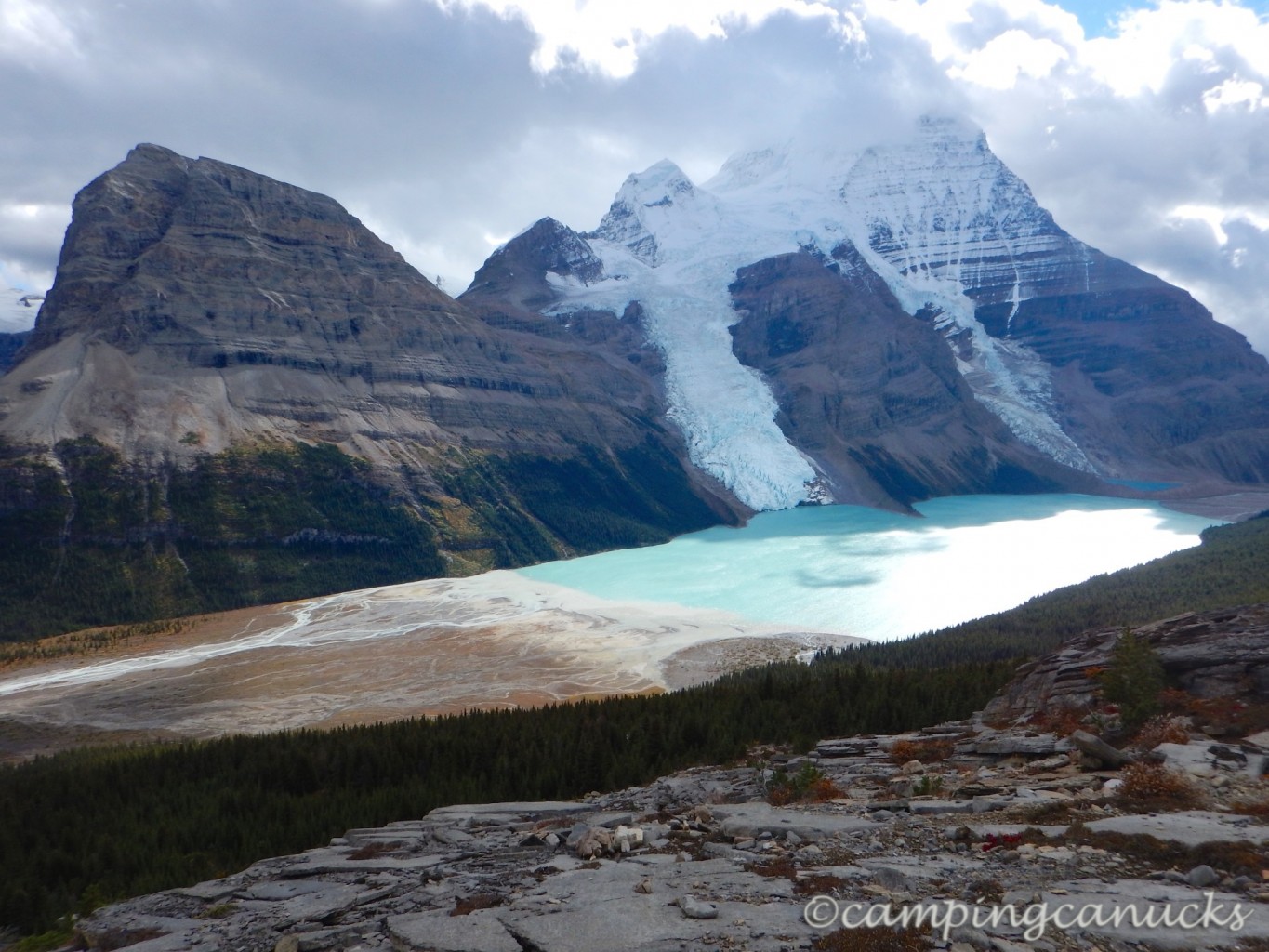 Further along the trail, we got some good views of Robson Pass. From here you can really see just how far the Robson Glacier has receded in the last hundred years. In fact, there is a photo in the shelter taken of the glacier around the early 1900’s in which the glacier reached the valley. Not anymore; now it is several kilometers up the pass and much smaller. 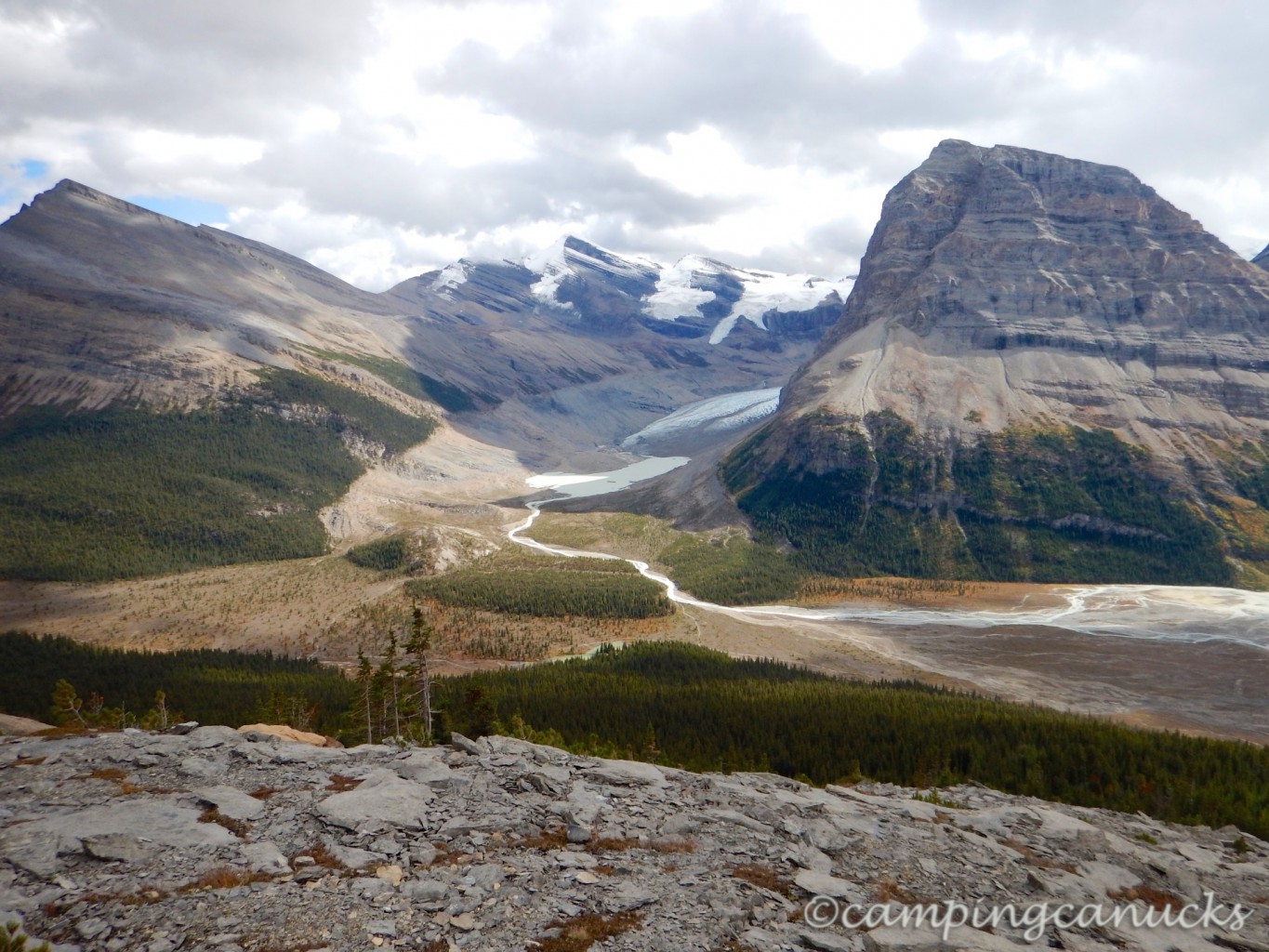 Shortly past this point, you reach the end of the alpine section of the Mumm trail and begin the knee grinding descent back down to the valley. 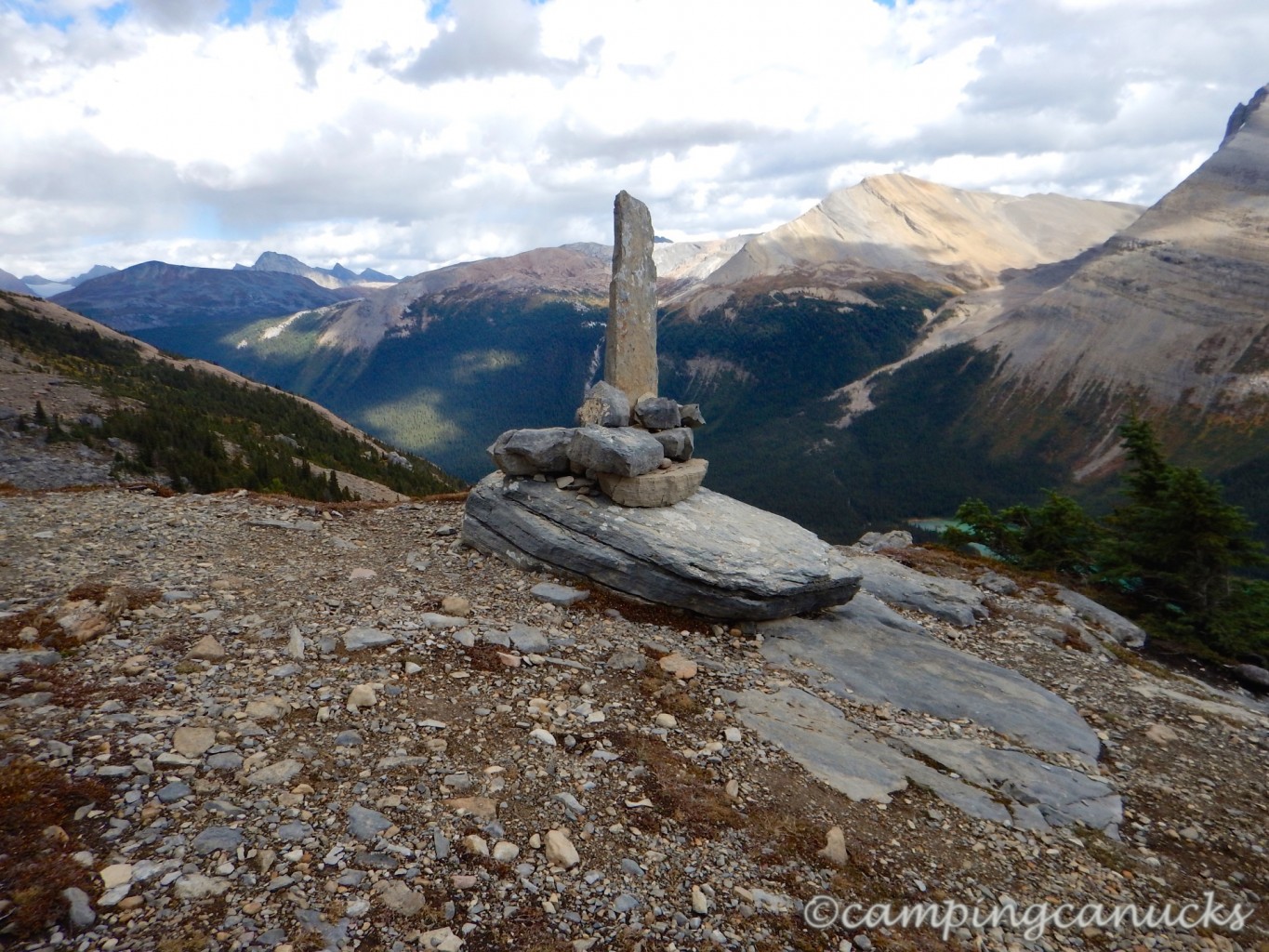 End of the line

The trail passes through one of the last of Robson Park’s sites, which is the Robson Pass camp. We have not stayed here but there is a nice covered shelter with plenty of wood so it would be a good alternative to the Berg Lake site if that other site were really busy.  I saw one couple camping there and I’m sure they were enjoying the peace and quiet of having this area to themselves. Heading along the trail back to Berg Lake, we also passed the park ranger’s cabin. We had seen them riding by in the rain the previous day on their horses, on their way down. 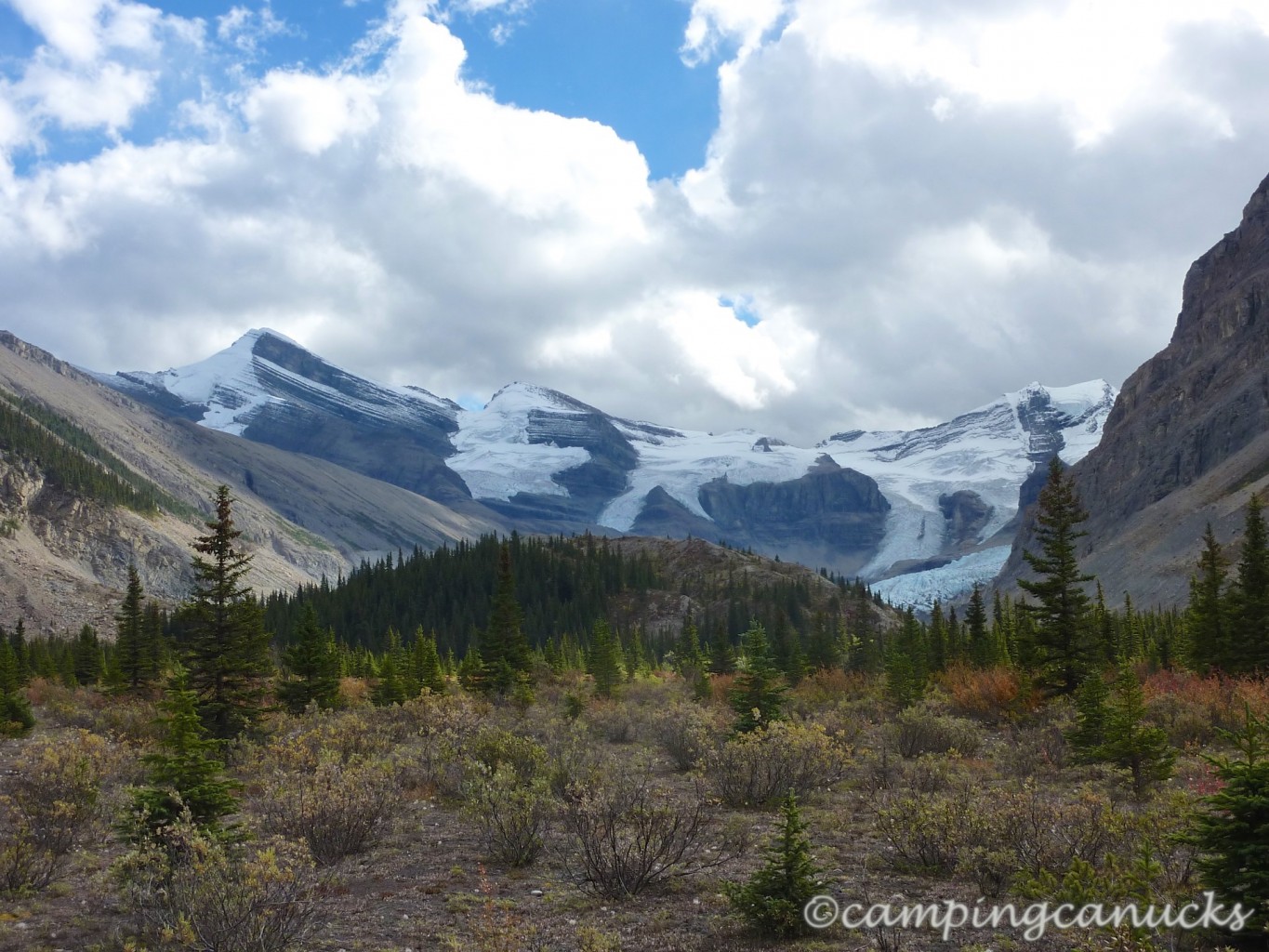 Last view of Robson Pass from the valley

We look forward to making this trip again someday as there is still plenty to be explored. Ultimately, we would like to tackle the entire Moose River route which starts in Jasper Park and exits at Robson.

This is definitely one of the crown jewels of the Canadian Rockies as evidenced by the numbers of foreign backpackers we met who were drawn here from around the world. And it’s right in our backyard.