The Berg Lake Trail in Mount Robson Provincial Park is considered one of Canada’s premier Rocky Mountain trips. Do a search online for it and you’ll get loads of info, pictures, and glowing reviews about how you MUST do this trail. My first time up there came about in September 2010 when I loaded on up with Kirk for three days/two nights on the Berg Lake Trail. Being that we went up after September 15, there was no need to reserve beforehand. If you going during the peak months, though, you will need to get a backcountry pass from the parks website. Of course, going later in the season increases the risk of snow but luckily for us, it was clear the whole time, although the temperature did dip into the negative double digits at night.

From the parking lot to Kinney Lake is a relatively easy hike that lasts about 7km with some moderate elevation gain. People are allowed to bike up to Kinney Lake, where there are bike stands for people to lock their bikes up. This makes a day trip quite accessible for those who pedal up to continue on foot up to Berg Lake. There is a relatively nice campsite at Kinney but we were pressing on as we had a site waiting for us at the Whitehorn campground, which is about 12km from the parking lot. Once you get past Kinney Lake, you hit the first big elevation gain and climb over 1100 meters for the next while until you hit the Valley of a Thousand Falls, where it flattens out quite a bit. 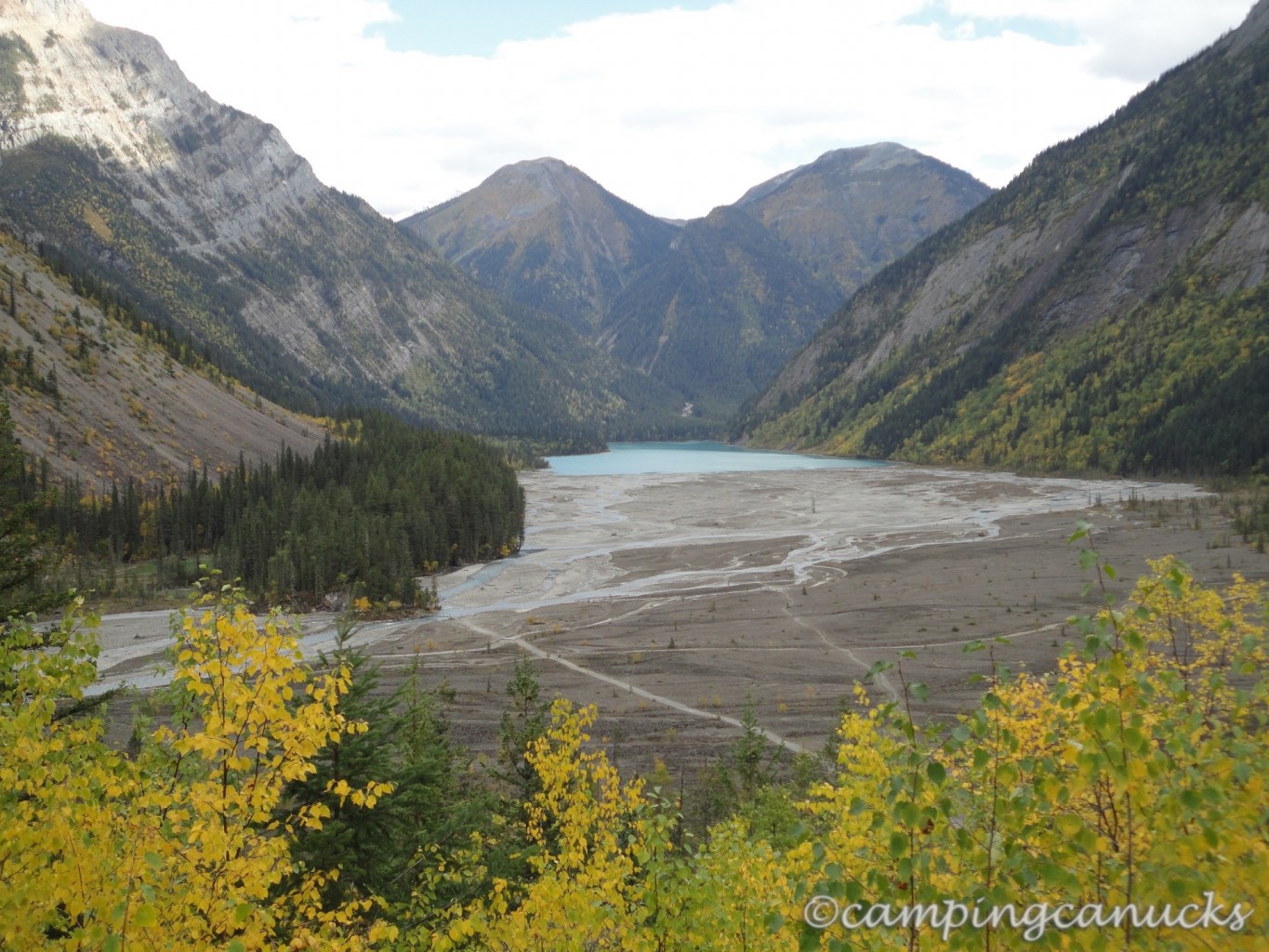 Looking back at Kinney Lake

A few kilometers down the trail from the climb, we crossed the Robson River again and arrived at the Whitehorn site, so called because of nearby Whitehorn Mountain. This was also a nice site with a sweet little cooking shelter that had a wood burning stove. As night fell, almost everyone who was not curled up in their tent was at the shelter around the fire to keep warm. 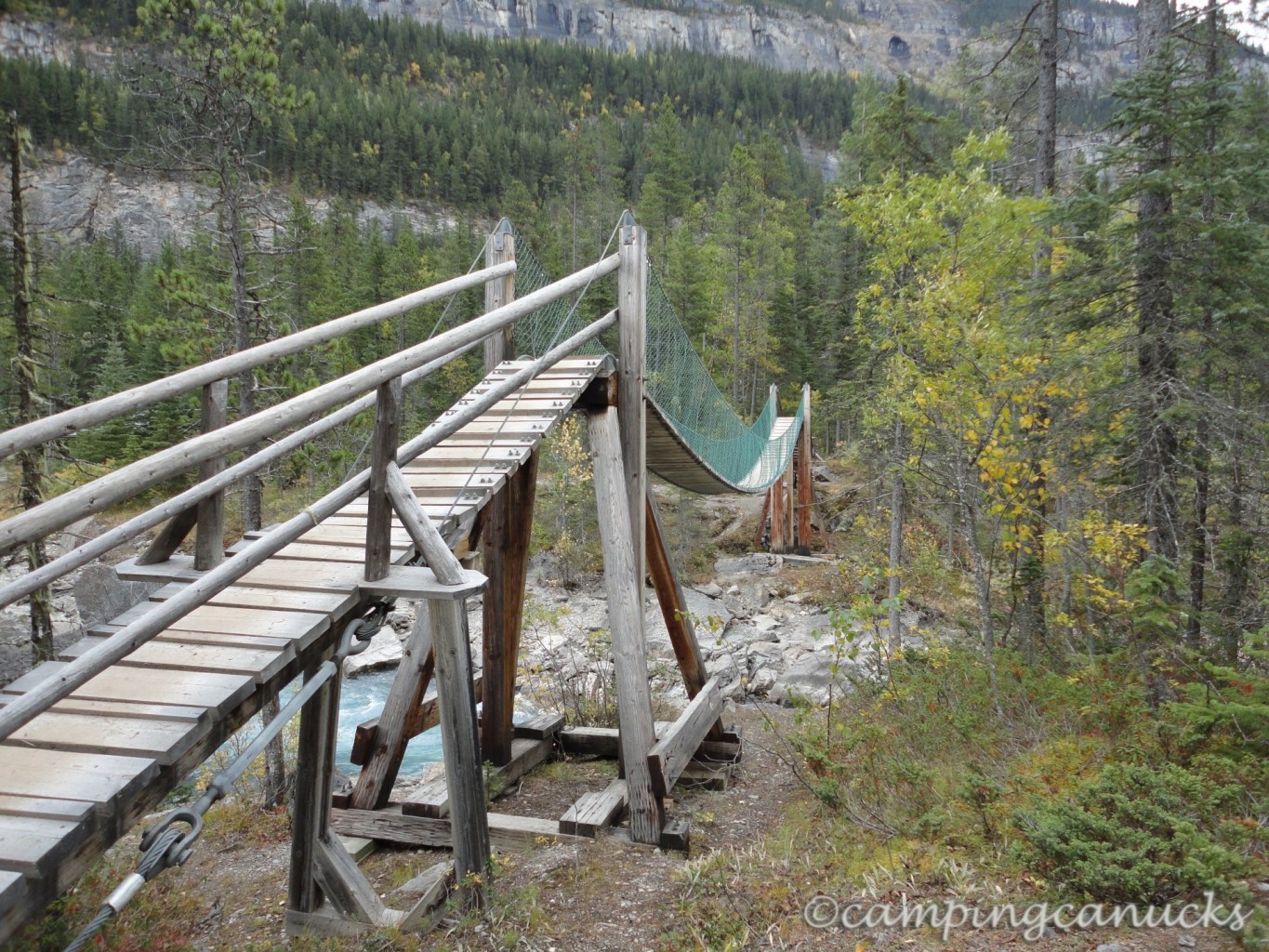 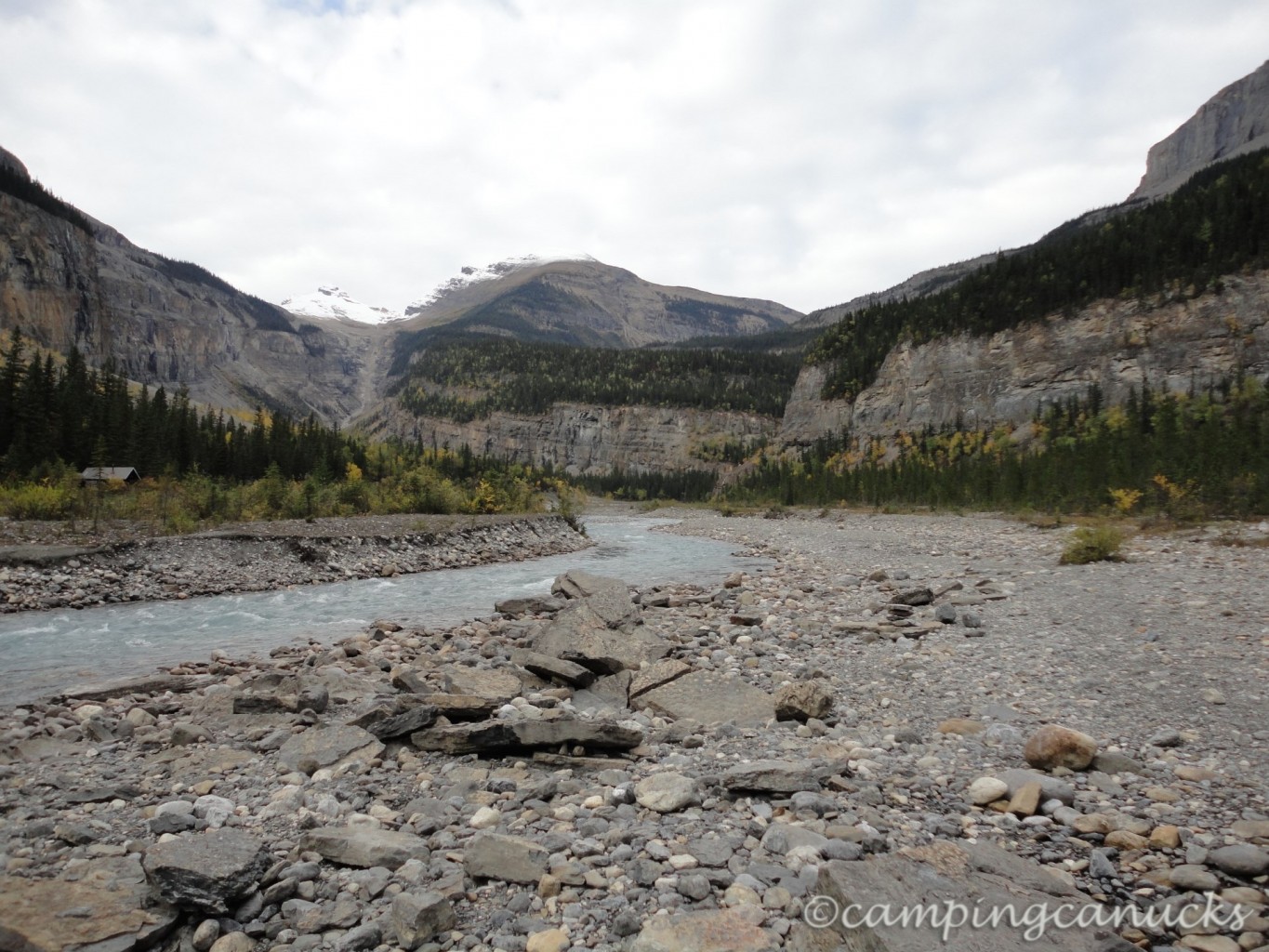 View of Whitehorn and the Valley of a Thousand Falls

After a solid night’s sleep, we were off for the final push to the top. Since we had covered most of the distance the day before, we had less than 10km to get to the Berg Lake site. But between us and the lake we had the still climb up past Emperor Falls. This was the next big climb and again, you gain about a 1000 meters elevation over the next 4km. There were certainly some steep sections and a few stops to ‘enjoy the view’. Once you reach Emperor Falls, then it becomes clear sailing from there. 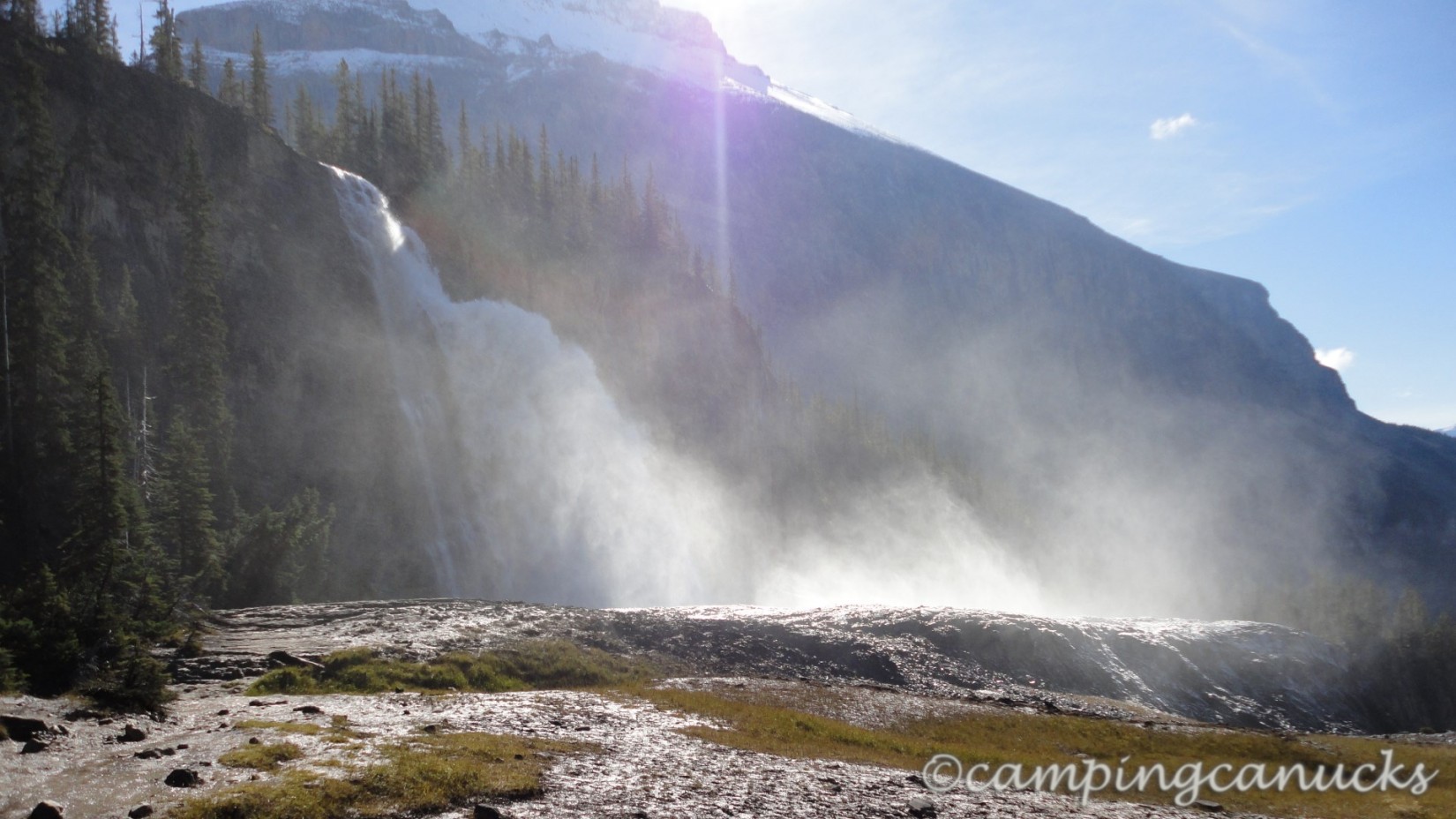 After following the Robson River for a few more kilometers, the real oohing and ahhing begins once you catch views of Berg Lake and Rearguard Mountain. 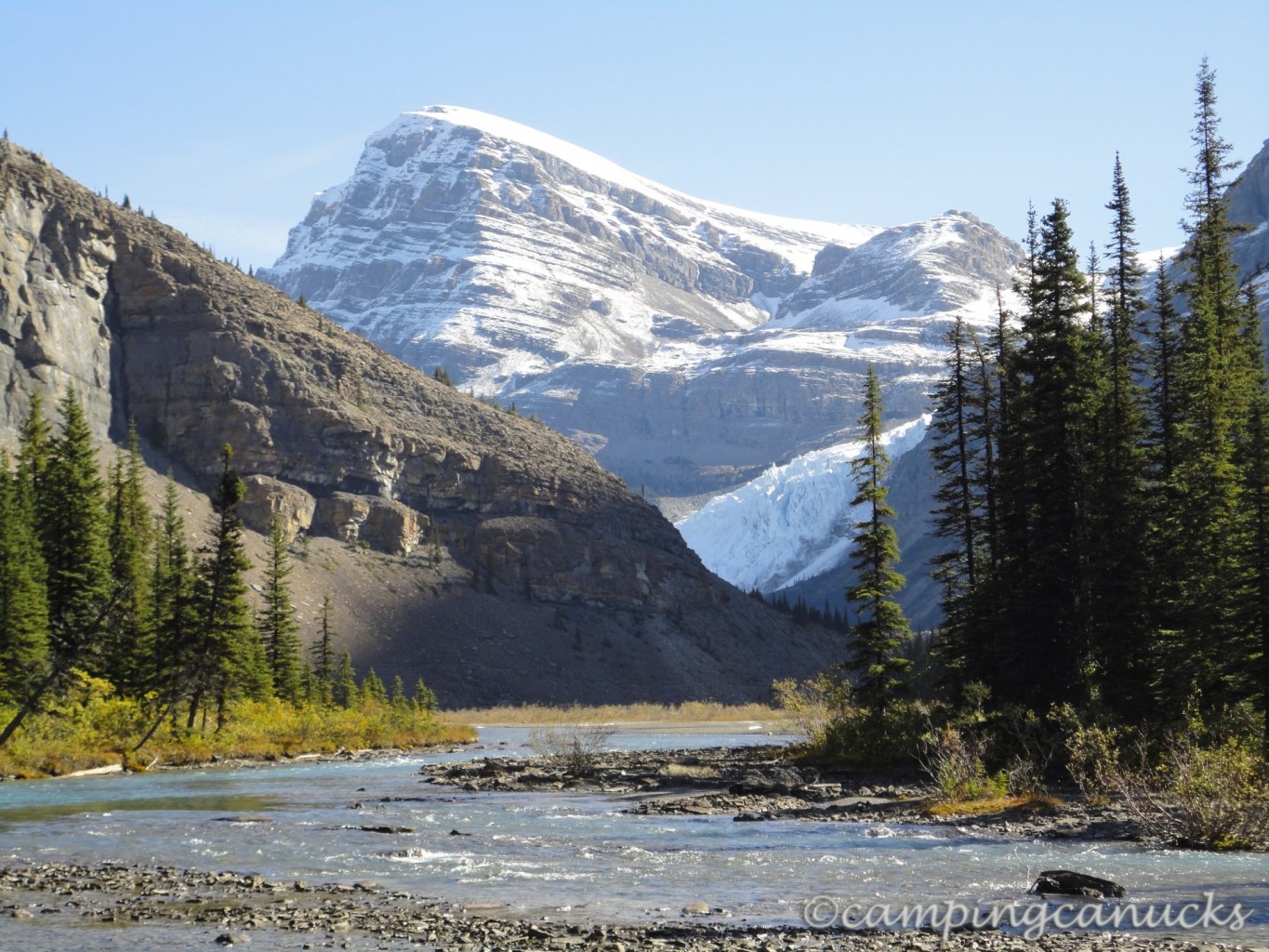 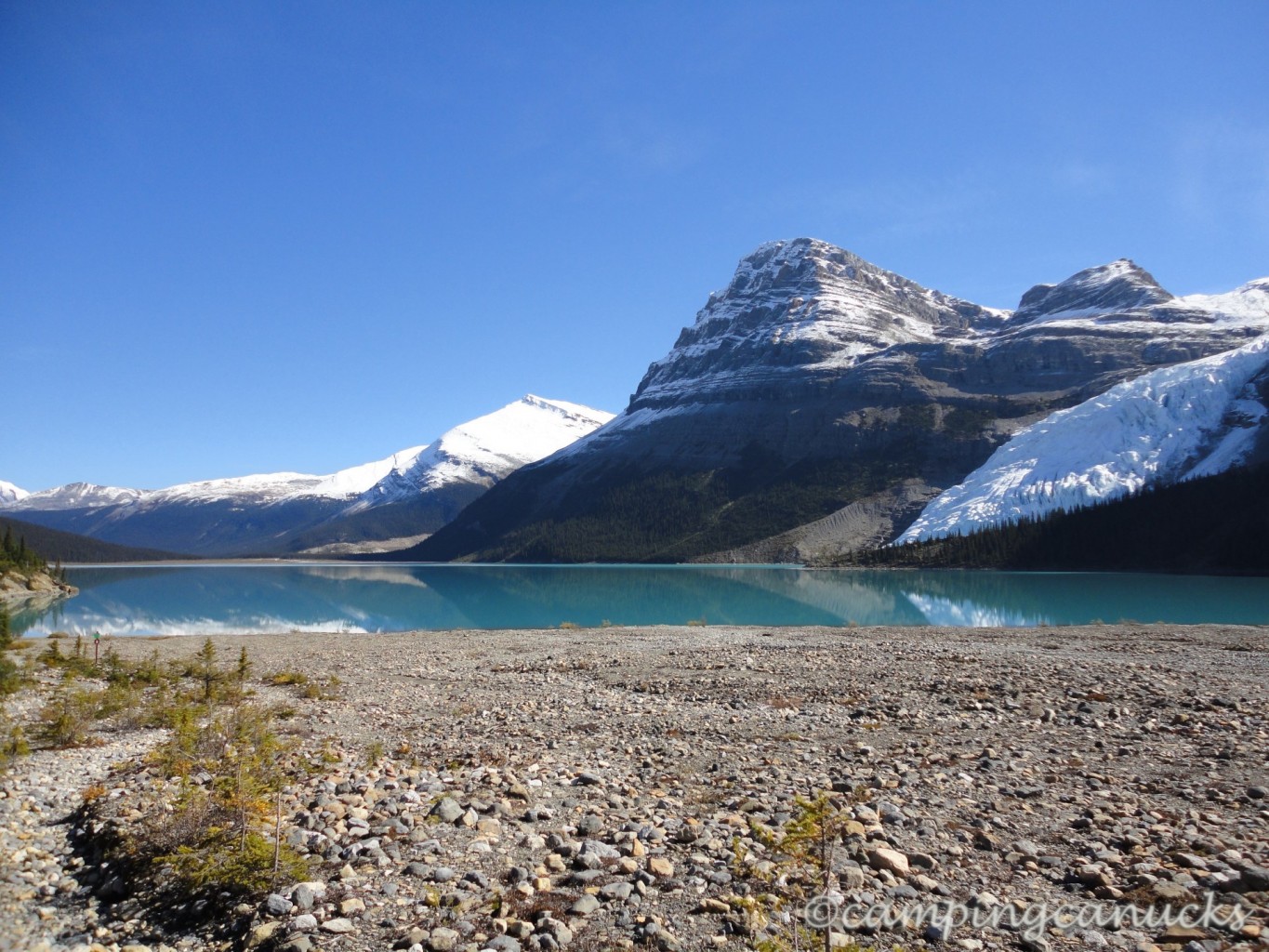 There is another camp, Marmot, on the west side of Berg Lake but we kept on going just drinking in the views as we proceeded along the lake. 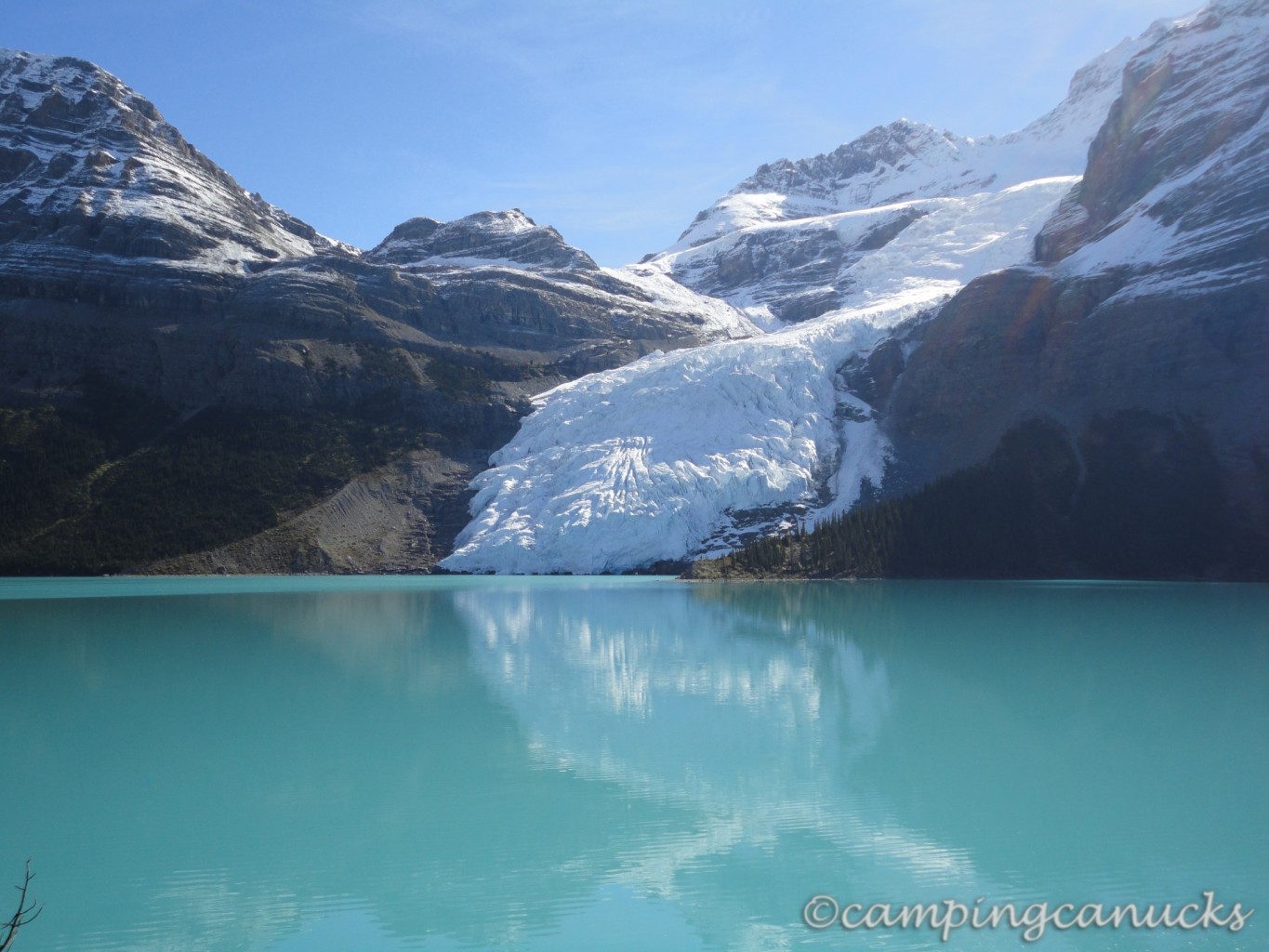 The Berg Glacier spilling into the lake

After a bit of time, we arrived at the Berg Lake site with its renowned Hargreaves Shelter. Built in the 1920’s, people are not allowed to sleep in the shelter but with a wood fireplace inside, it makes a great place to relax and cook meals. And to read and play cards. 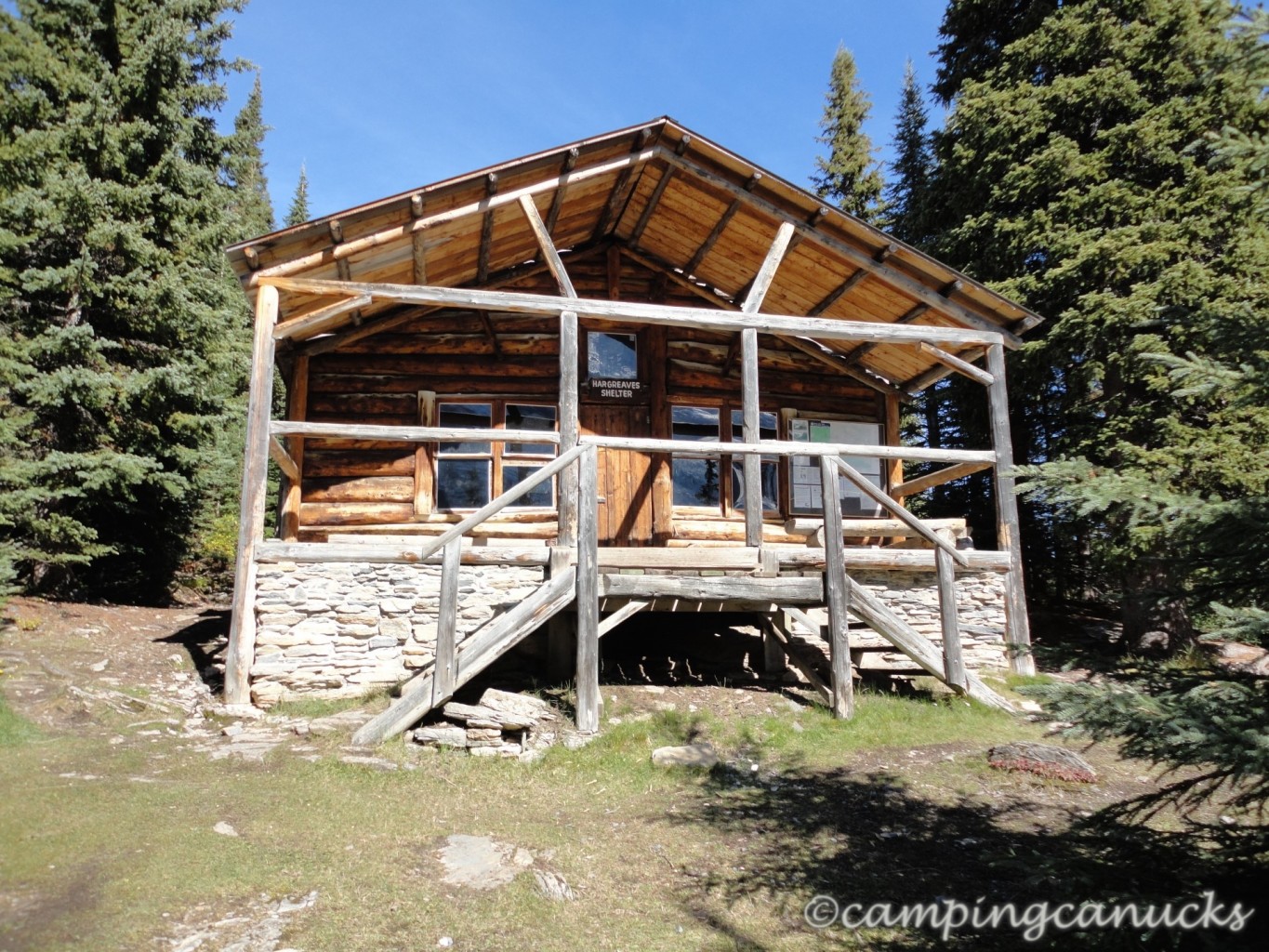 After securing ourselves a tent pad and filling up with some lunch, it was time to do some exploring. There are a number of great day trips from this site; Snowbird Pass, Adolphus Lake, and others. Being that we had arrived a bit late, we didn’t really have the time to tackle a 20km day trip at this point so we decided to head up the Toboggan Falls Trail, where one can get some great views of Robson and Berg Lake.

While the Toboggan Falls Trail is not very long, coming in around 3km, it makes up for it in steepness. It was almost like doing 3km of stairs with grades sometimes exceeding 40%! But the views certainly made up for it as we continued upwards. 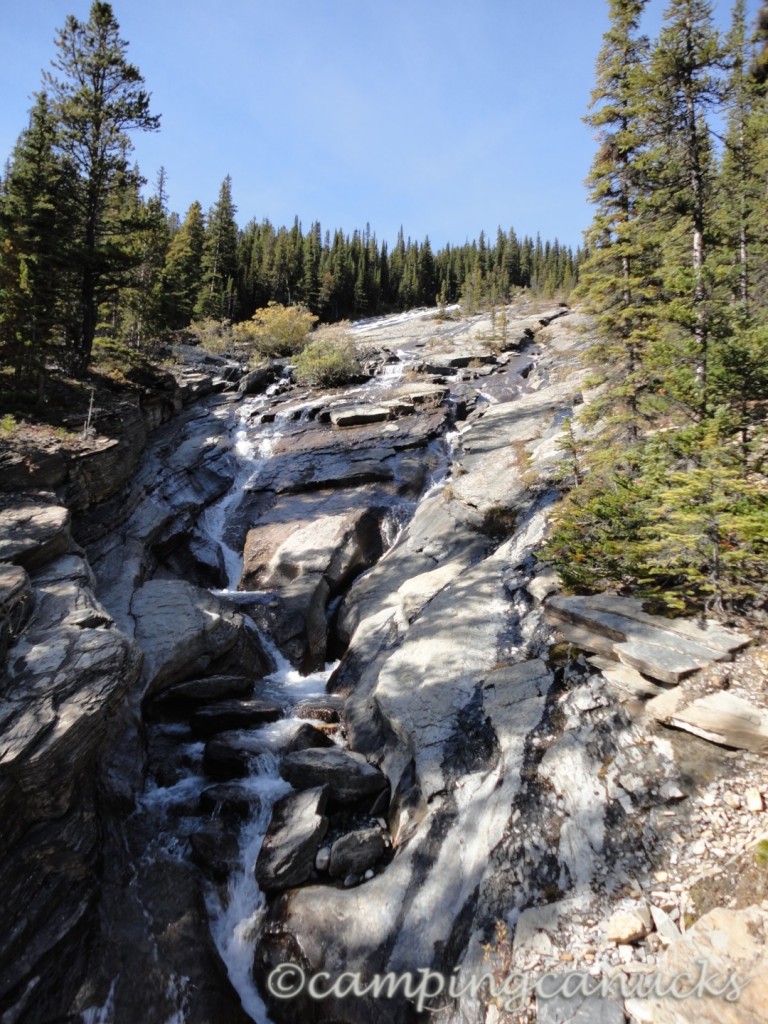 A section of Toboggan Falls

Once past the falls, you are now above the tree line with some great views in all directions. Of course, there is one view that stands above all the rest. 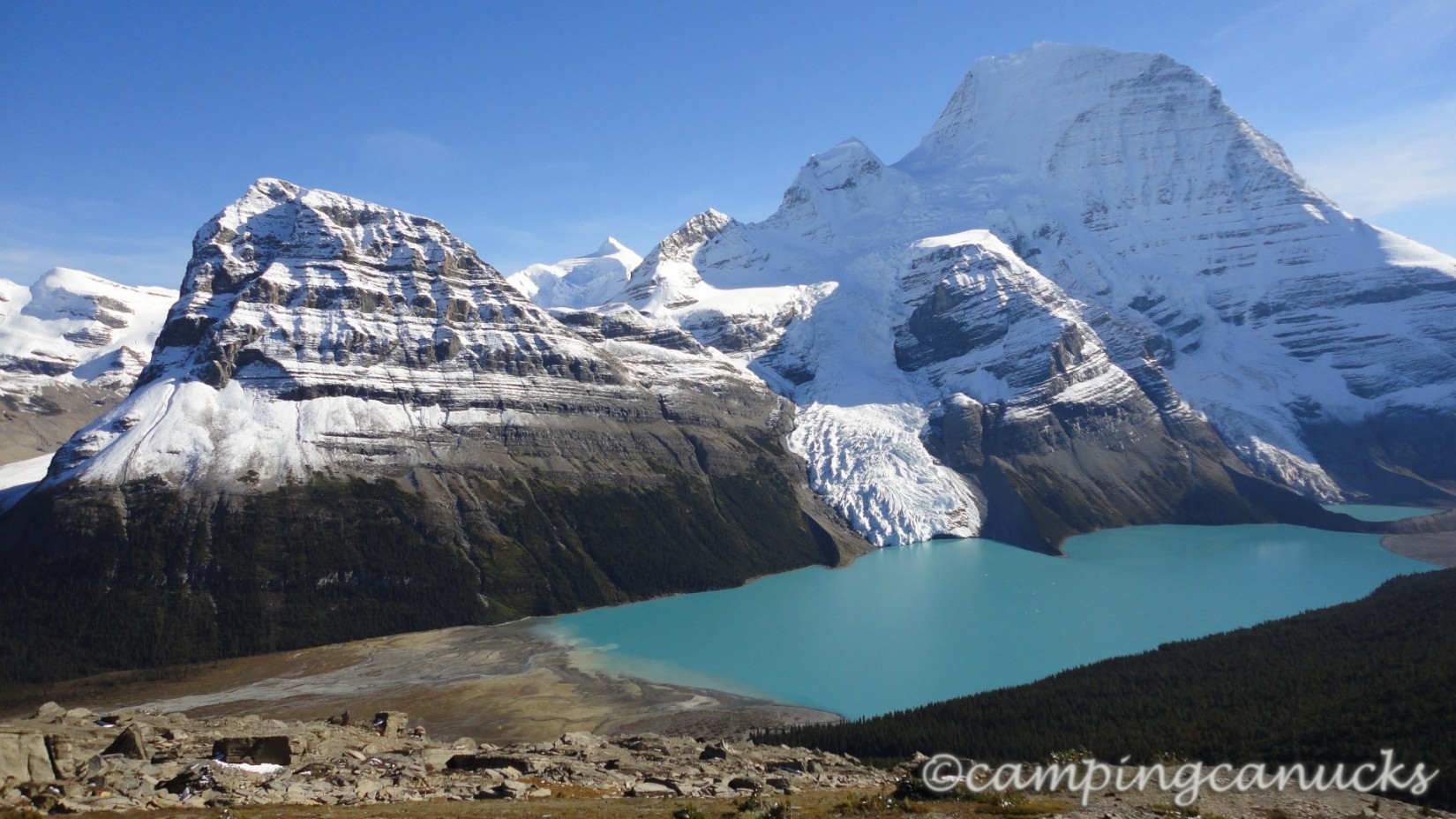 The trail continued on until it ended at a cave. The cave appears to have been formed by very large slabs of rock moving around over the years until gaps have formed between the various layers. All in all, it was pretty cool. It’s not a very long or deep cave but it was interesting nonetheless to wander around in by headlamp. 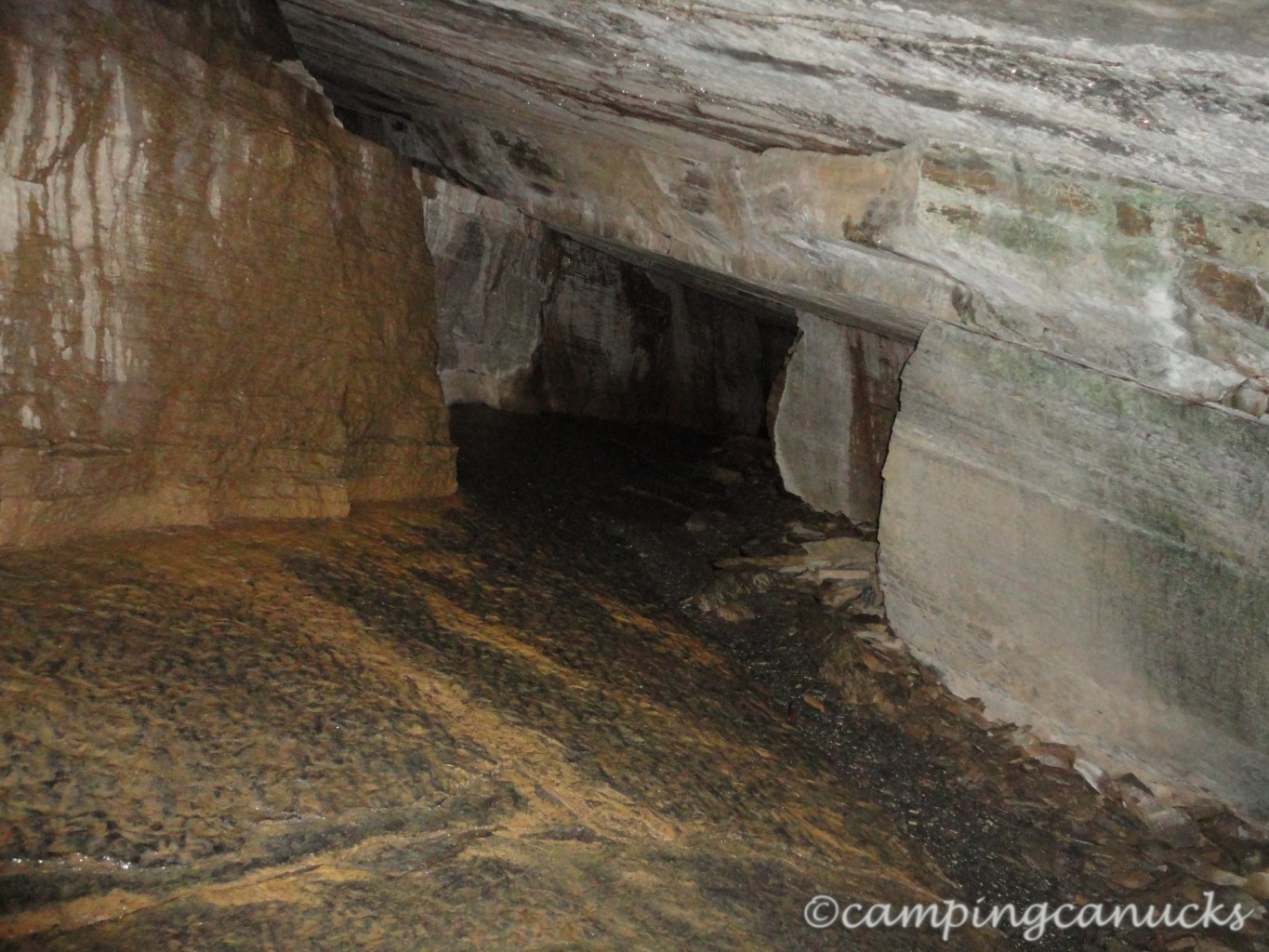 After hanging out for awhile and enjoying the views, it was time to get back. We met others coming up the trail, gasping for breath, and asking if they were near the top. We assured them they were, and continued our knee grinding descent back to camp. Once down, we hung out by the lake for a couple of hours and relaxed in the last light of day before retreating to the shelter for dinner and cards. Once the sun set, the temperature quickly dropped below zero, so it was quite nice to hang out in the shelter with its wood stove. 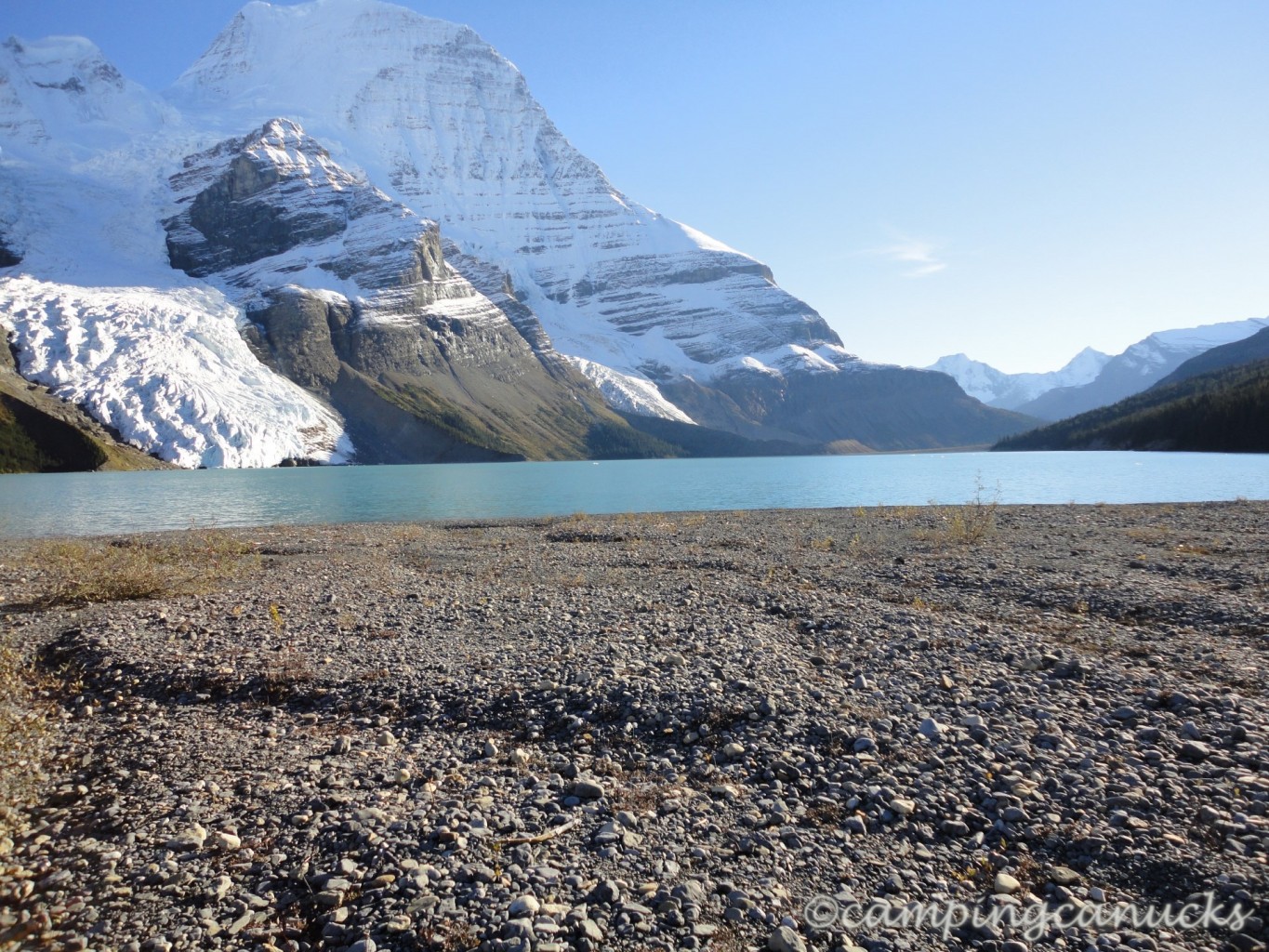 Robson from the east side of Berg Lake

Come morning, after scraping the ice off of the tent, we quickly packed up and had ourselves some breakfast. We loaded up our packs and headed on our way down while an angry squirrel barked at our intrusion on his space and sent us off with a scolding. It would have been nice to have at least another day but that’s the way of the weekend warrior who holds down a day job. 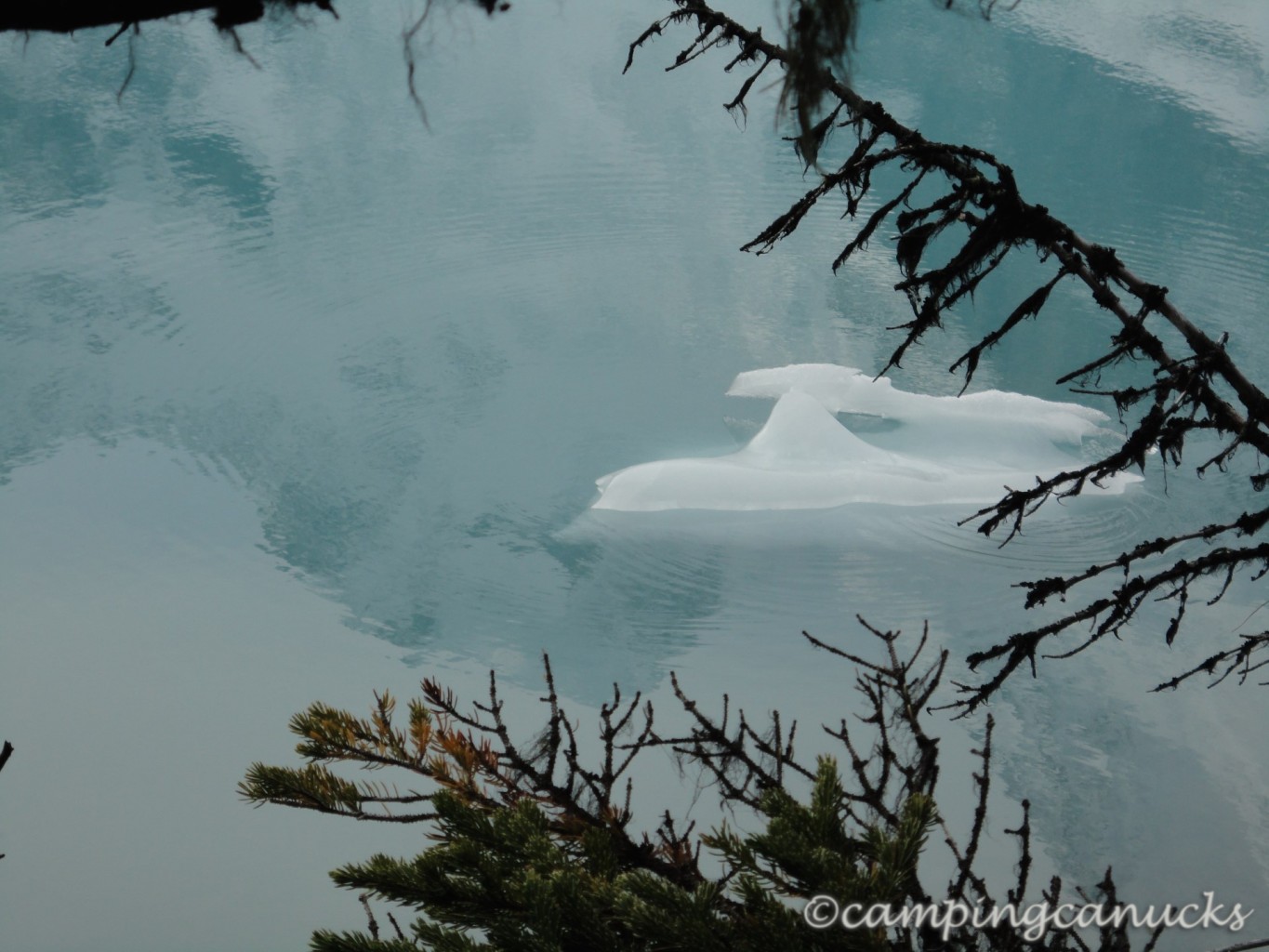 Where the lake got its name

Going back was pretty well down all the way and we made great time. We had also talked to a man we met along the way who informed us of a shortcut north of Kinney Lake that saved us a bit of time. And had a great conversation at lunch at the Whitehorn camp with a man from Israel who was carrying a backpack that was bigger than he was! He did tell us that he had just finished serving in their army and didn’t consider the pack much of a load. I guess they breed tougher men than me in Israel.

Robson was a great way spend three days, especially with perfect weather. I will be doing this trip again in September 2014 and we will be having more days up at Berg Lake, which will give us more time to explore.

So after all is said and done, Robson does live up to its reputation as one of the premier hikes of the Canadian Rockies.